Horse Island is a low-lying, undisturbed and uninhabited island. This little Scottish island sits under the shadow of Ben Mhor Coigach and is said to hide Spanish treasure.

Horse Island is one of the first islands on the way out of Loch Broom from Ullapool. Like many Scottish islands Horse island has no census record but there are some local accounts of habitation in the early 19th century.

The island is made of Torridon Sandstone and started life near the equator as the landmass we know and love as Scotland was making its long slow geological journey northwards. The island is yet another wonderful example of un-grazed deep grass, heather, mosses, cotton grass, lichens and wild flowers.

I have had several landings on Horse Island but 3rd July 2017 as a special day. It was part of my Summer Isles Six, when on one day I was to summit six islands. Trade Winds was anchored under Meal an Fhitich cliffs (G. – raven’s hill) and settled nicely in very light airs. The trip to the islands summit Sgurr nan Uan (G. – conical hill of the lambs) at 60m was enjoyable and challenging. Running and striding out in deep mattress soft mosses and grass had me tumble on many occasions as my landing foot disappeared into a rut or hidden stream.

The top is a wonderful plateau of grass that shimmered in the lifting breeze. The sandstone showing through the surface vegetation is covered in the most wonderful lichens and mosses of all colours.

It is folklore that a ship from the Spannish Armada was wrecked on the shores but despite hopes being raised in the 19th centaury when a gold doubloon was accidentally found there remains no further sign of any treasure.

The only sign of human endeavour to be seen on the island is the cairn at the summit and low stone walled shelter for past resident sheep. Wild goats are said to live on the island but I certainly did not spot any signs on my whistle stop visit. The vital sign mof ‘poops’ on bare stones was not evident. Perhaps proof of goats being longstanding residents is the fact that the adjoining islet Meal nan Gabhar is in Gaelic – hill of the she goats.

I decided to include the neighbouring island Meal nam Gabhar on the single trip so I carefully scrambled over the seaweed covered boulders that dry at low water so providing a connection between the two islands.

Faced with unpassable sheer rocks I found a narrow crack in the rocks and clambered up to yet another wonderful small plateau of grass and heather. My arrival on the top was heralded by circling squawking gulls, clearly not used to humans on their isle.

With the top done it was back down the steep grass chute and down to sea level followed by a quick paddle back out the waiting Trade Winds. 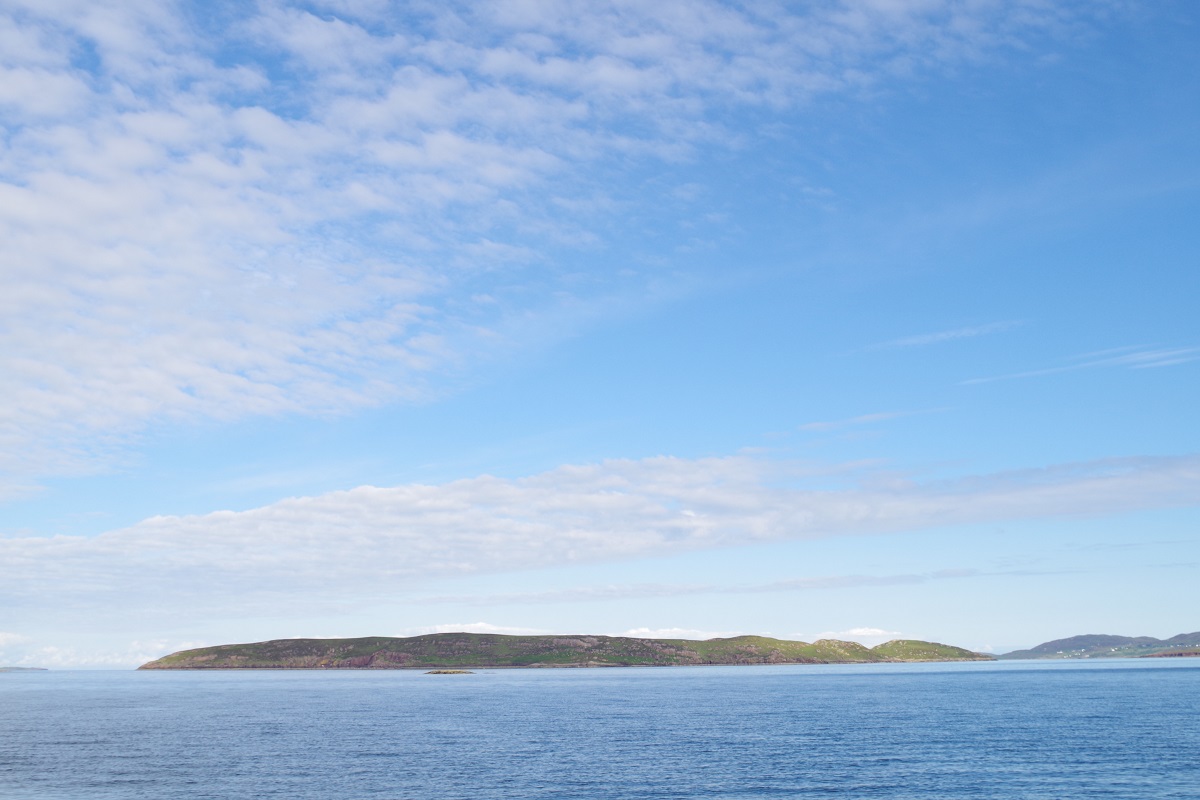 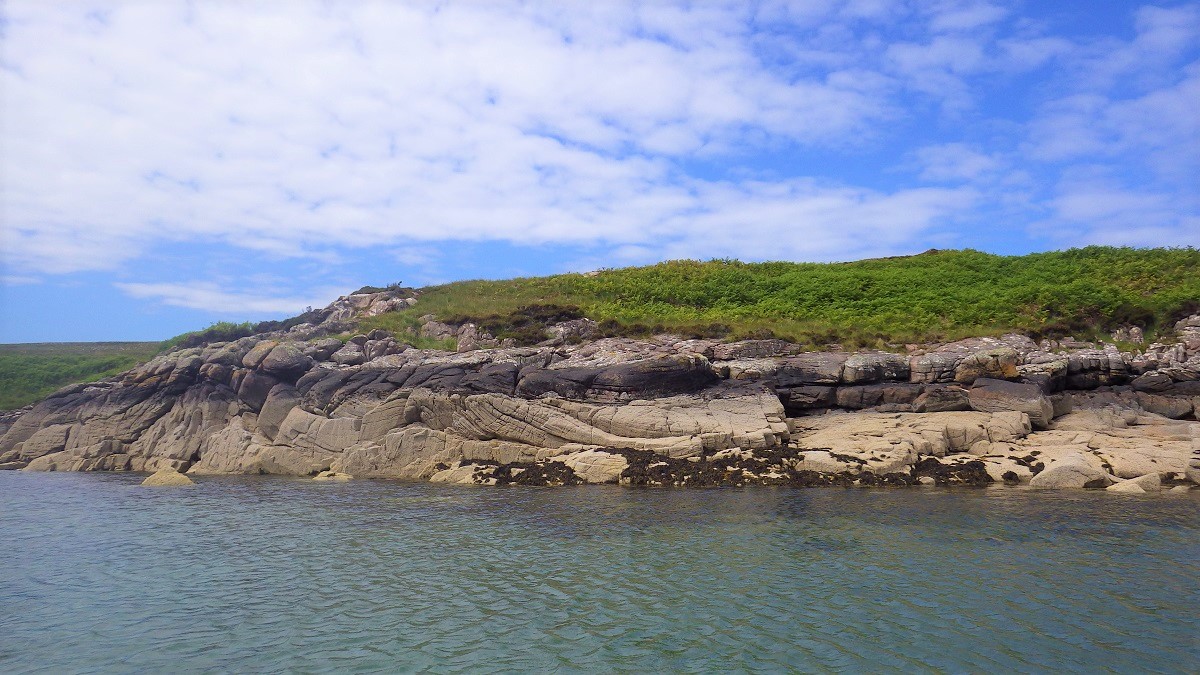 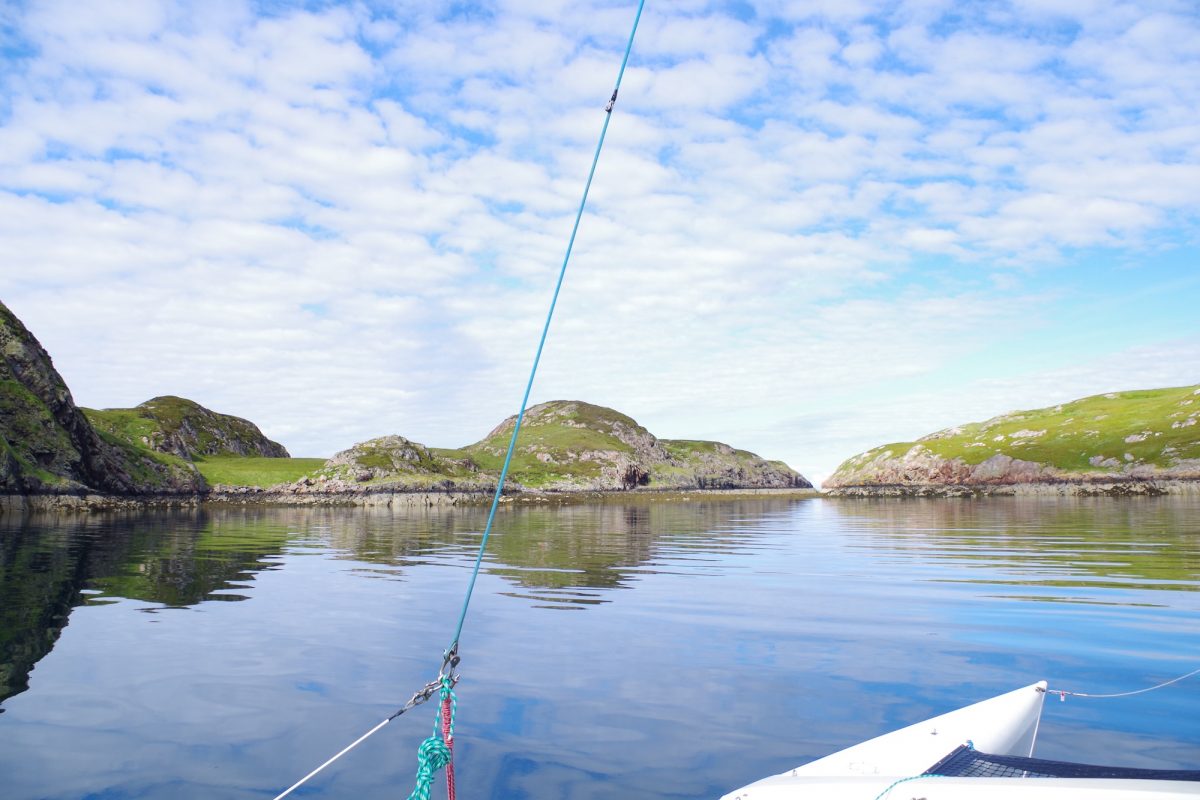 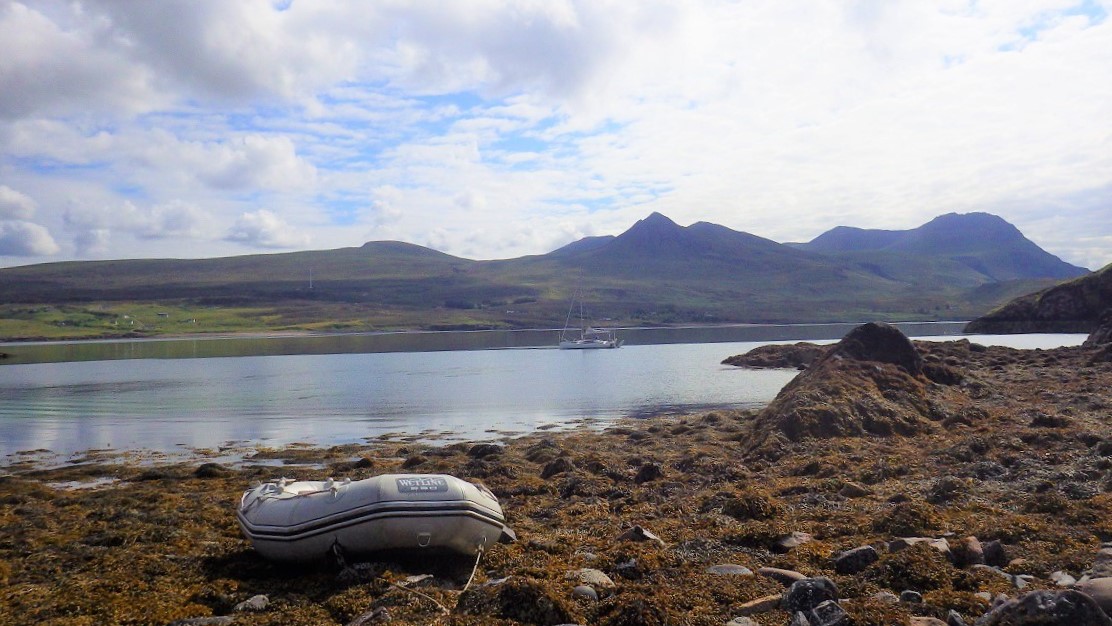 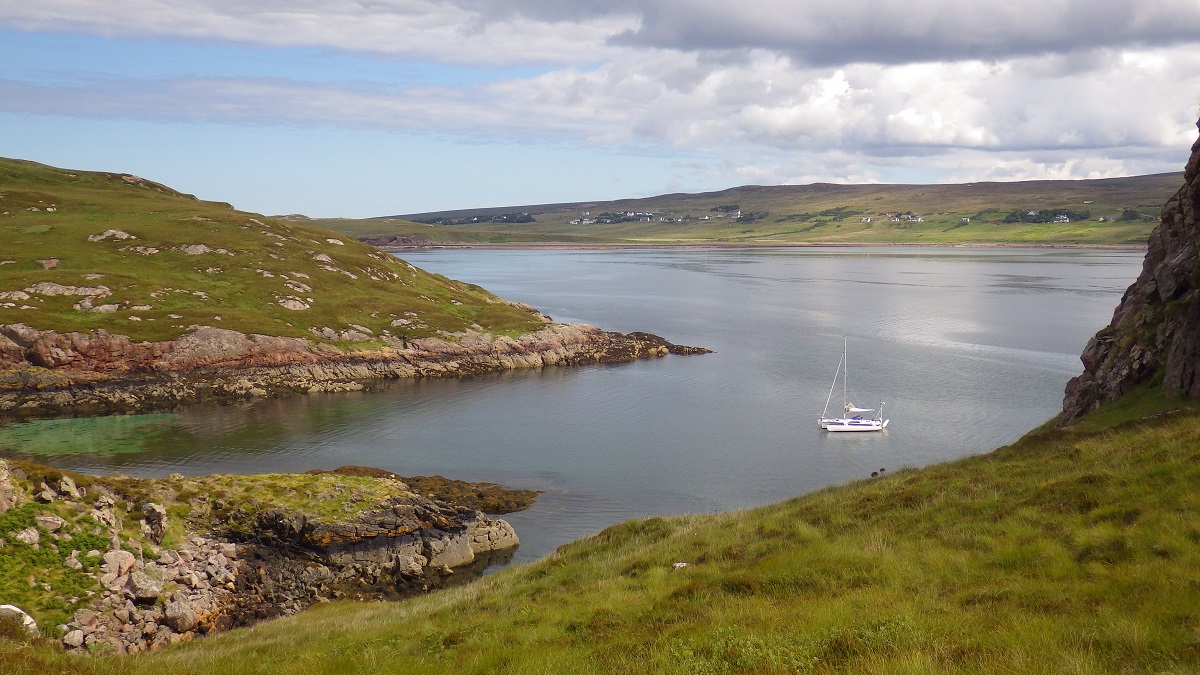 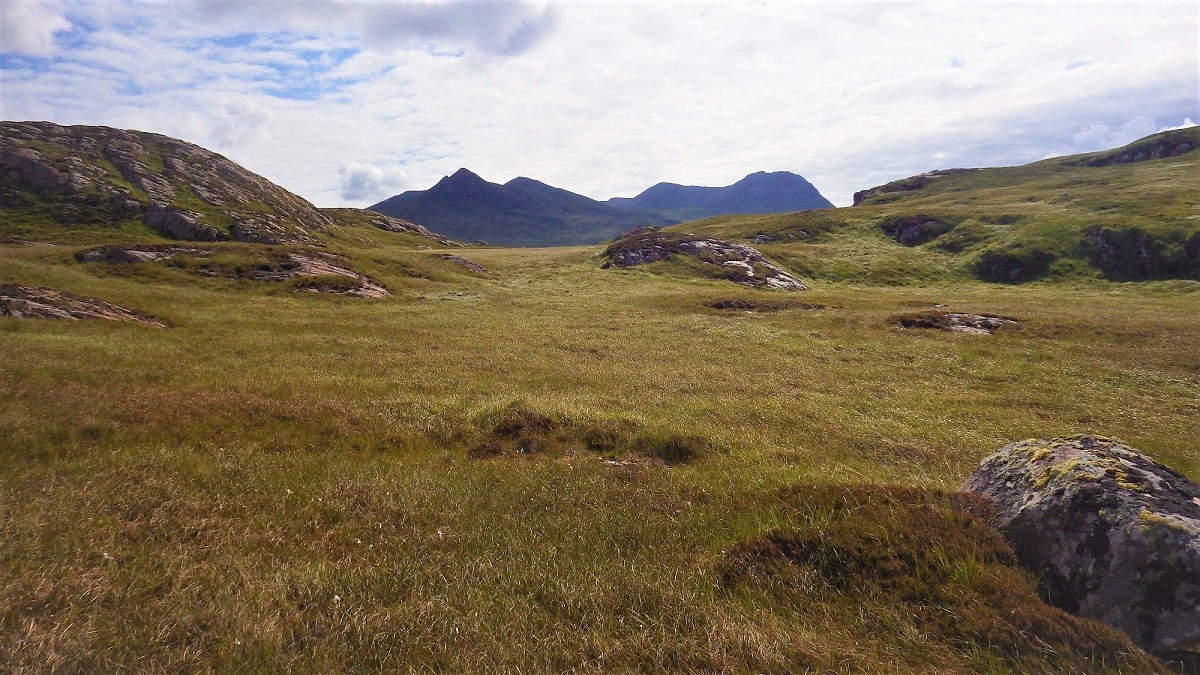 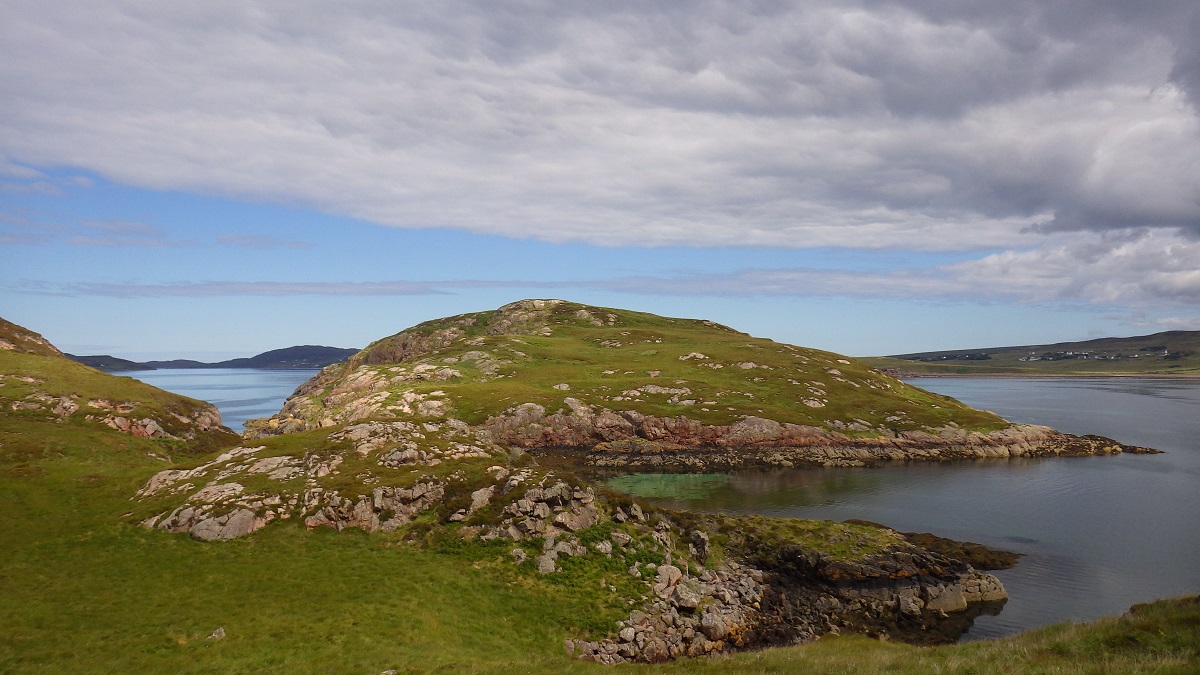 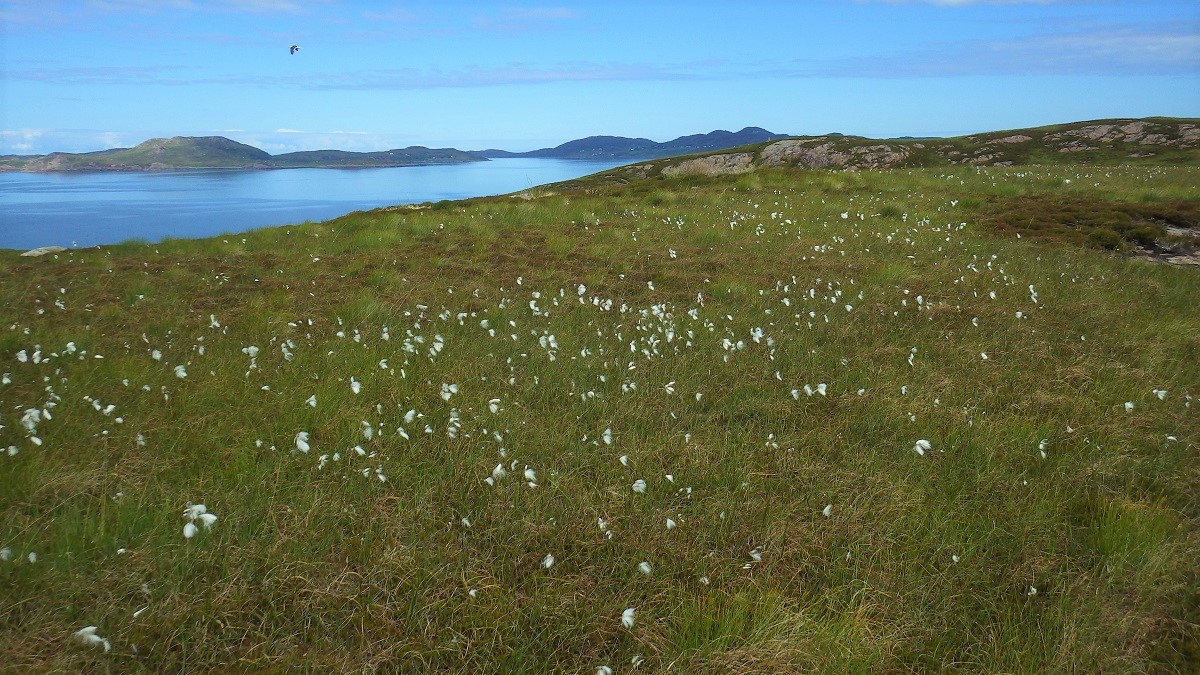 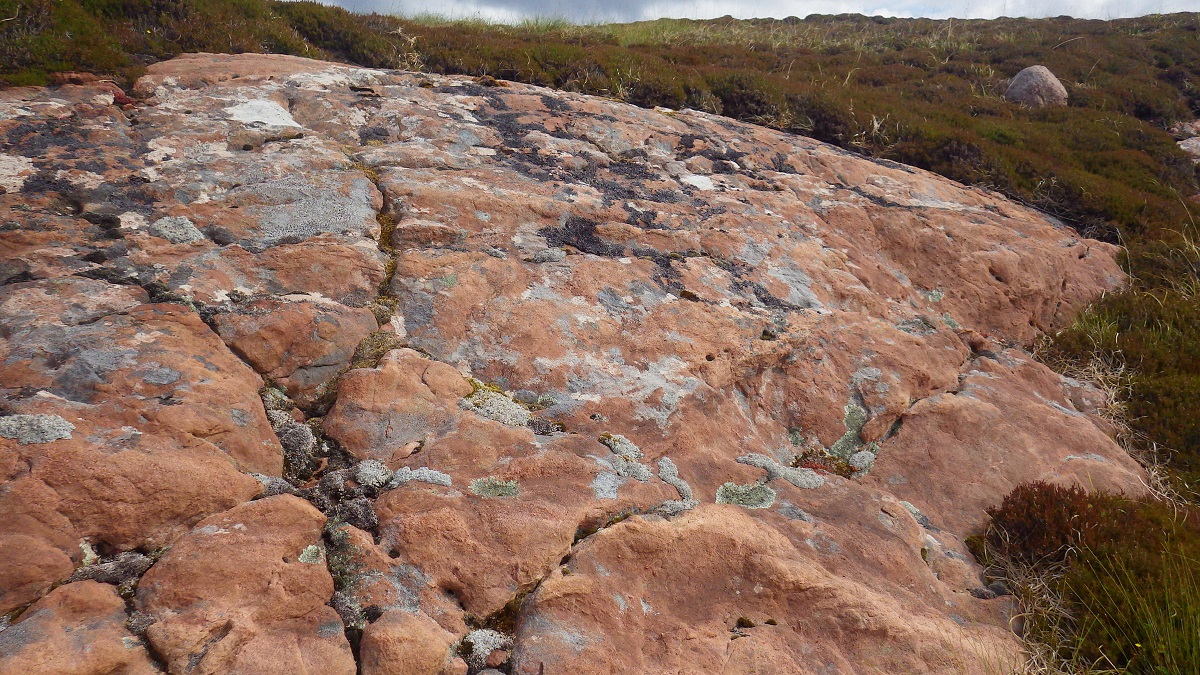 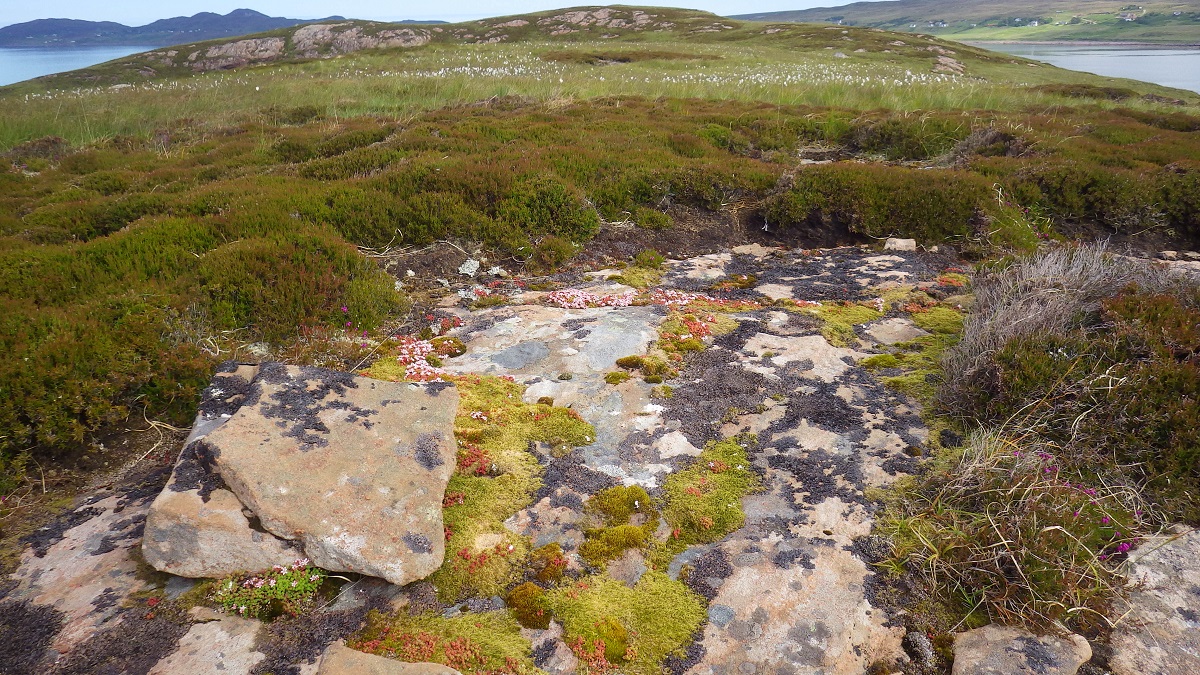 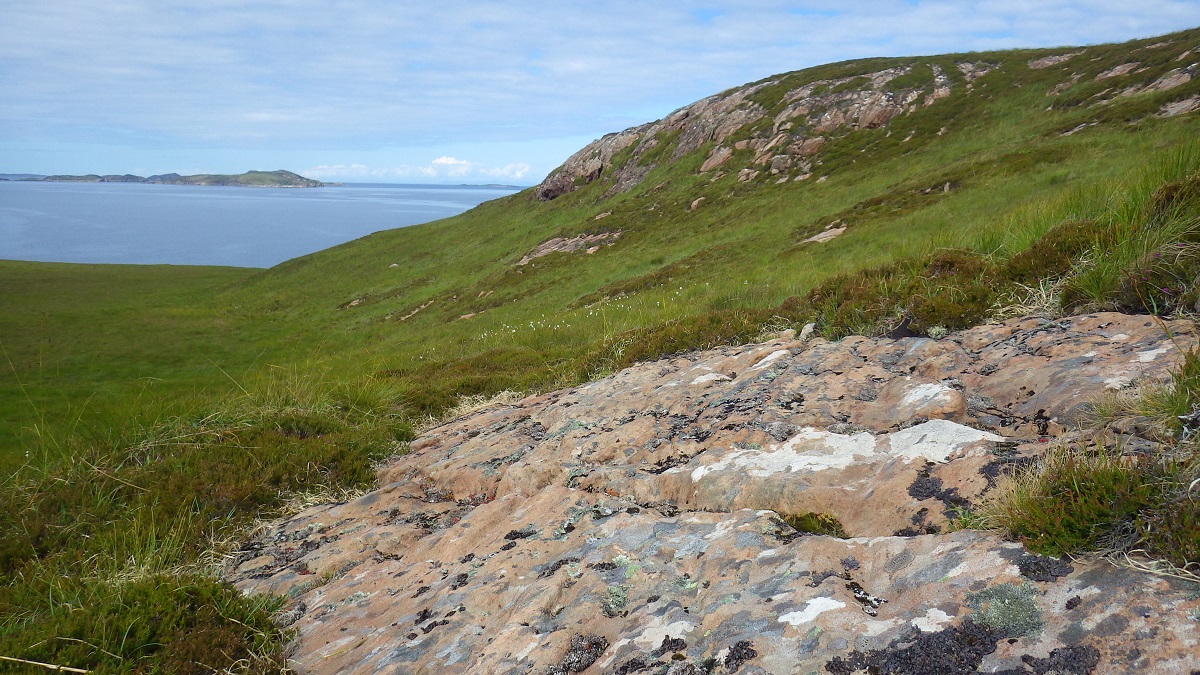 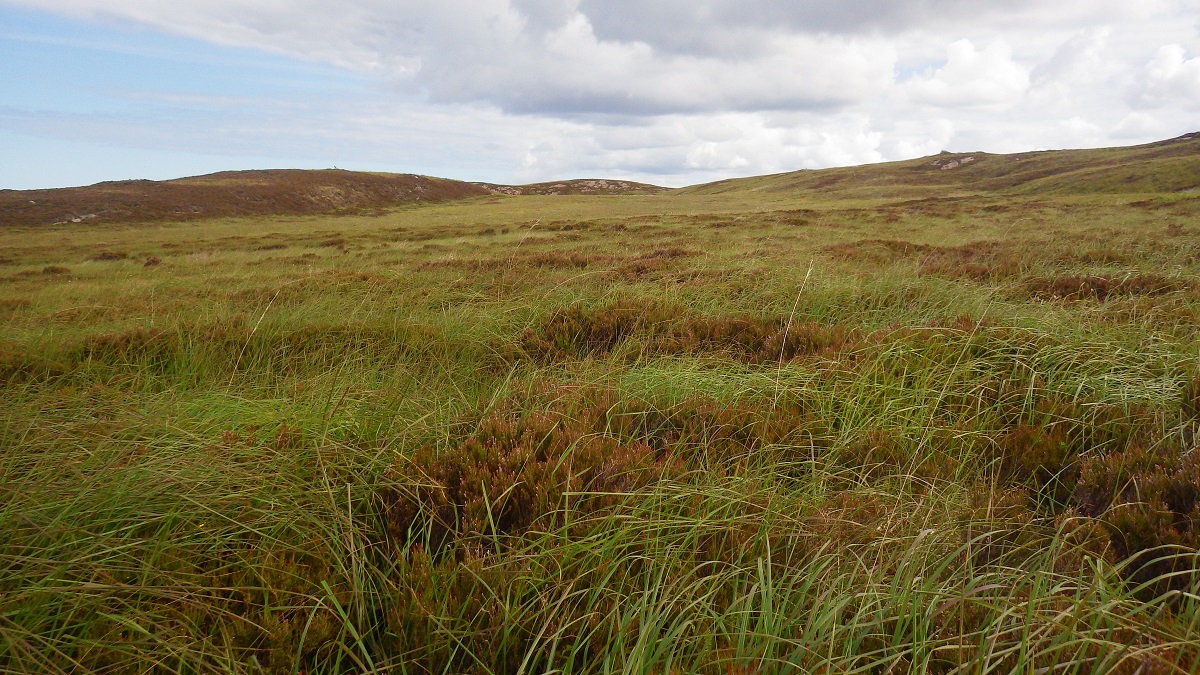 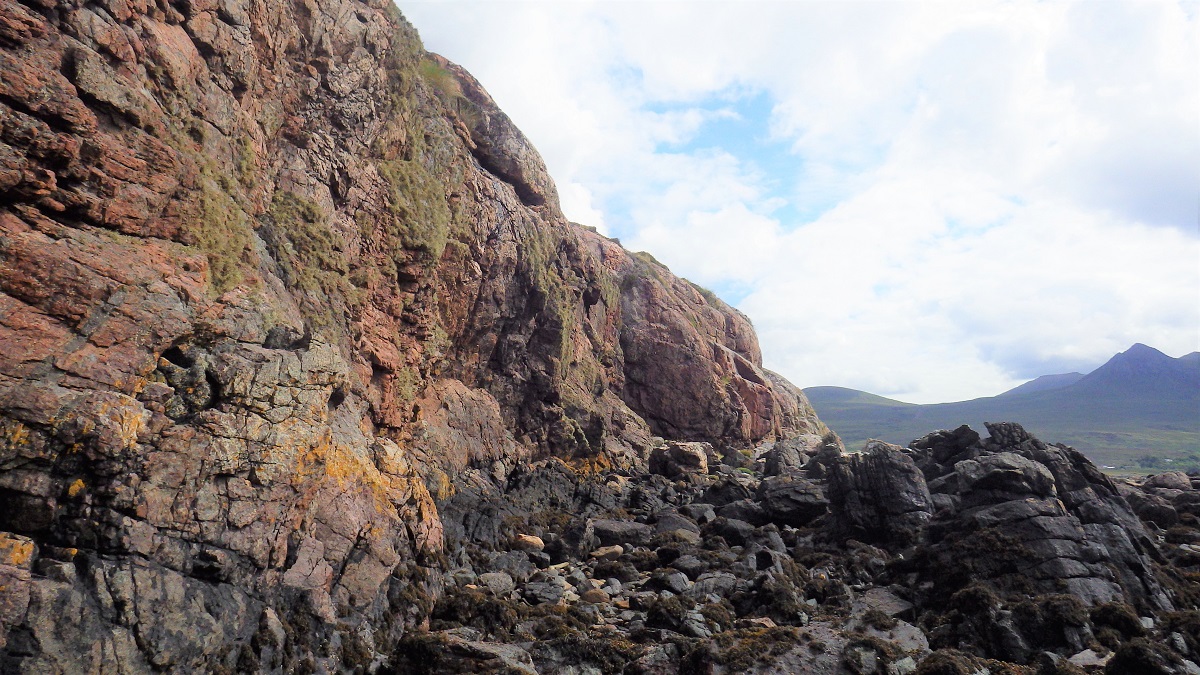 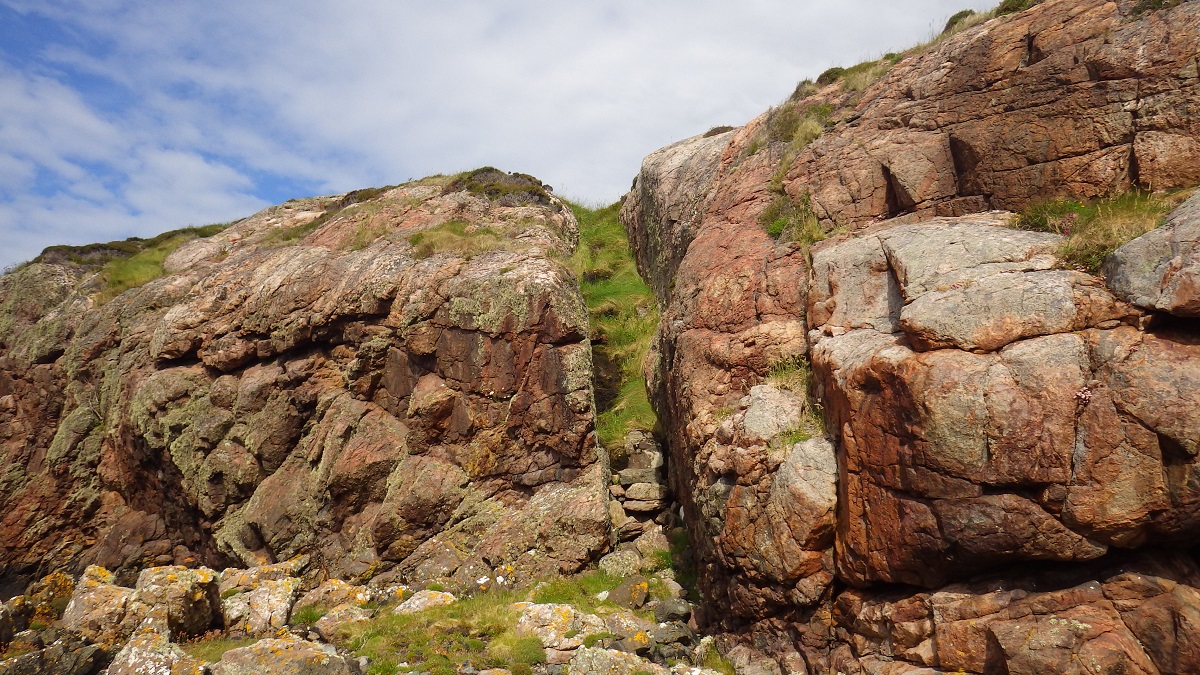 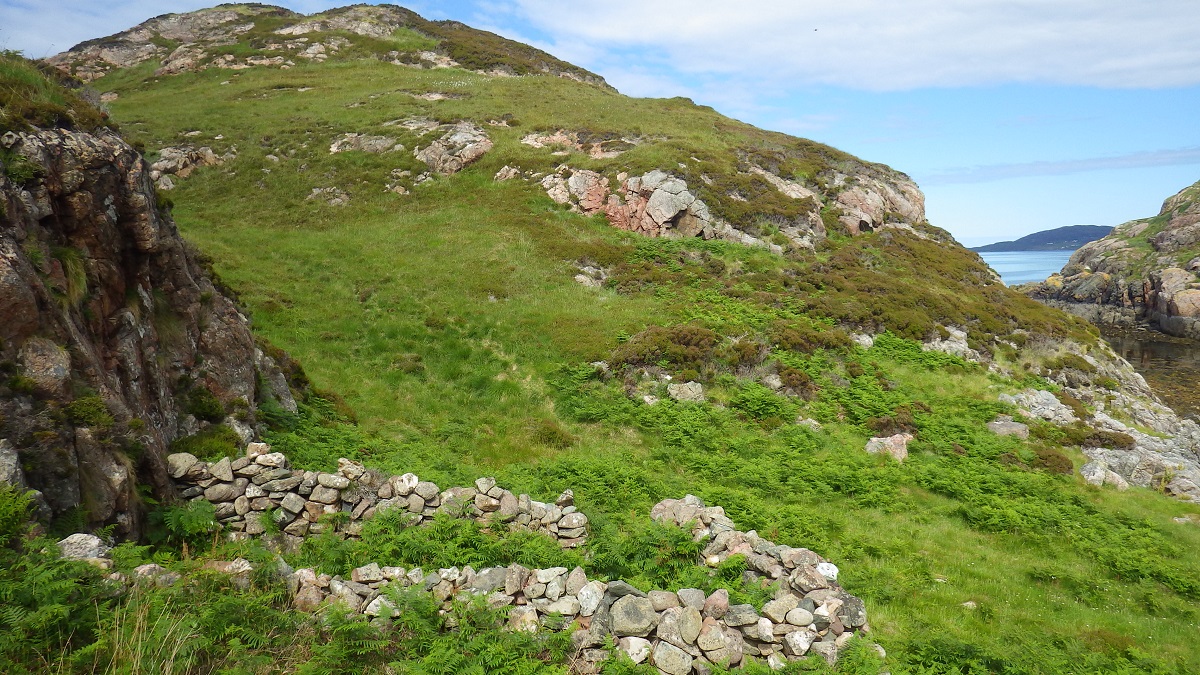 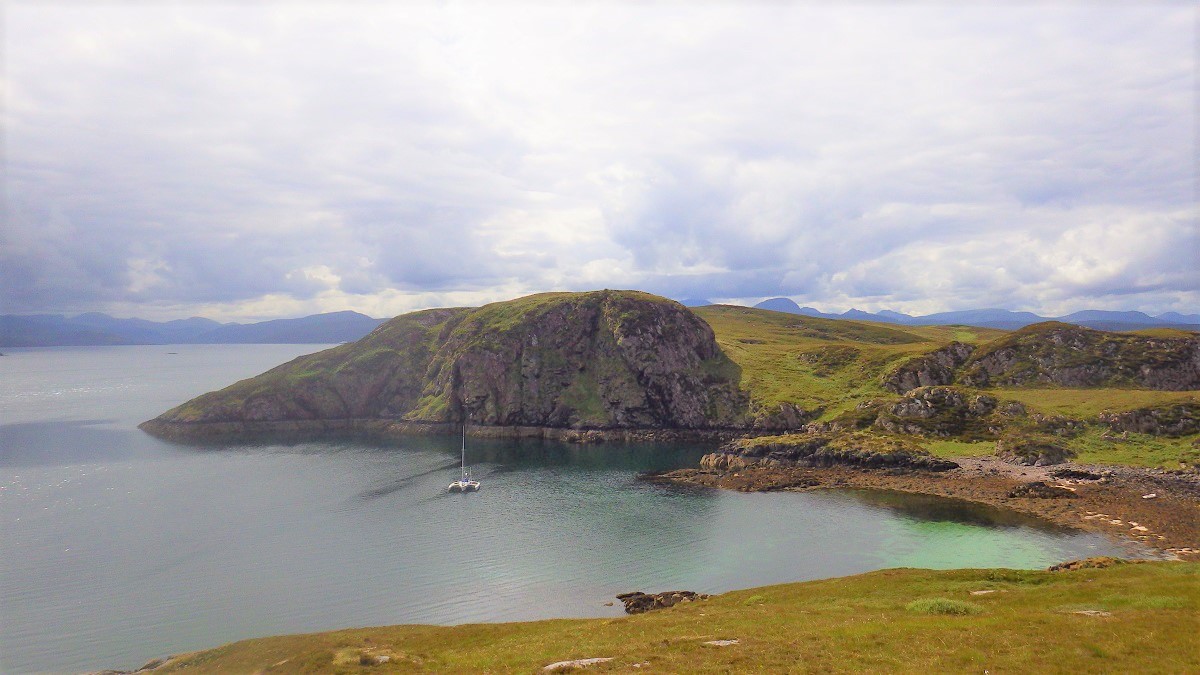 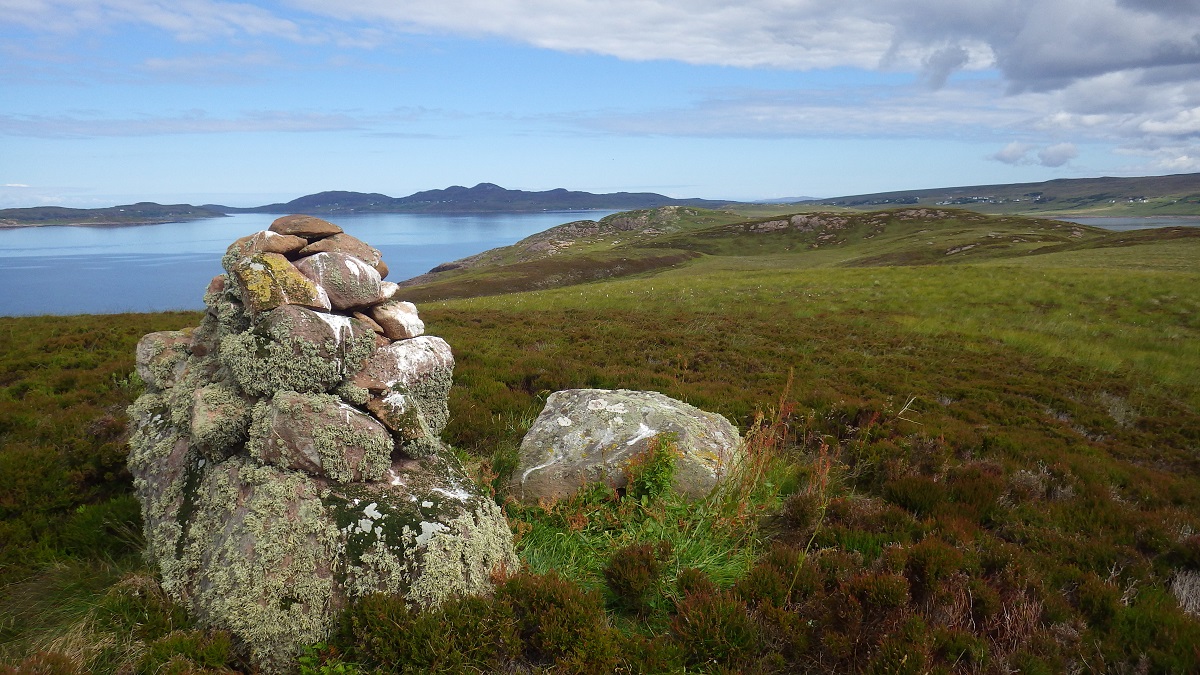