Rubha an Ridire – A little island of shipwrecks in the Sound of Mull opposite Duart Castle.

This little island sits to the north side of the eastern end to the start to the Sound of Mull. It’s a fairly innocuous little island that sailors like myself have past many times without giving it any thought. That is other than not to ‘hit it’. As it turns out the little island has five wrecks lying at its feet. These being the Dartmouth, River Tay, Ardfren, Thesis, and the Ballista. As a result making the island a favourite diving spot with wrecks stacked one on another.

The Dartmouth had served a long career which included service in the Mediterranean and the Caribbean. In 1689 Dartmouth participated in the Battle of Bantry Bay. She was also a major player in the relief of Londonderry. The following year she was engaged in anti-Jacobite operations off the west coast of Scotland. While preparing to attack the Macleans of Duart on Mull she was struck by a violent storm and wrecked on 9 October 1690. The Dartmouth was discovered by amateur divers in August 1973. This was made possible by anchors, cannon, timbers and a bell being initially recognised and recorded.

About midnight on Tuesday 16 October 1889. The steamer Thesis, en route from Middlesbrough to Belfast, struck a reef at Inninmore Point. The vessel was loaded with pig iron, and sank in deep water bows first, four hours after striking the rock. Eleven crew were all safe, and landed at Craignure on Mull. Dory Video YouTube underwater video of Thesis on the seabed under Rubha Ridire is fascinating. here

Tobermory Lifeboat to the rescue

Some 50 years later on 24 November 1943 in westerly storm force 12 blizzards the steam trawler River Tay foundered on Rubhe Ridire and sits in 10 meters of water. All crew were saved by the Tobermory lifeboat.

Only seven years later in 1950, the Ardfern a steel fishing drifter sank and sits in 8 meters of water.

On 6th February 1973 the Ballista set out to salvage jettisoned coal from the River Tay only to be driven ashore in a storm and lost. Parts of her superstructure still appear at low spring tides. Wreck lies upright in depths of 3-10 metres and above the River Tay and Ardfren.

Our approach and navigation of Rubhe Ridire was considerably more successful that that of these unfortunate vessels.

We approached Rubha Ridire under sail on Richard Marshall’s yacht Nordic Fulmar. Our plan was to anchor in the shelter between the island and the high cliffs of the Morvern. As we approached we saw a signpost declaring the site as that of a recorded wreck and therefore no collection of souvenirs possible.

Richard and I were looking forward to exploring this lump of rock we had navigated around and by so many times before. Some of these had been in daylight and many in pitch darkness. The island has no navigation light to mark its location. As a result it is a dark silent shape that emerges from the gloom and passes by when night sailing on the Sound of Mull.

With the anchor set Richard Willie and I jumped into the dinghy and paddled the short distance to the rocks. The north west edge is sheer and banded in different tidal coloured belts. Each applied to the rock as decreed by time both above and below the tidal rise and fall. We saw a slanting slope of smooth rock so we headed to this natural slipway. Now there is a reason why boats are launched on slipways – so the boats can be run up and down the surface.

I was the first one out and almost fell my length. The surface was the smoothest and most slippery surface I think I have ever experienced. Fresh water was smoothing over the surface so keeping the rock lubricated. Teetering like a geriatric I made for the sheer rock at either side of the slipway. Richard and Willie slithered up the slope to the safe rocky surface.

We pressed on along the rough and bouldered high water line and on into the heart of the island. We were soon back into familiar bracken and heather with brambles grabbing at our socks and grazing out shins. The island is split into two distinct parts and with a tidal channel separating the east and west ends. We could see the high point was on the eastward end. We were faced with a short transverse of the seaweed and rock littered sandy bottomed channel. We scrambled up through the undergrowth and topped out to see out to the views up and down the Sound of Mull.

There was a real sense of satisfaction standing here in Ruhbe Ridire looking at ten to fifteen yachts on the busy Sound of Mull – the M8 of west coast sailing. Time to go, so we scrambled back down the shoreline and chose to rock hop around the north shore rather than fight the brambles.

We paddled back to Nordic Fulmar for a brew and content with another island bagged. We slipped out from behind Rubhe Ridire and headed off to Lismore to nick another island before night fall. 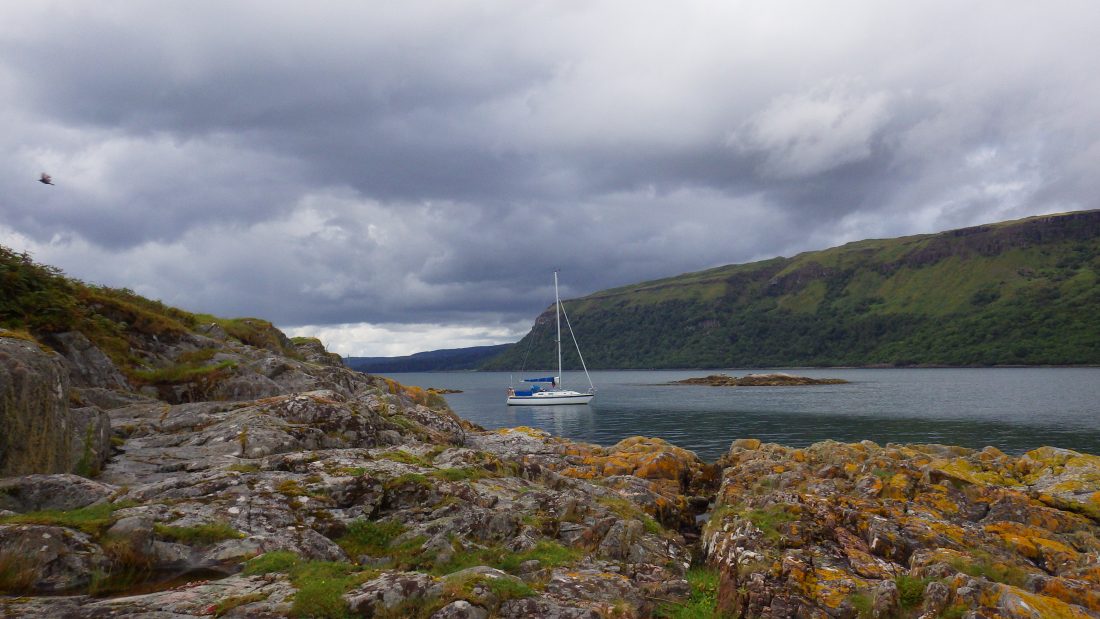 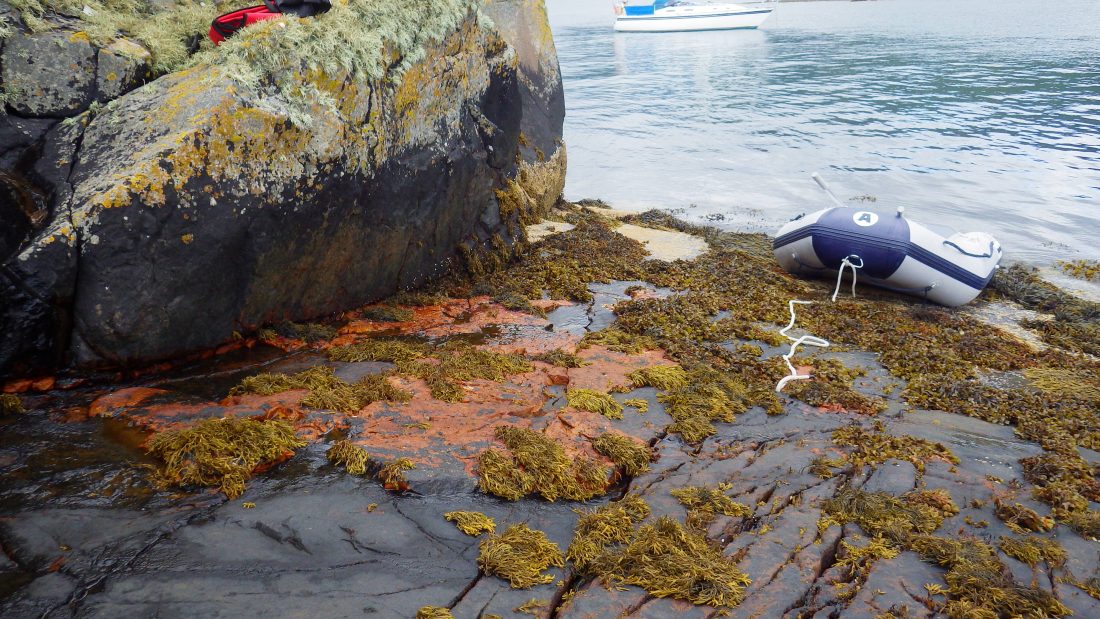 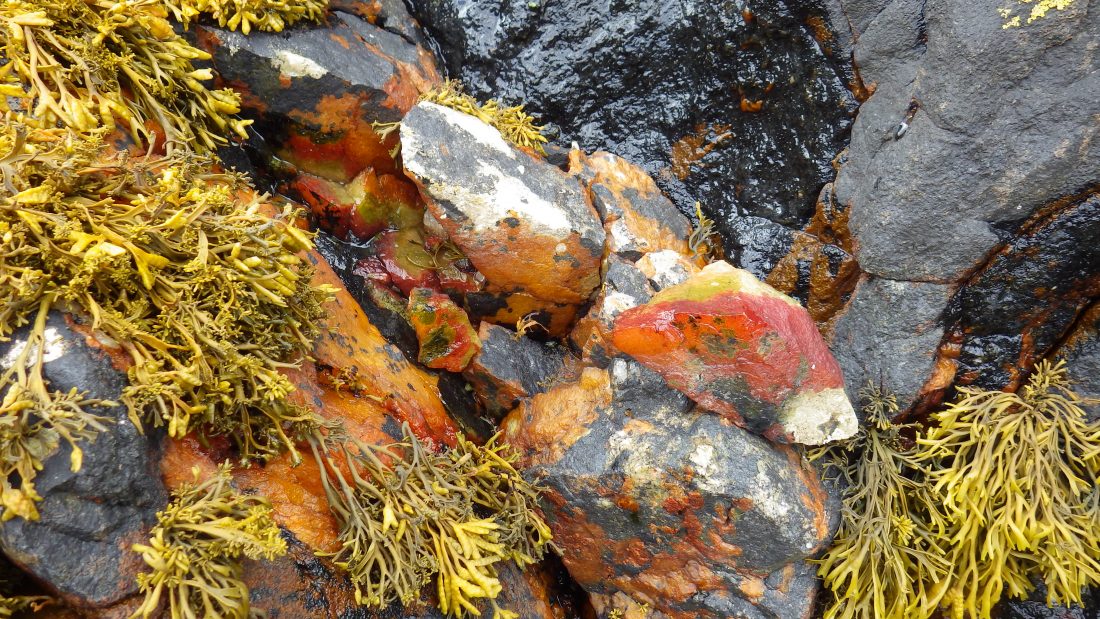 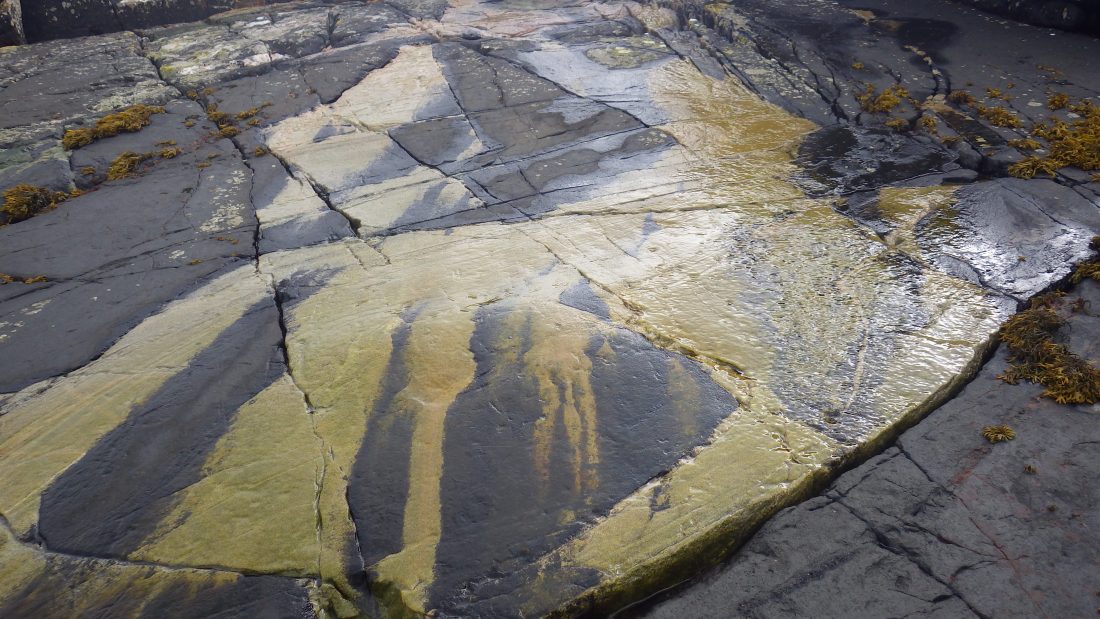 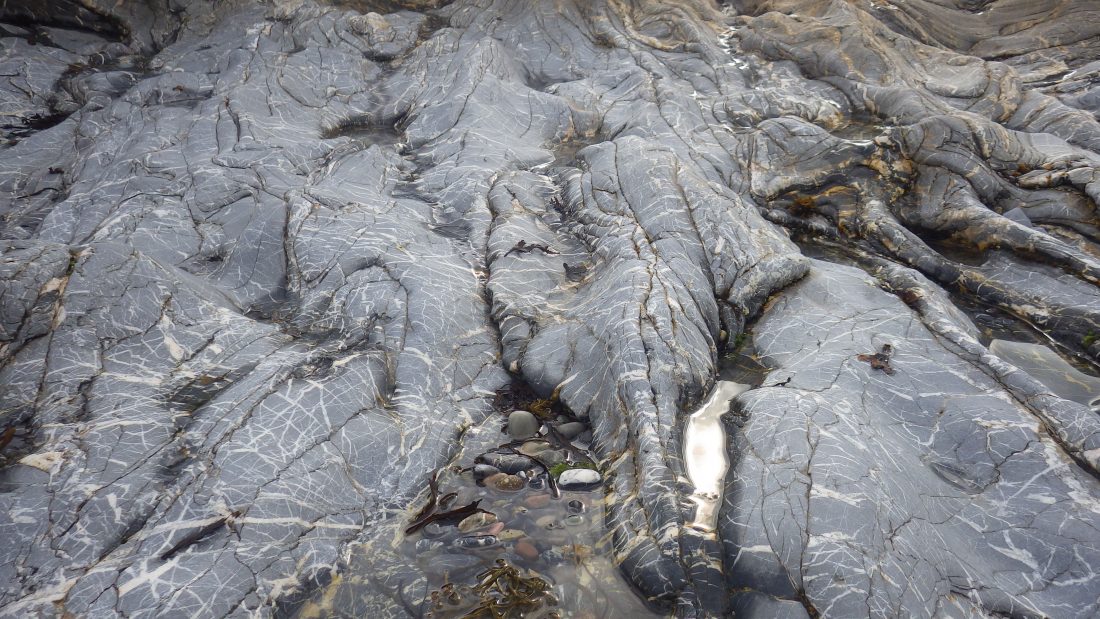 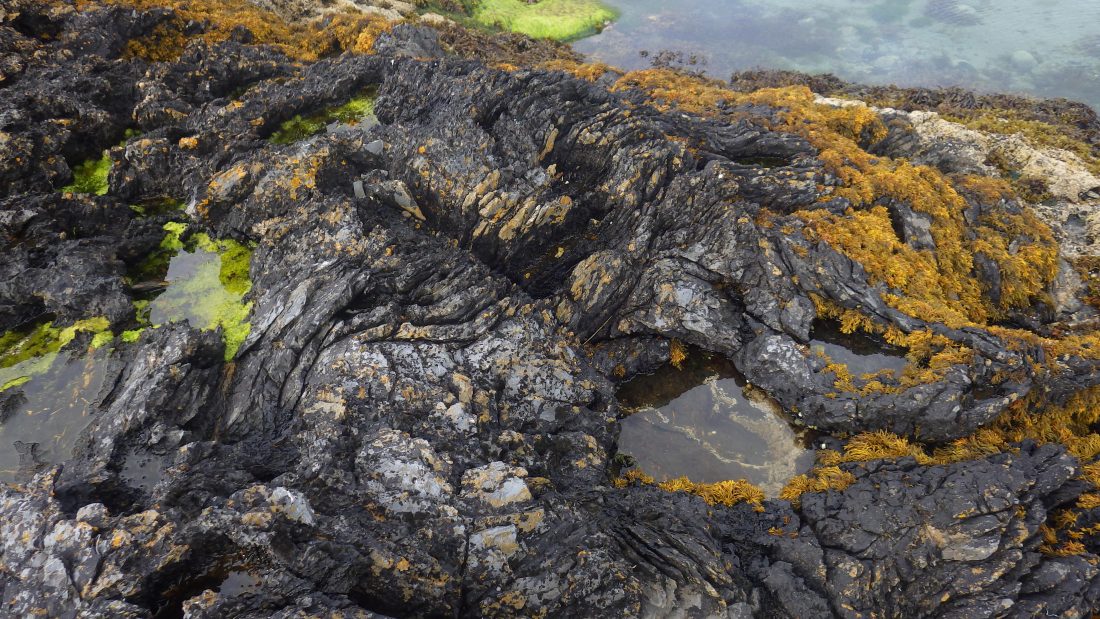 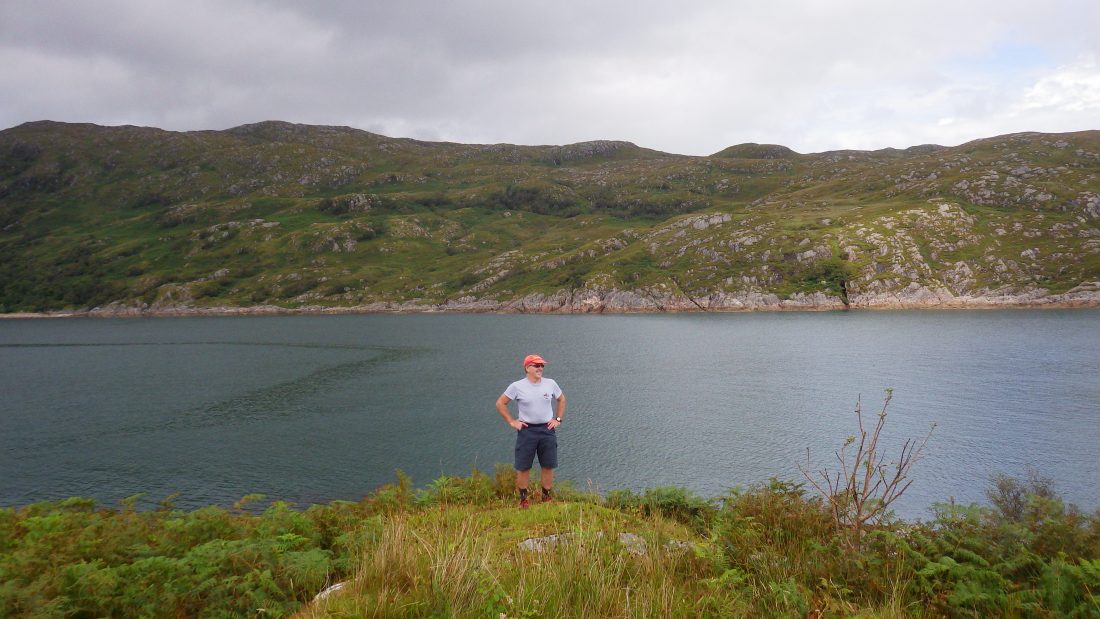 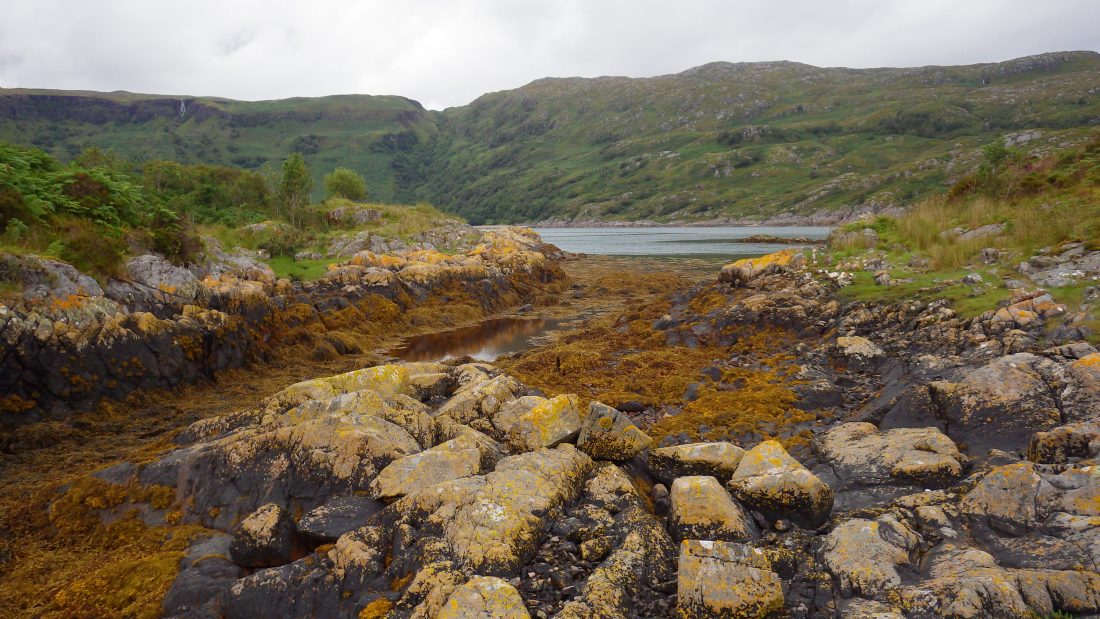 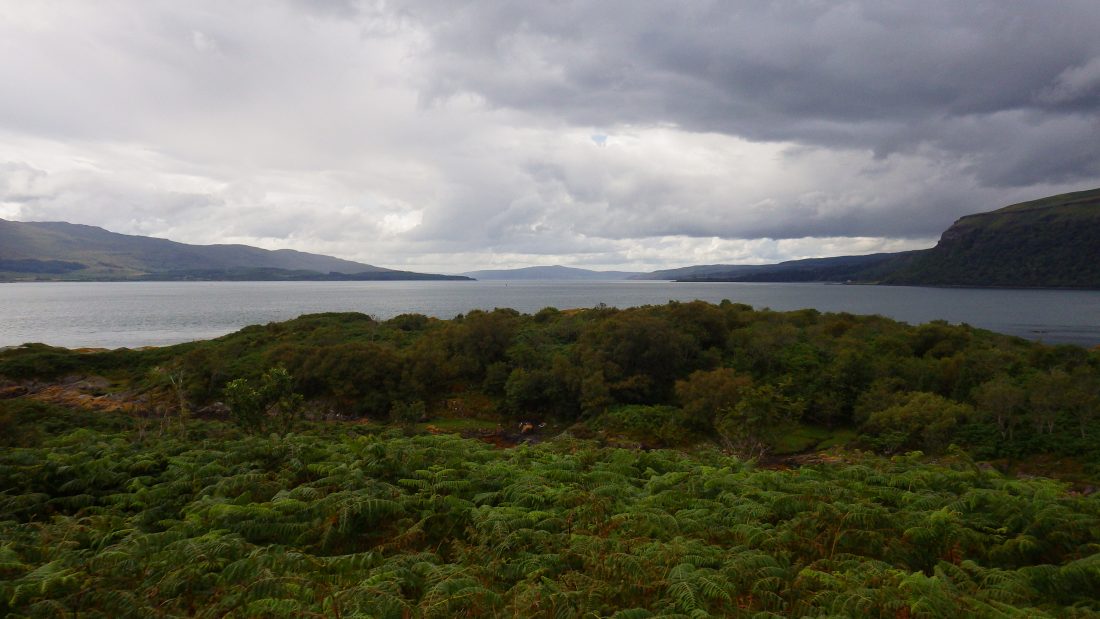 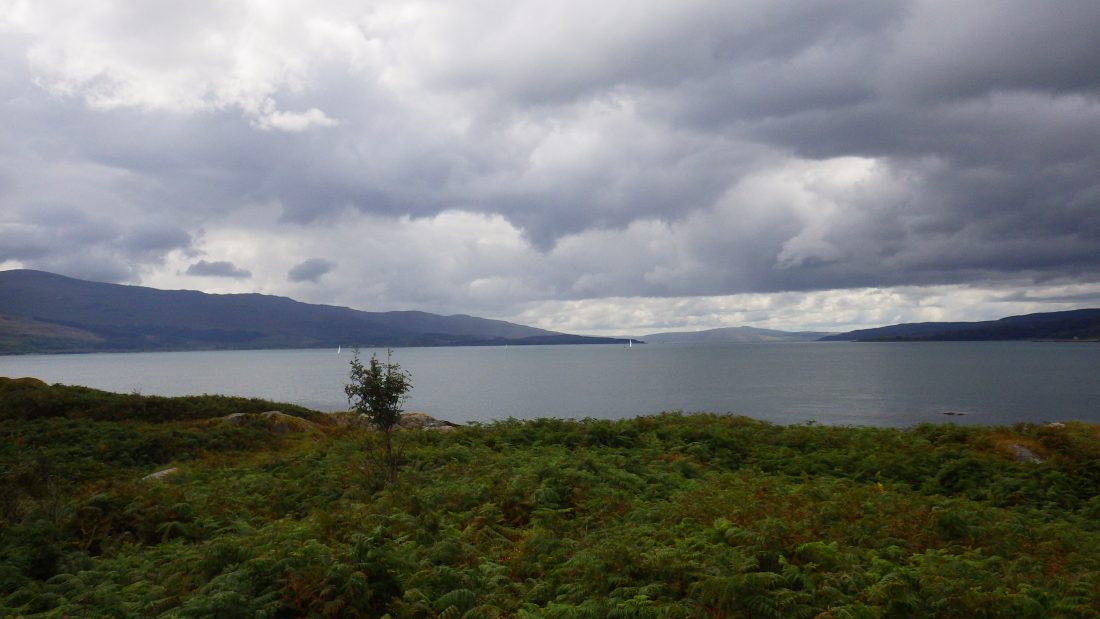 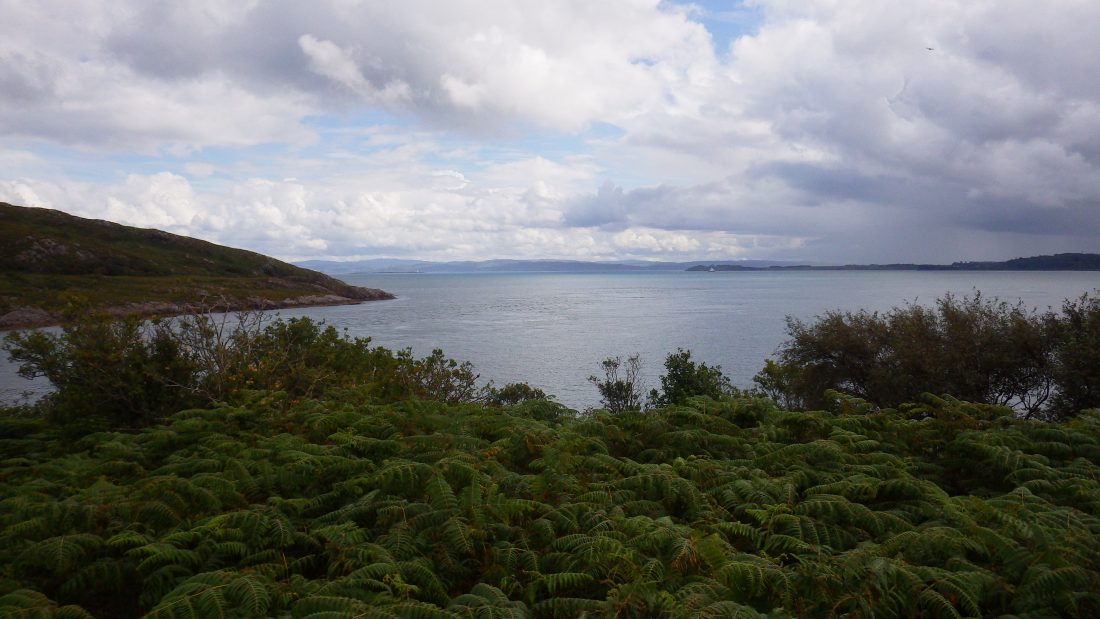