Tanera Beg is a perfect example of a north west Scottish island. Made from 1bn year old Torridonian sandstone, uninhabited and with unspoilt lochans, wetland, flowing grasslands and views to the Hebrides and beyond….

I approached Tanera Beg from Isle Ristol so came south through the narrow channel between Tanera Mor and Tanera Beg. The channel is called Caolas a Mhill Ghairbh. (G. – channel of the broken pieces) well it certainly lives up to its name as it is littered with rocks and shoal banks.

I chose to anchor right under Eileen Fada Mor, another of the uninhabited Summer Isles. The wind was blowing from the north so it was the best place to drop the anchor and then ride back and lie pulling towards the centre of the pool and not towards the shore. The location would also allow me to knock off Eileann Fada Mor from the same stopover point.

Tanera Beg like its big neighbour Tanera Mor is constructed from Torridonian sandstone. However, the unique characteristic that is Tanera Beg is its bank of coral sand. At low water pink corals are visible. The main bulk of the island is covered mostly with peat, grassland and heather. The island has aspen poplars and wonderful seas of bog cotton that float in the breeze.

I rowed the 150 meters over to Tanera Beg and found an accommodating slab of rock to land at, the rest of the shore line being sheer and twisted gnarled ancient rock.

Once beached and having secured the dinghy I scrambled up the rock face and up onto a tangle of heather and bracken. It was a rough start and one that would leave my shins bloodied and sore. In the tangle, I found a trod through the undergrowth, clearly, I had picked the landing spot chosen by other yachties. Onwards and upwards I scrambled my through the undergrowth and between boulders until I came to a plateau of bare rocks and patchy heather cover. From here the main top was quite clear and to reach would involve me dropping down about 25 m and so lose all the height gain or traverse left and around the steep drop before me. I chose the latter and worked my way along the ridge and down onto a wonderful valley with a rising slope leading all the way to the summit.

The island is straddled by a low lining lush valley or saddle. The flat ground that separates the slopes is of deep grass, peatbog and wildflowers. Rising from the saddle the slopes have patches of bare red sandstone rock breaking out from the thin layer of vegetation.

The climb was one of these wonderful hard-yard experiences. Hands on thighs, head down and just grind it out. The route was straight forward with only slight deviations to pick out the reassuring firm surfaces of bare and lovely grippy sandstone.

At the summit and standing atop the cairn I did a Titanic movie moment and stood face to the northerly breeze, arms out and simply absorbed through every pore and sense the circumstance and the place I was at and just how wonderful it all felt. The open views out to the Minch and Hebrides beyond, south to Rubah Reidhe and away south to Skye was bettered by the view to the north and the prehistoric Westreross hills and giants of past eons in the shape of Suliven, Stac Pollaidh and Coigach.

Below the summit and to the north is a small lochan of brown peaty water. Looking at that small patch of water on this an untrod and untroubled island there must be a microcosm of life not impacted by man and our actions. Unlike a beach, so not reachable for the floating plastics at sea, but just heather and vegetation living in harmony.

Film and photos done of another Scottish island and moment absorbed I made a quick descent back down to the grasslands and back up to the ridge and on down to the dinghy. A happy man I rowed off in search of coral and not far settled above the whitest of sands in about 2 meters of water. I’m tried to capture the scene on camera but it did it no justice at all.

I rowed back to Trade Winds, content in the fact that I had topped an island I had never before set foot upon. I had been lucky to do it on a fine day and all was good. One more island to this day and that was neighbour and big brother Tanera Mor. 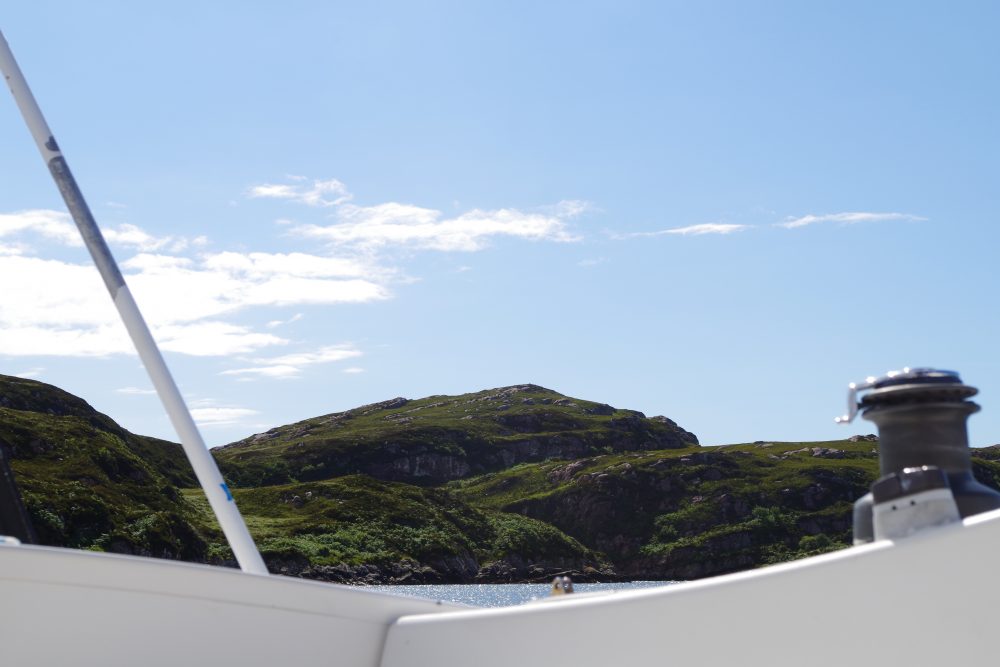 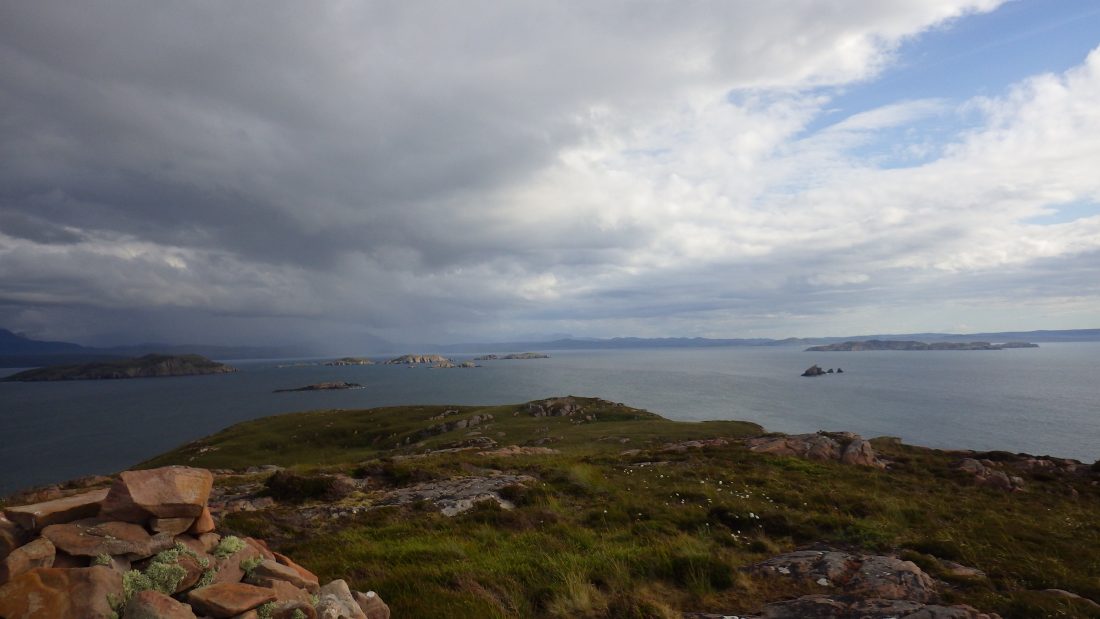 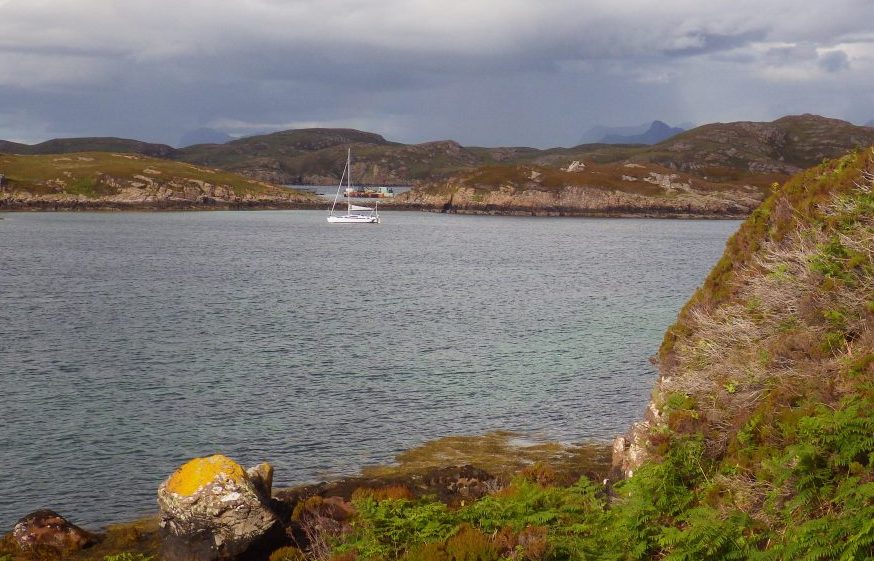 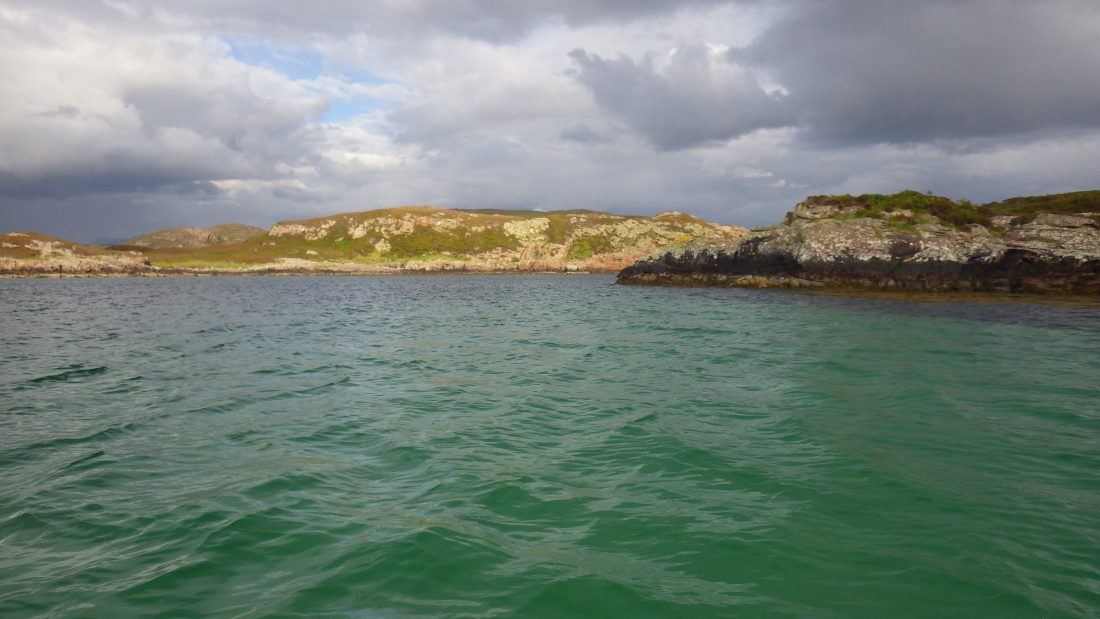 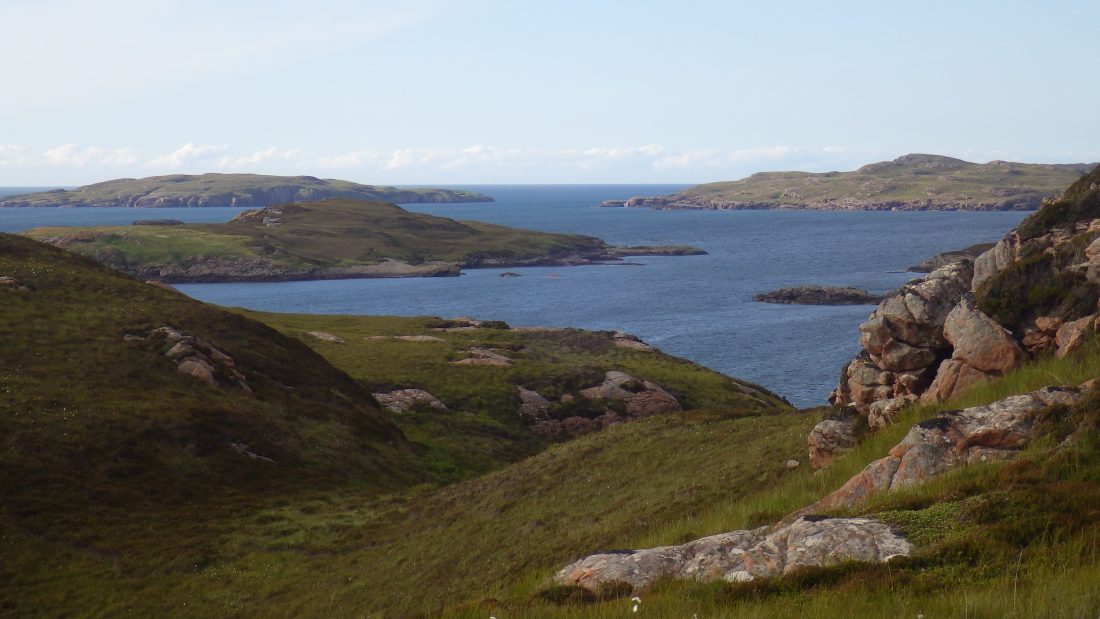 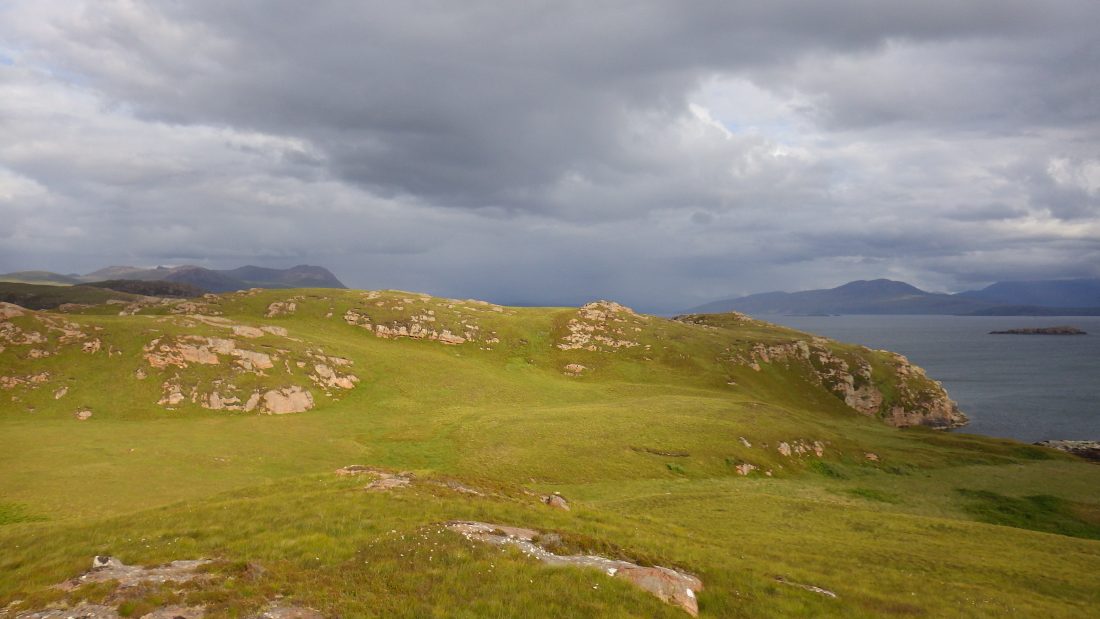 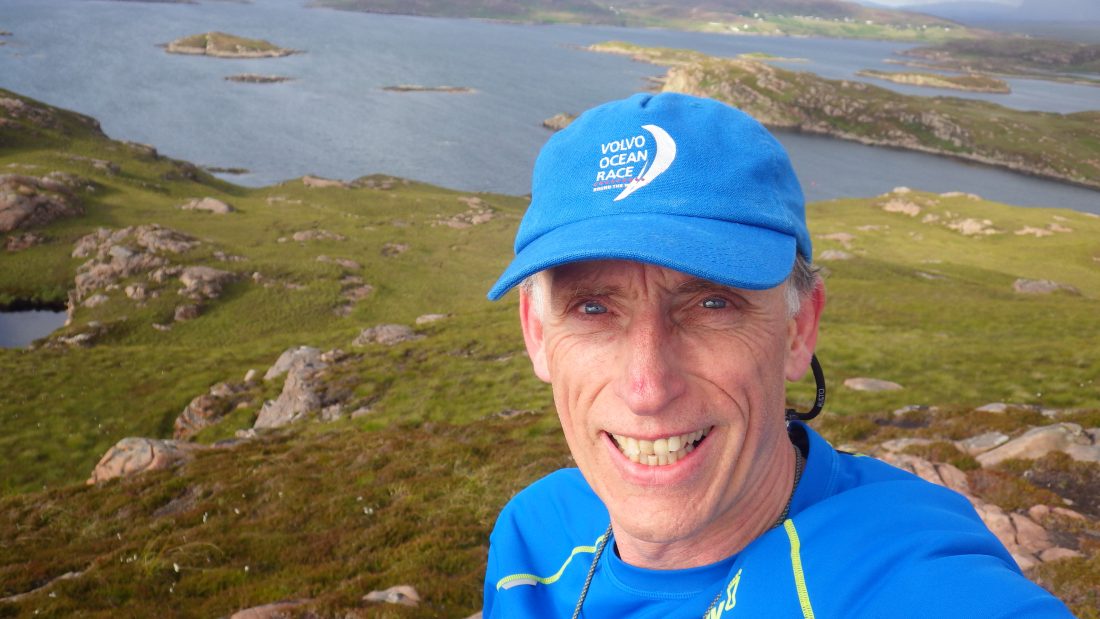 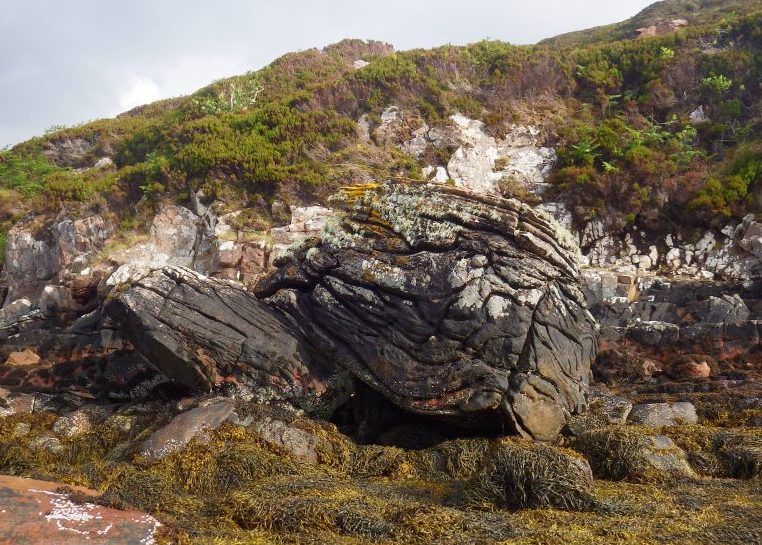 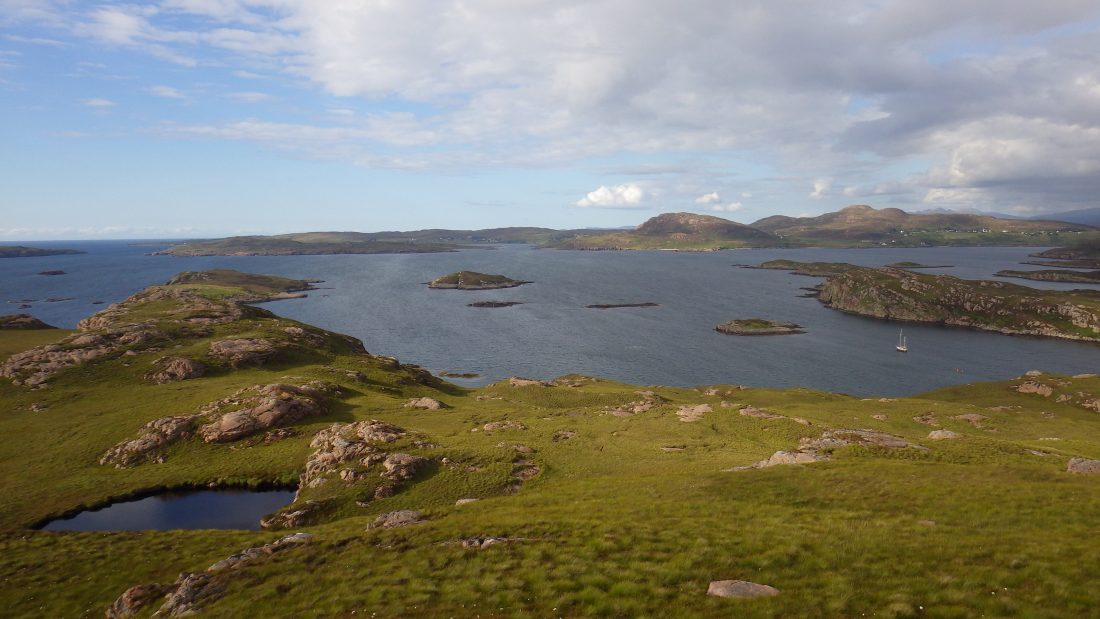 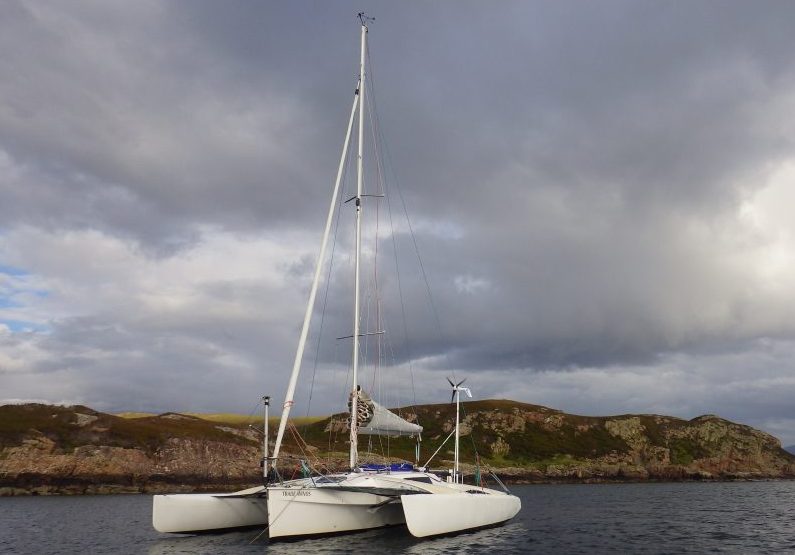 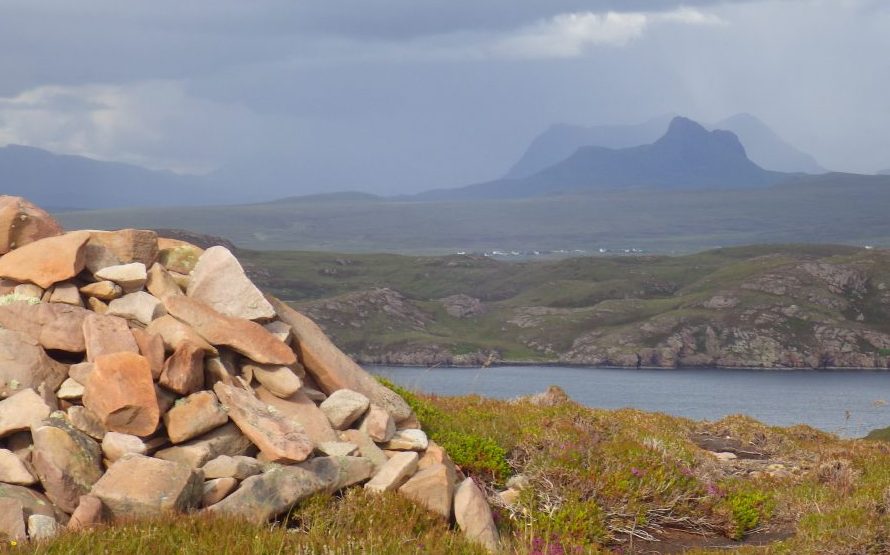 Wonderful 360 degree views from the summit on Tanera Beg Summer isles. Looking out over the Minch, Hebrides, WesterRoss, Ullapool. Loch Broom and Suliven