Tanera Mor is the largest of the Summer Isles. It has been home to the Vikings, Fish Factories, herring boats, sailing school and fish farms. Tanera Mor is now under new owners with a new lease of life as a place to visit and enjoy.

Tanera Mor is the largest and tallest of the Summer Isles at 310 hectares and Meall Mor standing at 122m. The island is privately owned and has like many Scottish islands had a population decline. Peaking at 119 in the 1880s to last census in 2001 of 5. Like other islands in the area its made of 2.5 billion year old Torridon sandstone. The island is mostly covered by grassland pastures, heather and peatlands.

Tanera Mor was a favourite anchorage for the Vikings who used in the main north shore bay; The Anchorage. In its heydays in the late 1800s the bay accommodated over 200 herring drifters and a fish factory built by the London based British Fishing Society. The salted herrings were exported around the world. What different times!

Intriguingly the area Cnoc Glas (G. – green knoll) in the middle of The Anchorage bay is referred to as the Irish Park. This, because much of the soil for the area came from Ireland as ships ballast.

Tanera Mor was to be my last island of a six-island day.  I motored Trade Winds into the southwest facing bay Mol Mor. Sheer cliffs rose up on either side and ahead lay a slopping beach. From there a grass bank rose into the heart of the island. The Mol Mor beach is made up of boulders, rounded and smoothed by wave and tide. The bay is open to the south so is only advisable when seas and winds are calm or from the north.

I paddled ashore and pulled the dinghy up a few feet as it was a falling tide. It was now 8pm and my visit to the island would be an ‘up and down’ trip to the top. The scramble up was ‘route one.’ That took me up a slope over a fence then straight up steep craggy slopes and rock. The last few meters of height to the flat top were scrambling on all fours and climbing boulders and nipping up heather gullies.  The top opened up with uninterrupted views out the the Hebrides that seemed to go on for ever.

Below and to the north west lay The Anchorage with its circular fish cages. Achiltibuie lay to the north and beyond Sulivan and the layers of slate grey mountains. Loch Broom lay to the east with Rhue lighthouse just visible in the soft evening light. An incredible vista lay out to the west and the wide open Minch. The sun was now lowering in the west so it was not possible to see the Hebrides against the evening glare.

Video, pictures and a big inhalation of the view done, I turned and picked my way back down the steep slopes back to Mol Mor bay. For the sixth time that day I was picking my way through deep grass and heather and stroking the soft bog cotton with the palm of my hand .

The trip back down the steep slope was a stumble-jog-walk affair until I emerged back at the boulder bay. I was also conscious that the midges were out and intent on making a meal of me. With no wind or breeze it was not the conditions to hang around the shore line. The dinghy was rapidly deployed and I rowed to the boat at a pace to escape the little pests.

Back aboard, a big pasta, smoked sausage and  sauce mix was devoured. All the shore gear was stored away and with the anchor retrieved and I set sail for Ullapool. From there it was a couple of hours back to the mooring in what was a shifty breeze. At 00.30 hours I picked up my mooring in Ullapool bay. That being 18 hours after having cast off with 35 miles sailed, 12 miles yomped and six islands topped. All in all, not a bad day out. 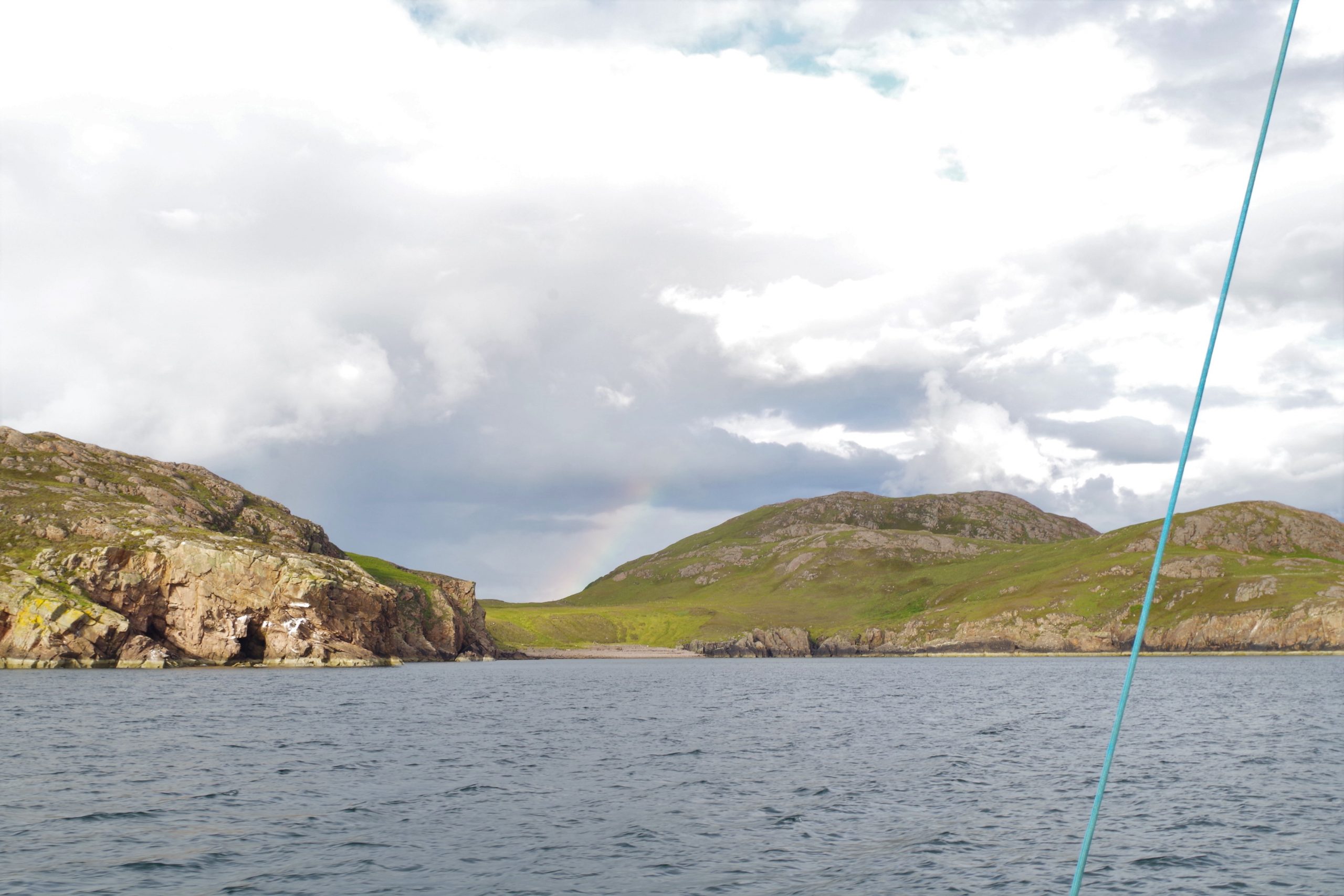 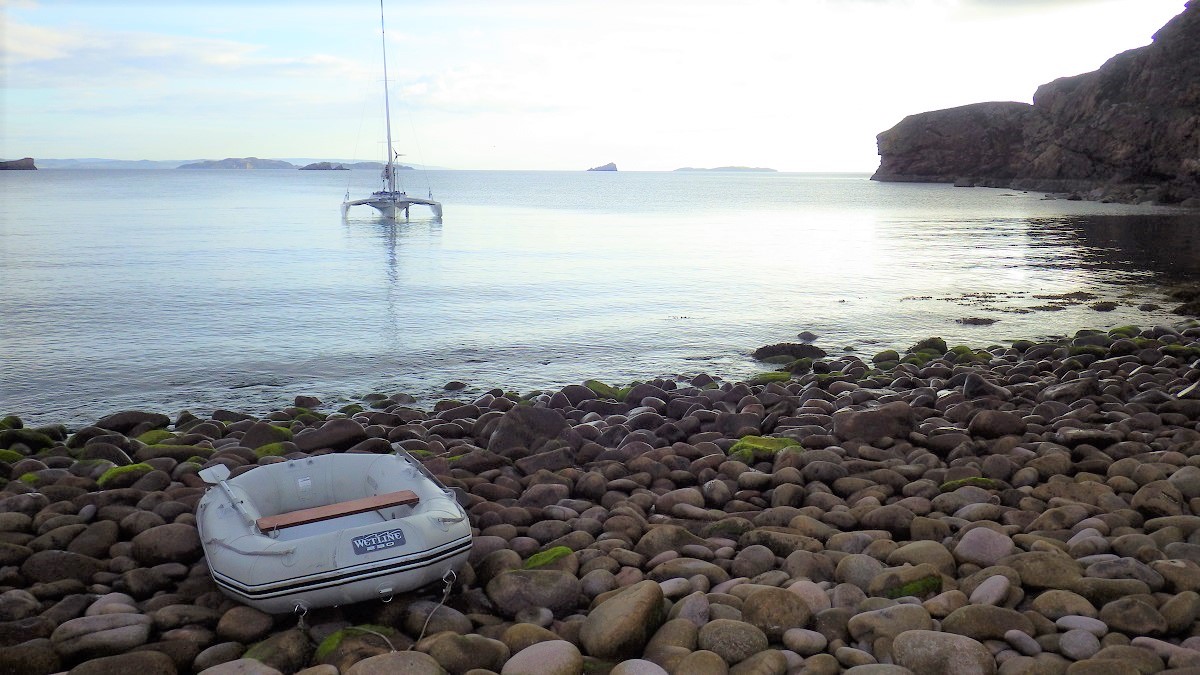 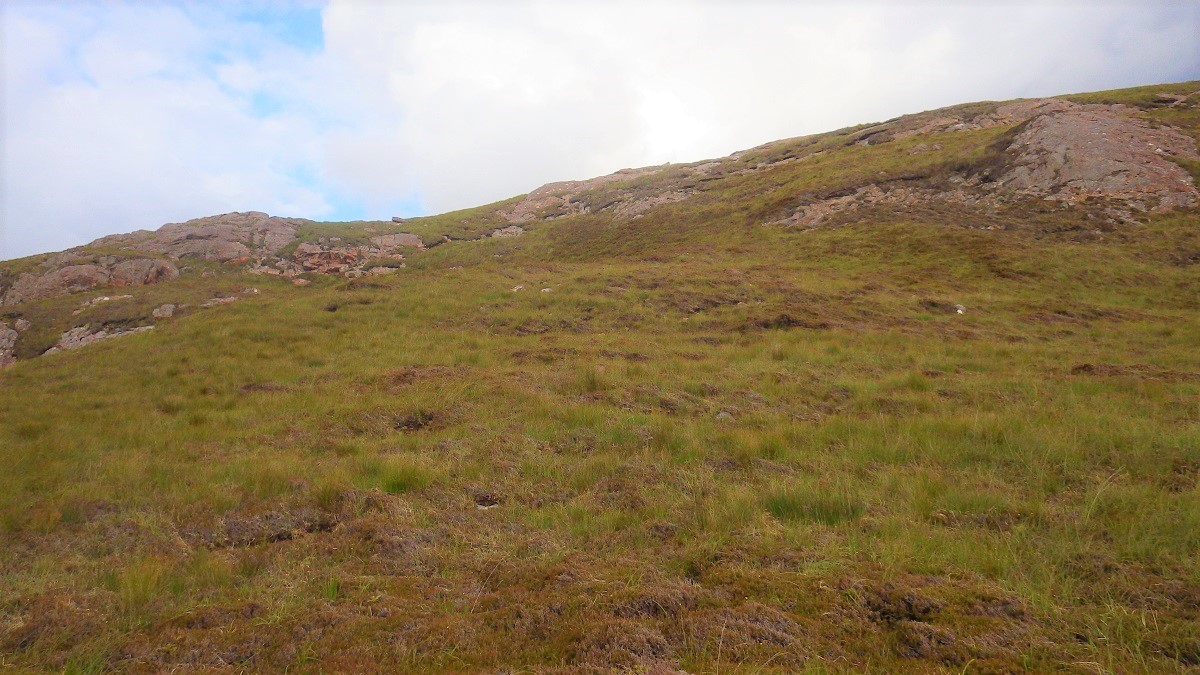 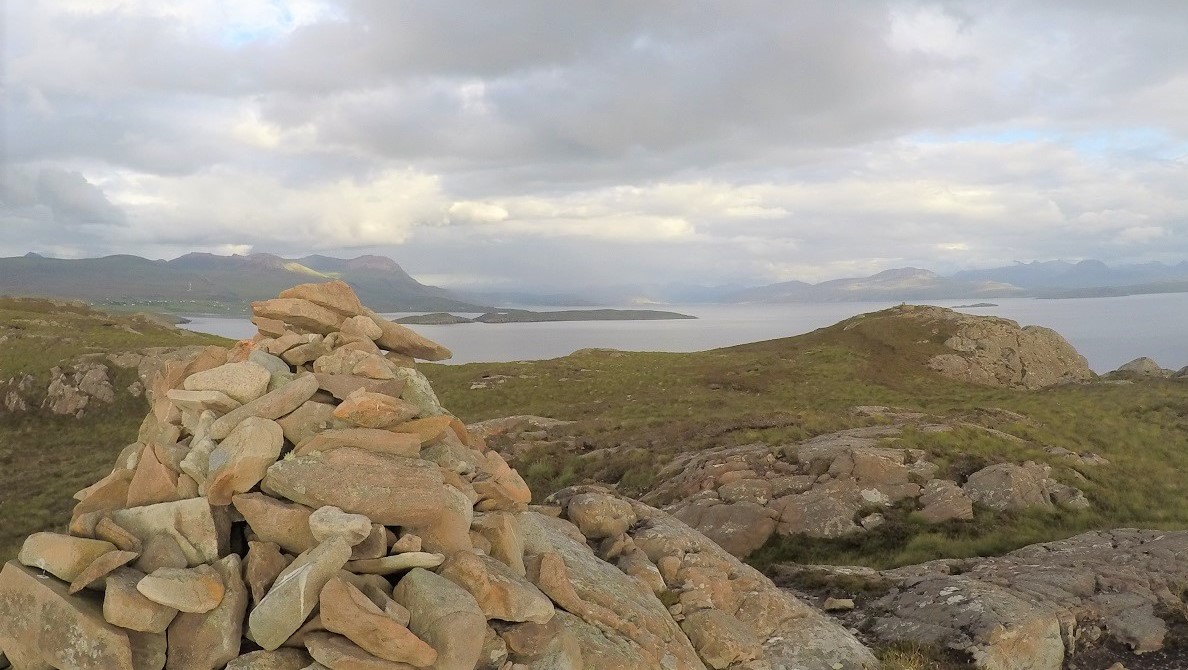 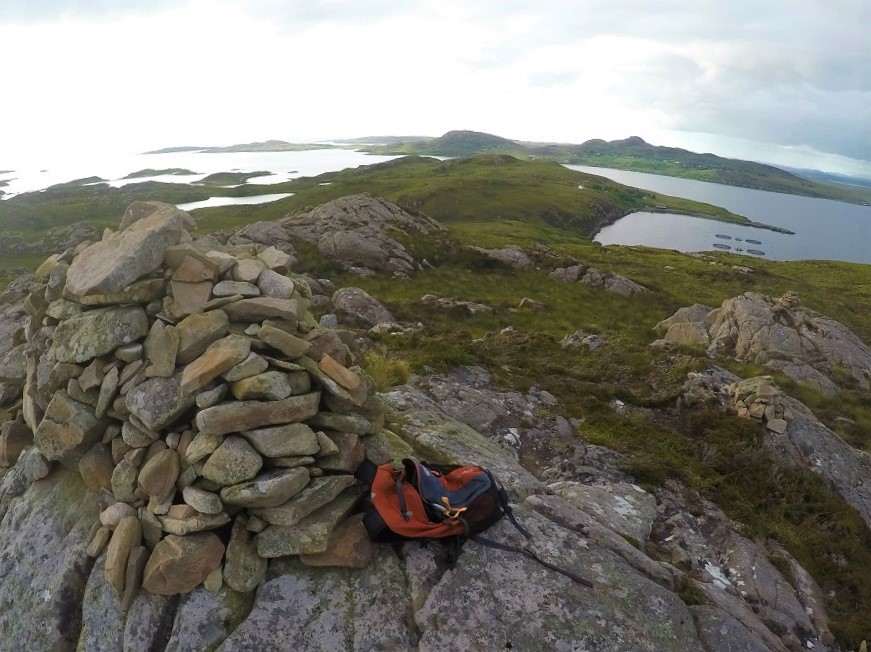 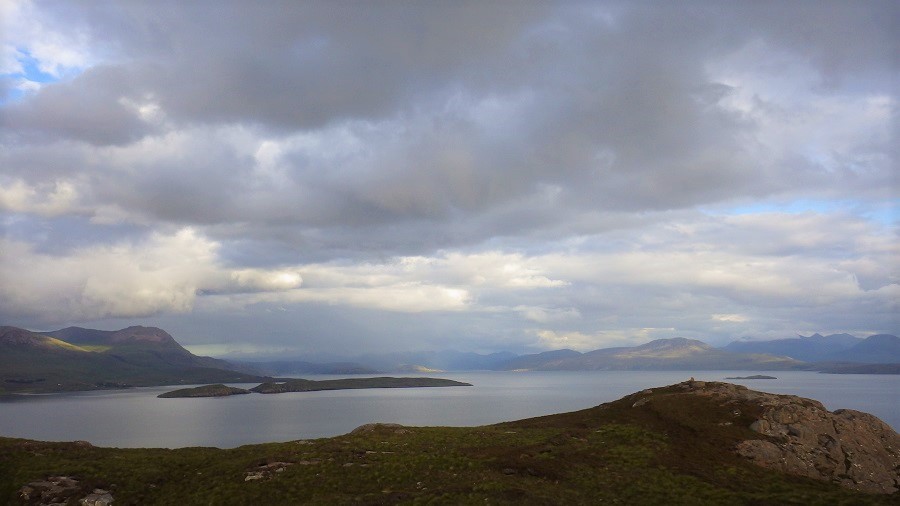 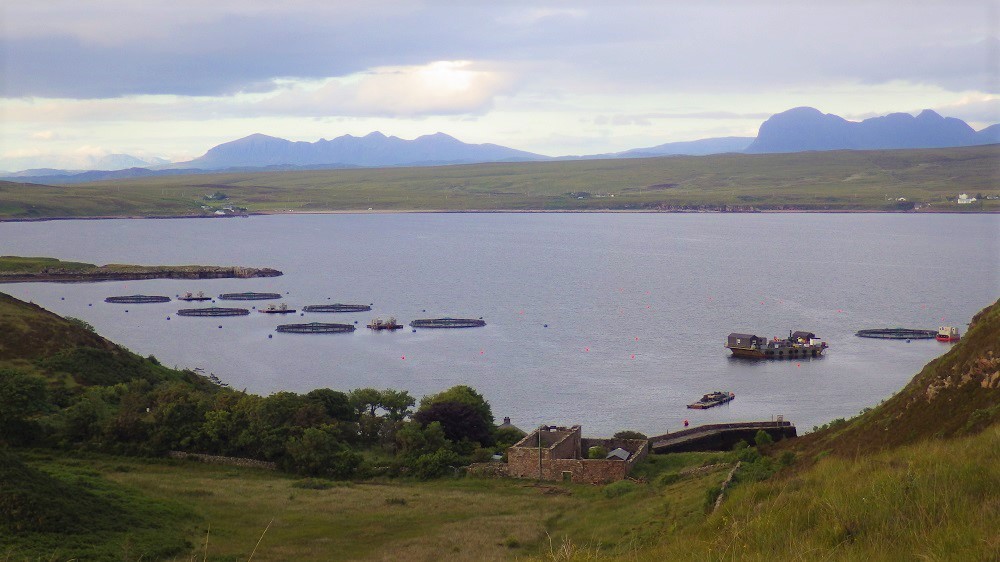 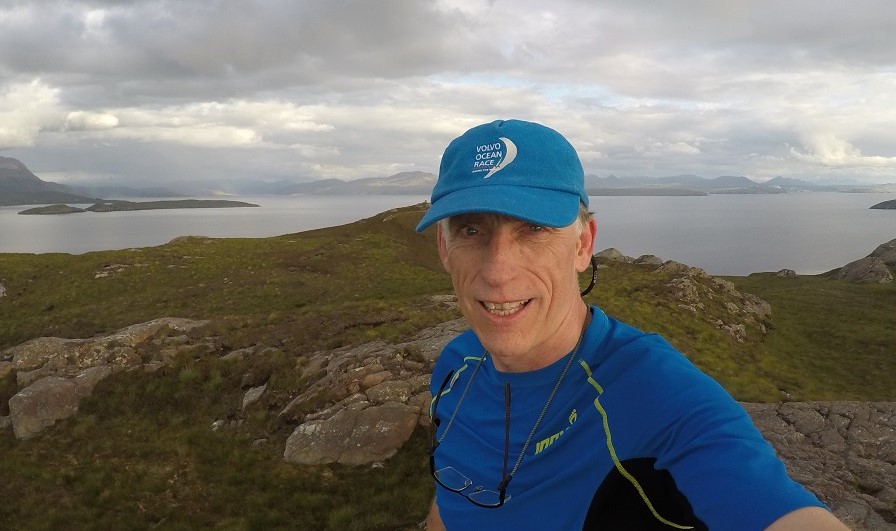 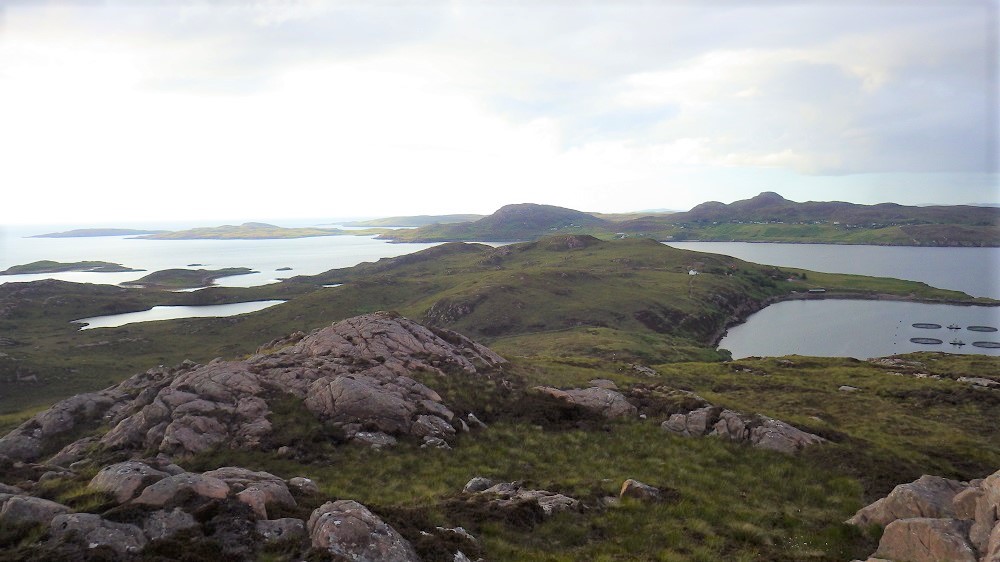 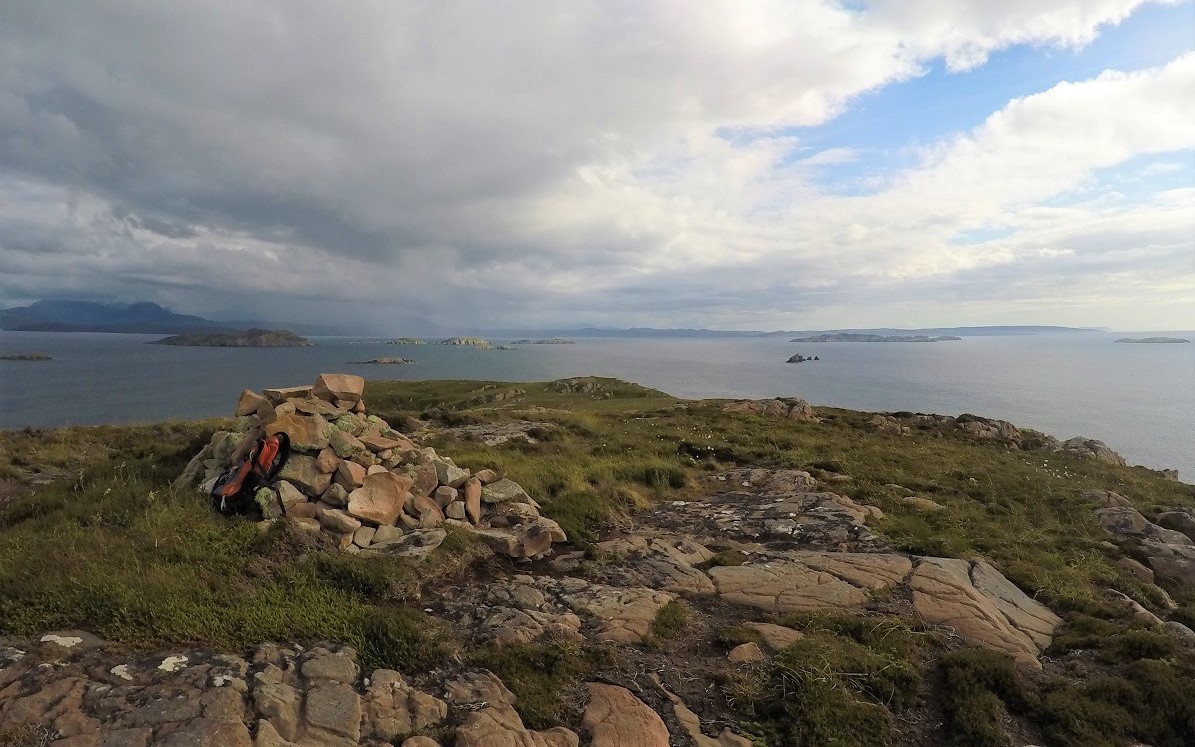 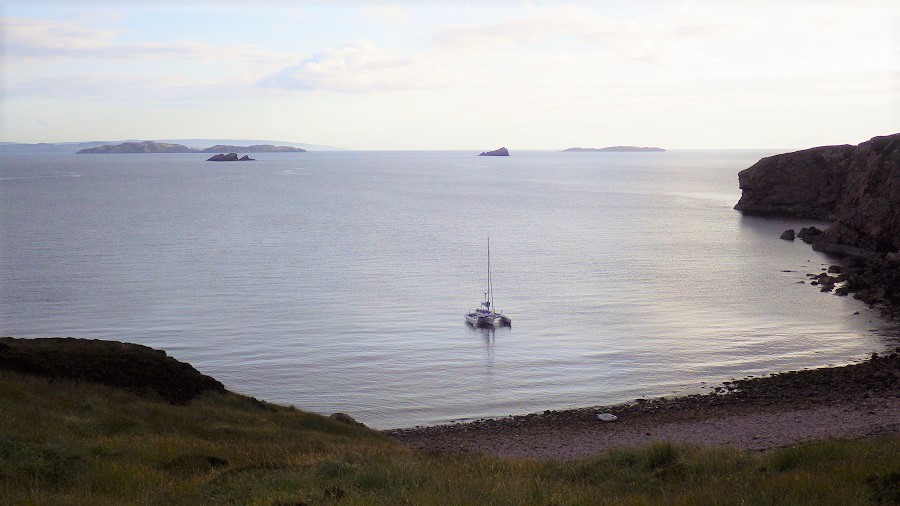 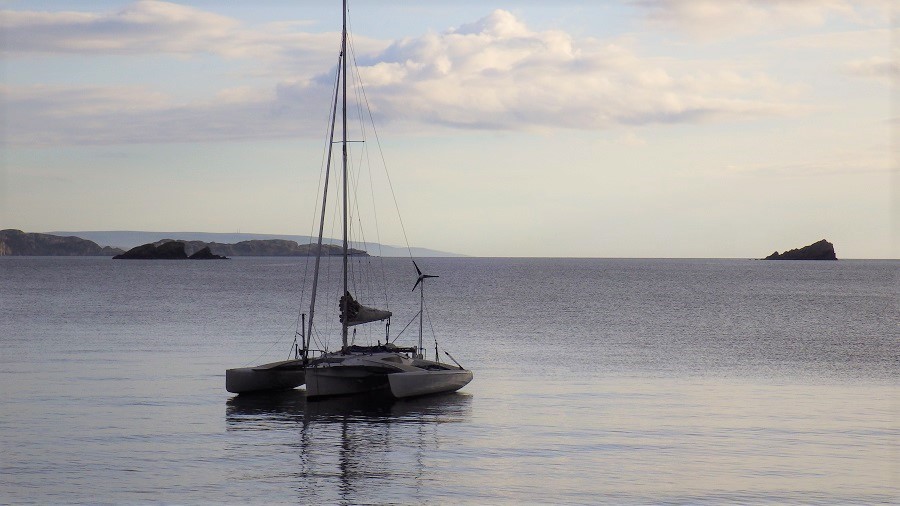 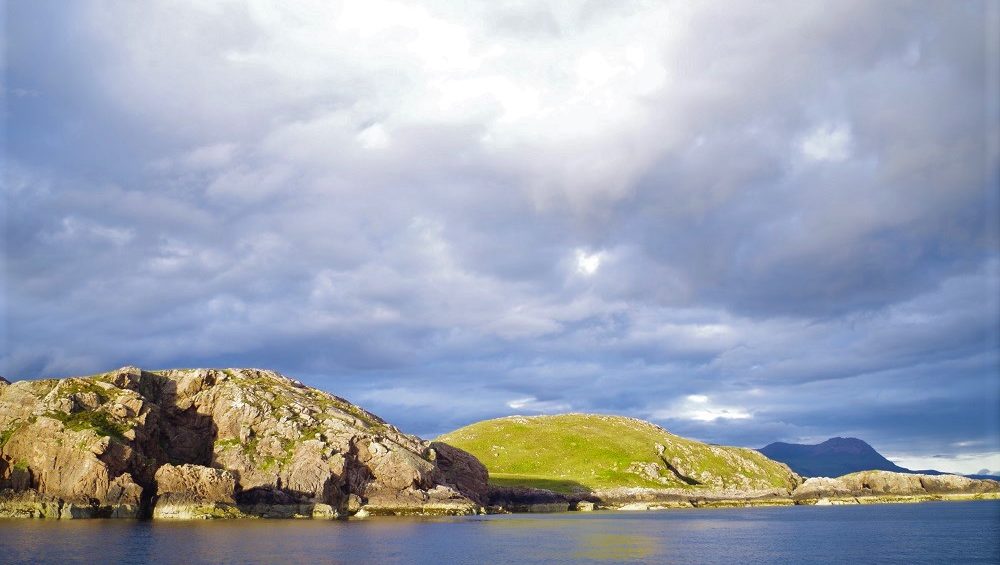 360 degree panorama video from the top of Tanera Mor looking out across Loch Broom, the Summer Isles, The Minch and north to the mountains of Wester Ross. Scotislands at their very best!

Relive the short but very steep route from the beach to the very top of Tanera Mor!