The Dutchman’s Cap or Bac Mor is one of the Treshnish Isles near Mull and is one of the most striking and iconic Scottish islands. Located a few miles west of Staffa and Iona.

The Treshnish Isles is an uninhabited archipelago of several small islands found off the south west coast of Mull. The islands have been landmarks for travellers through the Hebrides for at least 1,000 years. The names of some of the islands still reflect their importance to the Vikings who once ruled in the Hebrides.

The Treshnish Isles are owned by The Hebridean Trust charity. They are designated a Site of Special Scientific Interest SSI and a Special Protection Area SPA due to their importance for breeding seabirds.

Bac Mor is sometimes referred to as The Dutchman’s Cap due to its shape. The Gaelic name has a couple of possible interpretations. Mor simply means large, but Bac can mean a bank, or also an obstacle or hindrance. The islands profile is possibly the most distinctive of the Scottish Islands as it is like a Mexican sombrero or a Dutchman’s hat.

Bac Mor, like many Scottish islands is of volcanic origin. The peak in the middle of the island is a former volcanic cone. The flat surrounding ground is formed from ancient lava flows. Despite having no safe landing places there are the remains of summer sheilings on the island.

Having sailed past Bac Mor on many occasions the opportunity presented itself to land on the island on what was a totally flat calm sunny weather. The ‘Cap’ stood proud on a blue sea under a blue sky and looked very inviting. We positioned Springtide on the east shore opposite a flat spit of lava that projected out from the sheer cliff edge. On close approach the island is quite clearly weathered lava, black and pitted by hundreds of thousands of years of west coast weather.

We landed below a gully or split in the cliff face. It was a scramble on all fours to climb up the to grassy plateau. On broaching the plateau, a wonderful open grassland stretched to the north. Beyond that the remainder of the Treshnish isles lay quietly in light blue sea . The pleasure of landing on an un-grazed Scottish island is a delight with thigh deep grass, wild meadow flowers and birds darting from bloom to bloom.

The island is almost devoid of heather with a deep carpet of grasses and some bracken. The breeze was just strong enough to bend the grass over showing its silvery underside. Waves of shiny grass fluttered north pushed on by the puffs of wind coming from the south.

Time was of the essence, so I made a straight line up the steep bank aiming to summit along the north ridge. With the route topping out at the ‘lump’ of rock protruding from the plateau. It was a complete pleasure to make my way up and up towards the top. One last scramble brought me out to the rounded summit that is topped with a concrete indicator and trig point. The views were breath-taking. Coll, Tiree to the west. Iona, Staffa to the south east with the backdrop of Mull to the east. To the north the rest of the Treshnish Islands, west corner of Mull and Ardnamurchan point beyond. Further north  Eigg, Rum and the faint shape of the Cullins on Skye. stood above the blue sea.

My taxi was waiting so after a quick 360 video and a minute to soak up the view I set off back down the steep slope to the gully. The depth of the grass allowed me to throw myself down the slope bouncing on the soft verdant cushion. The trip down took a fraction of the time of the grind up the hill. Once back in the dinghy we paddled very slowly back to the yacht. The visit to the island had been wonderful in the glorious Scottish summer weather. 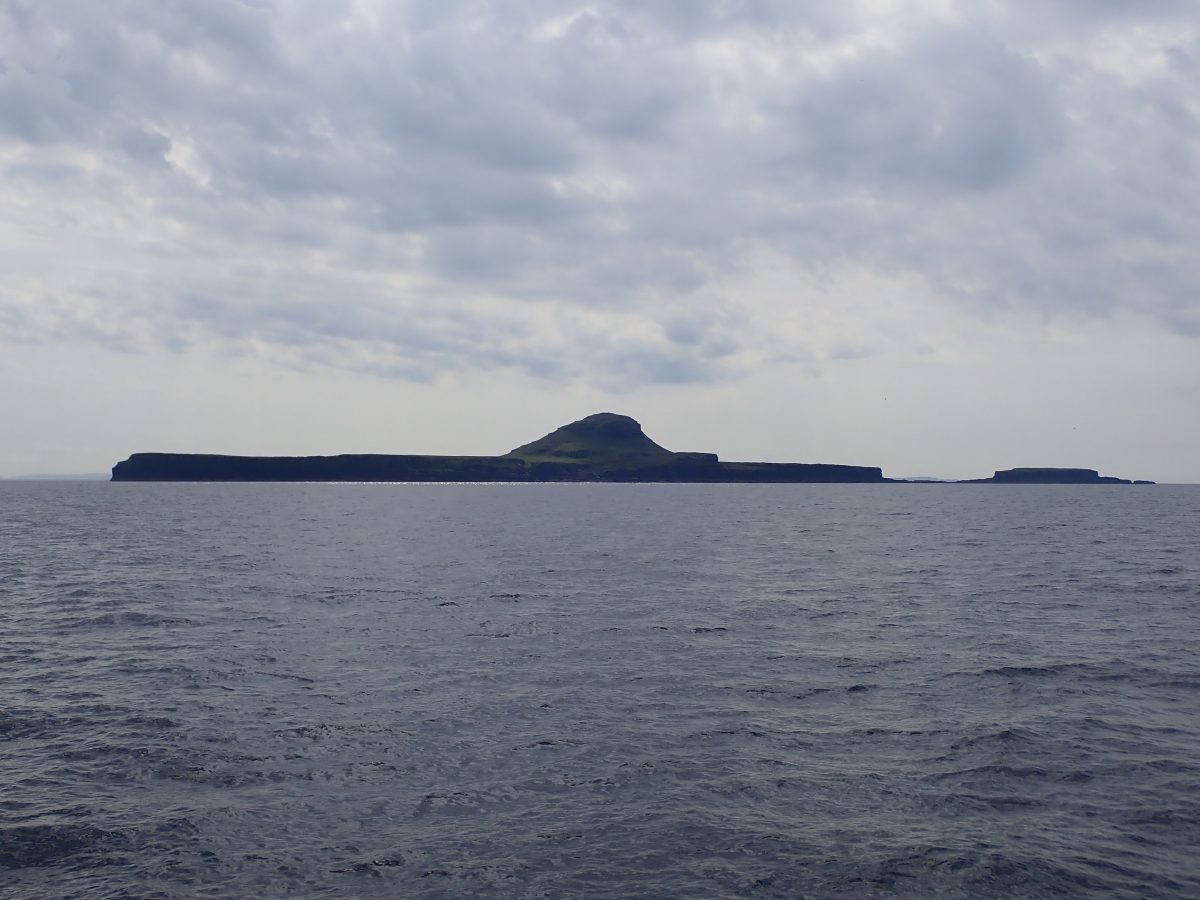 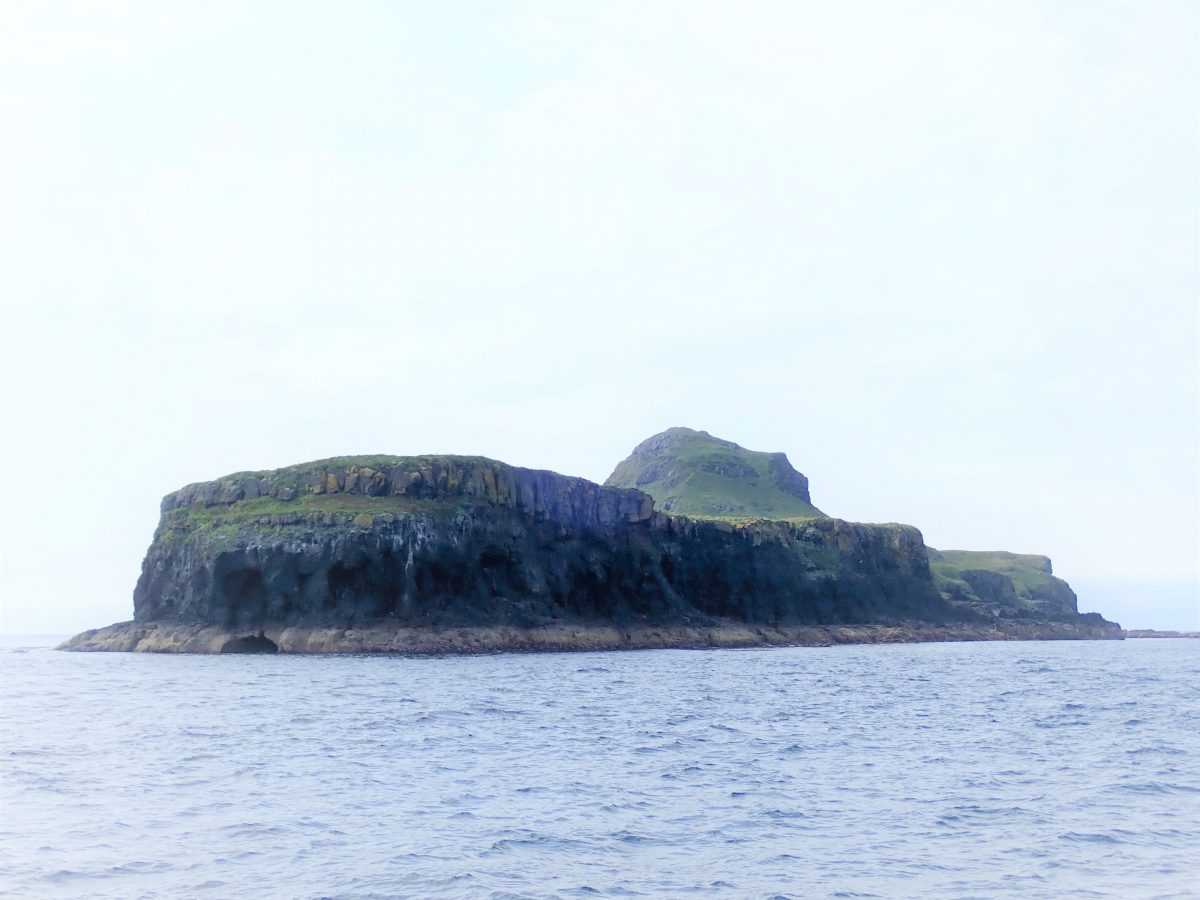 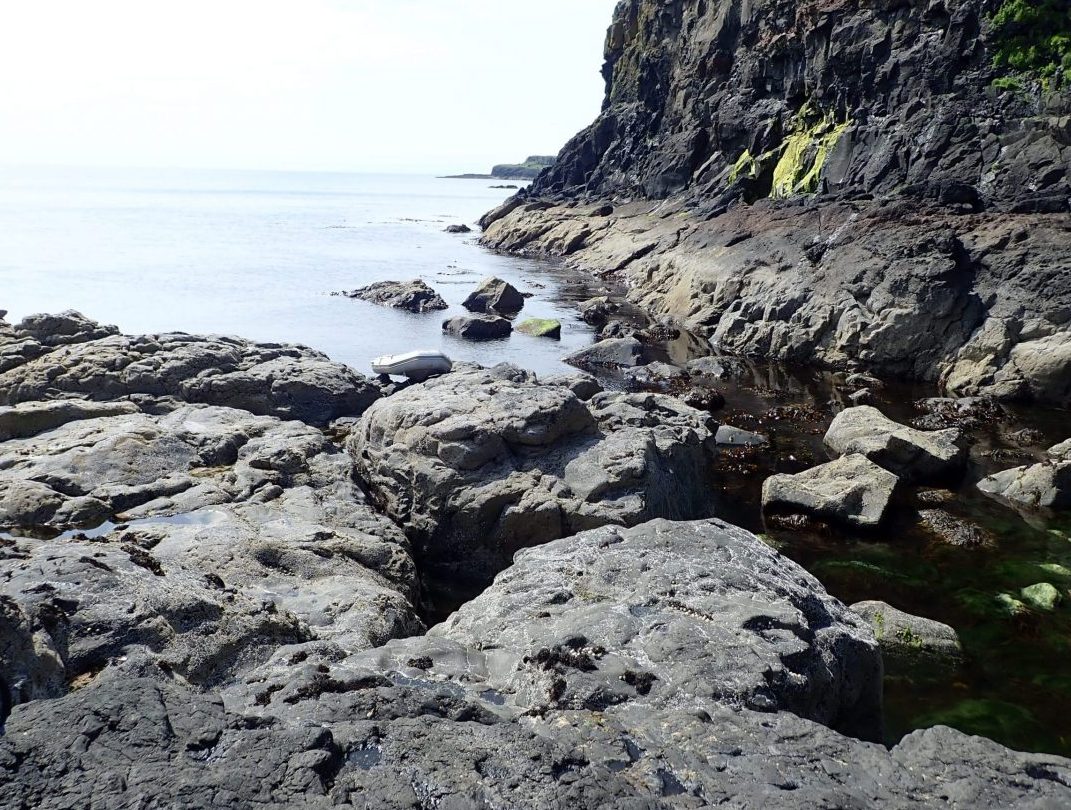 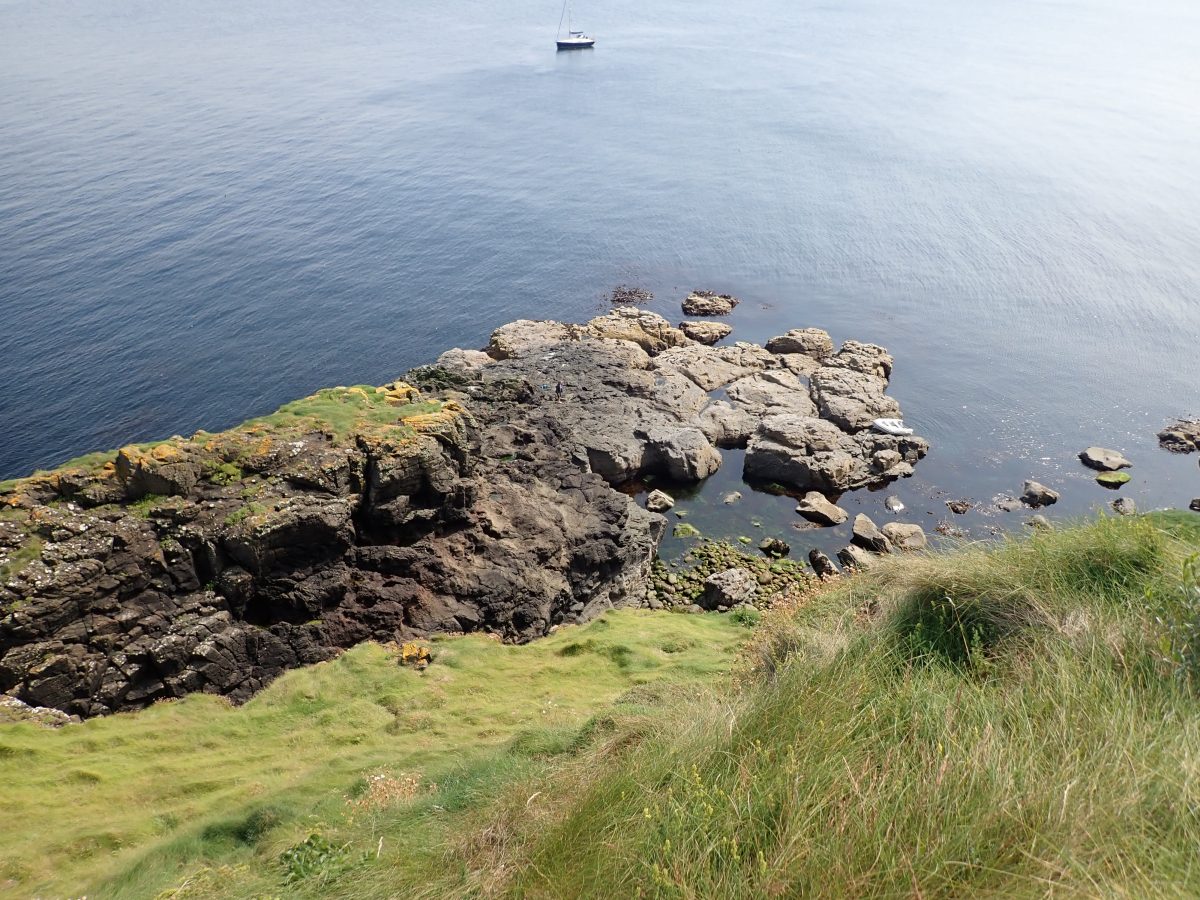 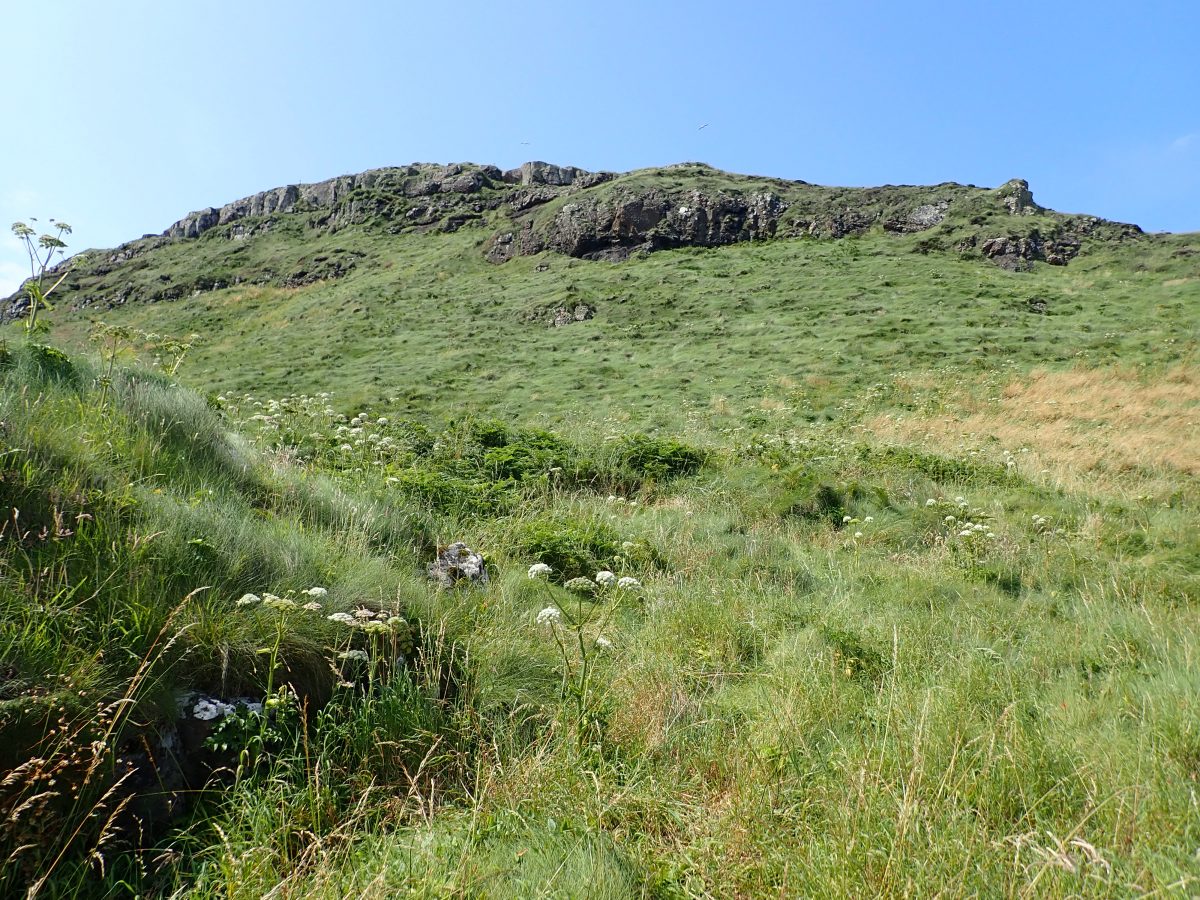 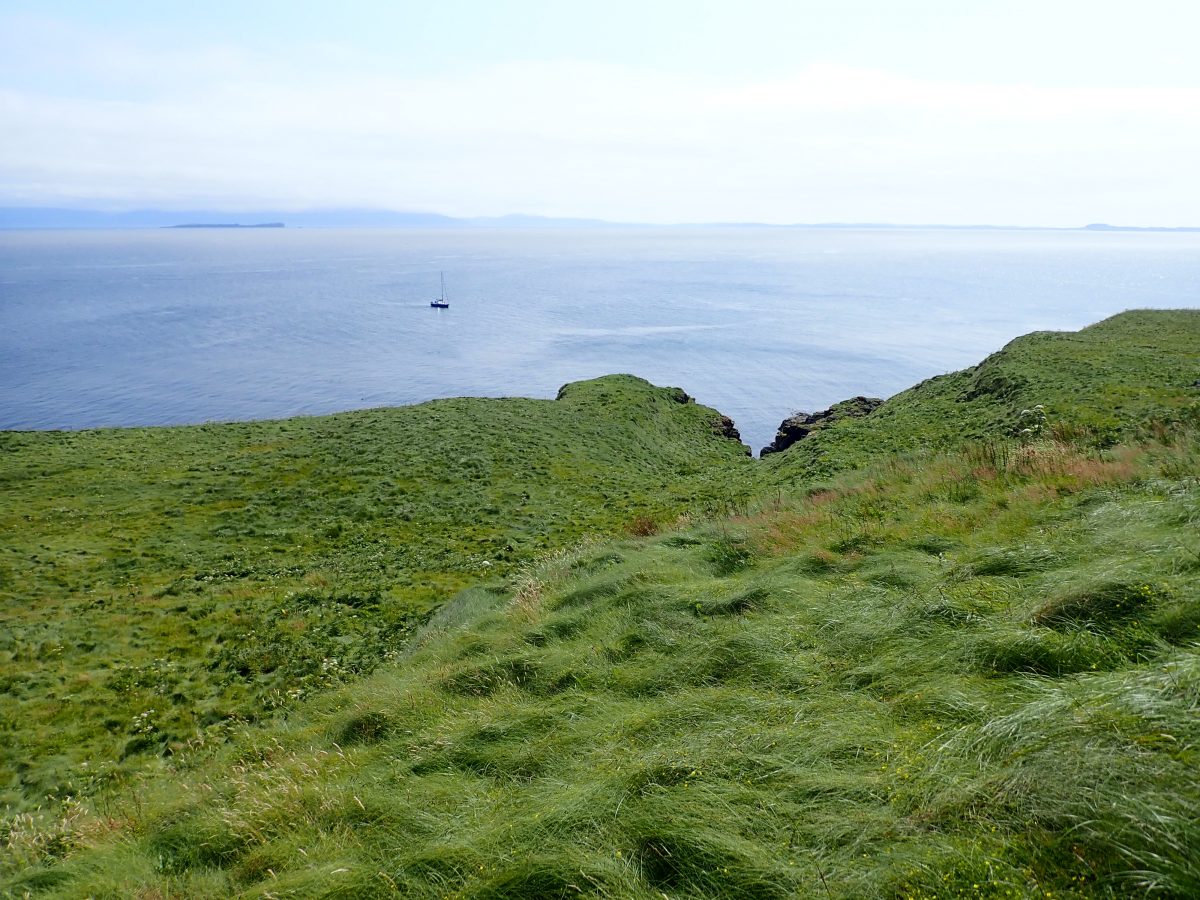 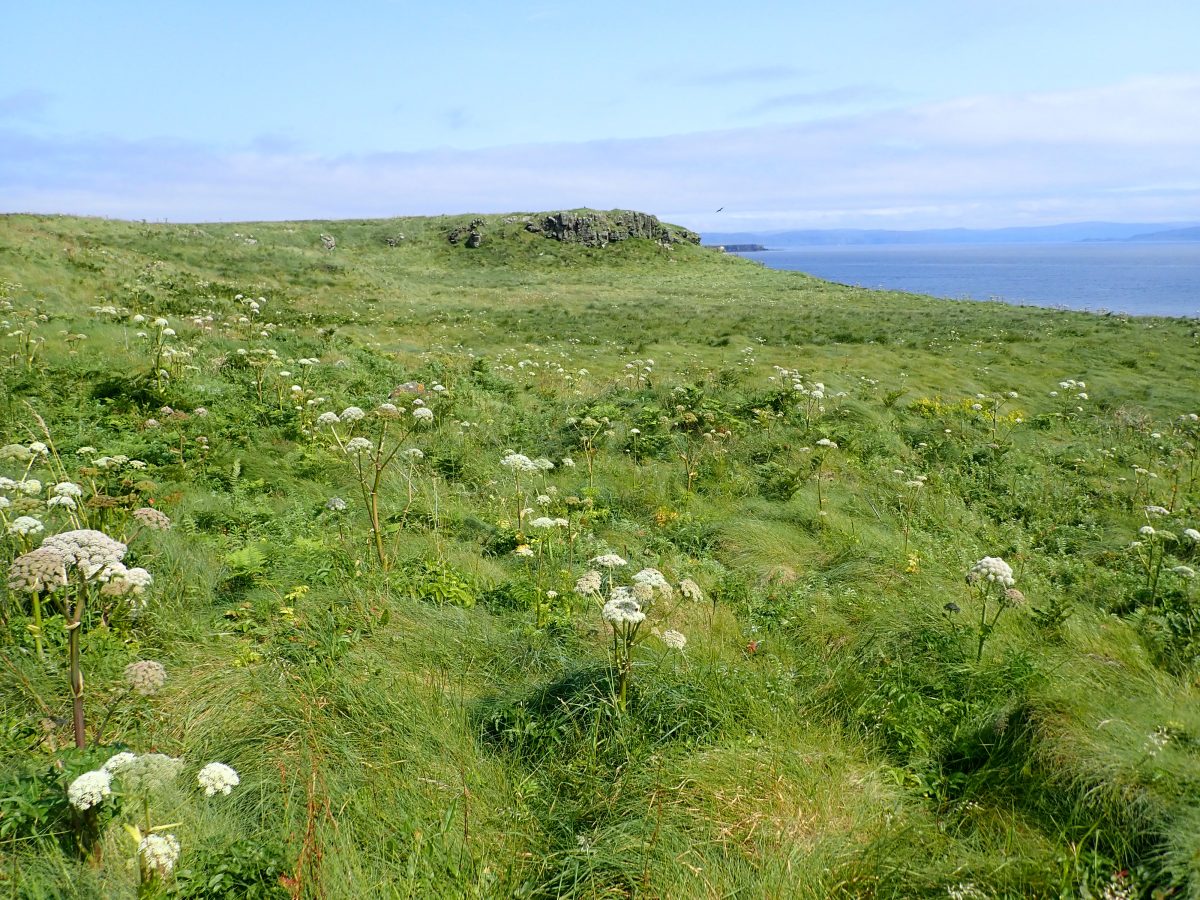 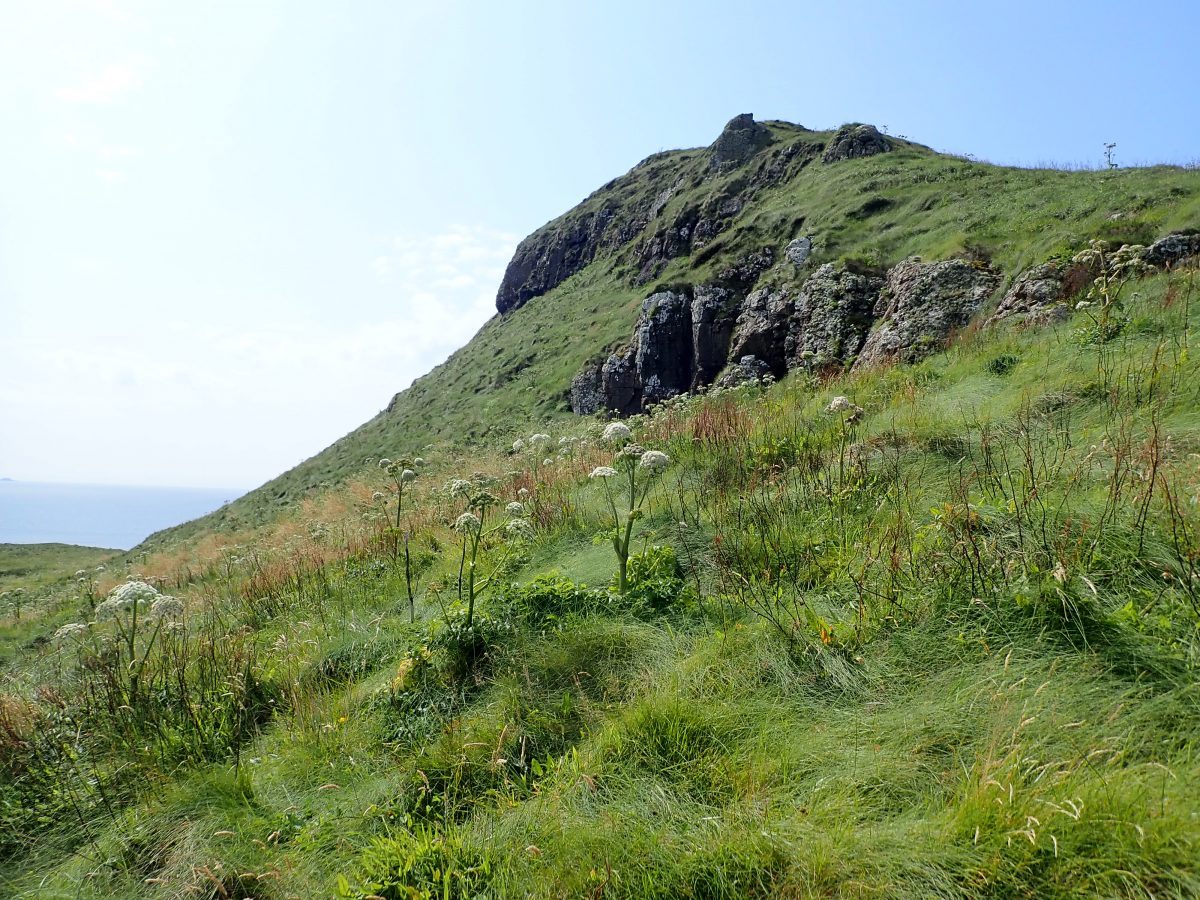 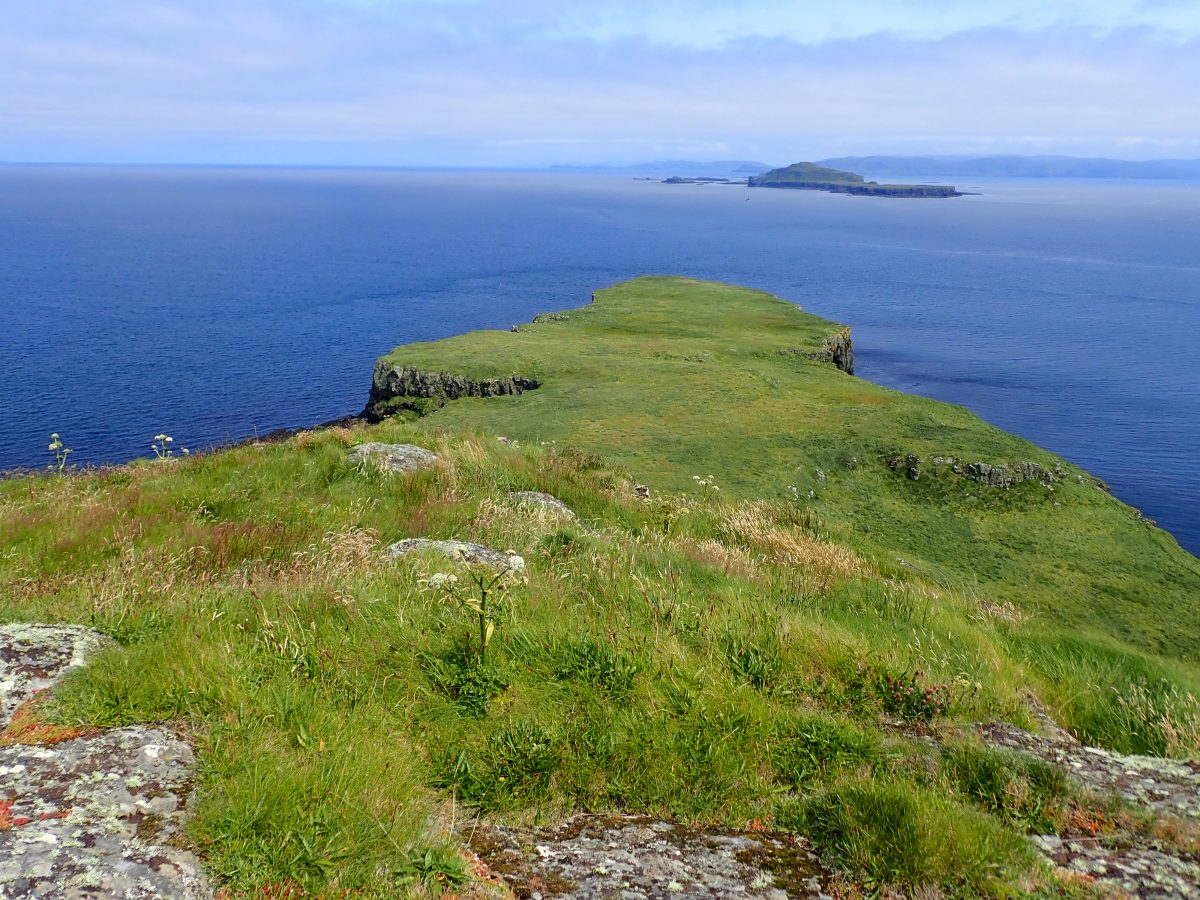 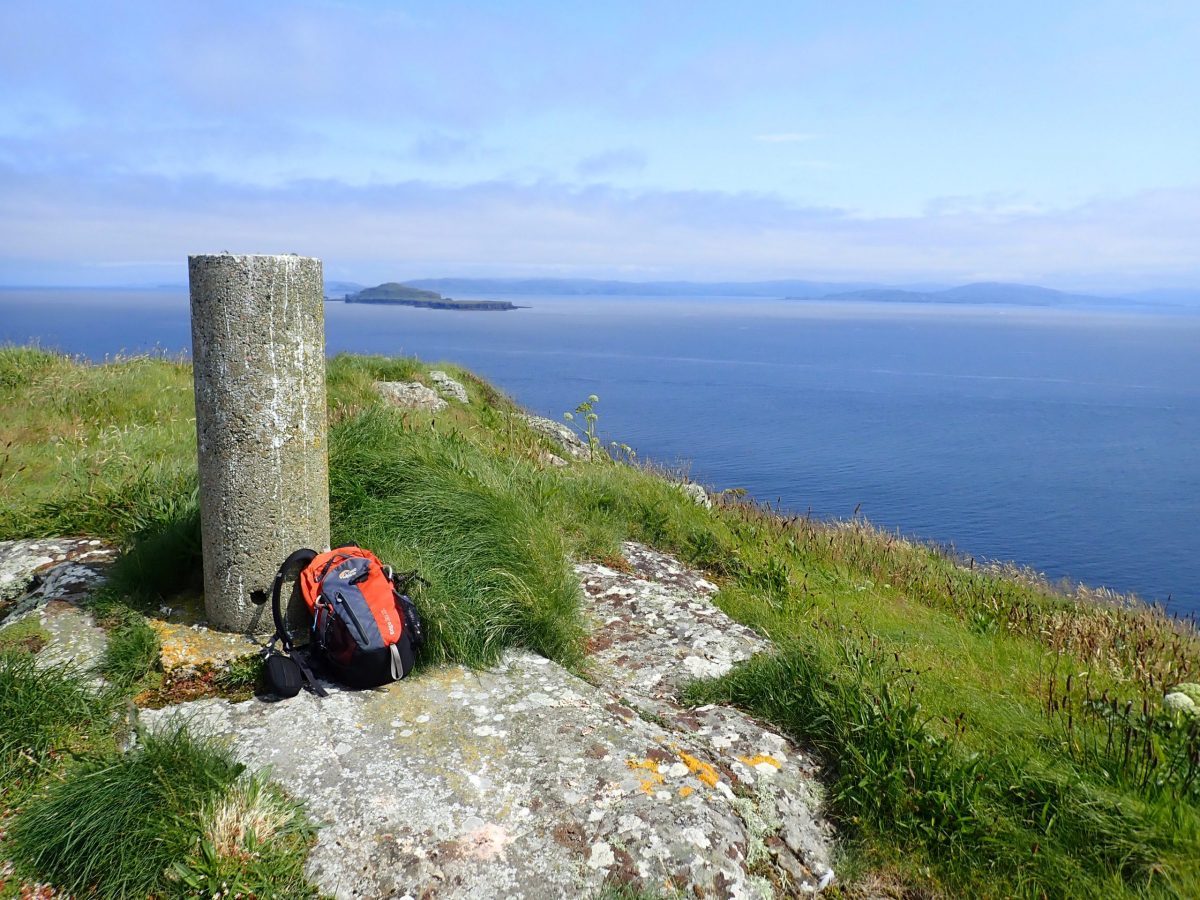 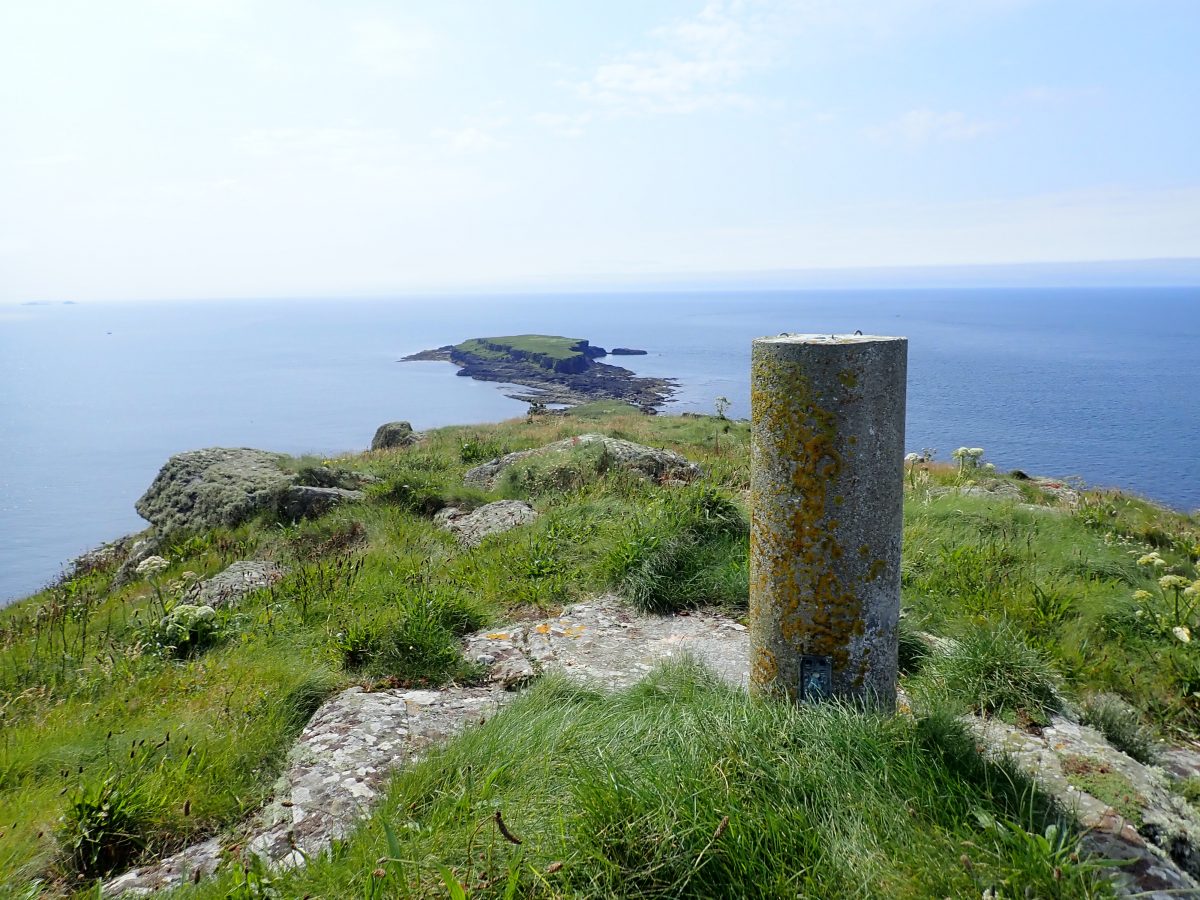 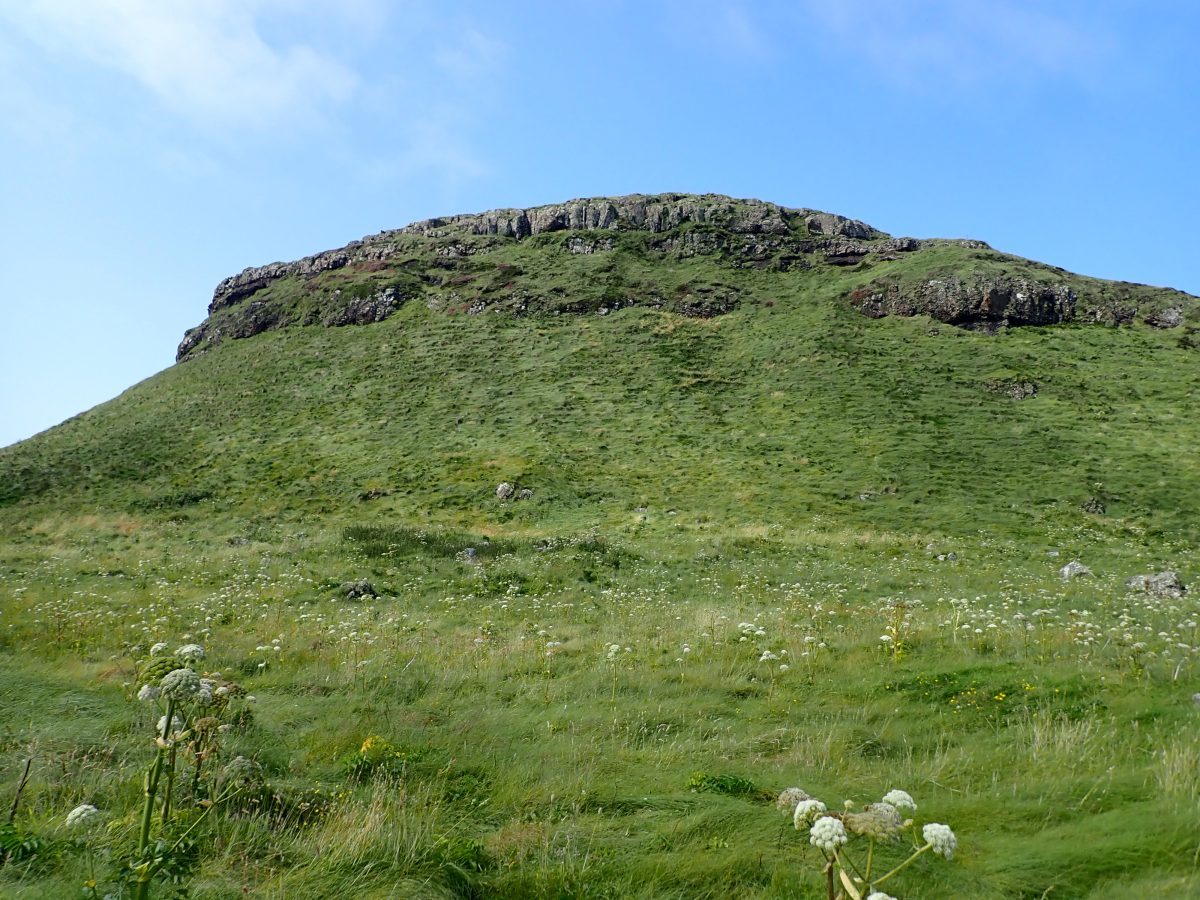 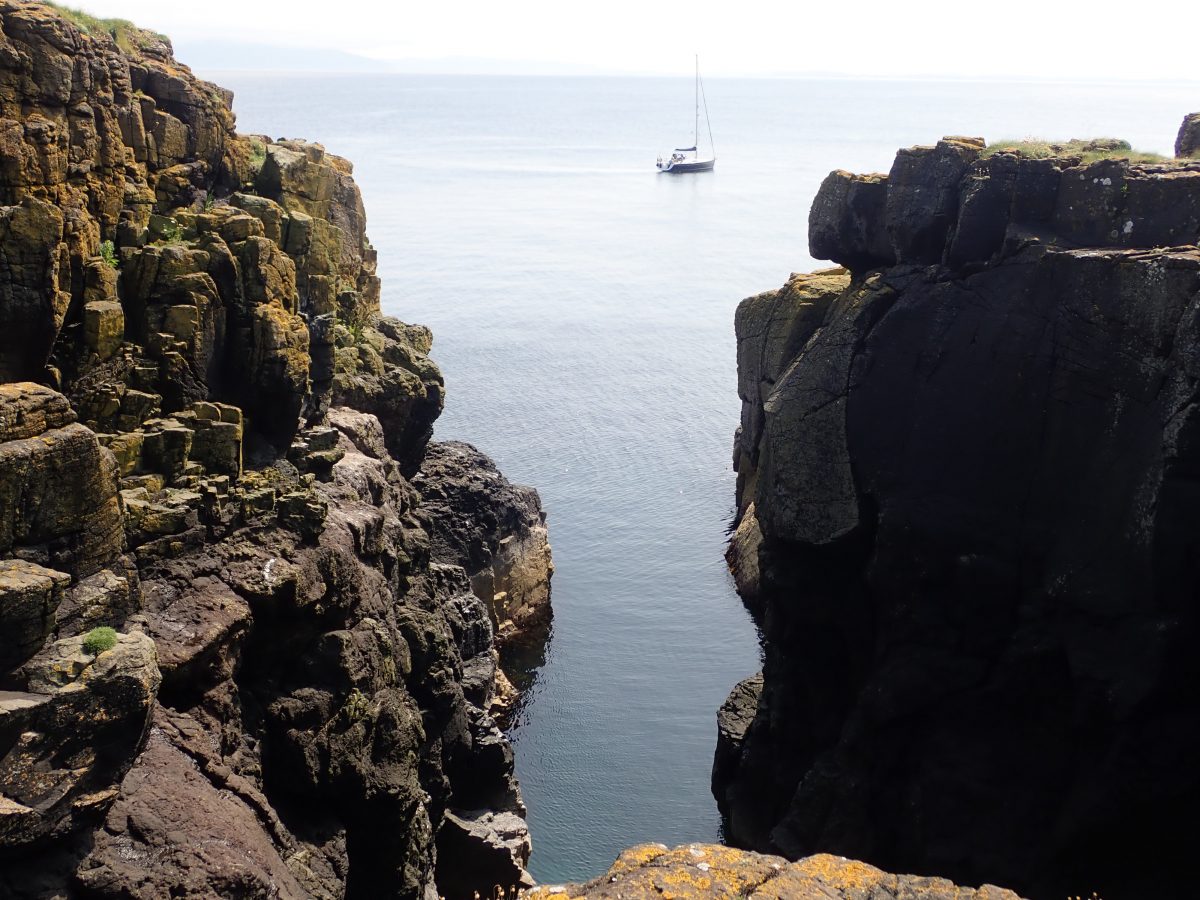 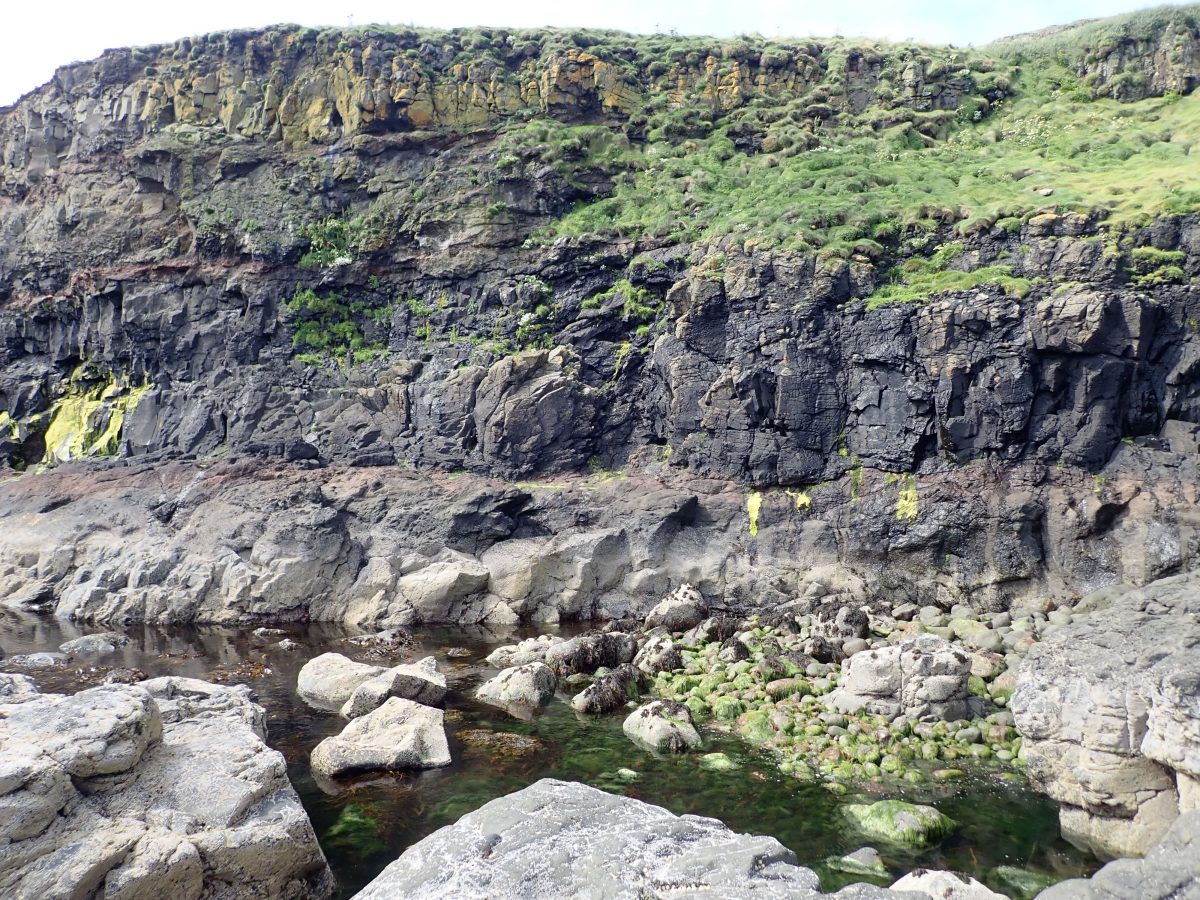 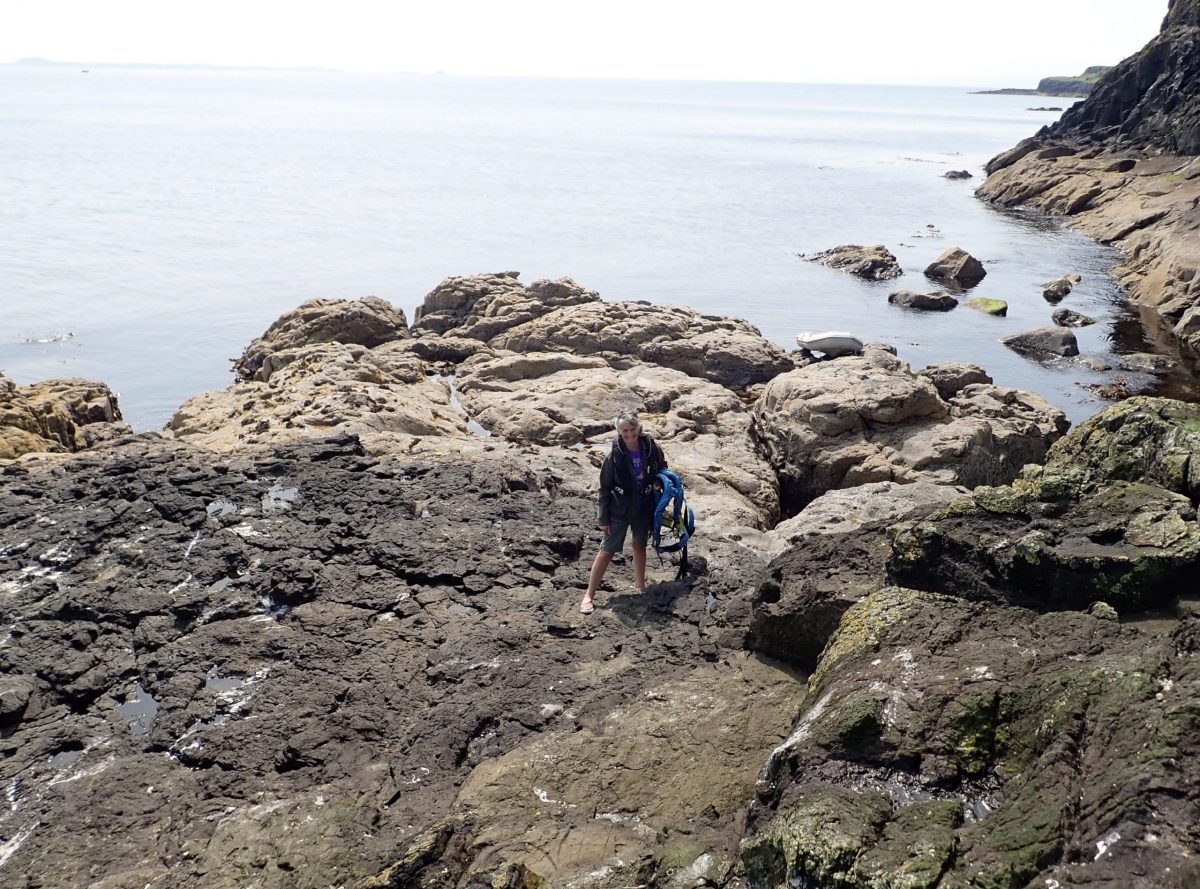 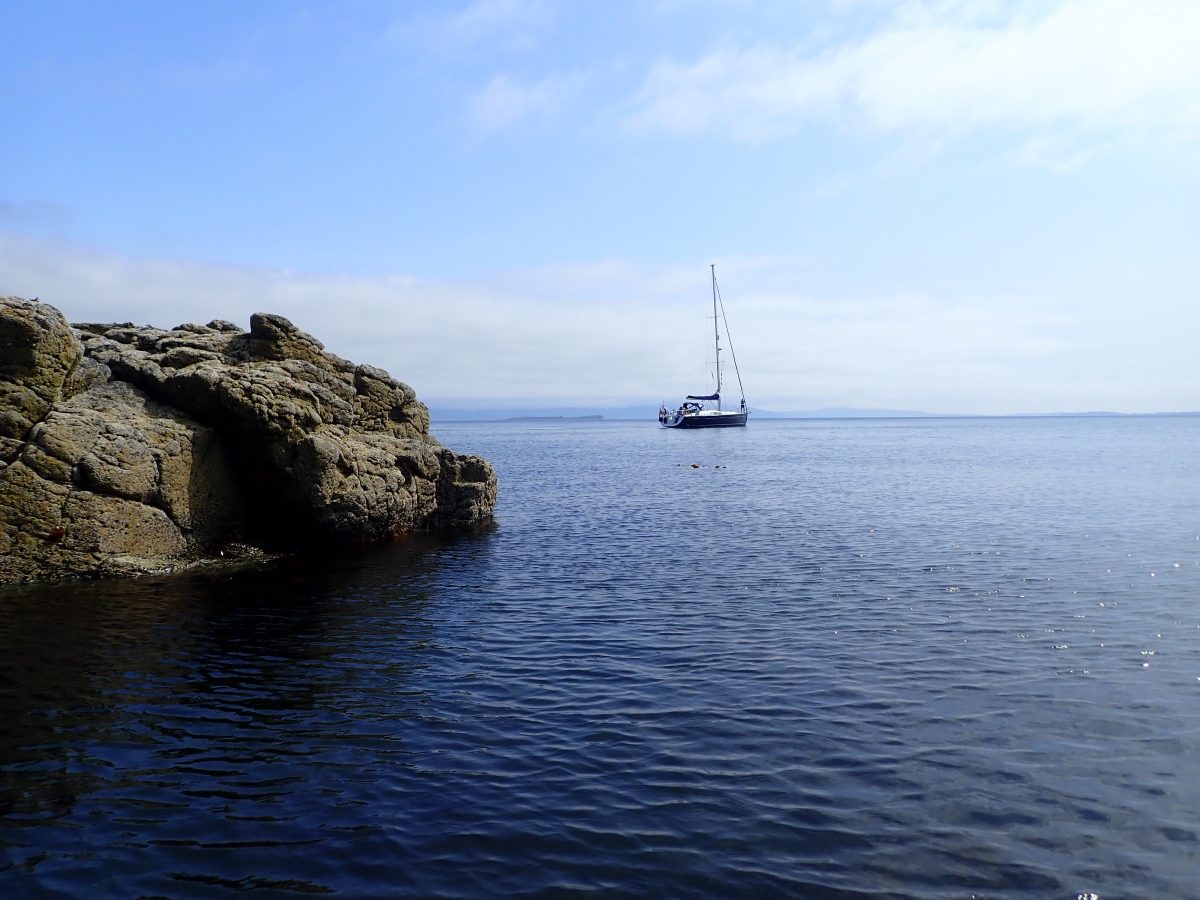