Longa is an uninhabited island sitting at the north west corner of Loch Gairloch. It was home to the Norse, supported a strong community and even a shipping company.

The uninhabited island of Longa is located at the mouth of Loch Gairloch, Wester Ross. It is 126 ha (311 acres) and at Druim am Eilean reaches a height of 70m (230 feet) and is mainly of sandstone. The island is now uninhabited however in the 19th Century Longa supported a small fishing community of 31 islanders. It seems remarkable that such a small island could support so many. It must be remembered that livings would be from the sea and not much from the land itself. On the south facing slopes there remains the form of lazy beds in the deep un grazed grass.

The favoured anchorage for Longa is the north bay of Camas nam Rainich (bracken bay) but on my landing there was a slight northerly breeze so I elected to drop the hook in Eag Mhor (the big notch) that faces seaward at the south west corner of Longa.

The surroundings were simply stunning, it was a blue day and Longa looked so inviting. The anchor set straight away and as I was on my own. I chose a spot right in the middle of the bay rather than being too clever and anchoring close to the shore.  As a result of having the anchorage to myself so there was no restriction of choice. Ahead lay a wonderful boulder beach and astern the open sea and in the distance the majestic Cullins of Skye.

After a short paddle in the dinghy I set foot on Longa and was immediately shocked at what I saw. The high-water line across the bay was littered with fishing tackle debris, boxes, crates, buckets and even the carcass of a defunct Hendry Hoover. As a result of being a south facing bay on an uninhabited island facing away from the populated beaches Eag Mhor provided a depressing picture of what is asphyxiating the natural wonders of our seas.

Determined not to get too upset I set off to run Longa in a clockwise direction.

The first rise was a delight of dancing bog cotton, grasslands, and patches of bared sandstone. Firstly I made for Carr Mor summit, the hill to the west of the Longa and stood to marvel at Eag Mhor and Trade Winds sitting peacefully in the bay.

I ran on across the plateau to short grass and heather to the rise overlooking the north bay of Camas nam Rainich. As a consequence of being a sailor I studied the bay and took several photos.  That done if I was looking for a safe anchorage in a south westerly I would have some prior knowledge of the layout of the un-light bay.

Afterwards I set off towards the high point of Druim an Eilean. I was not far on my way when a Skua dive bombed me and swerved skyward. This manoeuvre no doubt setting up another swoop at me. It was late June and the Skuas would be hatching. Momma bird was in no mood to allow me unfettered roaming of the nursery grounds. As a result I had over a dozen Skuas in flight swooping and squawking at me. Having been dealt a significant blow on the head by an angry Fair Isle Bonxie I was not wishing to impose myself on the Longa residents. As it was their time and I felt I should extract myself as soon as possible.

I made for the top, quickly took my images and film, and made a hasty retreat. As a result of these encounters I decided not to progress on the east of the island where the remains of the dwellings are located. My take on the situation and timing of my visit was to beat a retreat and leave the residents in peace.

I made my way down the south slope and came across the remains of lazy bed furrows and heaped banks. The aspect for the beds was due south on a slope of about 30 degrees, almost the ideal position for well sunned crops.

On my way across the slope I was conscious of a high-pitched buzzing sound. To my despair I could see a drone flying high in amongst the circling skuas and gulls. Perched by a rock was the pilot and rushing away and back to him was a golden Labrador. I paused, do I intervene and get a punch on the face or head back the unsupervised anchored yacht? Thankfully I chose the latter and cursing the man I ran on back along the Creagan Ruadh shore to Eag Mhor. To my relief the boat had not moved since being abandoned to its own devices.

Picking my way through the high tide line detritus and I made for the dinghy. Before heading out the Trade Winds I played around with my Go Pro camera recording some wonderful footage of the pure and crystal-clear waters. Having not come off the beach empty handed I stuffed a black bin liner of discarded nets and rope into a locker for appropriate disposal.

The traditional anchorage for Longa is Camas nam Rainich to the NW corner. This landing coincided with a light northerly breeze so I decided to anchor in Eag Mhor bay. The bay is completely open to the south offering no shelter to easterly, southerly or westerly winds. But today it offered a wonderful shallowing bay with plenty of room to swing on the anchor. Knowing the boat would be on its own for a good hour or so I anchored well off in 10m or water with masses of room for her to swing on the breeze. The anchor lifted clean as a whistle with little weed  and we had not moved an inch. Eag Mhor is a great alternative to Camas nam Rainich.

The following has been supplied by Ian McWhinnie of Dry Island, Badachro.

Longa or its derivatives longay or lingay is a relatively common name in Scottish waters, it is of Norse origin and means ship or longship island.

Though Norse names abound there are very little Viking remains probably because of them being temporary dwellings. On the south facing bay there are four dykes pointing north leading down to the beach. These were used for storing the longships in winter. It might seem an odd place to store boats when there are rather more sheltered places on the island but this comes from a Norse tradition of always launching a boat bow first so the boats were dragged over to the other side of the island to be launched bow first.

In more recent times a more permanent population lived on Longa for many hundred years. Most of the houses were at the Coalas Beg where they would get good shelter from the prevailing winds, though there are 2 houses on the south shore near Loch an Eilean though only Loch on the island.

At one time towards the 1860s there was as many as 60 people living on Longa.

The most prominent family living on Longa were the Macintyres who ran a small shipping company trading up and down the west coast, the boat they used was called the “Black Diamond.” Remains can be seen at South Strome besides the old ferry slip.

At that time everything came by sea up and down the coast so living on an island would be neither here nor there.

Not long after that steamers started visiting Gairloch so the Macintyres may have decided to move closer to Gairloch. Schooling was becoming more important and though there were many schools and side schools being opened in the area including one on Isle Horisdale.

It would seem thought probably by the mid-1880s Longa had been abandoned. The other reason for this was probably that rather than a subsistence living cash was starting to become more important. People would gravitate to places like Badachro where the fish curing industry was in full swing attracting the usual  flotsam with prostitution and illegal drinking dens springing up.

But in an interesting aside the Macintyres went on to become successful business men in the area. One of their descendants was killed in the battle of Jutland He was a ships surgeon called Ebenezer Macintyre and was washed ashore in Norway and is still buried in Tonsburg cemetery.

During the second World War there was an Indian army company based at Loch Ewe. On a week-long exercise on Longa during the war the small flock of goats disappeared, no doubt the curry was excellent that week!

Moving on to 1960 another Macintyre, the local grocer was out fishing with four friends off Longa when their dinghy capsized on a flat calm summers day four of them drowned the only one who survived was a non-swimmer who stayed with the boat. 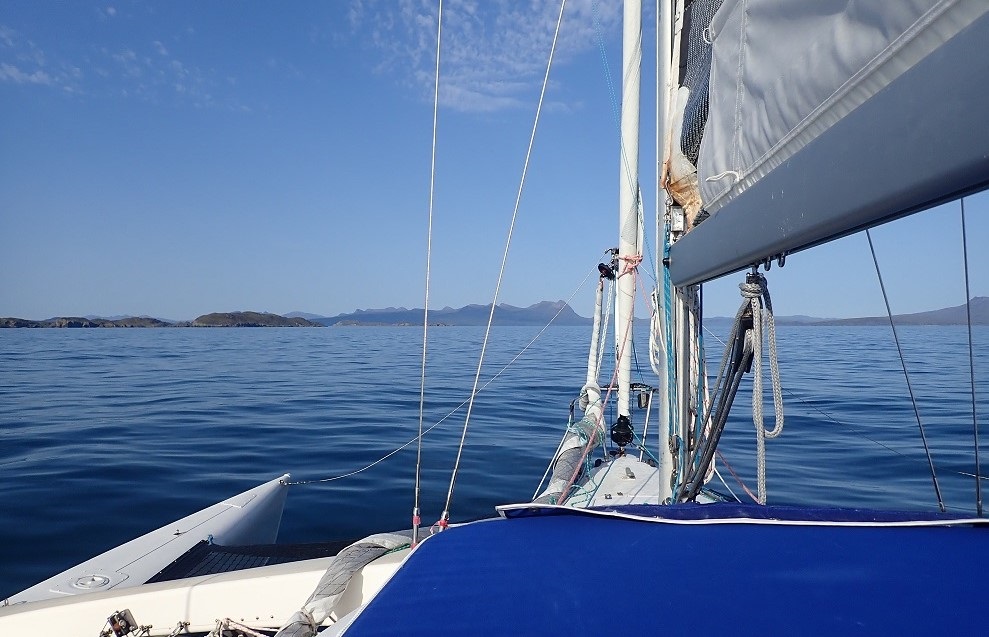 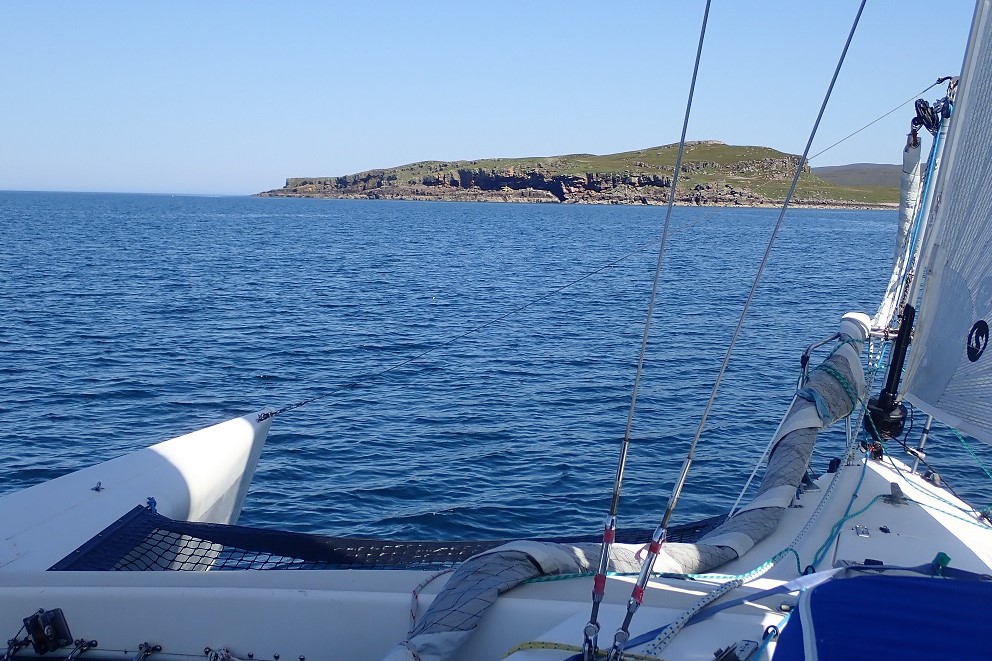 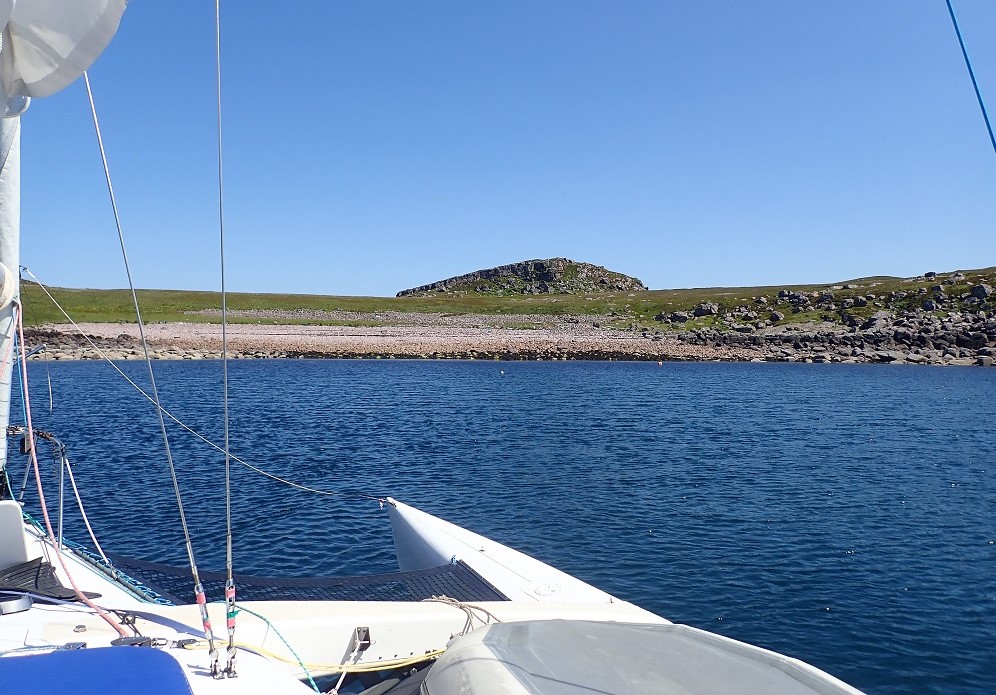 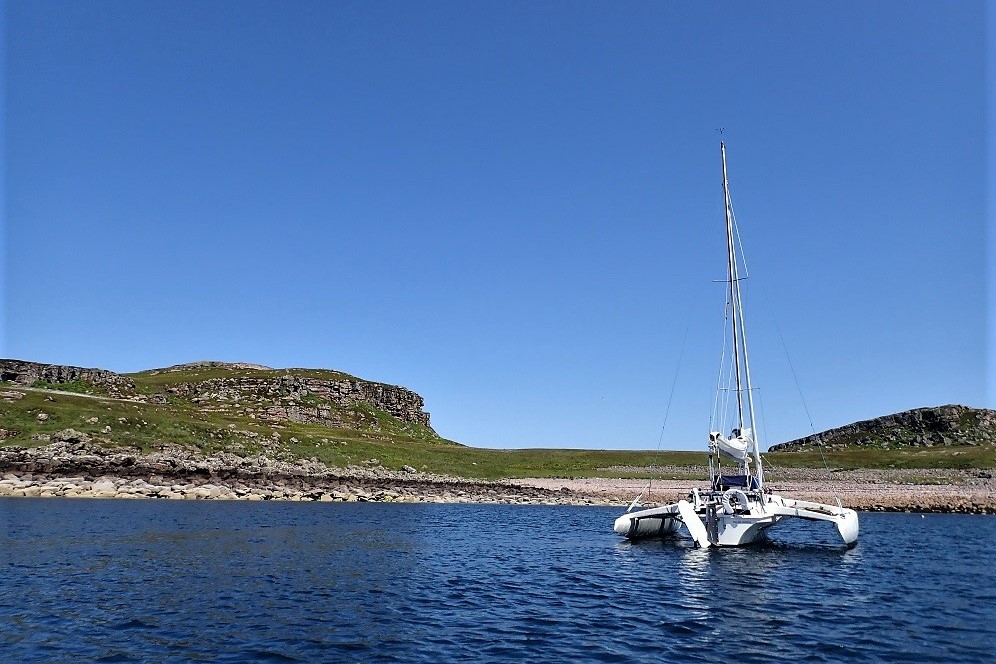 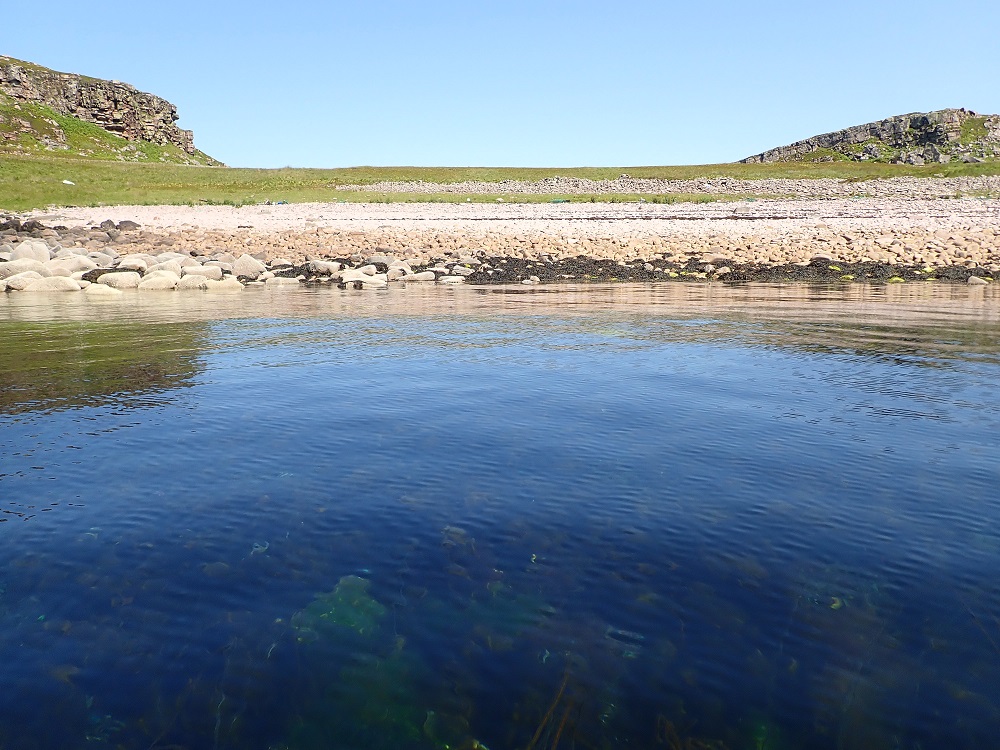 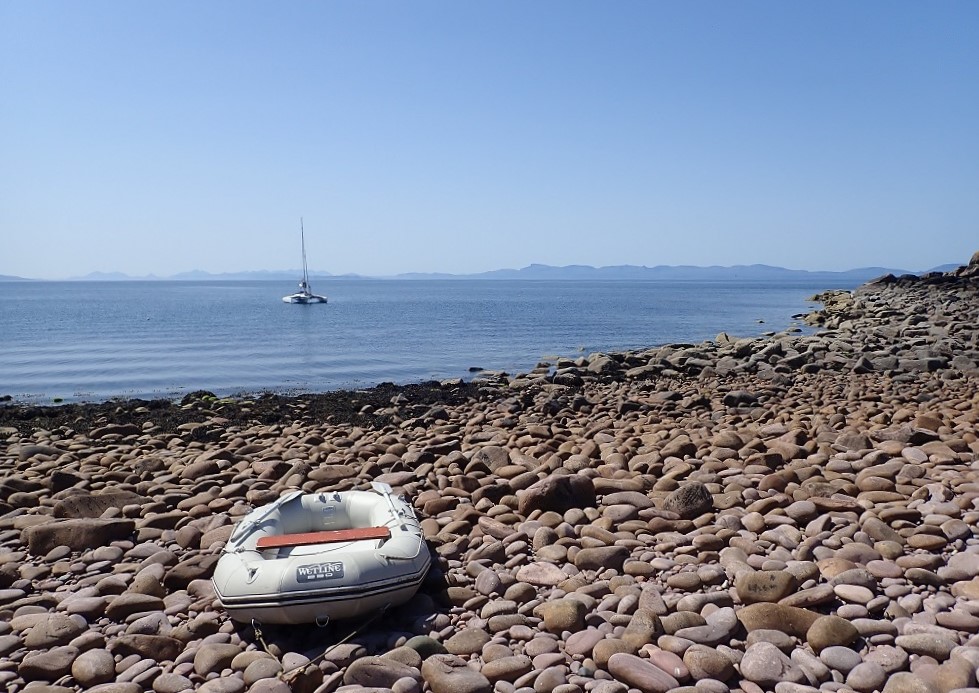 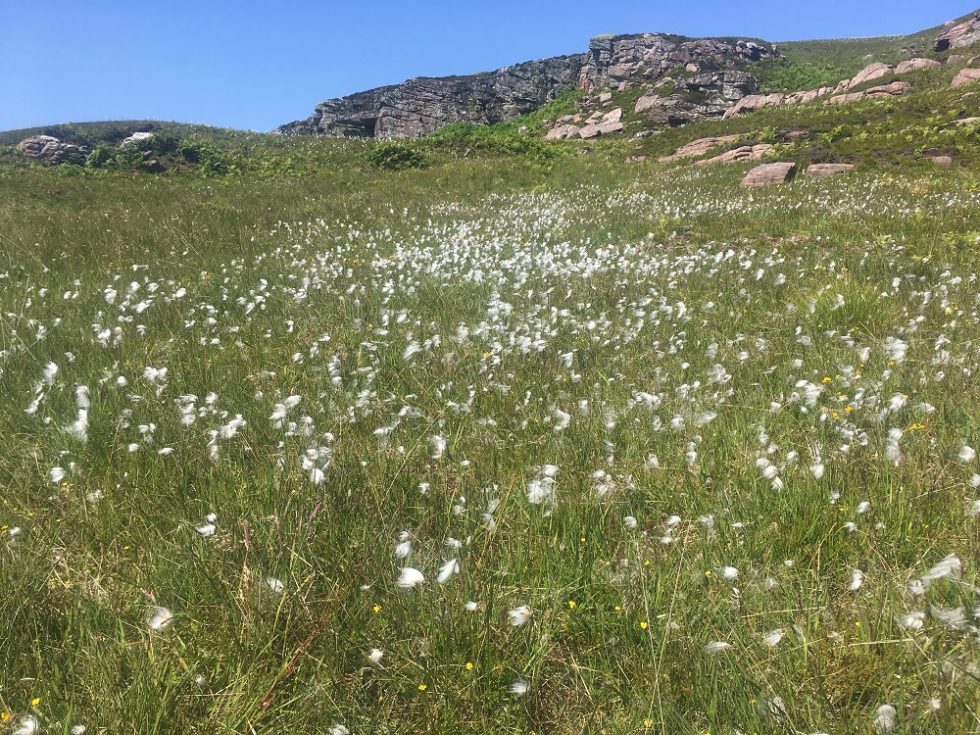 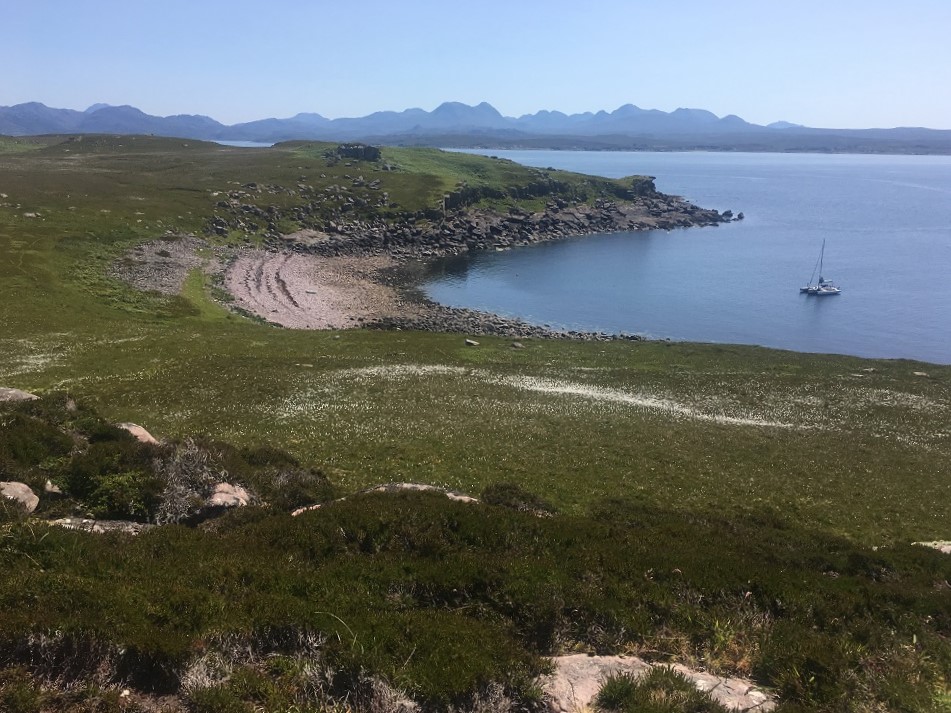 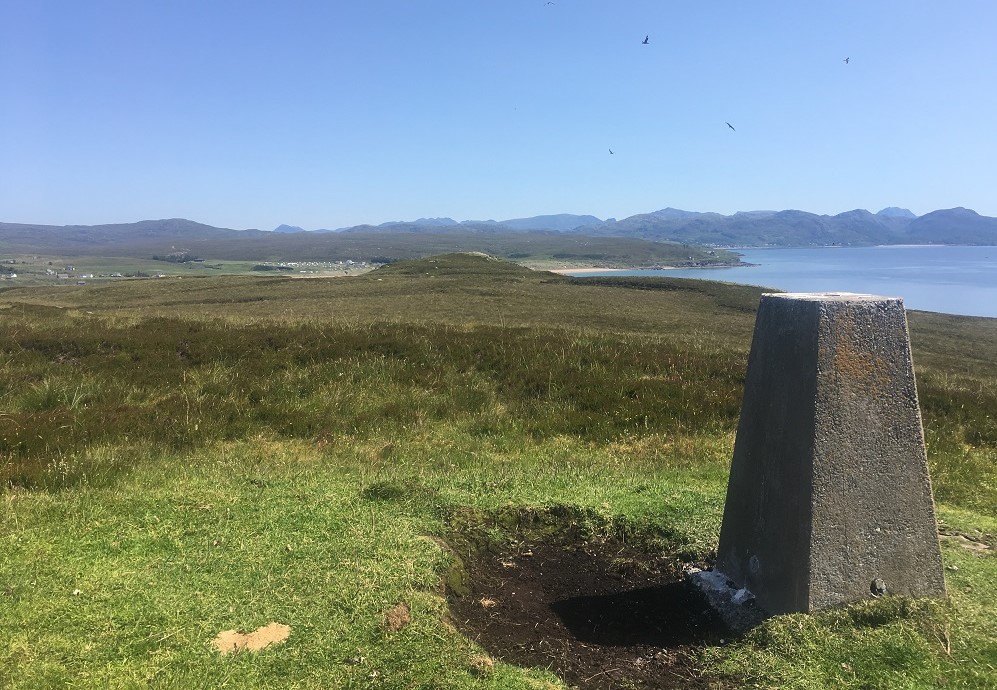 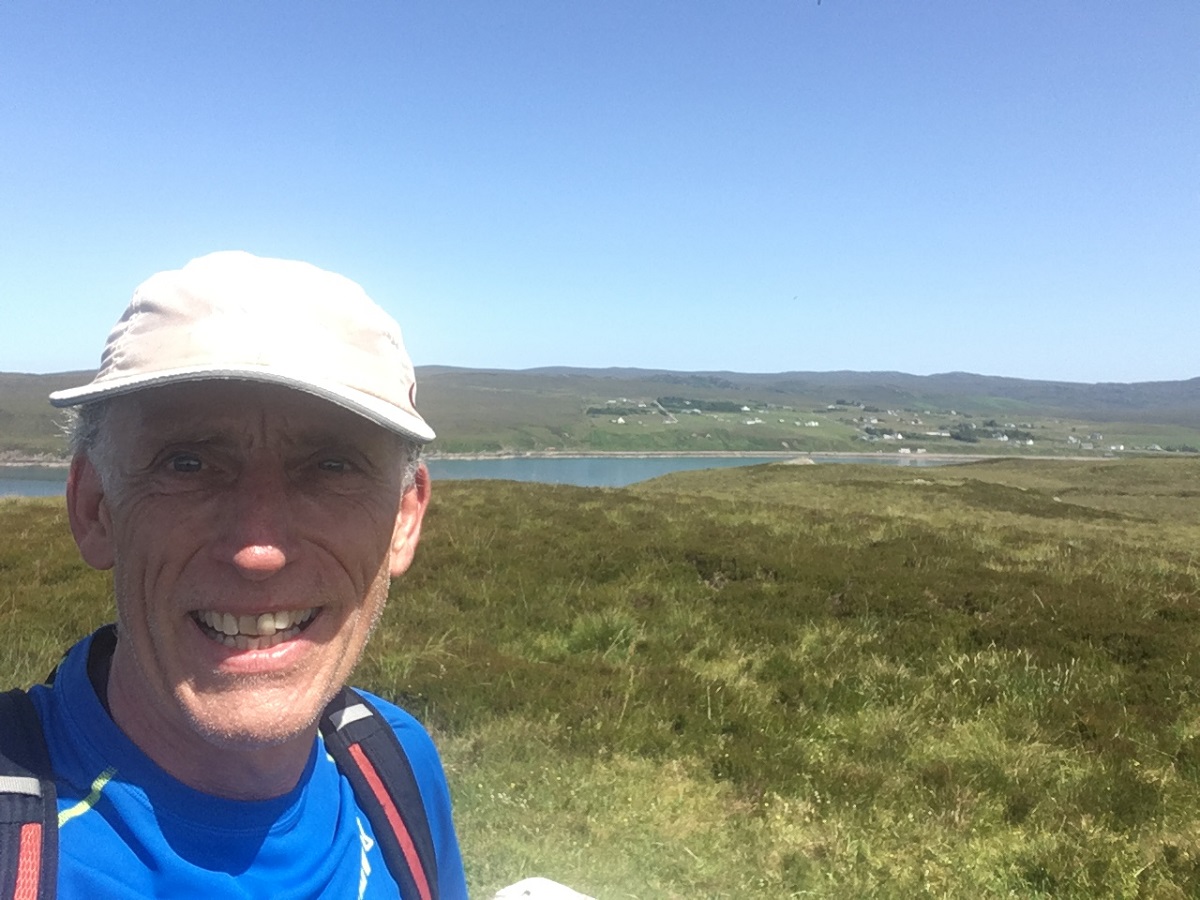 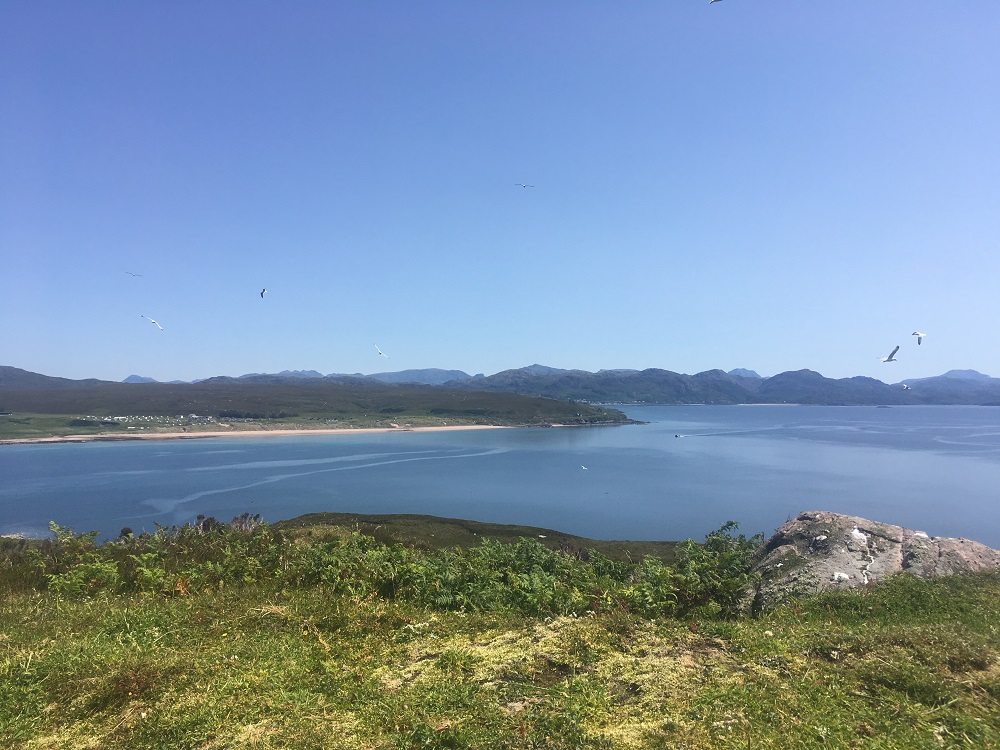 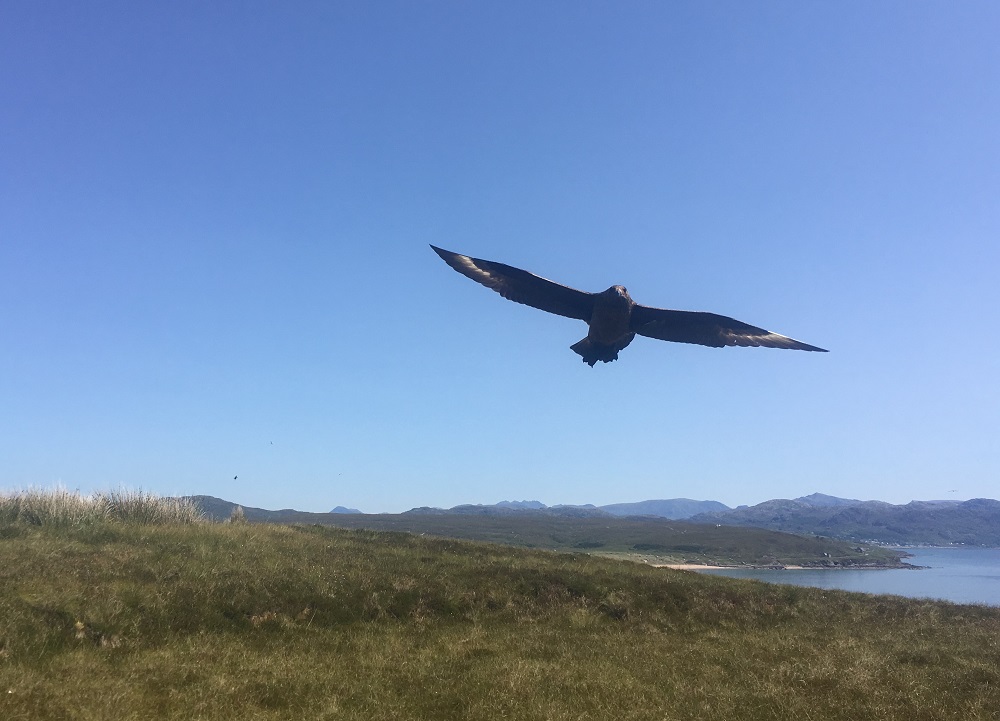 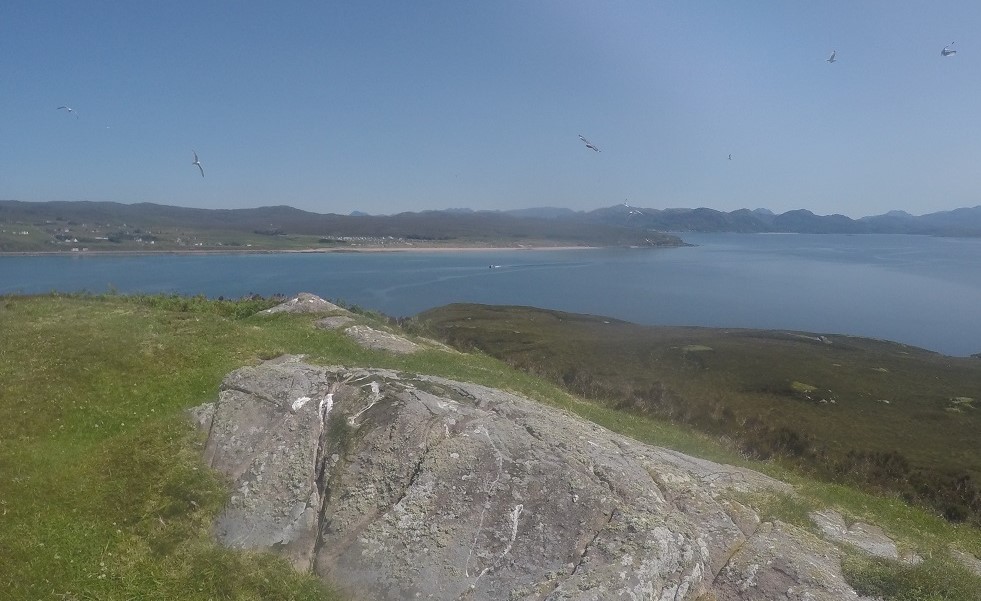 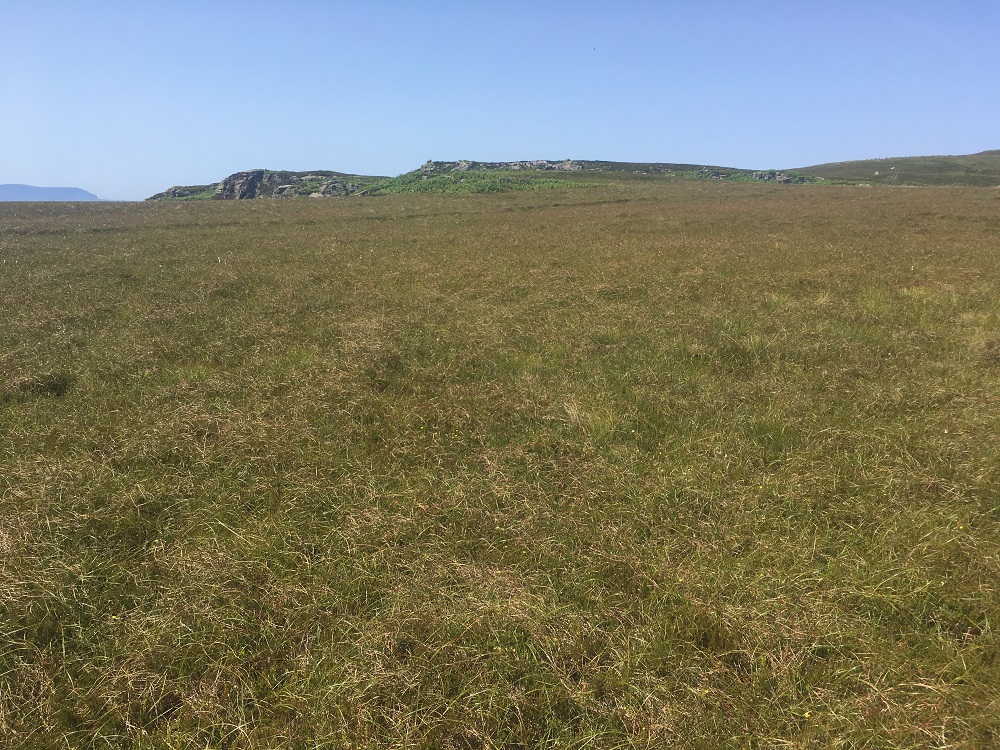 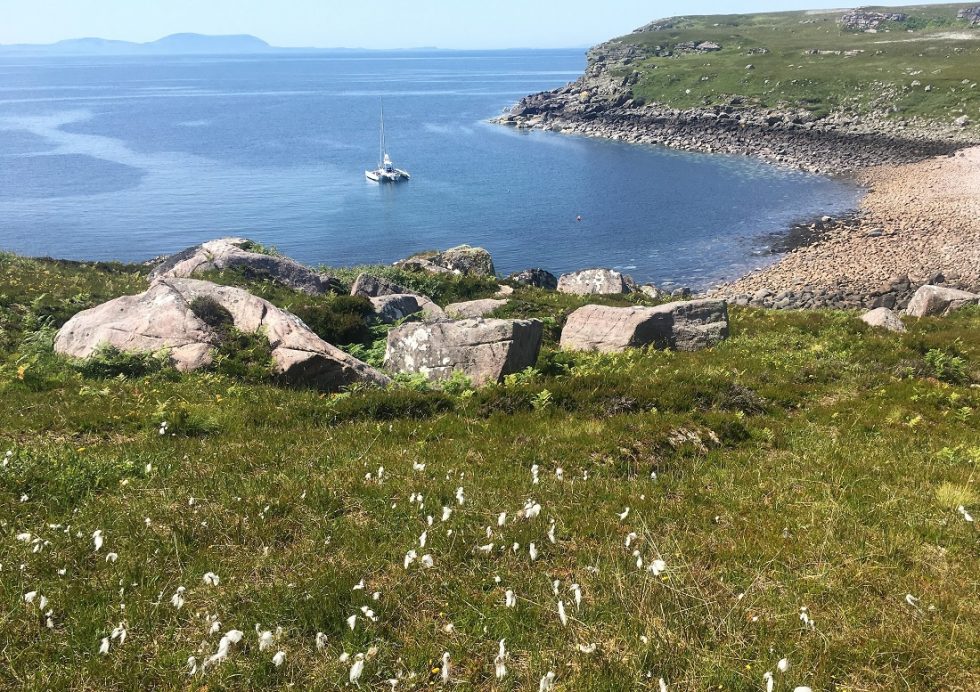 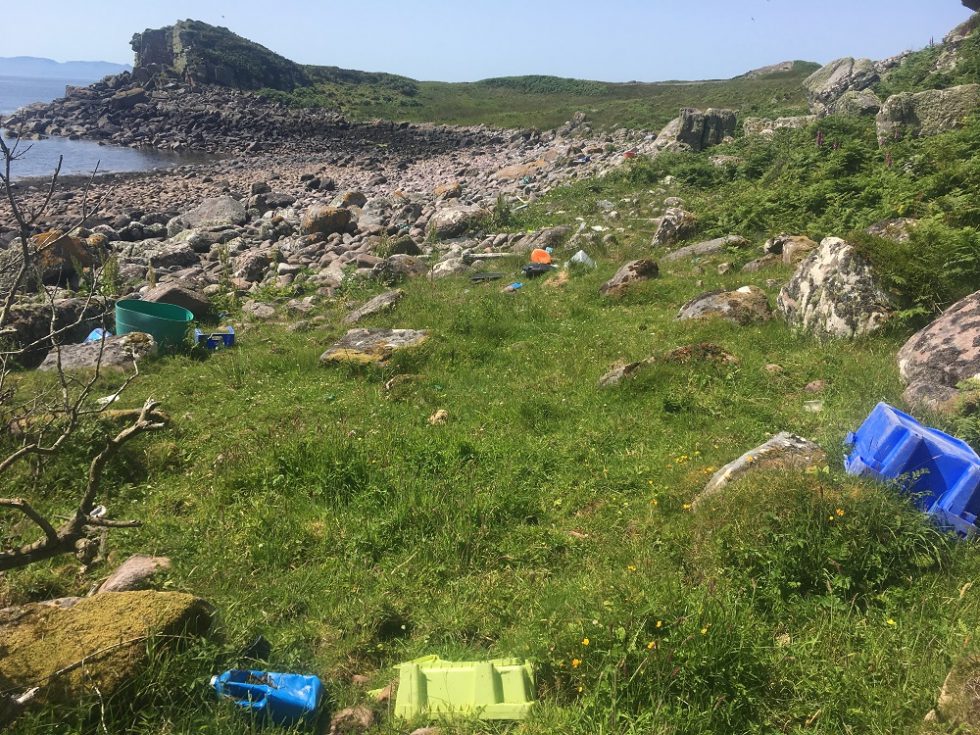 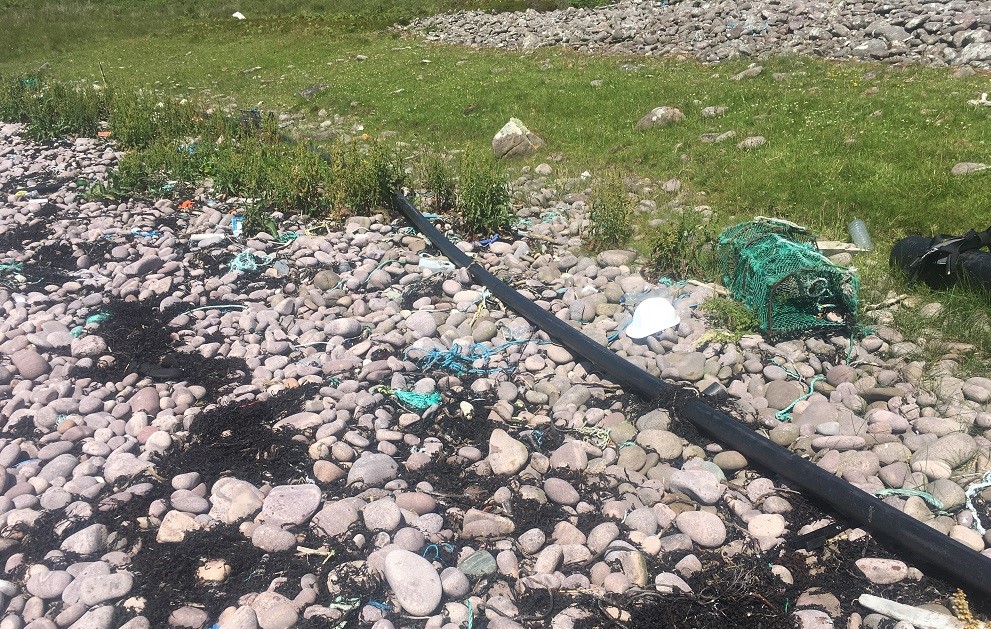