The island of Handa (Scottish Gaelic: Eilean Shannda) lies off the west coast of  Sutherland north west Scotland. The island’s name Handa is of mixed Gaelic and Norse origin and means “island at the sandy river”.

Torridonian sandstone cliffs rise from the Atlantic to create the island of Handa. Each summer, nearly 100,000 seabirds breed on Handa, including internationally important numbers of guillemots, razorbills and great skuas.

Handa is 309 hectares (1.19 sq. mi) and 123 metres (404 ft) at its highest point. Handa is made from layers of Torirdonian sandstone set aside from the mainland ancient gneiss by the Sound of Handa.

In early times Handa was used as a burial ground by people from the mainland so as to avoid the graves being dug up by wolves. Handa had a similar social governance approach as developed on St Kilda and Mingulay. The oldest widow being ‘Queen’ and the men holding parliament to allocate the daily work. Handa had a population of 65 in 1841. However like many locations overpopulation combined with the potato famine of 1848 forced an evacuation to Nova Scotia. Its hard to understand how 65 souls could eek out an exitance on the island. The island has remained uninhabited since then with the ruins and still discernible lazy beds testament to the industry and labour of those hardy folks. 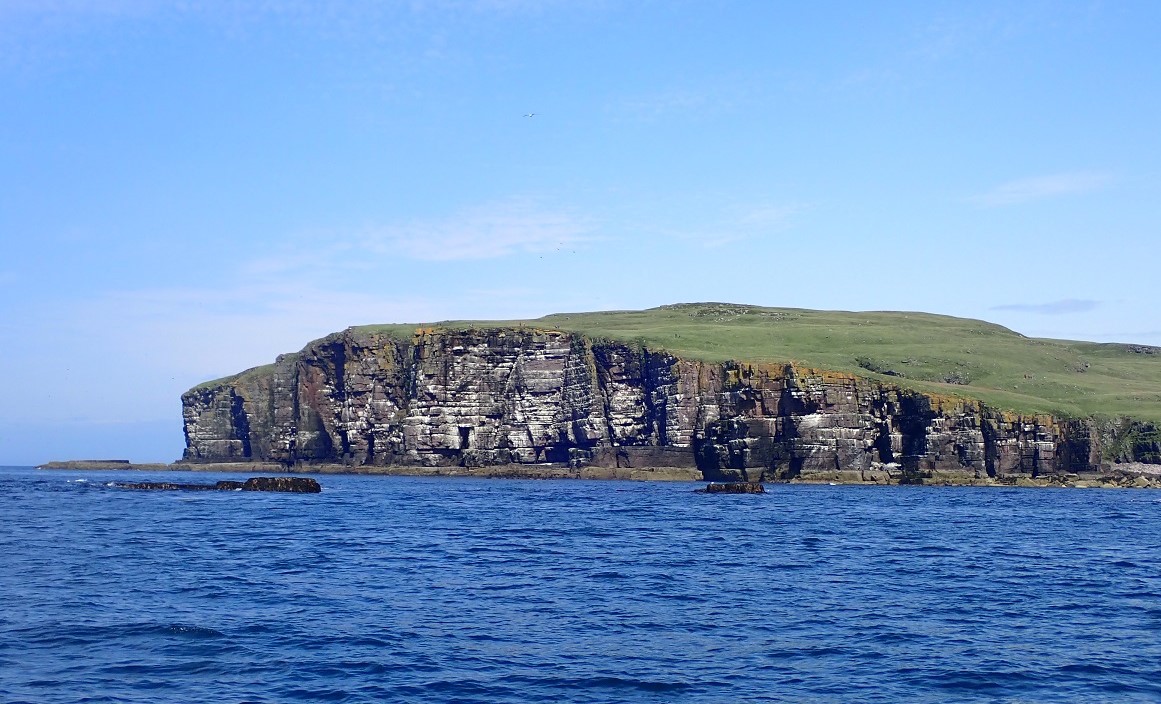 The island is of national importance for its birdlife and maritime vegetation and is a Scottish Wildlife Trust nature reserve. Handa is also a Site of Special Scientific Interest (SSSI) and a Special Protection Area (SPA). Handa also forms part of the North-West Sutherland national scenic area, one of 40 such areas in Scotland.

A small ferry sails to Handa from Tarbet on the mainland and boat trips operate to it from Fanagmore. The island receives around 5,000 visitors per annum.

Our visit by yacht

We had sailed from nearby Oldany Island to Handa, arriving to its south west facing sheer cliffs. The west coast of Scotland was at its ‘bluest best.’ Handa rose sheer out of the sea, layer after layer of ancient Torridonian sandstone stacked upwards to a verdant and vegetated top fringe. I nudged the boat to the foot of the cliffs as close as I dared, and we lay drifting in the slight swell that had wandered across the Minch.

Gordon, Ranald and I were almost speechless as we soaked up the grandeur of the surroundings. Handa is known for its geology and wildlife. Both were on show that day. Thousands of birds swooped and spiralled on the thermals from the cliffs and to our right seals sunbathed on sandstone slabs just proud of sea level. The place was alive with wildlife in a surrounding of pure unspoilt natural grandeur.

Anchor in Traigh an Tempull Bay

We motor sailed along the shoreline passing Traigh Scourie Bay and Port an Eilein rounding the headland into the Sound of Handa. Our aim was to anchor in Traigh an Tempull Bay. The bay is noted in pilot books as the only safe anchorage on the island.  The reader is reminded to maintain a vigilance due to the tides and over falls that run within the Sound. To our disappointment two other yachts were anchored in the bay leaving us with limited choices in what is a shallow bay. We dropped our anchor and settled in the calm water. Only 30 meters or so behind us it was clear to see the tidal movement of the water rushing northwards on the incoming tide. After waiting a short to make sure we were secure on the anchor the three of us set off for shore in the rubber dinghy.

Handa is visited by over 5,000 people a year

Handa is visited by over 5,000 people a year. We landed on the wonderful sandy beach sharing it with thirty-or-so others who were waiting for the ferry back to the mainland. We did not hang around for long and we set off through the dunes to explore the rest of the island in peace. My plan was to run around the island.  Leaving the others is et off along the south shore to do a clockwise circumnavigation of Handa. I passed the wardens bothy and followed what was a very well-maintained path out towards the tops of the cliffs. Cliffs we had seen from below on the deck of Trade Winds.

On the way I encountered several groups coming back in from their walk and making for the last ferry of the day. A ranger approached me asking if I was on the ferry. She was the sweeper making sure no-one would be left stranded on the island. Assuring her I was on a yacht she set off looking to herd up any errant visitors. I did have smile to myself as to her sincere enquiry. Everyone else I had encountered that day had binoculars, small back packs and looked every part the ‘twitcher’ in their perfect environment. As for me, I was in running shoes, shorts and sporting a bum bag. Not your archetypical twitcher.

The path gave way to a ribbon of board walk that stretched and snaked its way across the grassland and on out of sight. I had never run on such a sound and long board walk!

A stone arch we had christened from the yacht ‘rock-window was worth a detour. The arched square gap in the cliff face was as impressive from inland as it had been from the seaward side.

Handa in all its natural glory

The following 30 minutes of running were quite inspiring passing precipitous cliffs that teemed with birdlife. In places creeping flat on my belly inching as close as I dared to the sheer drop. The island of Handa presents a mass of bare stone to the prevailing westerly weather. Blocks of sandstone had succumbed to the incessant weathering and lay proud of their surroundings. Others lay awash in the surf. Perhaps fallen from the cliff face or the remnants of a great sea stack of the past. Handa, in places stood sound and un-bowing to the prevailing weather.  100m of sheer cliff was testament to the solidity of this place.  In others a shambles of surrendered sandstone cubes and slabs lay tumbled down into the water.

The Scottish island of Handa is home to the UK’s largest population of guillemot, enormous numbers of razorbill and kittiwake with a supporting cast of four other gull species, , shag, puffin, black guillemot and Arctic and great skua.

The famous sea-stack; Stacc An T’Seabhaig stood tall, whitened by guano of the Razorbills that occupied every ledge and nook. I sat on the dry grassy top watching the Puffins and Razorbills swoop and soar.

Time to head back

It was a perfect spot to stretch out, watch the birds and drift off into a peaceful slumber. However I had committed to an agreed ‘return time’ and did not want to cause any concern by being late. The grass path was lined with builders’ bags, soon, no doubt to be hard graft laboured into a grit path.

The return leg across the middle of the island was a delight. Slightly downhill most of the way and on parts a boardwalk. All under a bright late afternoon sun in surroundings that could only inspire. Over to the left was one of Hand’s six freshwater lochans, each devoid of any fish.

My only disappointment was that my earlier encounter with the Rangers had them advise they would prefer me not to head up to the summit of the island.  The reason being there was no designated path to the top. I did have a momentary defiant thought but then concluded that would it not be the end of the world not to summit Handa. The little Scottish island had after all provided such a spectacular day from sea-level, path, board walk running, arresting cliffs and a quite inspiring array of birdlife. I was happy. I made my way back to join the others on the beach that was now deserted with only he three of us along the with footprints of the multitudes that came before us.

We paddled back out to Trade Winds and made our way on a following wind to Loch Laxford for the evening.

I cannot praise highly enough the condition of Handa and the level of meticulous and passionate care that is self-evident on the island.  More information about the island, the Scottish Wildlife Trust and their work is available on the website here.

We anchored in Traigh an Teampuill bay on the east shore of Handa. The bay is sheltered from moderate westerly winds but is a tight space for more than one yacht. There are submerged rocks in the top end of the bay that extends SE of the drying reef. There is another ‘brick’ noticeable just off the bottom corner of the beach. Choose to anchor well off the sandy beach and the pilot books and Haswell Smith warn of the tidal current  that ‘rip’ north and south in the sound. The flow was quite evident only 20m or so from our stern. Our anchor held on a sandy bottom in 8m with plenty of chain and warp deployed. The passing ferry boat plying visitors to the island is a regular event and does kick up a bit of wash so watch your coffee does not spill. 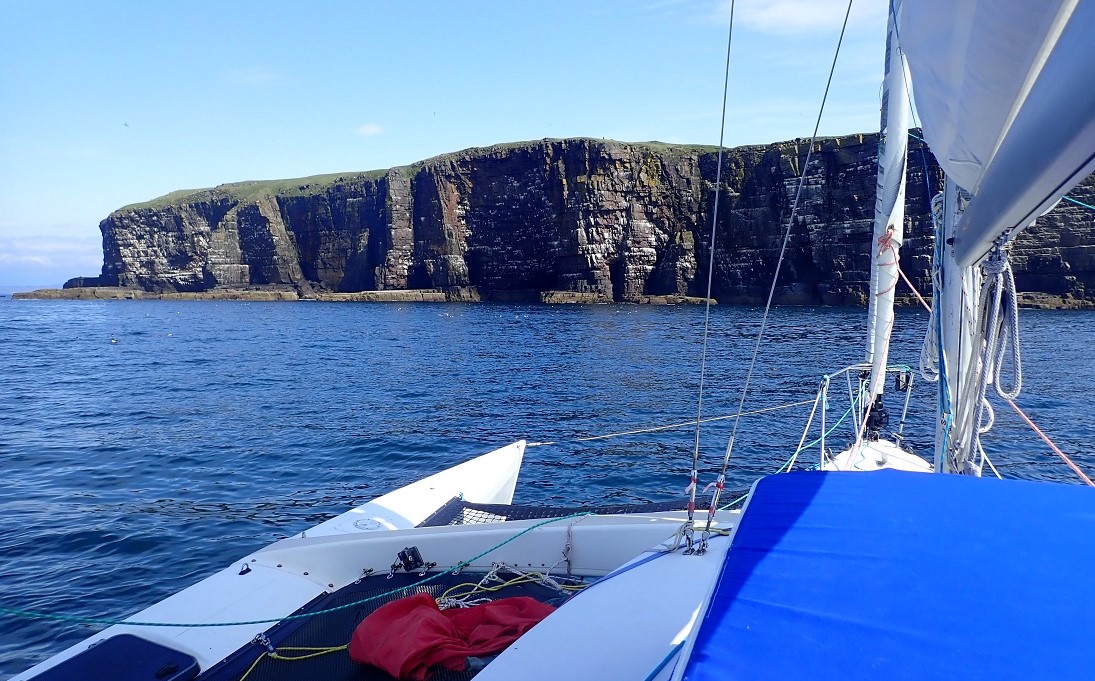 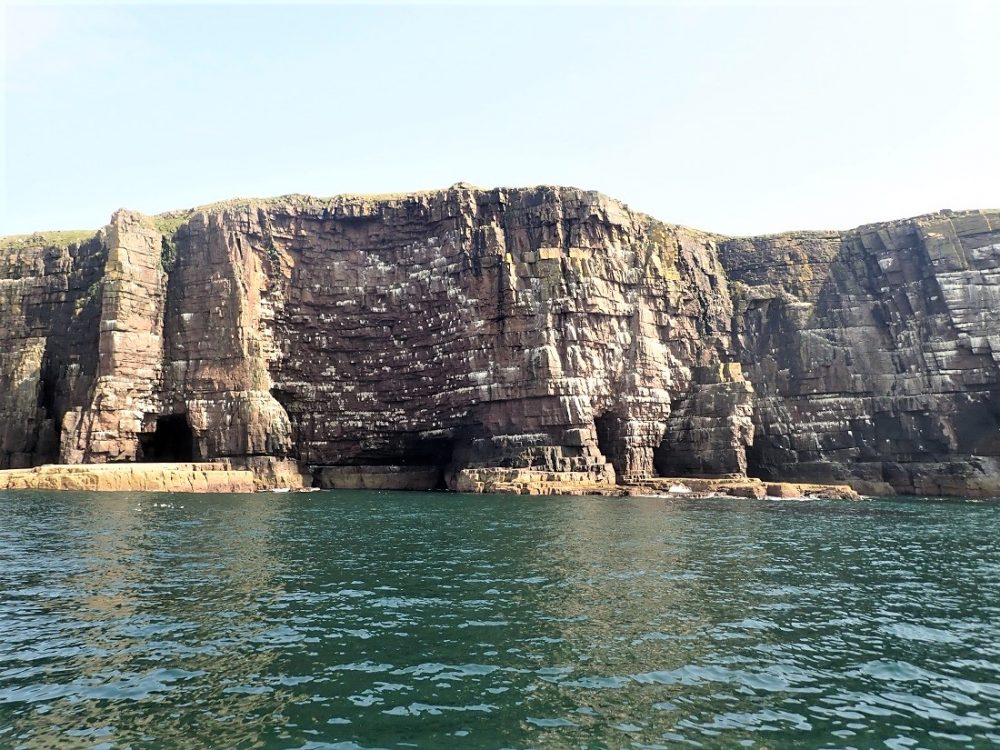 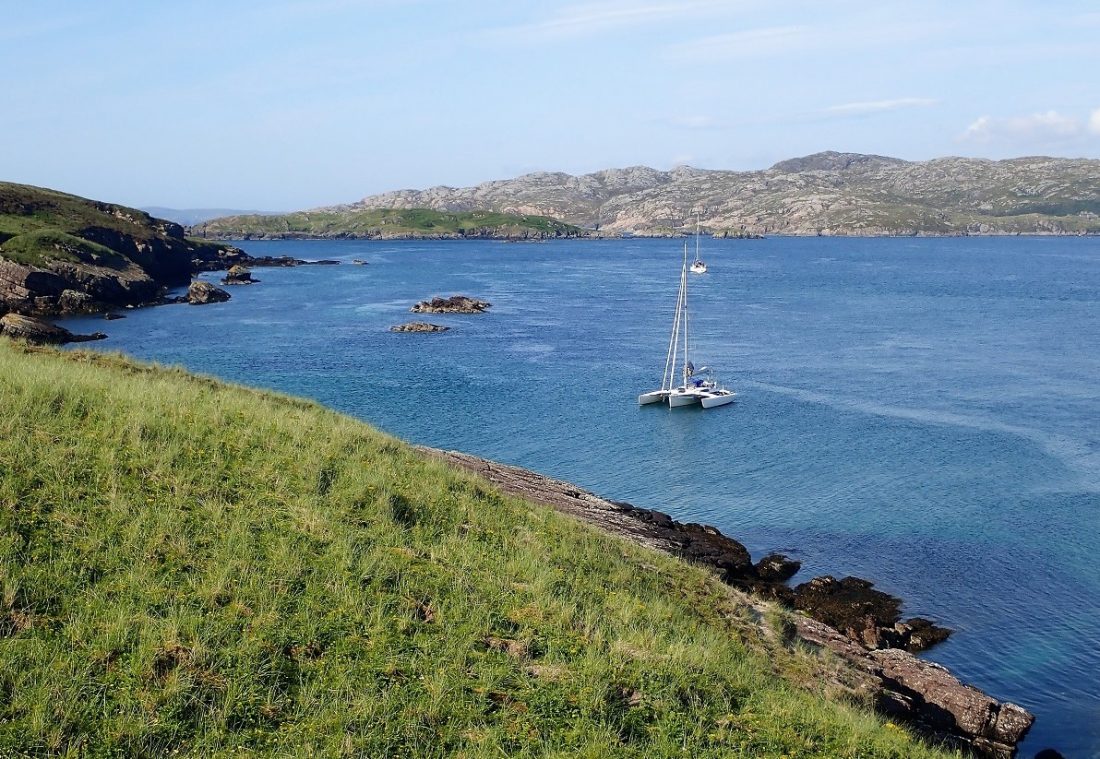 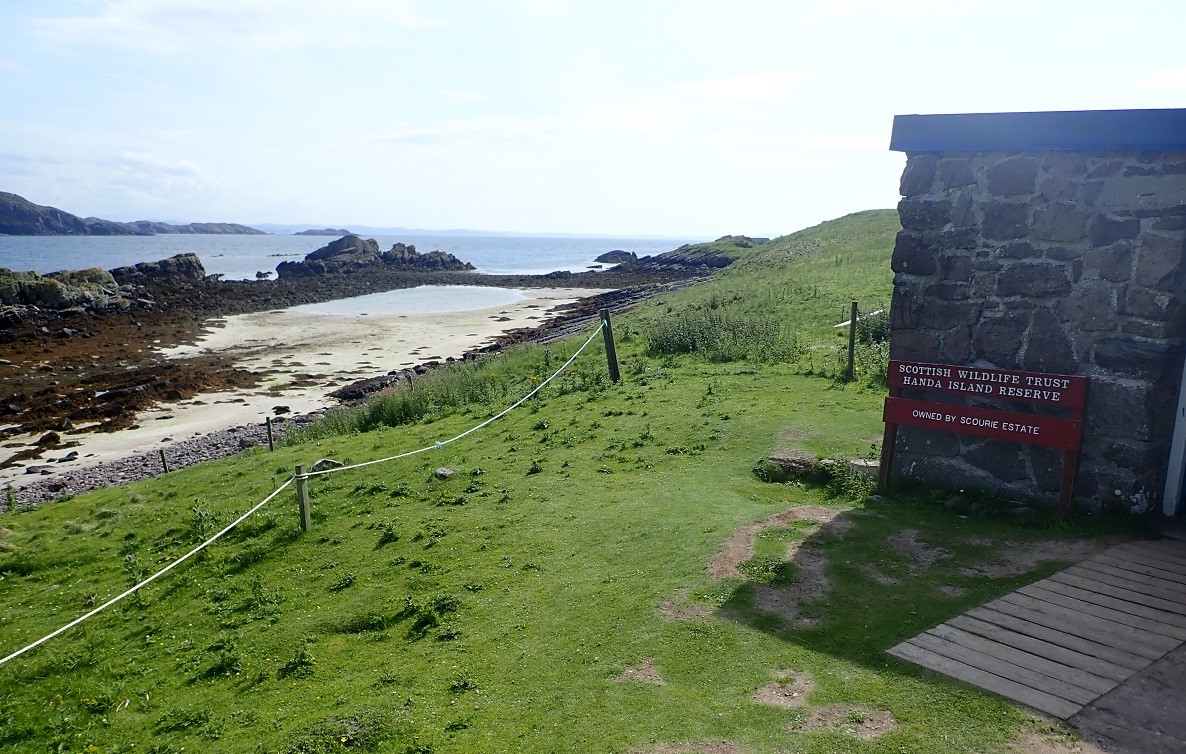 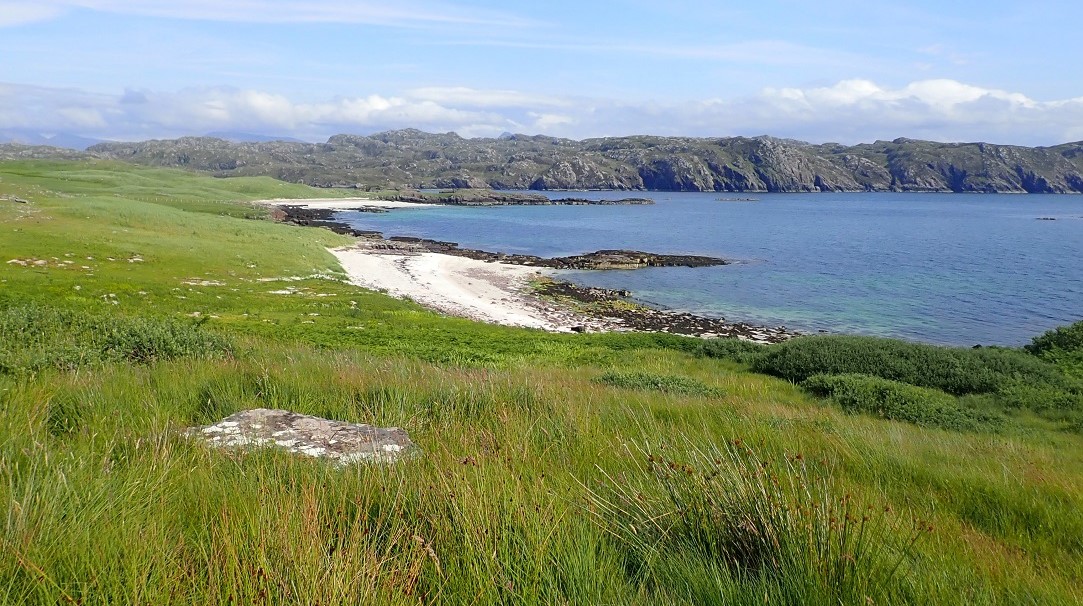 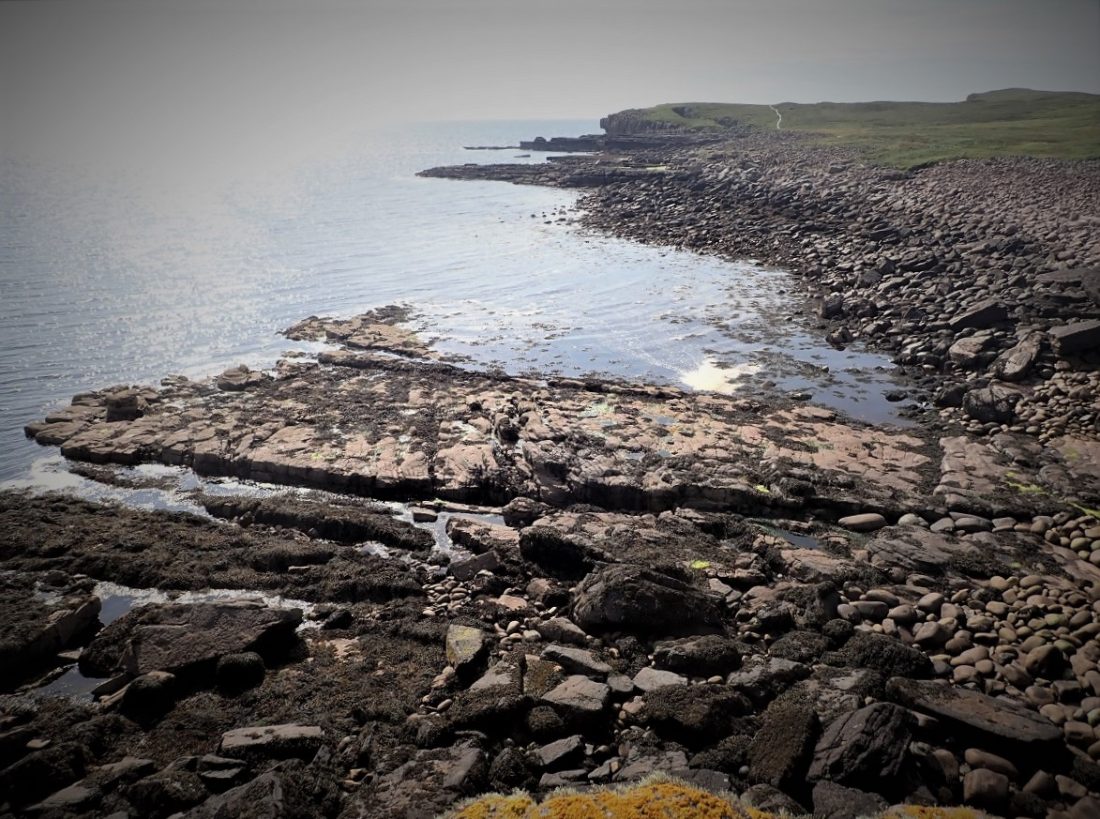 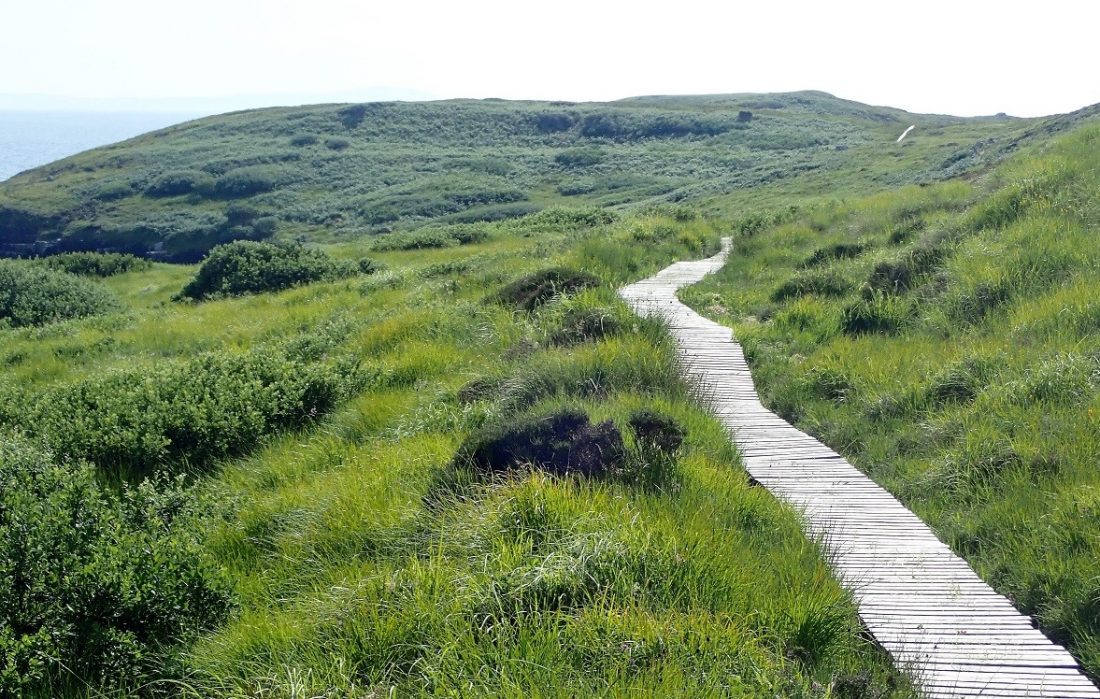 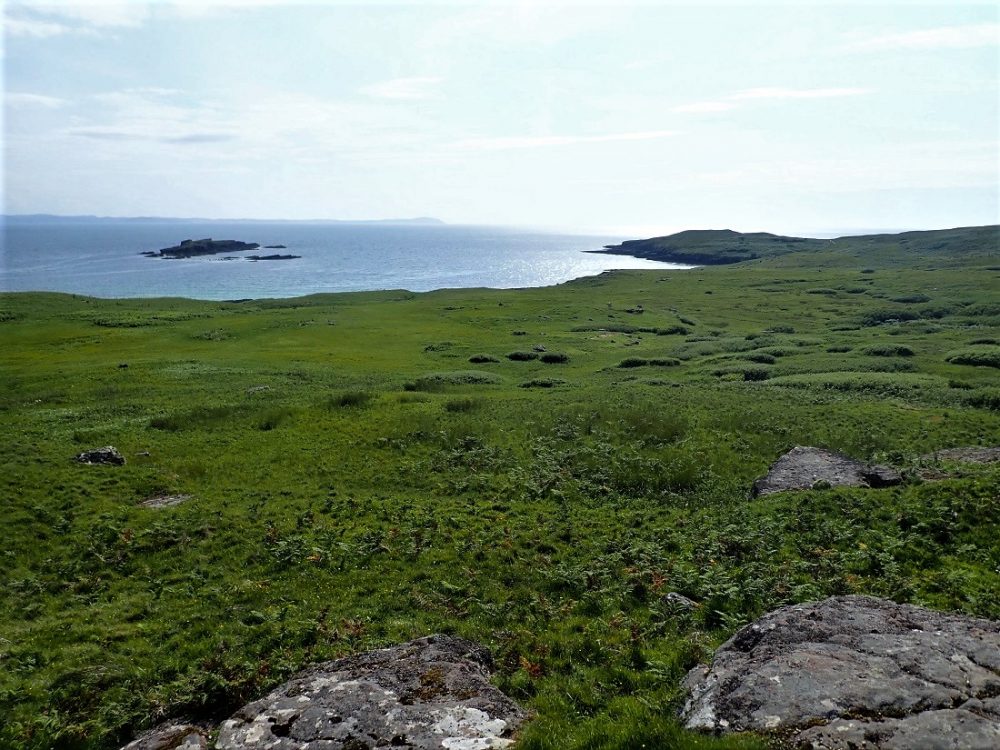 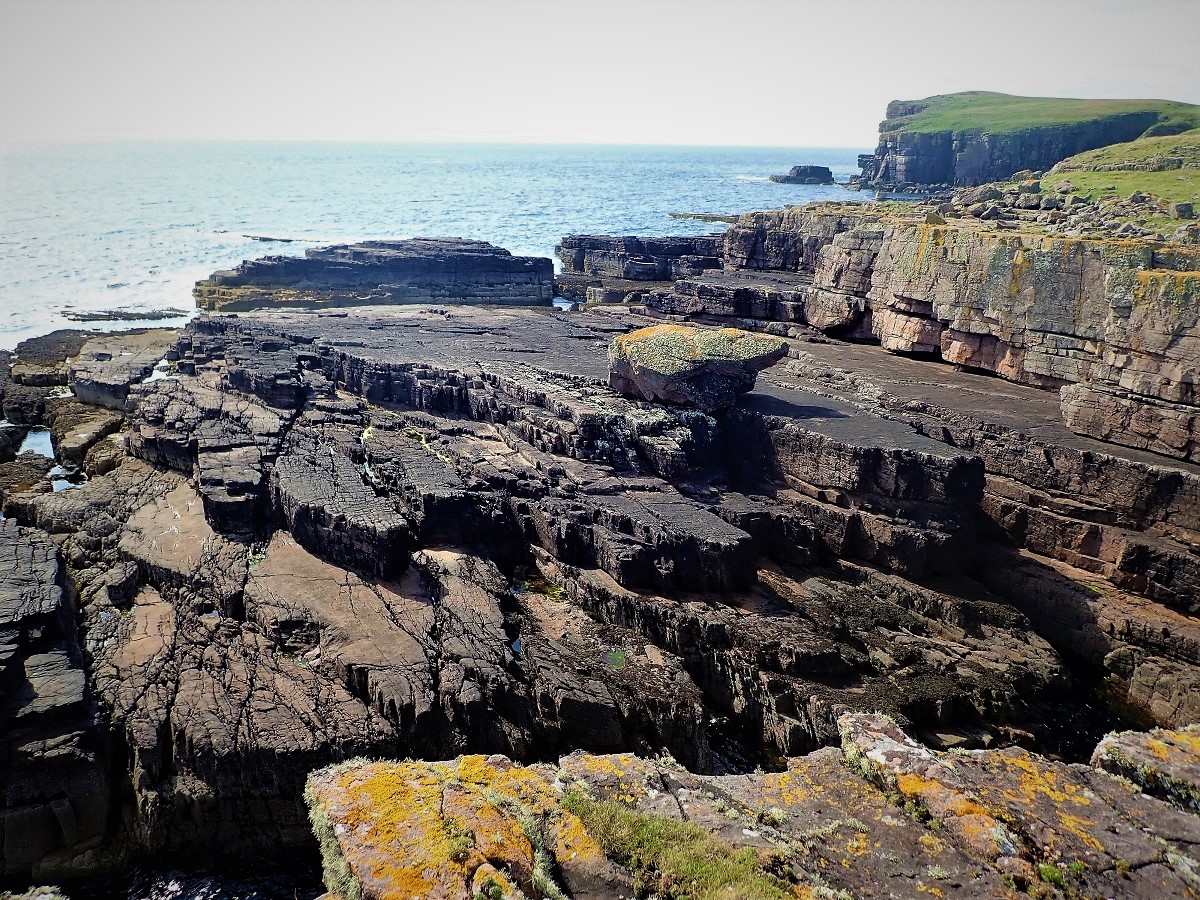 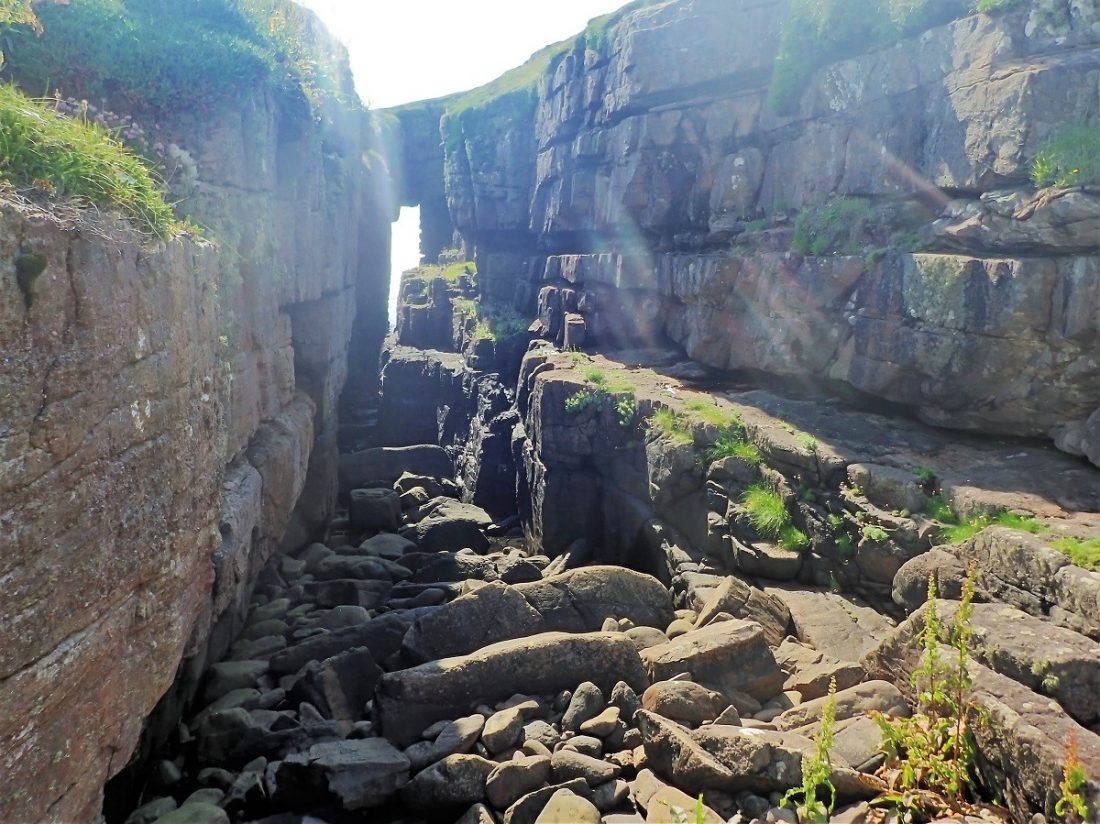 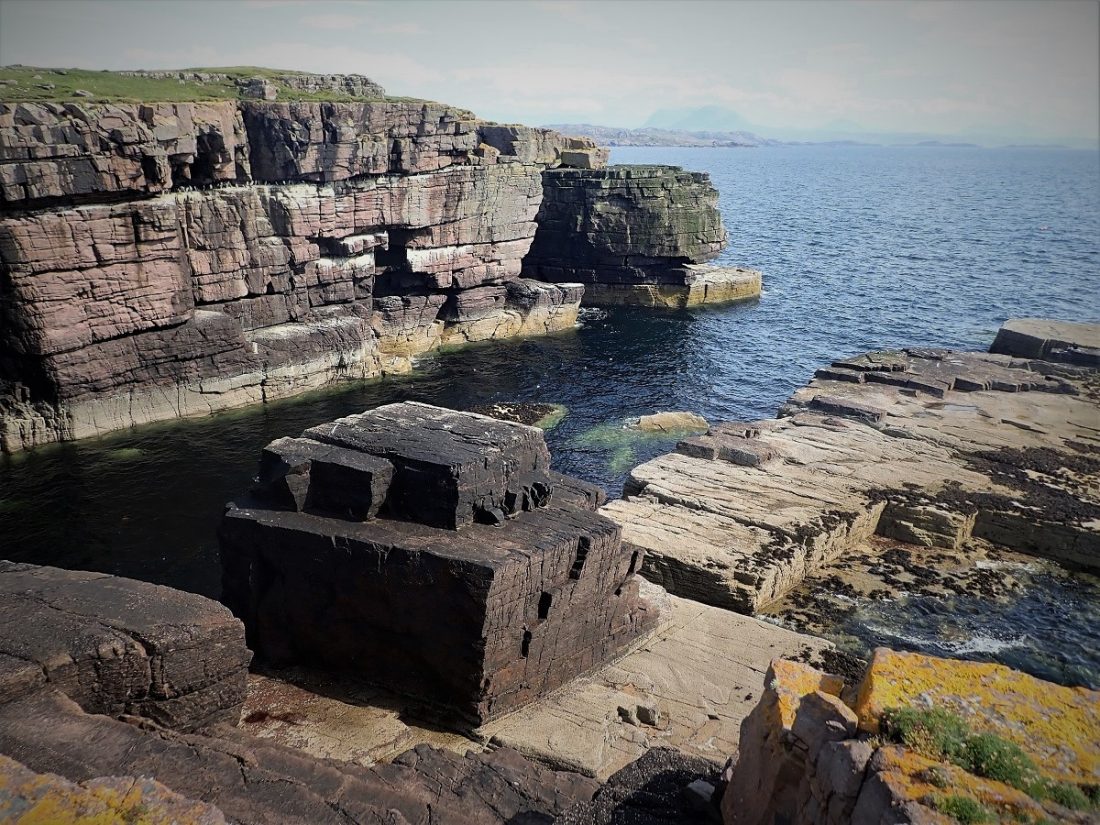 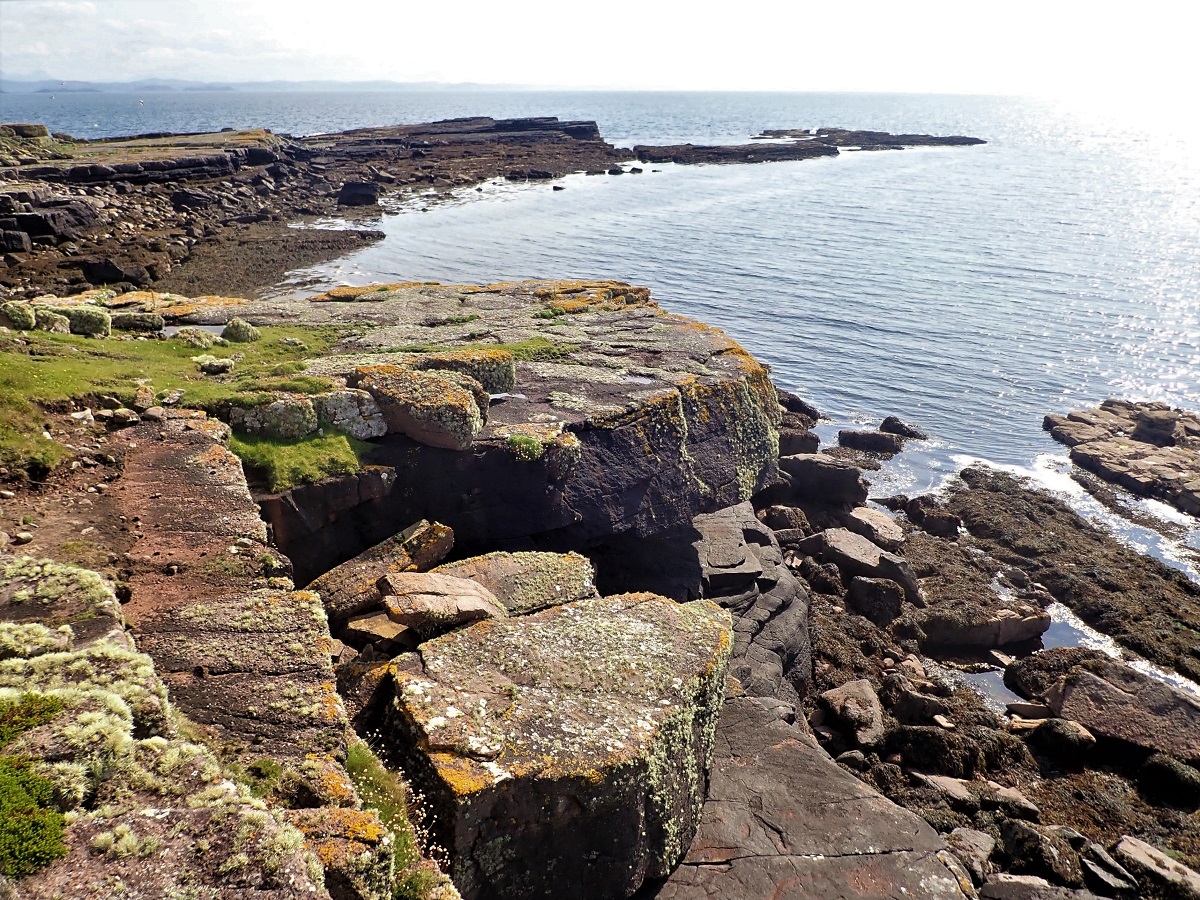 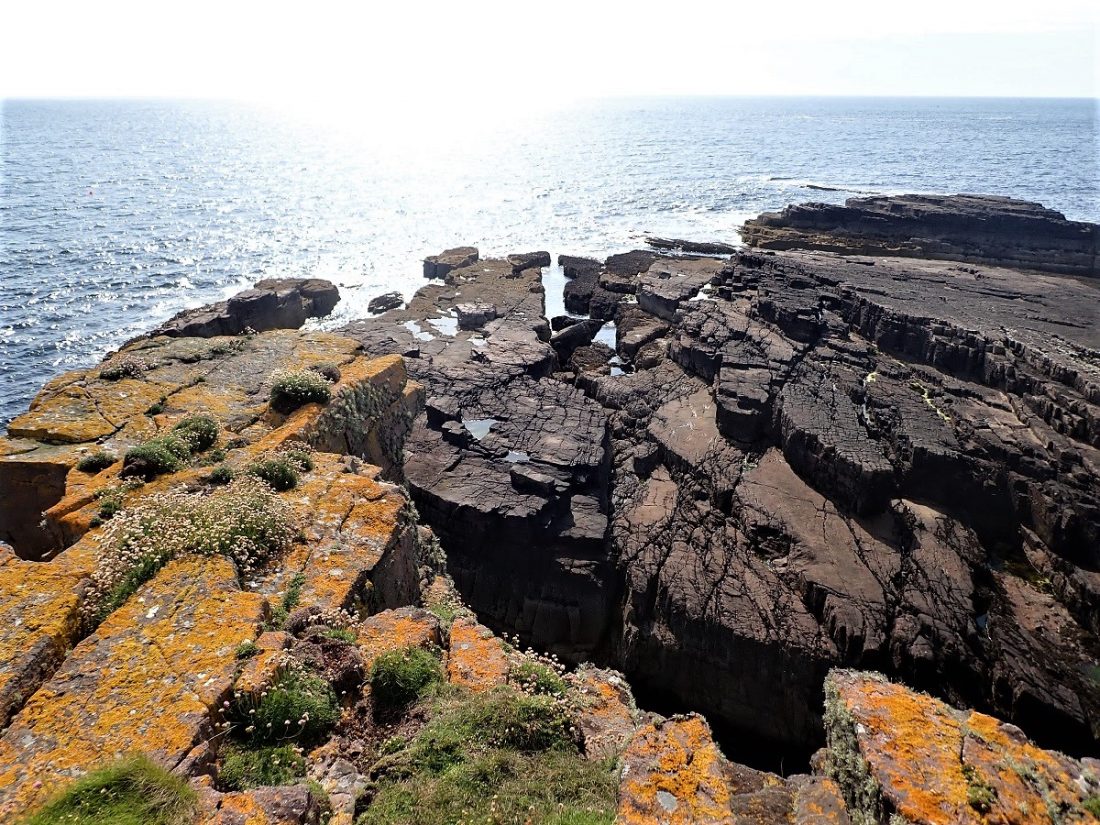 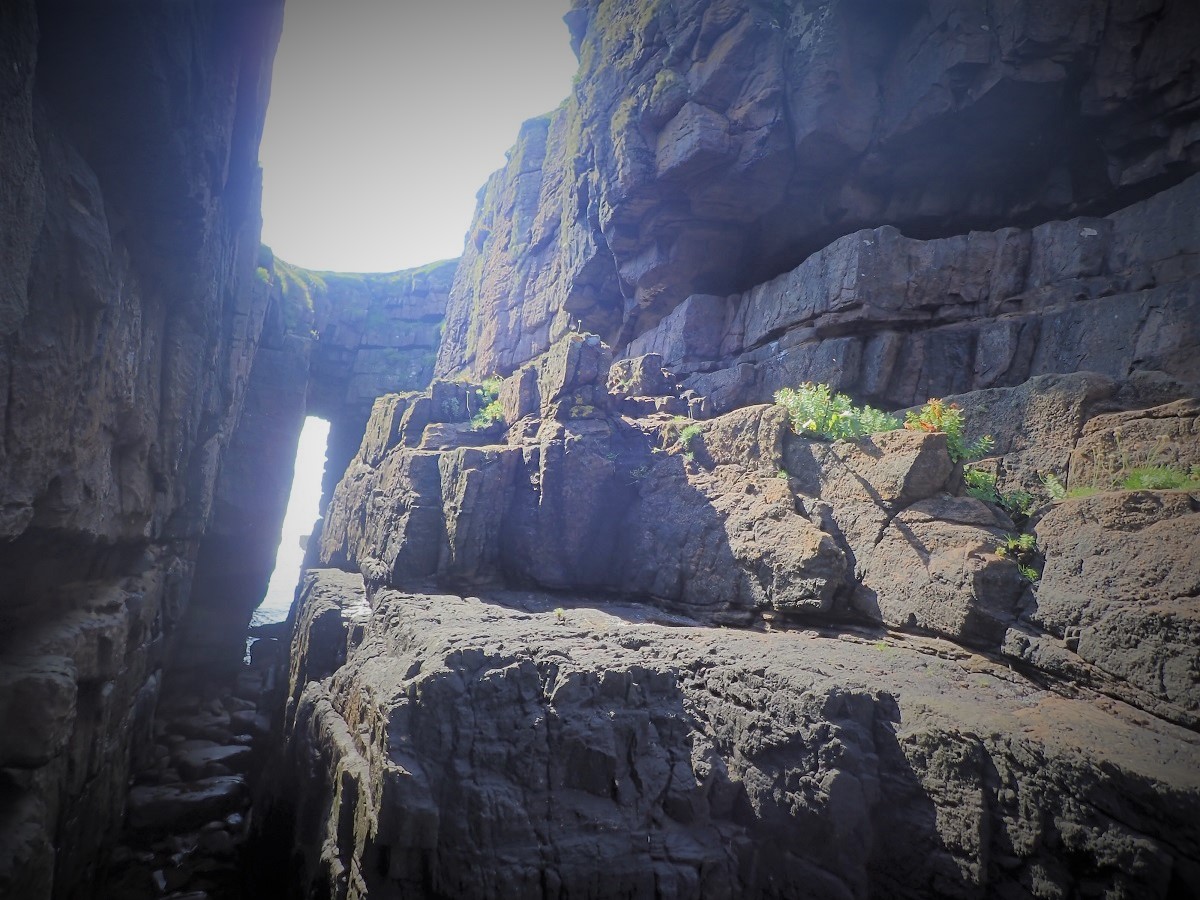 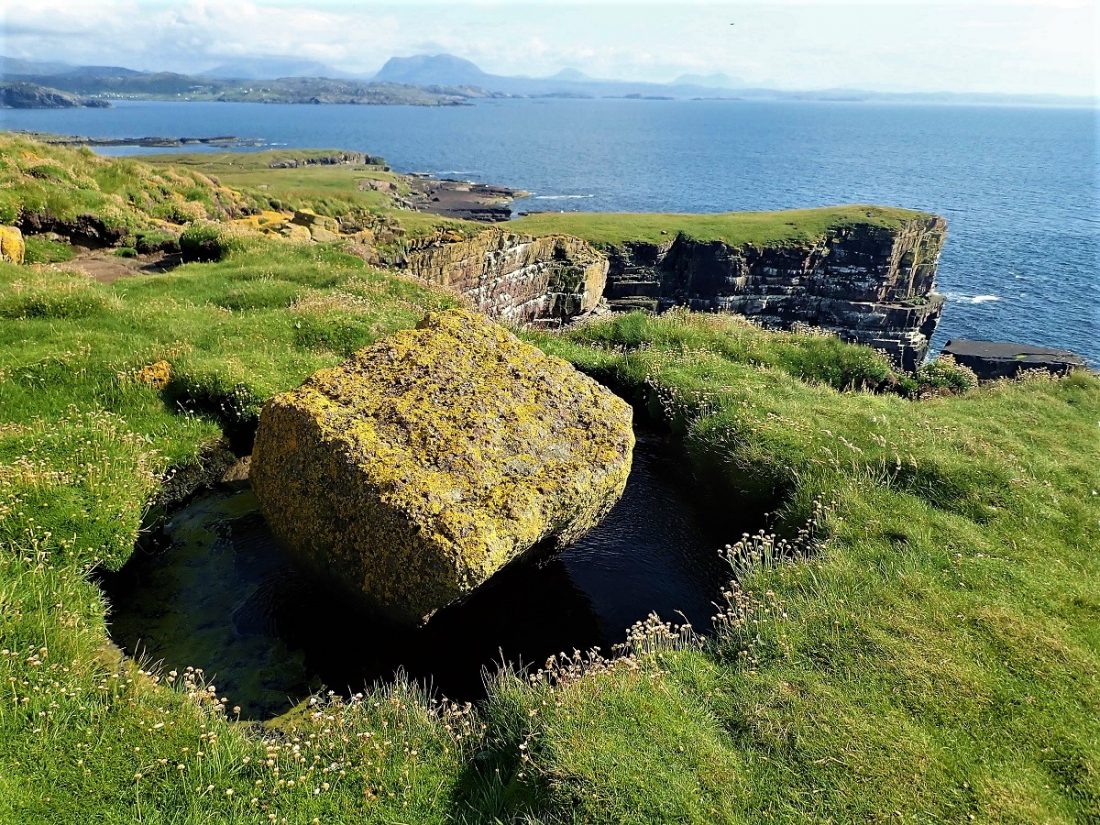 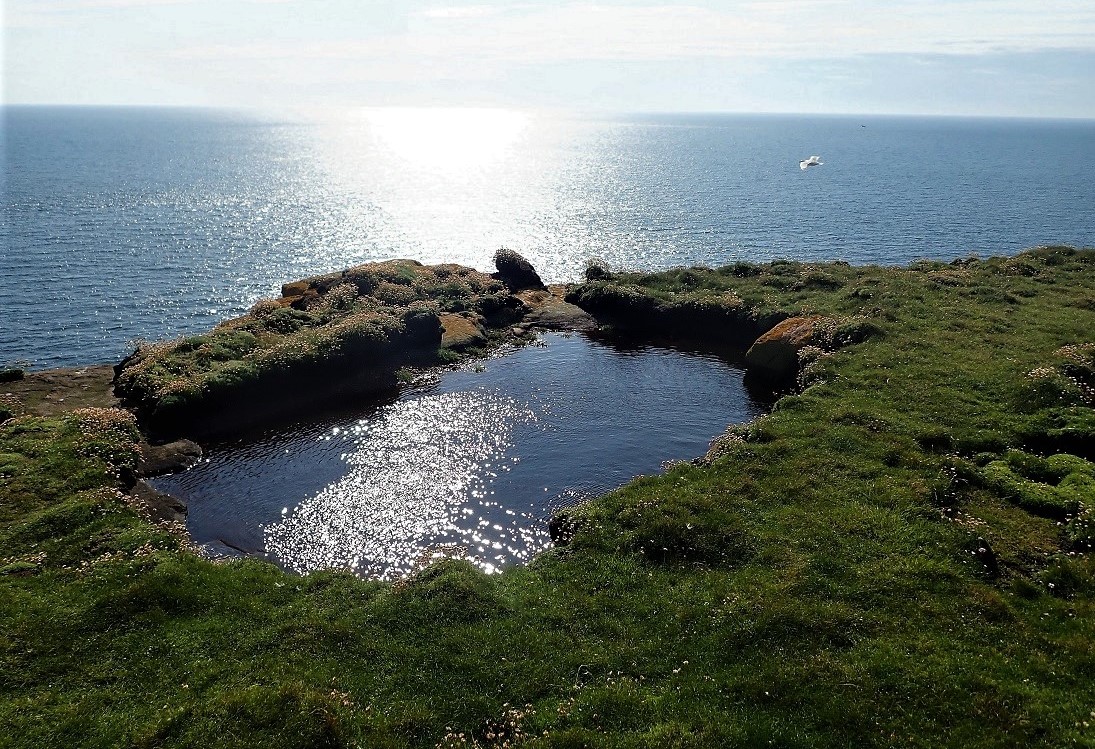 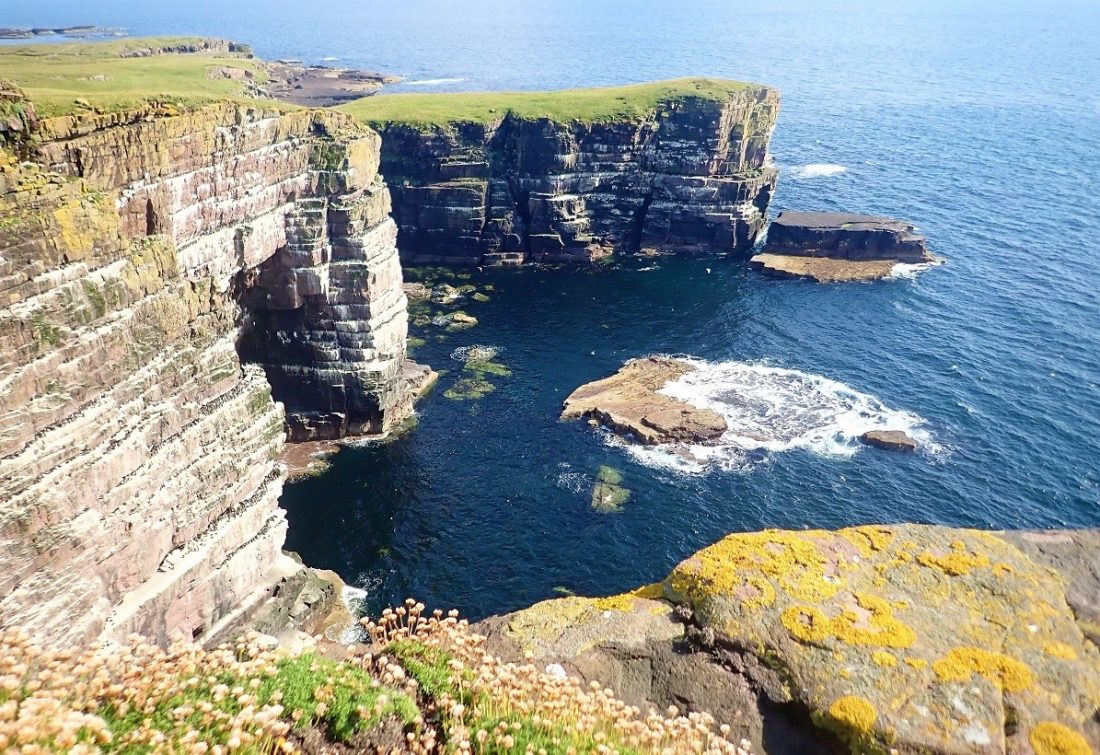 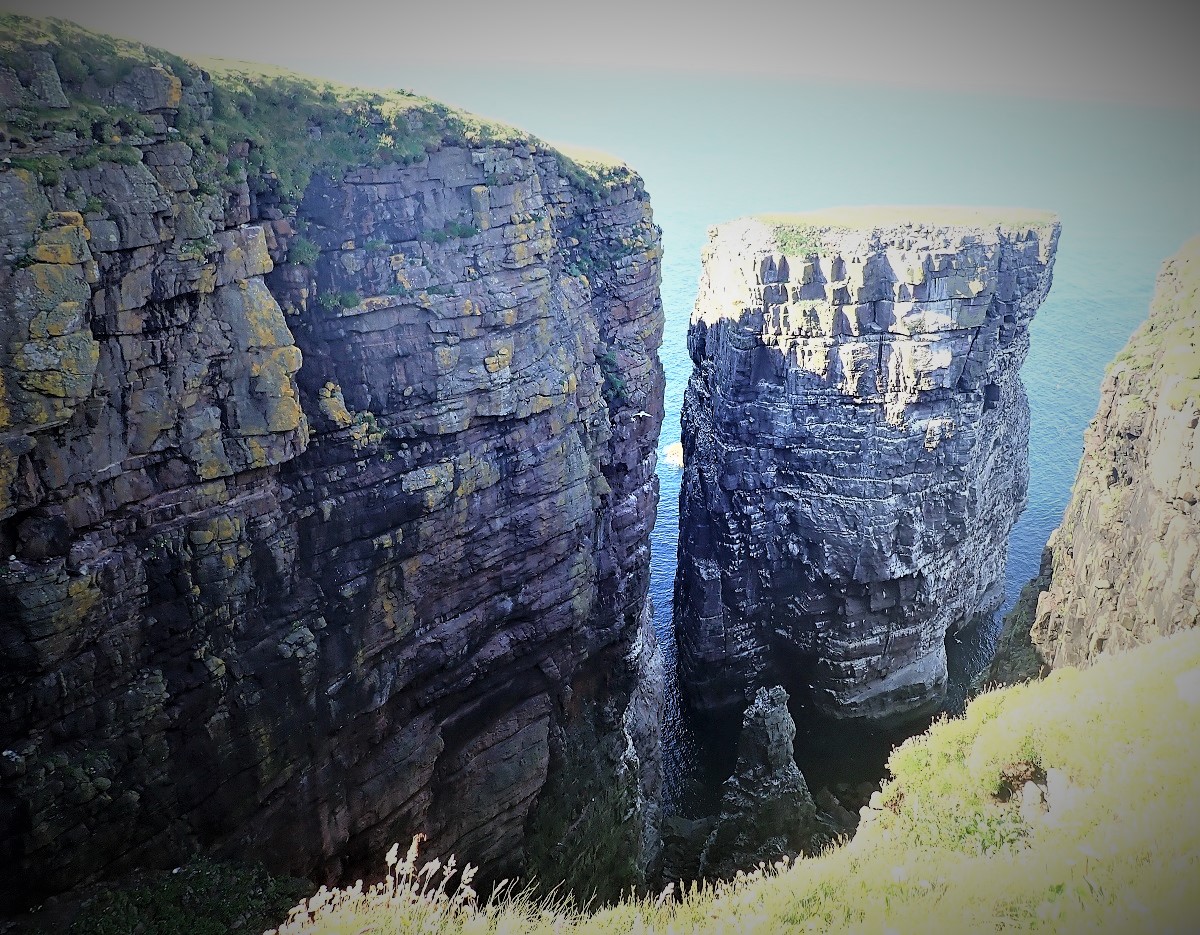 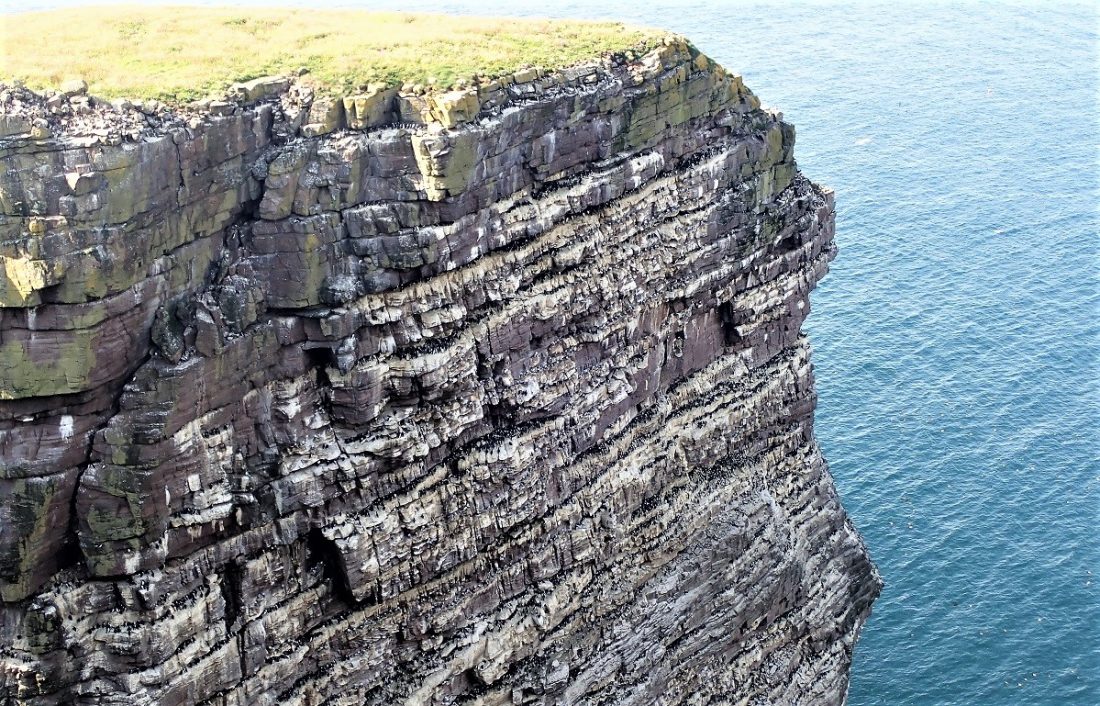 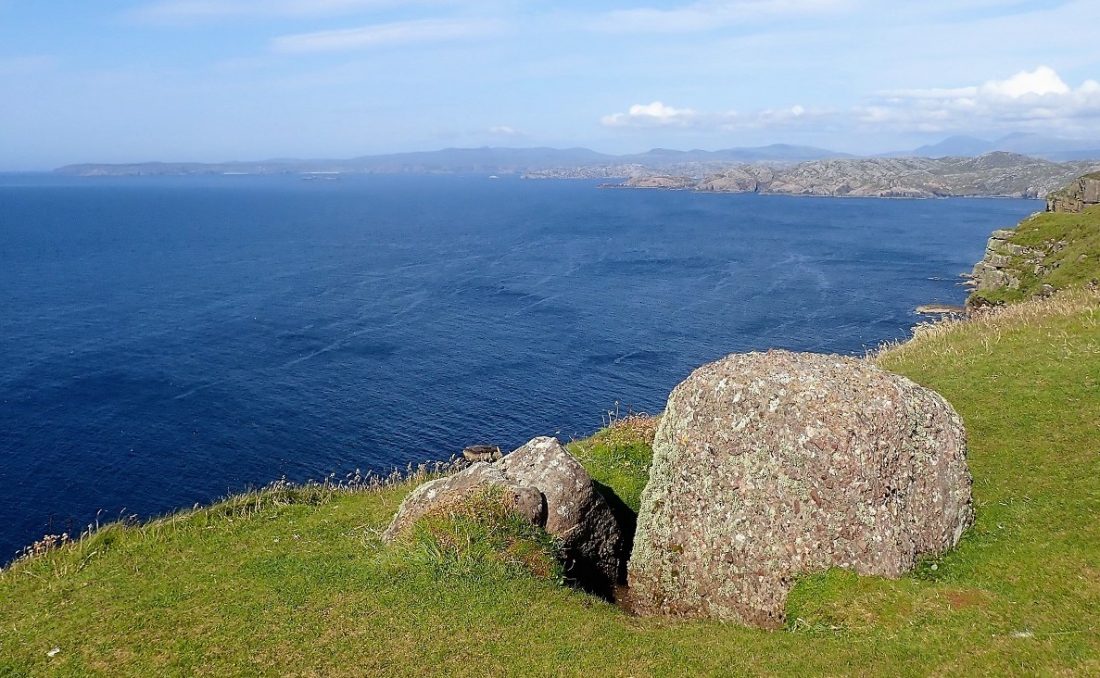