At the southern tip of the island chain of the Outer Hebrides sits the Isle of Mingulay – abandoned by its last inhabitants in 1912, it is now owned and cared for by the National Trust for Scotland.

At the edge of Europe

An island at the edge of Europe, that’s the way I see Mingulay. I have landed on the island three times and each time has been a wonderful experience.

The island was evacuated on 1912 and in a way mirrors the St Kilda tale of dwindling population. Life on Mingulay was subject many hardships.   Prolonged periods of bad weather and inability to leave increased the dangers of illness and inability to get off. The population reached a peak of 150 in 1881 but fell away rapidly until the last resident left in 1912.

Mingulay is now owned by the National Trust for Scotland having acquired it in 2000. Perhaps a far cry from the days of McNeil ownership. In the interests of their tenants arrangements for new husbands and wives for widows or widowers were common. Somehow I don’t see the NTS bringing that into play in any of their properties or estates. Perhaps stranger things have happened…..

On one of our landings we took to the hills for a run and chose not the highest top, but McPhee’s Hill at 224m some 49m short of Carnan hill. We fancied McPhee’s hill due to the story that brought about its naming. When owned by the McNeils a rent collector by the name of McPhee was dispatched to the island to collect the dues. On landing, he discovered everyone was dead. With great alarm, he hailed the boat crew that had dropped him off to come back and get him. Fearful of the plague the crew rowed off and left McPhee to his fate.

The story goes that the hapless McPhee was left on the island for a year. No ship dared to stop for fear of infection. After the year it was thought that any plague would have passed. McPhee was saved from his confinement. For his troubles McPhee was granted lands on the island. To this day the hill at the north end of the island is McPhee’s Hill.

We landed on the pristine white sands of Mingulay Bay. From there we made our way through the ruin of the village and up the slopping grass rise to the cairn. The day was overcast so there were no great views but that was about the change. With little or nothing to see in the low clouds we headed back down. As we headed down we could see the stone dykes marking the crofts. Ancient lands grafted over by hand to eke out a living. A hard place indeed.

Back on Pegasus we decided to have a swim around the boat lieu of a shower. That done we dried ourselves and settled down to some lunch. The three of us could only stare as a rather buxom young lady wearing not a stitch of clothing wandered down the beach to the water’s edge. After a short swim she stood and towelled herself dry in full view.  Then, without any hurry wandered back up a path and out of sight. We were speechless. It was only later we found out that a bothy can be rented and she must have been the tenant. A tenant who was convening with nature as she saw best. That was back in 2002 and we still have a giggle about it when we recount the tale of the extremely well proportioned Mingulay Maid.

The old houses that made up the main village are now fairly ruinous, with many sinking back into Mother Earth. The old school and various buildings defy the ravages of the winds and winters. They stand as testament to their builders art. It’s a melancholy place. Lives lived and lost in hardship but combined by a community spirit. Standing at the front door to a cottage it’s hard to imagine the people and generations that lived out their lives in such conditions. In the end, nothing remains of their efforts and toil other than rough stones that shape doorways, chimneys, windows and walls. Each slowly but inevitably wearing and dissembling away to nothing.

The beach, a living and changing place and is one to behold of pure white soft sand sloping steeply to soft grass with intrusions of rock. Towards the south end of the bay a remarkable boulder of possibly two or more hundred tons sits wedged in a cleft in the rocks. It is a remarkable sight and one can only wonder as to how that boulder ended up there. Had it rolled down from hills above? Had been dumped there by an enormous wave or a single glaciated erratic left behind from the ice age. More likely than not, a giant placed it there to cause subsequent travellers an ongoing conundrum.

The beach is also home to a very odd red rock. We studied it closely but could not determine if it was painted or naturally red. It is a vivid red so I suspect a creative lodger at the NTS bothy has been quite free with his paint pot and brush. 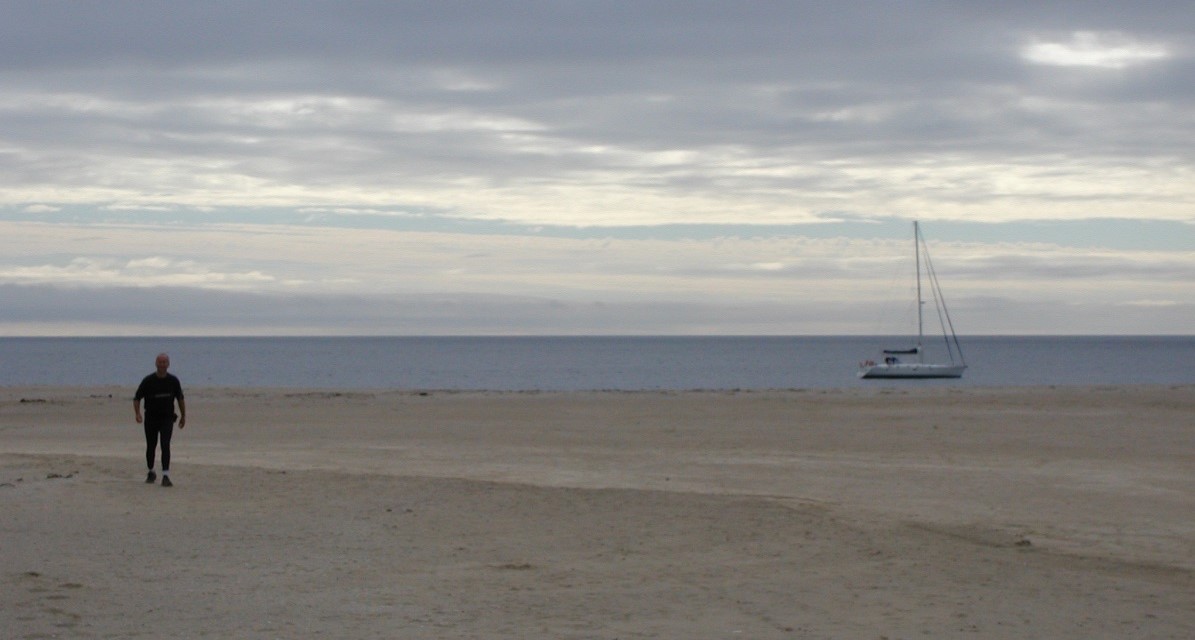 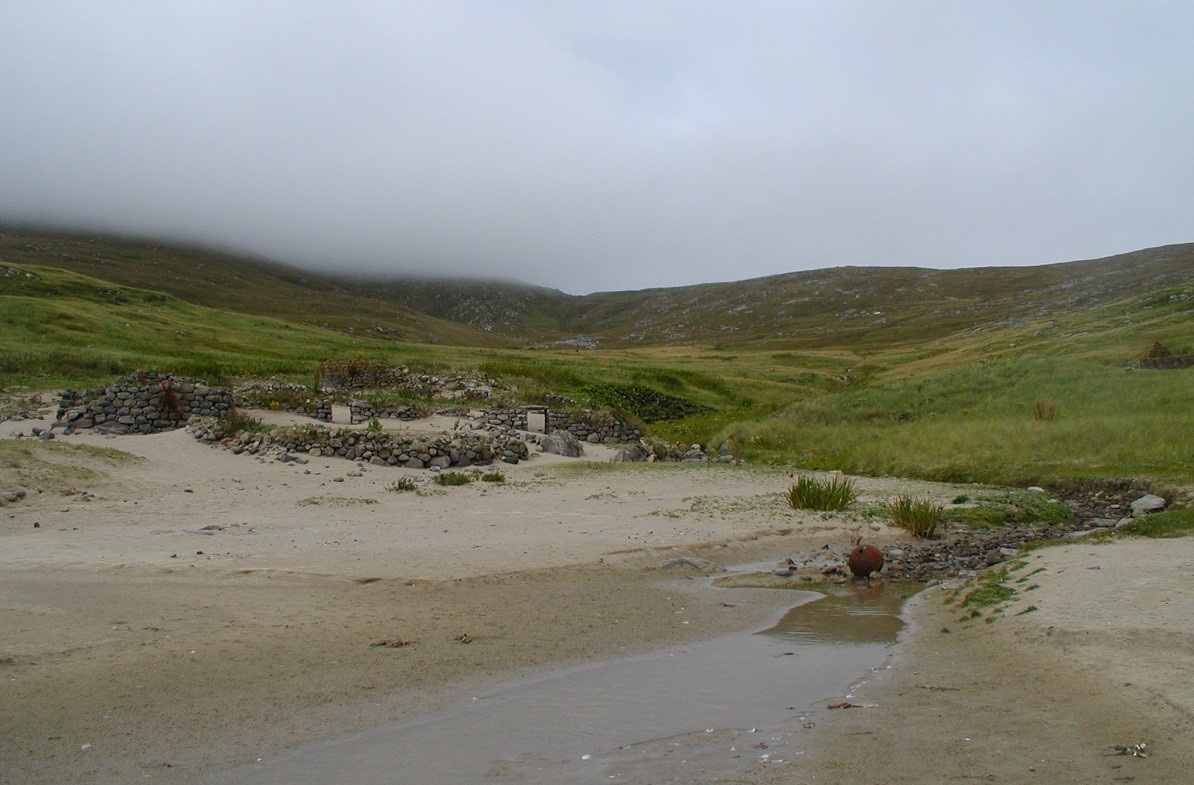 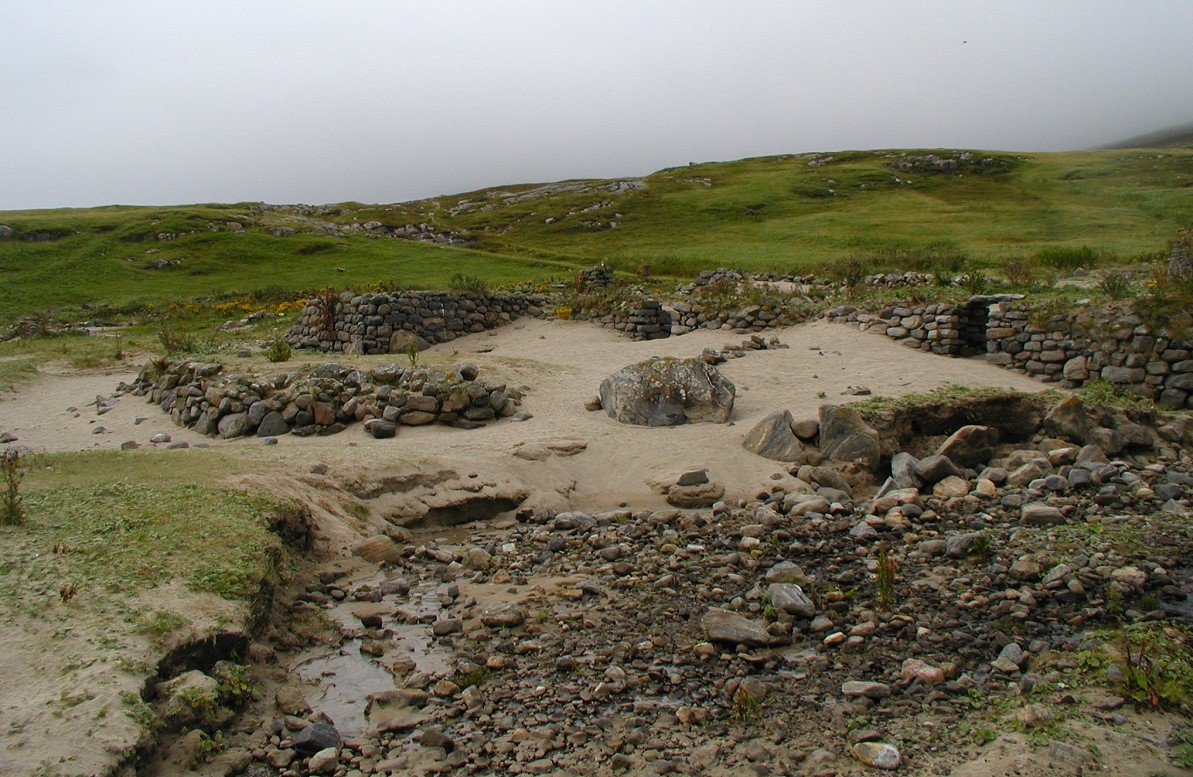 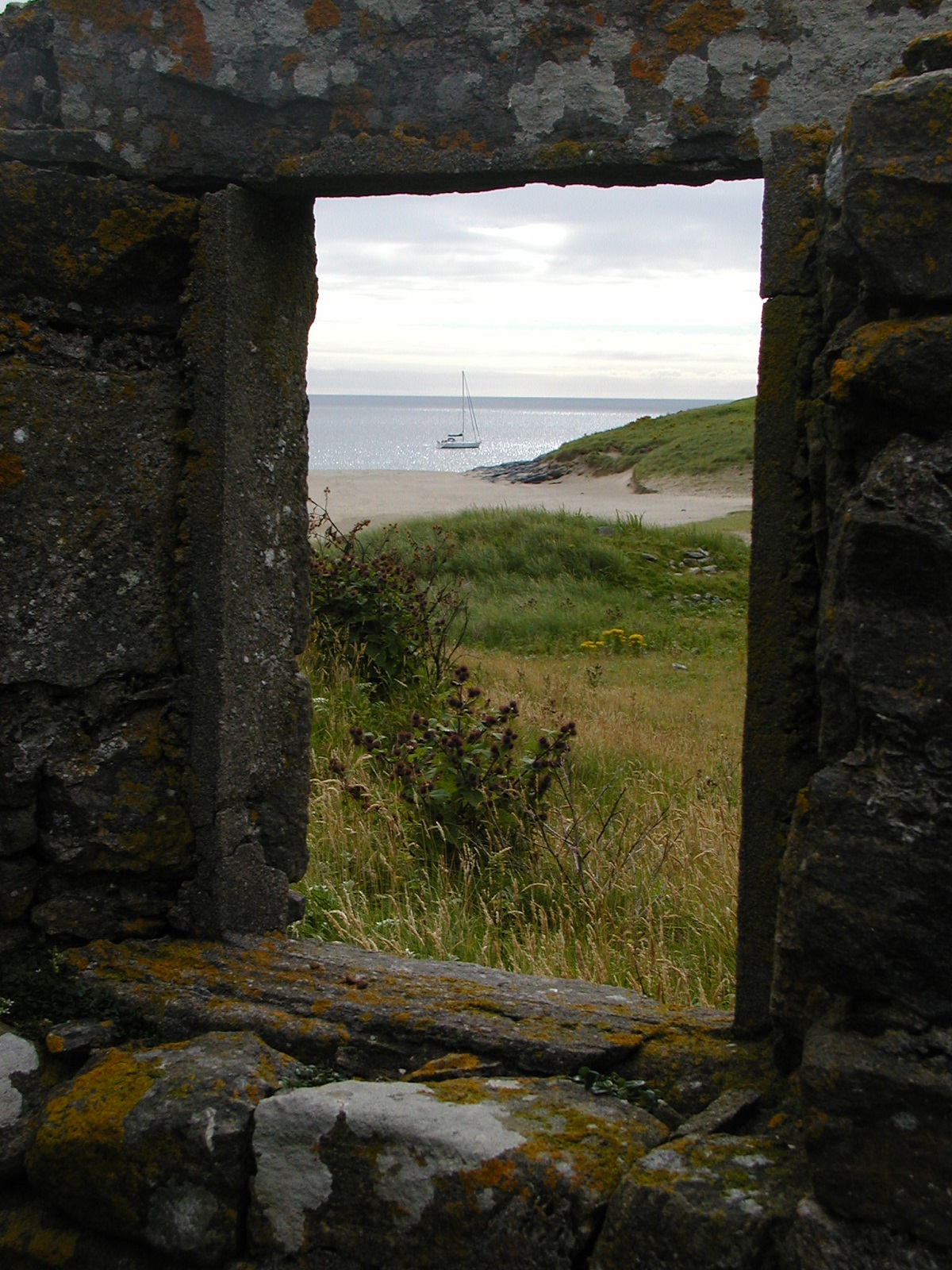 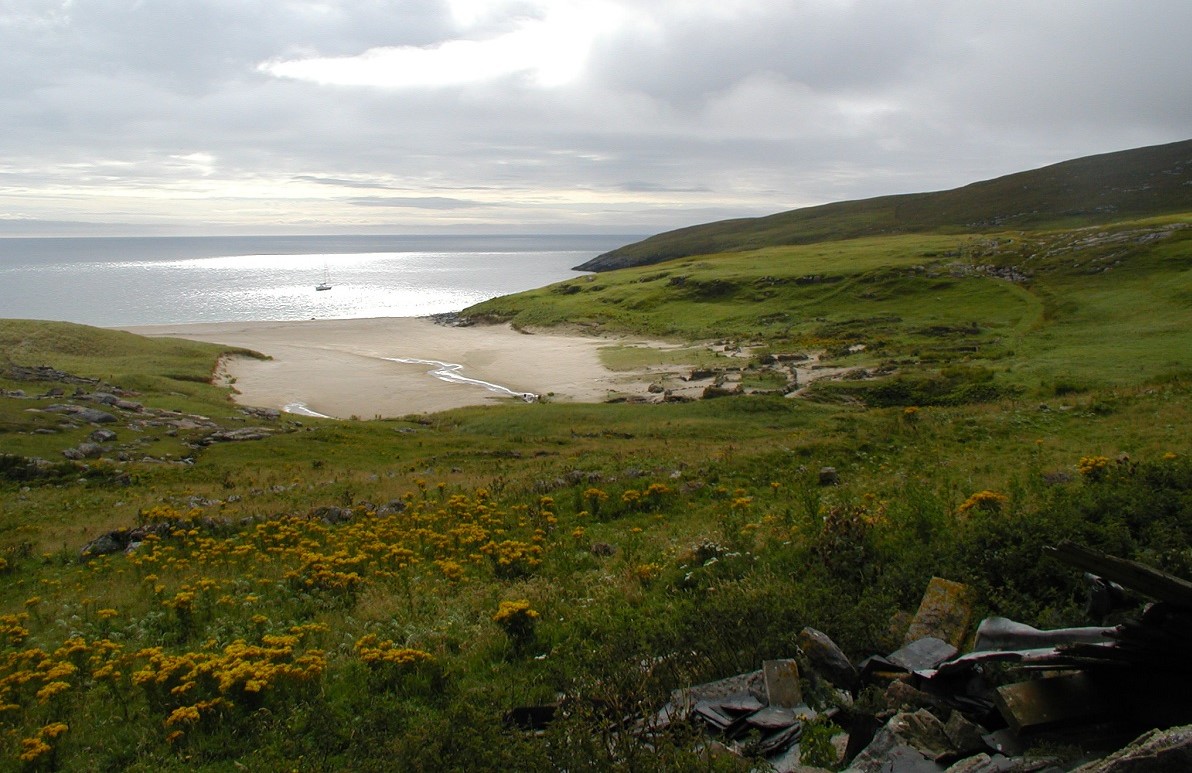 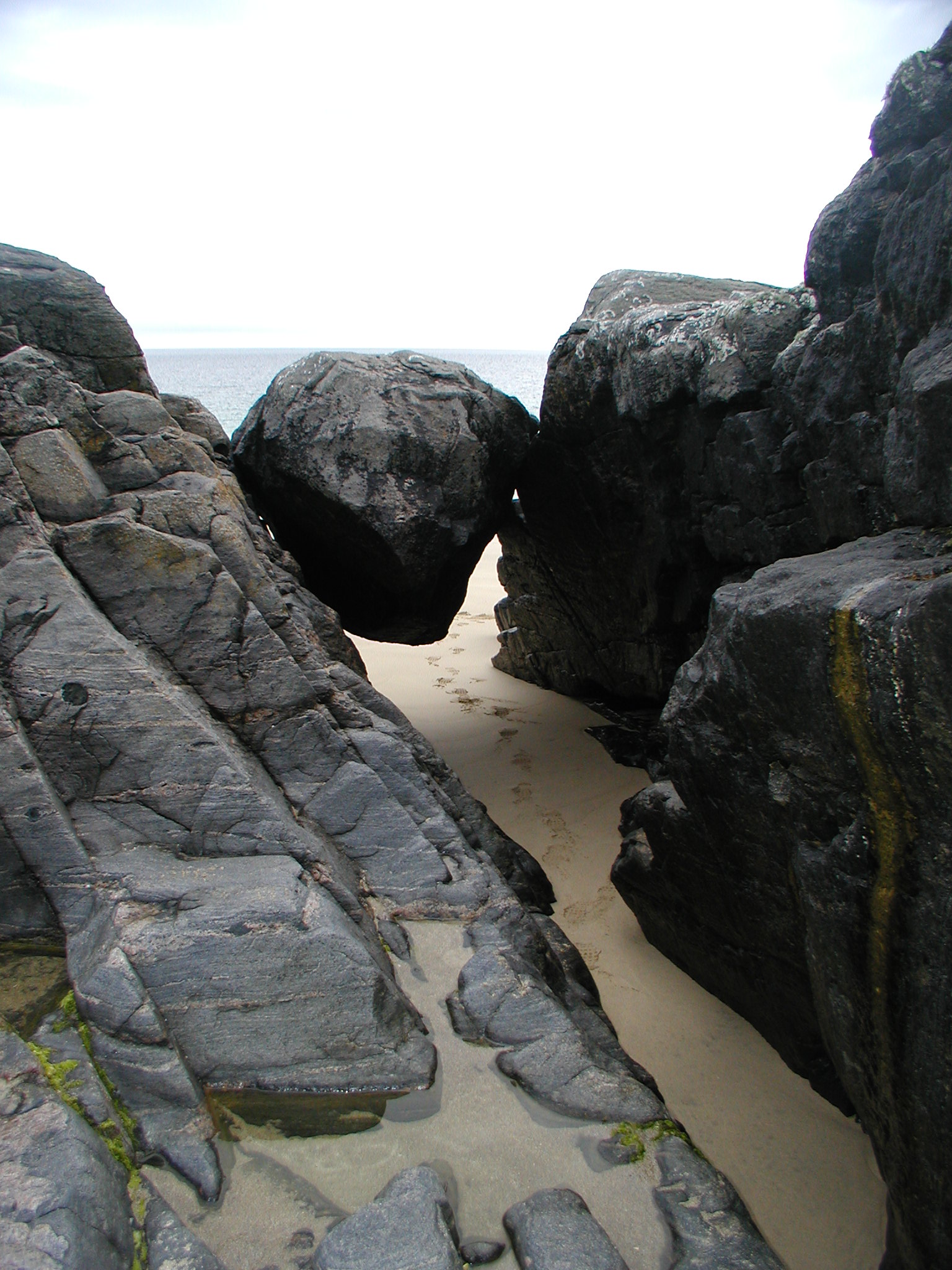 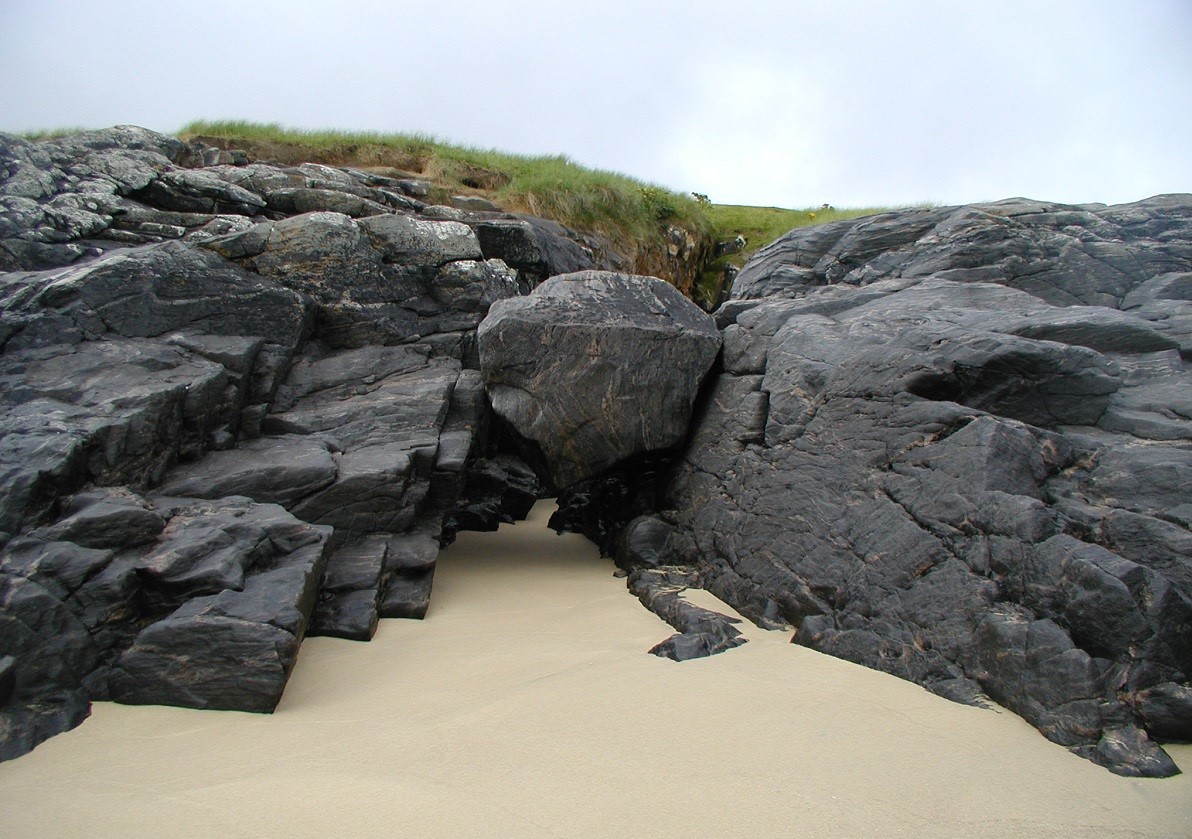 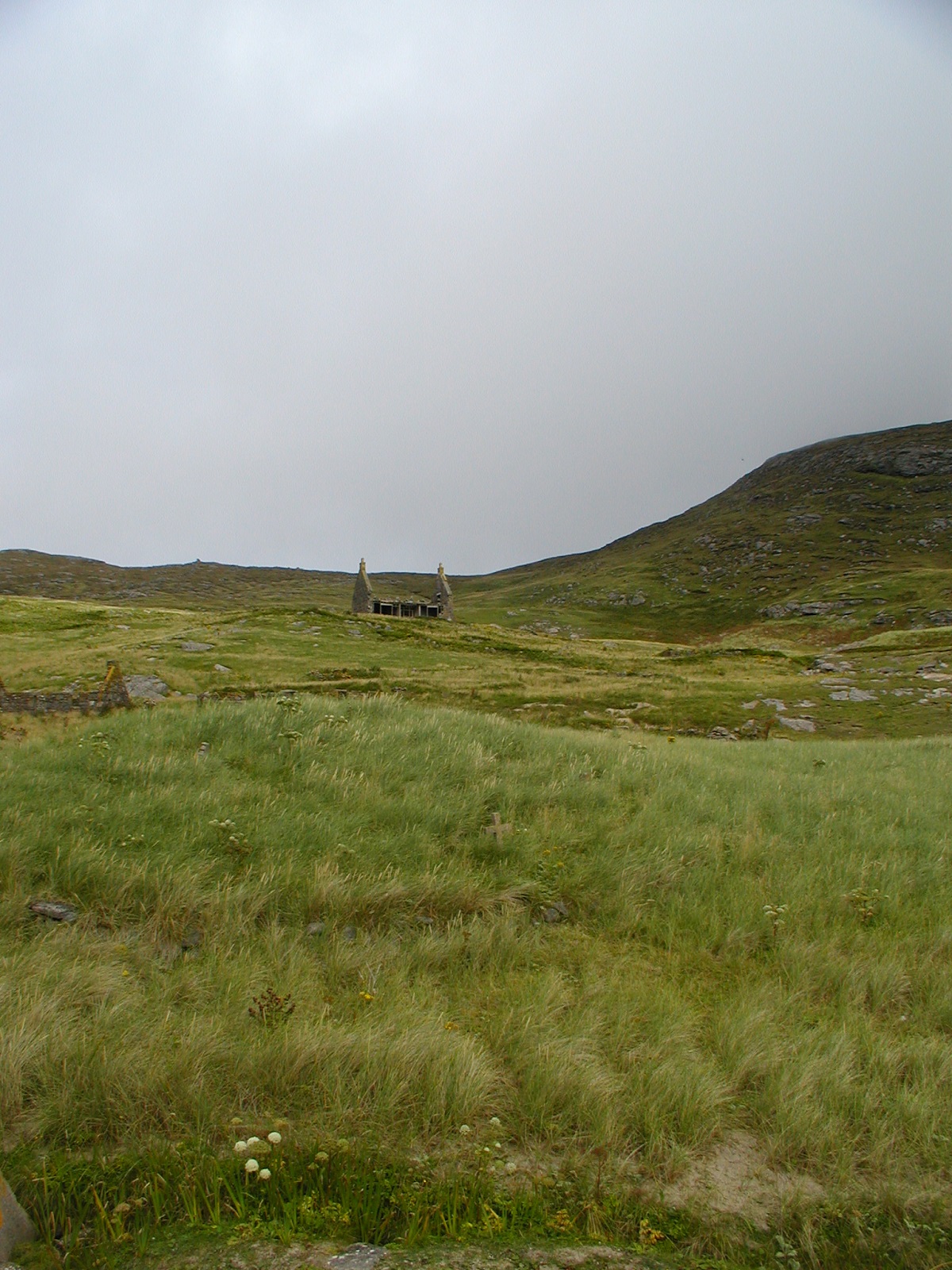 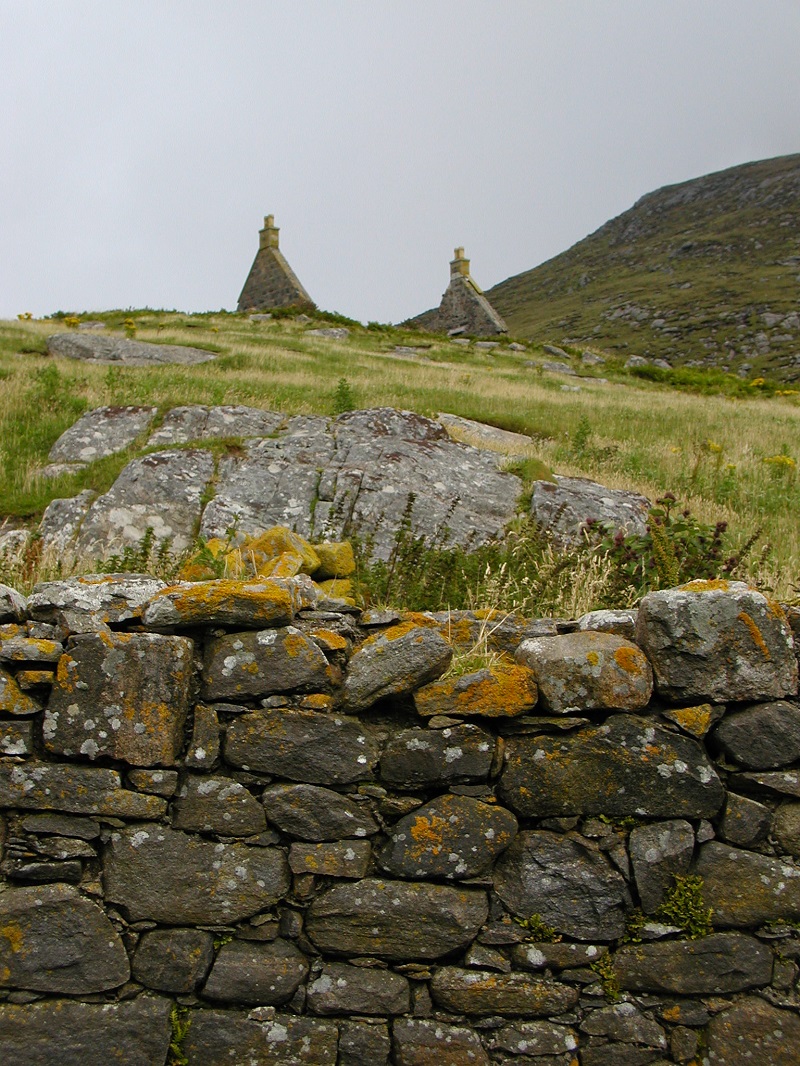 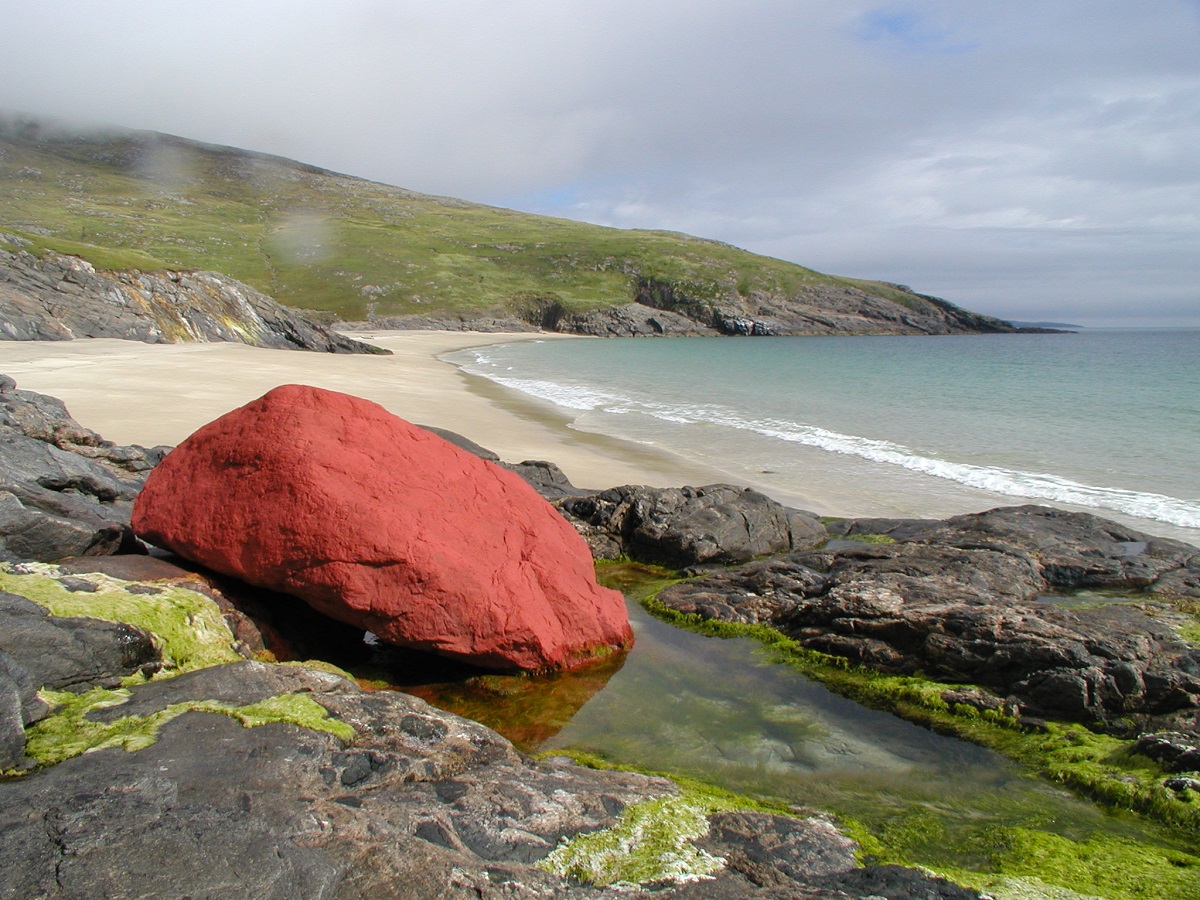 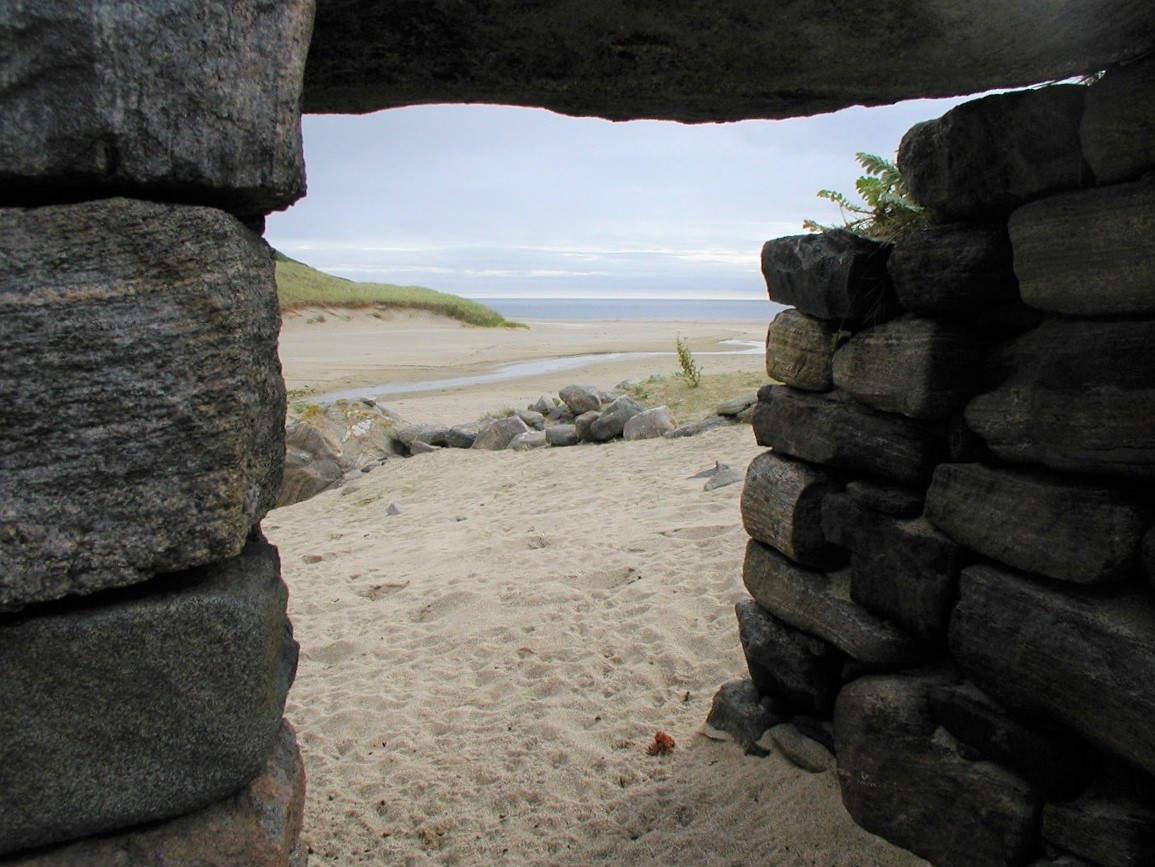 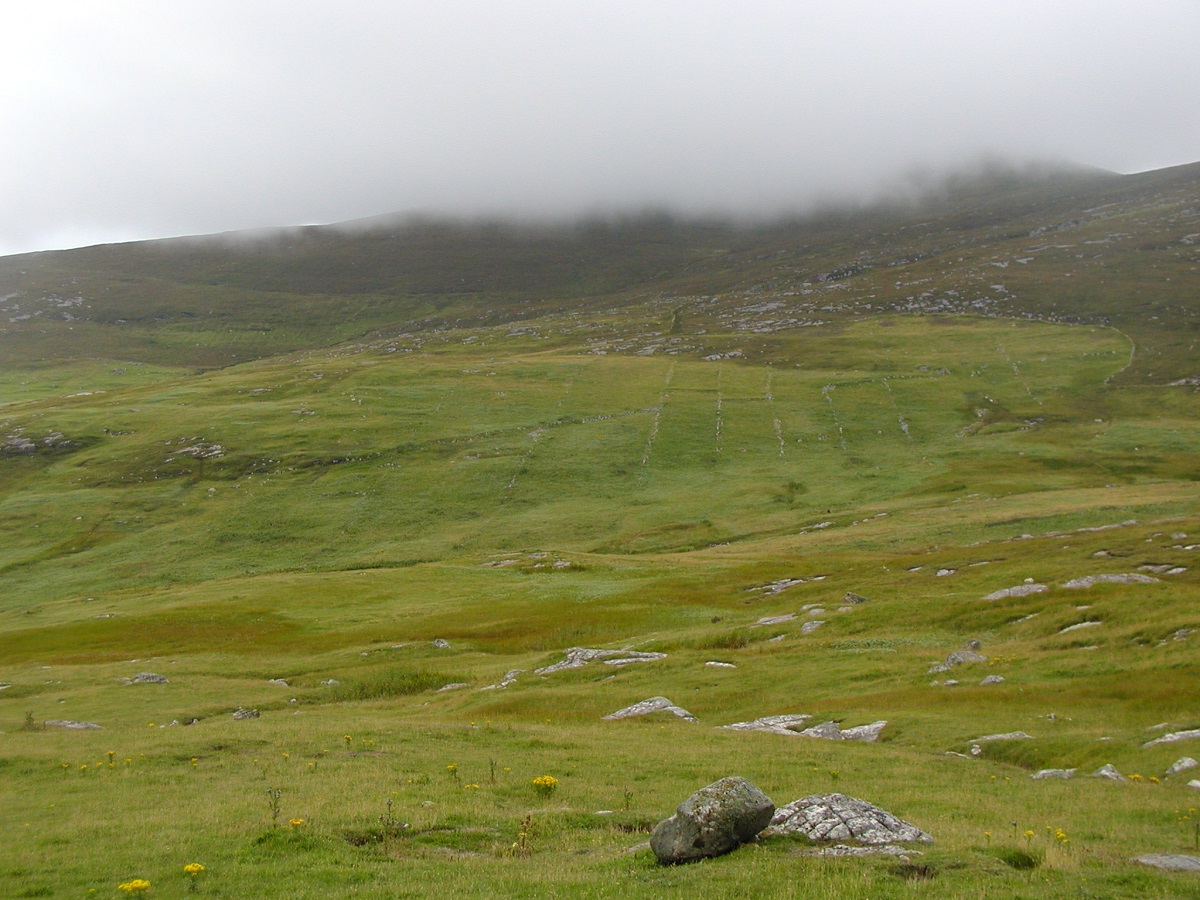 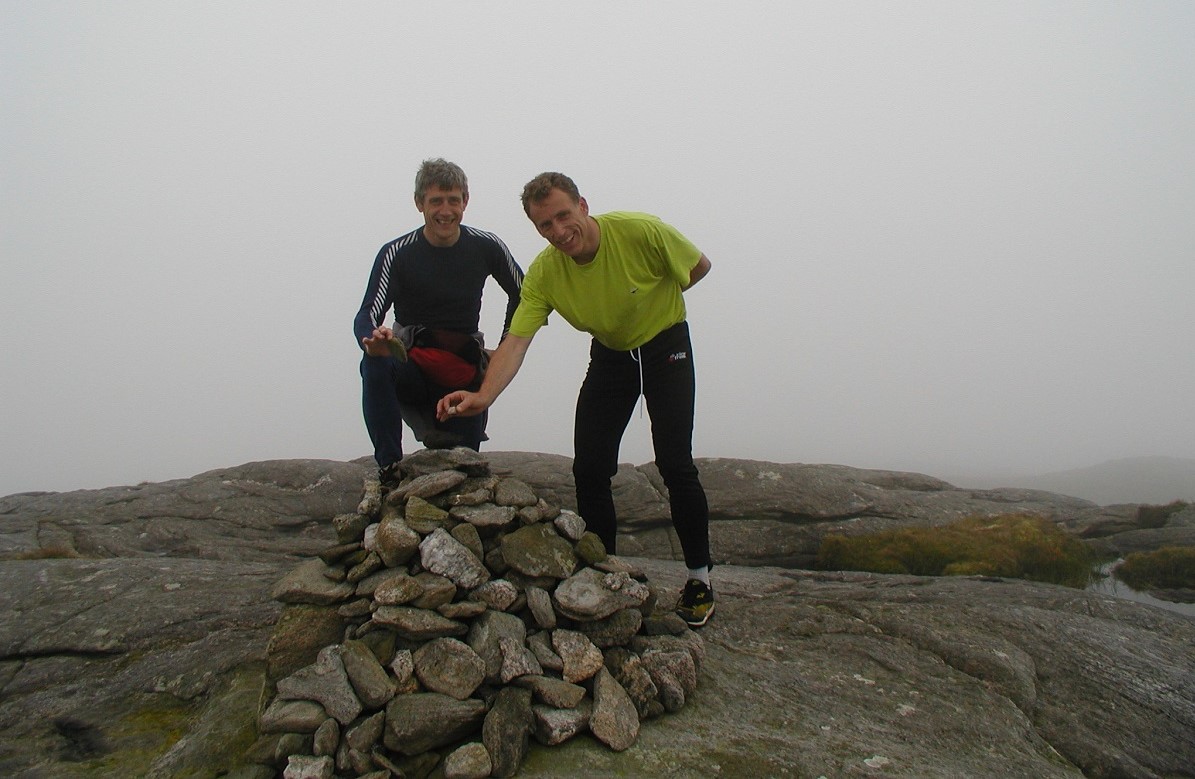 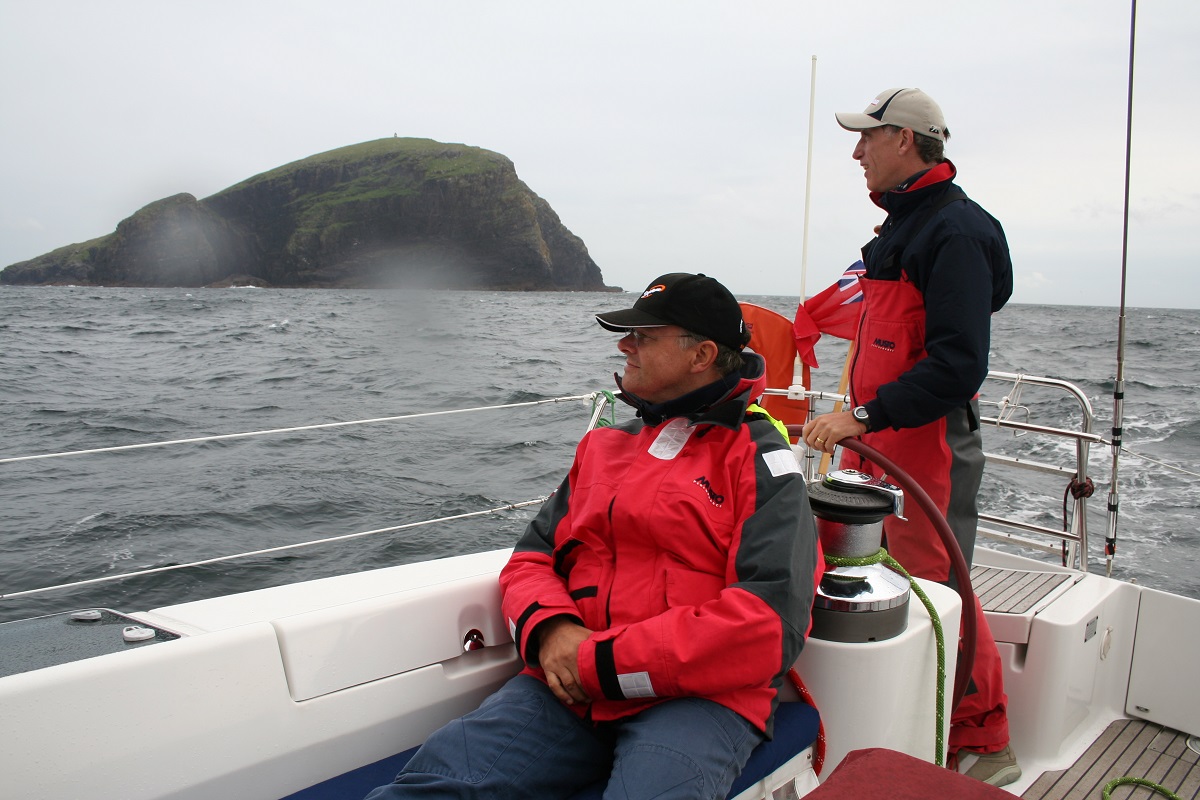 Sorry no video – need to go back again !