Soyea Island Loch Inver  (Sheep Island) is an uninhabited rocky island within the North West sea-loch of Loch Inver. This little Scottish Island is an island often by passed by fishing fleets and visiting yachts to Lochinver

Soyea Island Loch Inver  (Sheep Island) is an uninhabited rocky island within the North West sea-loch of Loch Inver. It is located 3 miles (4.8 km) west of the fishing port of Lochinver. This little Scottish island marks the entrance and final approaches to the fishing harbour of Lochinver. Soyea rises to 38 metres, is half a mile long from east to west and an area of 20 hectares.

I made the most of the chance of a quick on-and-off landing on Soyea presented itself on what was an end of season sail from Ullapool to Lochinver.

Soyea is usually a place of crashing south westerly swell and waves. Today the island offered shelter to a light easterly breeze. Before selecting where to anchor I had to determine which was the highest of the two conspicuous peaks on the island. My OS App confirm that the  easterly of the two at 38m is the highest by a mere 2 meters. The island is recorded as uninhabited and due to the lack of suitable natural landings highly unlikely to be grazed in any way by sheep.

I scoured the sea charts for a bay that could offer some shelter to an unattended yacht. The chart showed me a couple of options and I chose the bay at the north east shore. The bay also offered me a short route to the hill top and less time off the yacht. I decided to anchor inside Bogha Leathan (Broad Rock) reef. To the shore side sheer rock rose some 20 meters or so straight out of the sea.  At the other side of the bay rocks shelved out of the sea and on the flat slabs of rock large seals lay sunbathing in the late autumn sun. The smooth water in the middle of the bay was peppered with bobbing inquisitive heads.

Having anchored and satisfied that the anchor was holding I jumped into the rubber dinghy to paddle ashore.  Ahead lay and deep gut cut into the sheer rock. The rocks at the top end looked smoothed and not badly encrusted in dinghy piercing barnacles.

Scramble to the top

With dinghy hauled up above high-water line I nervously set off for the top. Leaving the yacht unsupervised on anchor in a rocky cove is never a relaxing experience, especially when route to the top involved gullies and dips from which the boat would be out of view.

The island was a classic rough un-grazed lump of rock.  Heather and grasses were knee deep, and in places waist deep with occasional bare rock weathered by the westerly gales. Small scatterings of ragged bushes and saplings had worked their way through the heather. The heather was tall, woody and ideal for scratching, cutting and ‘rashing’ shins and ankles.

The clamber to the top was short, steep and rough and was pleasantly surprised when I emerged from a deep gully to see a grassy patch on the hill-top. One last scramble through the heather and I stood with a smug satisfaction on the top of Soyea.

Under the gaze of Sulliven

From the high point the views to the west of the island and out to the open and uninterrupted Minch and Outer Hebrides were impressive. They were wholly eclipsed by the inland view and the panorama of ancient Torridonian sandstone peaks. Sullivan and its supporting cast of ancient mountains more than likely started life off somewhere near the equator. They now stood steep and weathered and bore witness to their well-travelled, glaciated and ancient past.

With summit done it was time to scamper down and get back to the boat. On the way down I came an area of rock that had a thick blanket of green lichen. The blanket is a testament to the glorious clear air of the west coast of Scotland.

Adjacent to Soyea is a tidal island separated by the merest splits in the rock. It was too tempting to not visit the high point of Meal Nan Uan. After a quick back-track and step over the ‘crevasse’ that separated the two islands I was soon on a smooth grass surface that was a pleasure to run on after the scraggy heather of Soyea. Why, I thought to myself should the main island be thick with heather and here be carpeted in lish green grass.

I scaled the top and now more relaxed with a clear view of the boat I stood and absorbed the stunning surroundings. The breeze was light and the sun shining on a perfect late September day. I stood for a minute and inhaled the place before making back down to the dinghy. I was soon back on Trade Winds and onwards to Lochinver to haul out at what had been a truly wonderful season of sailing on the west coast of Scotland. 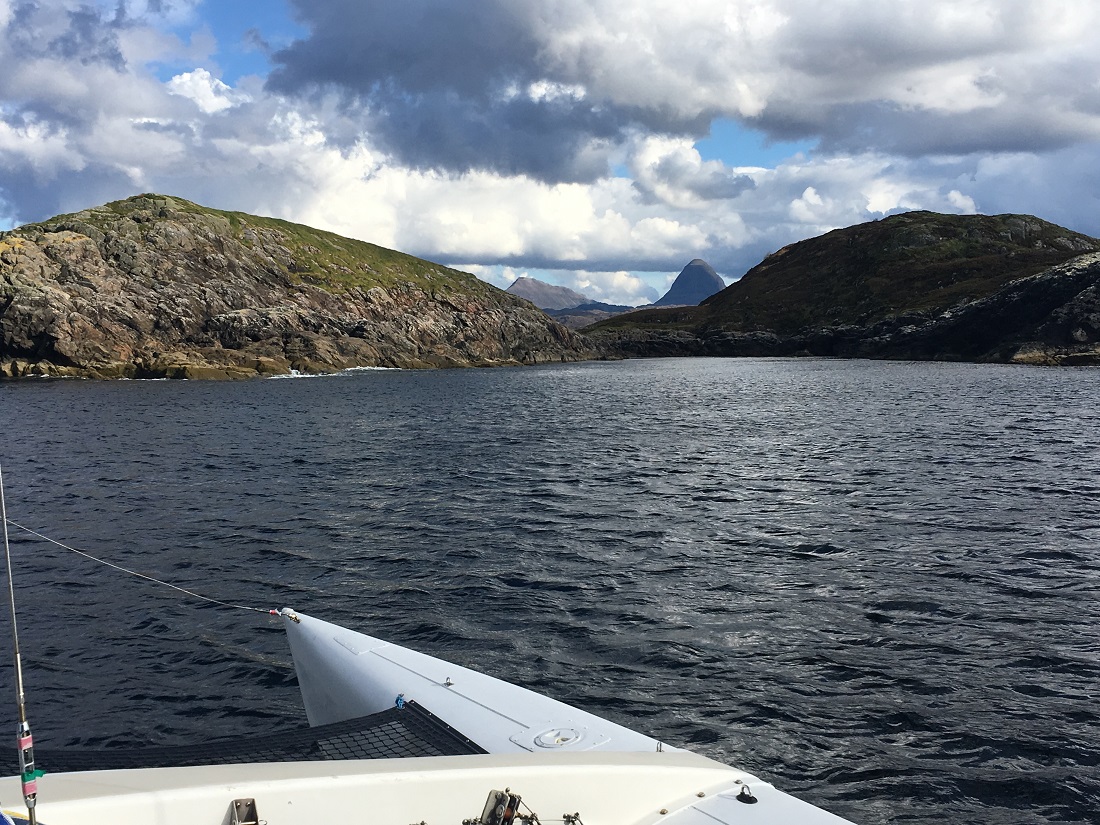 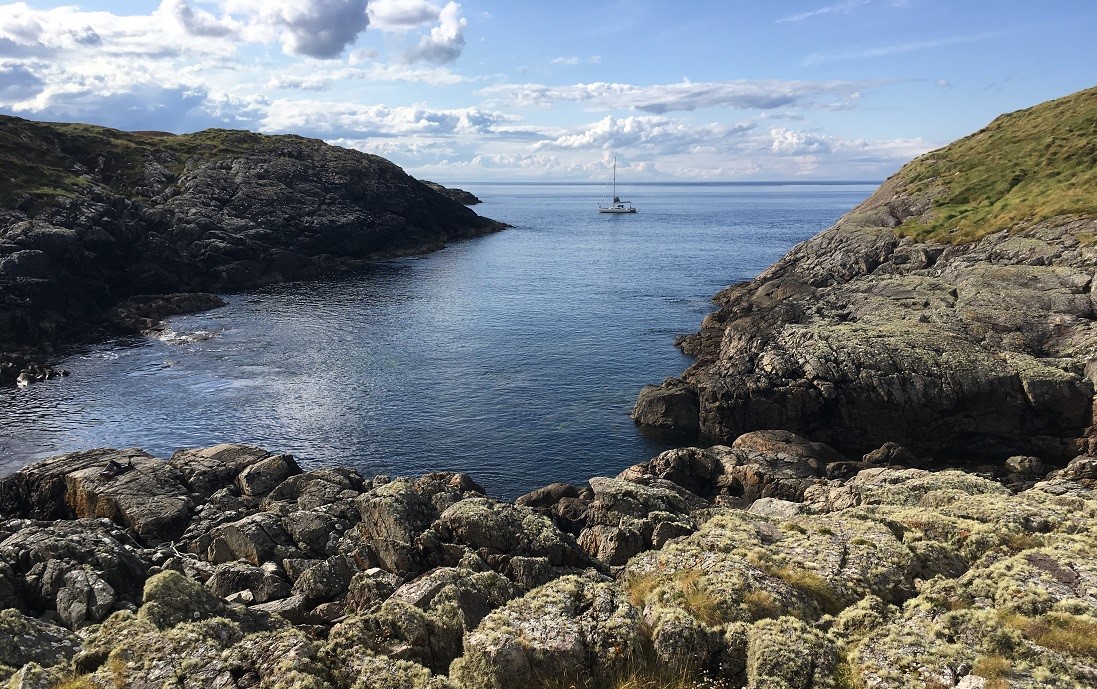 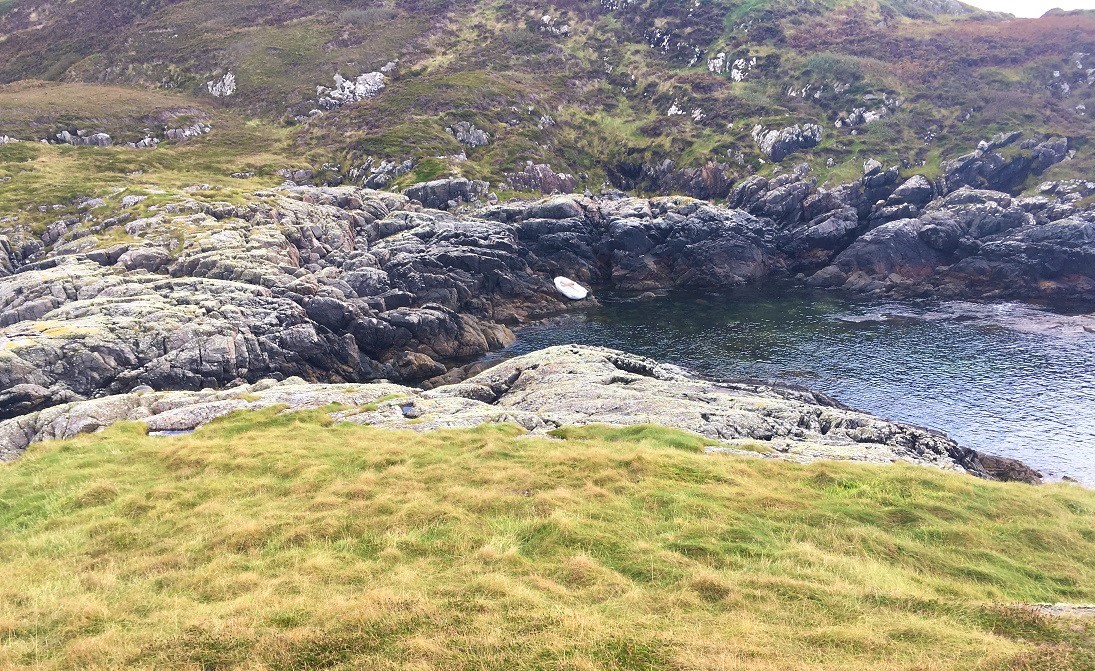 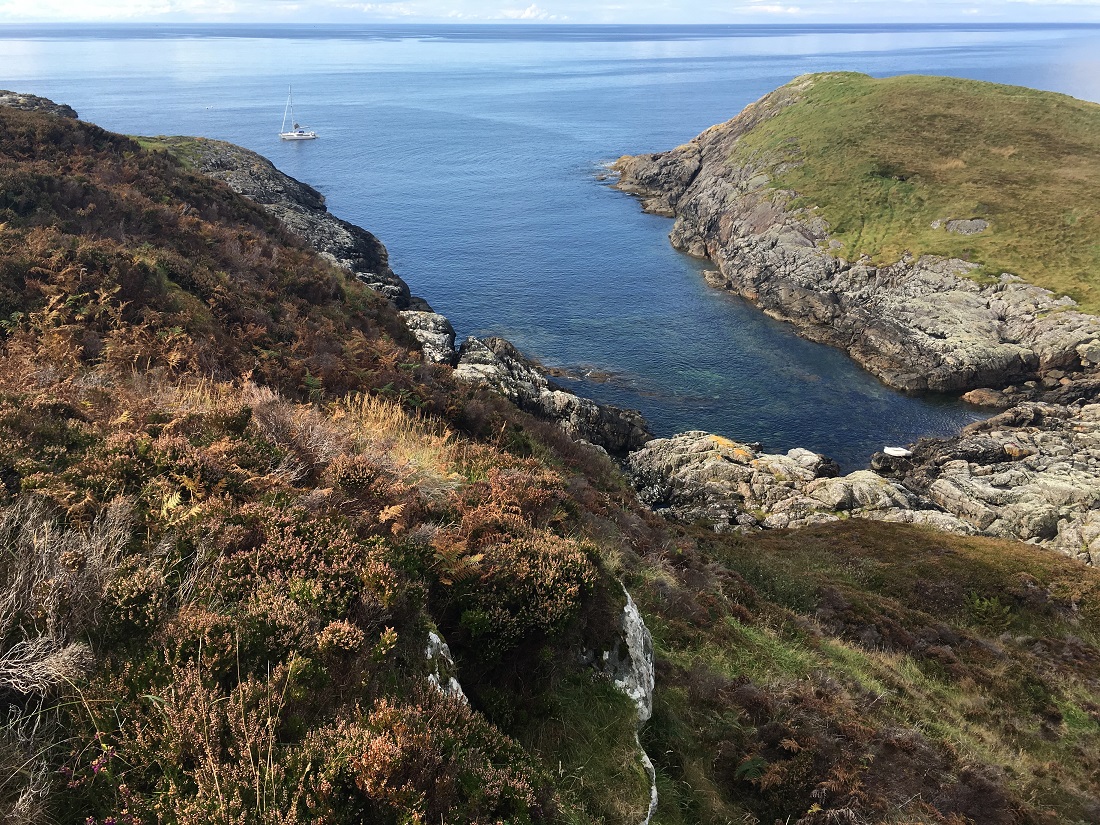 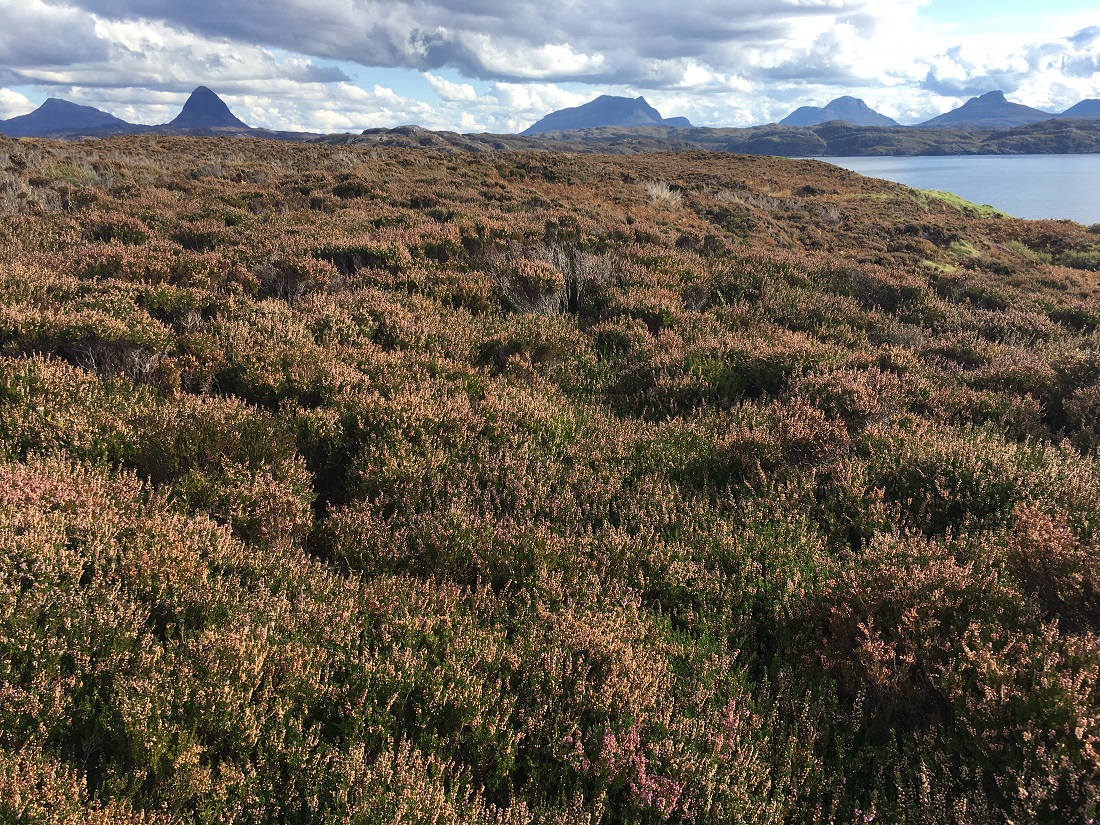 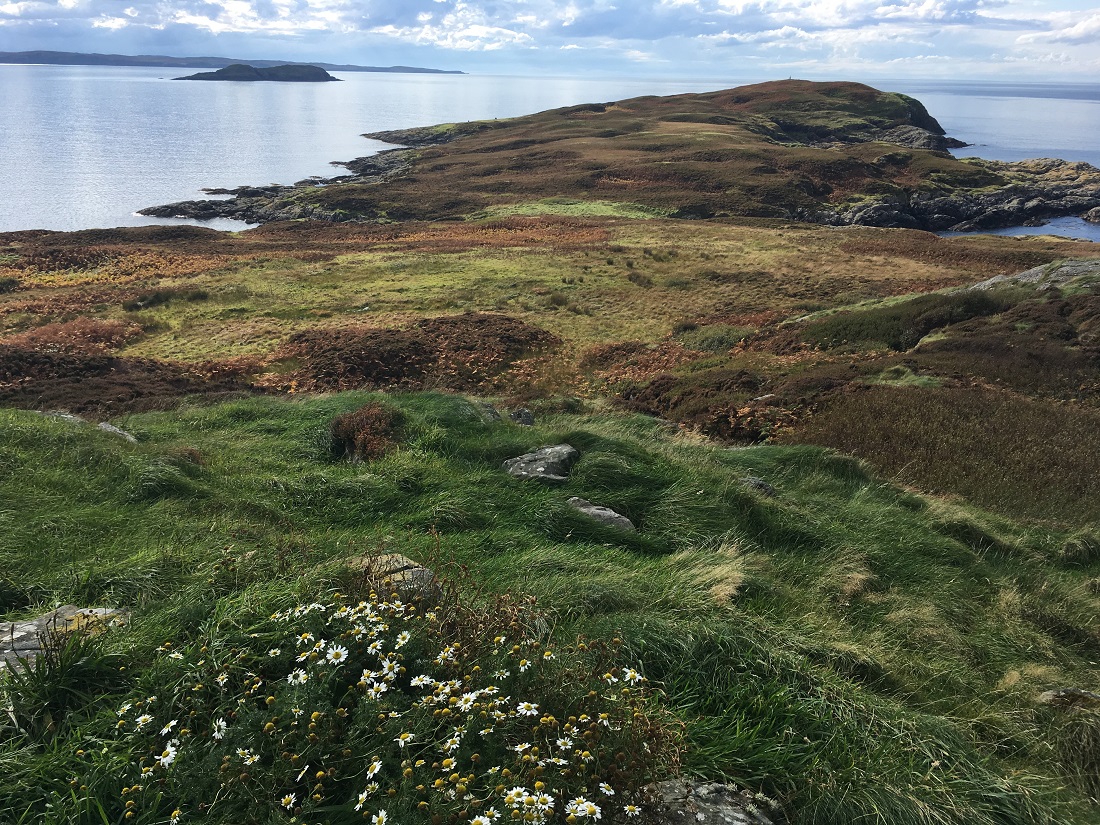 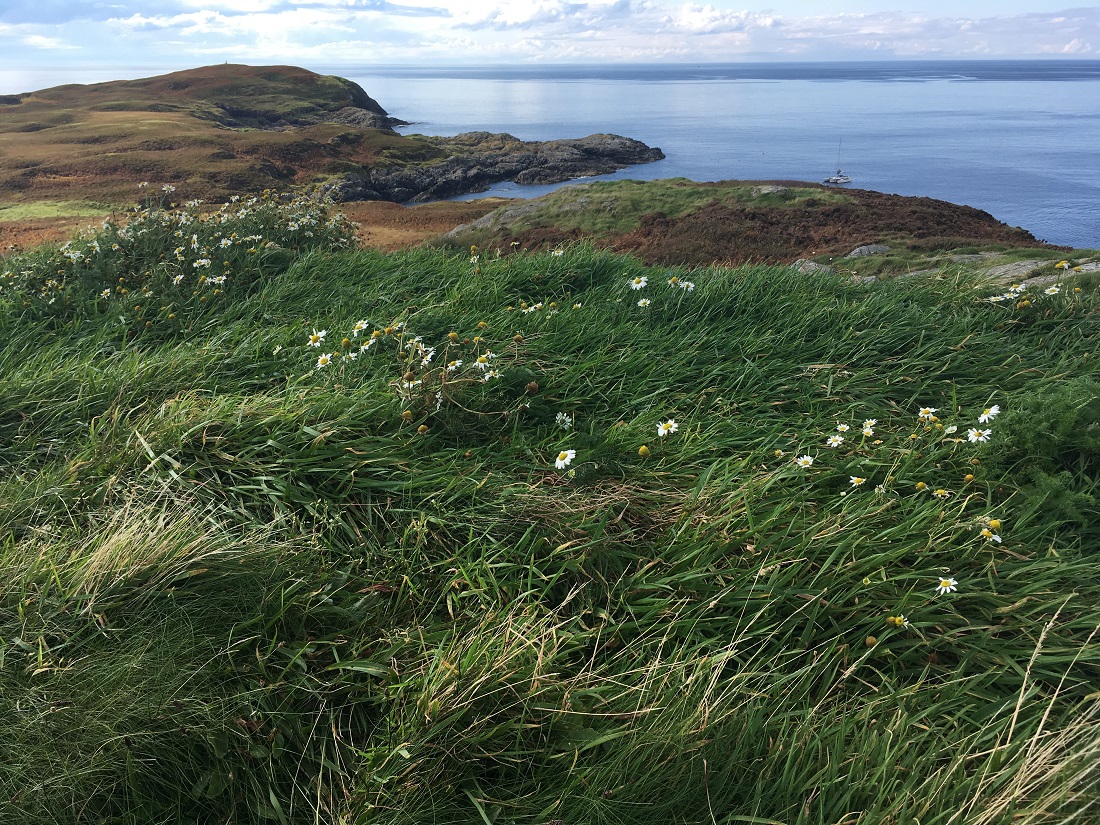 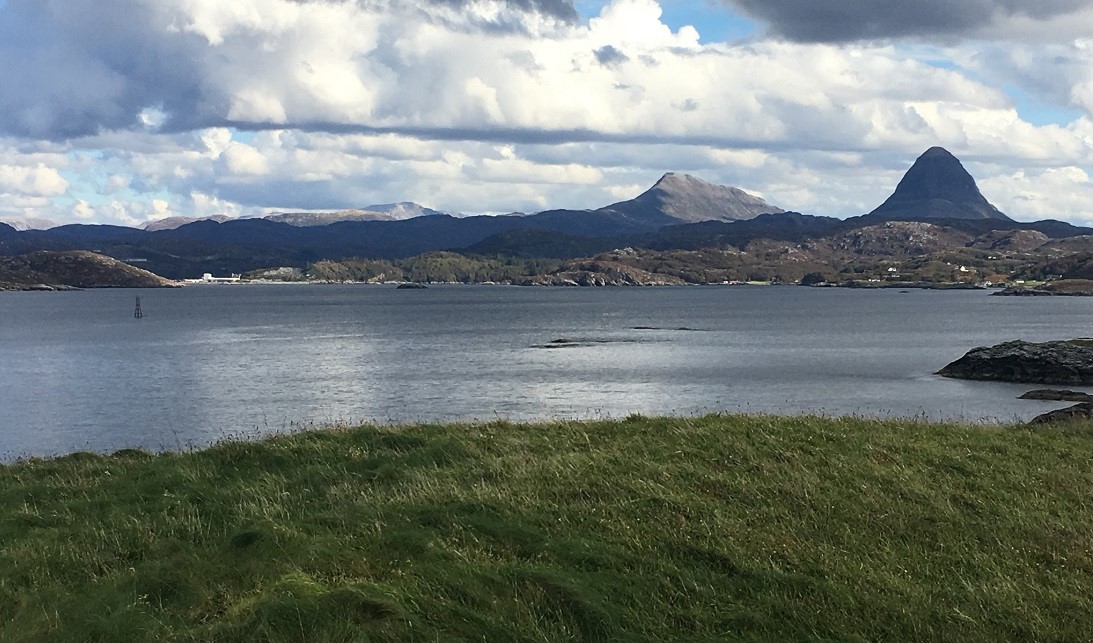 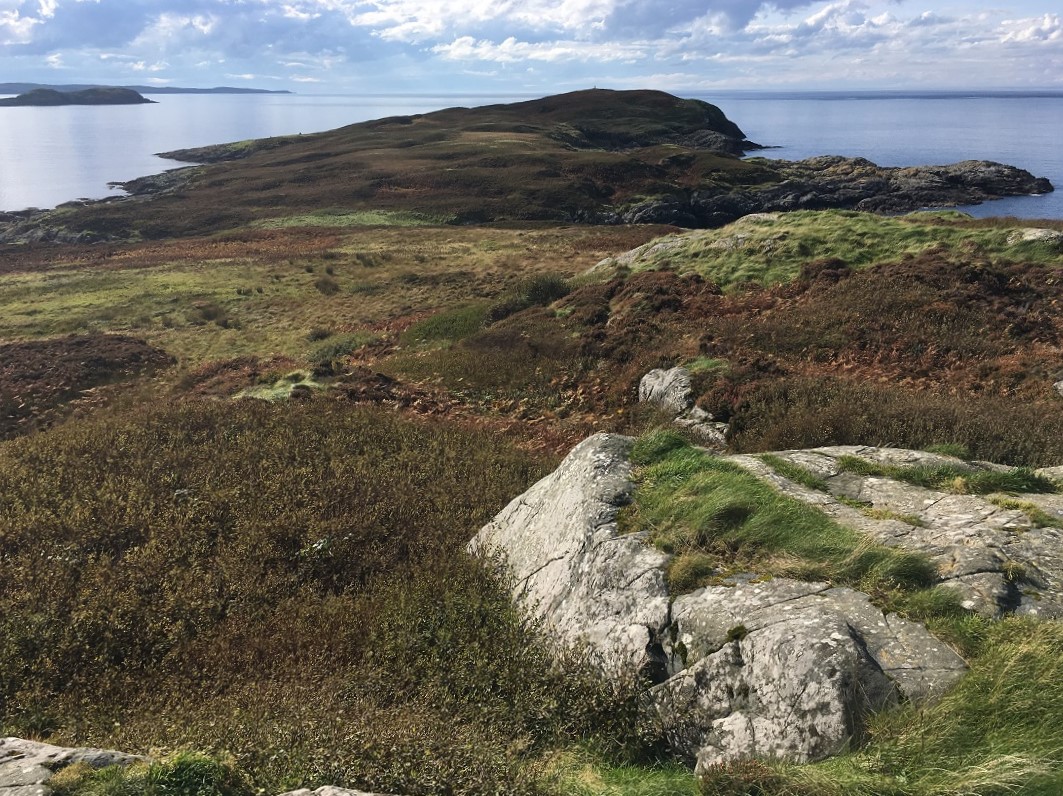 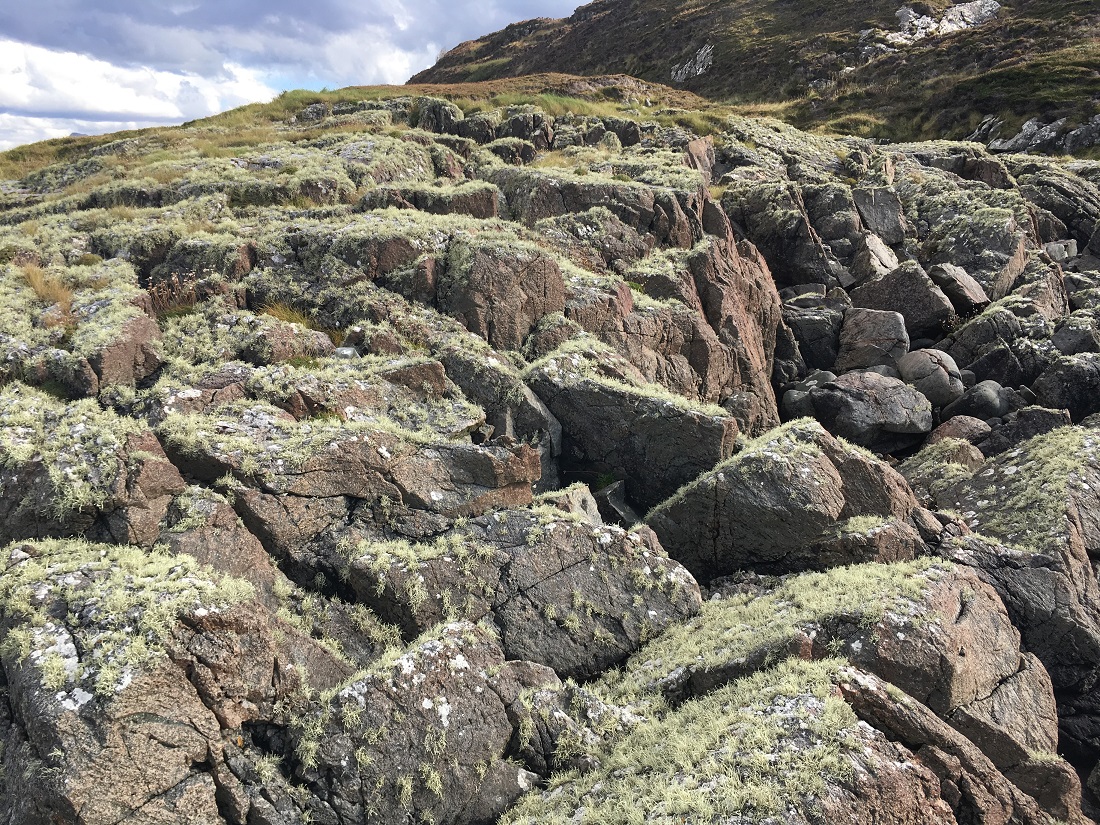 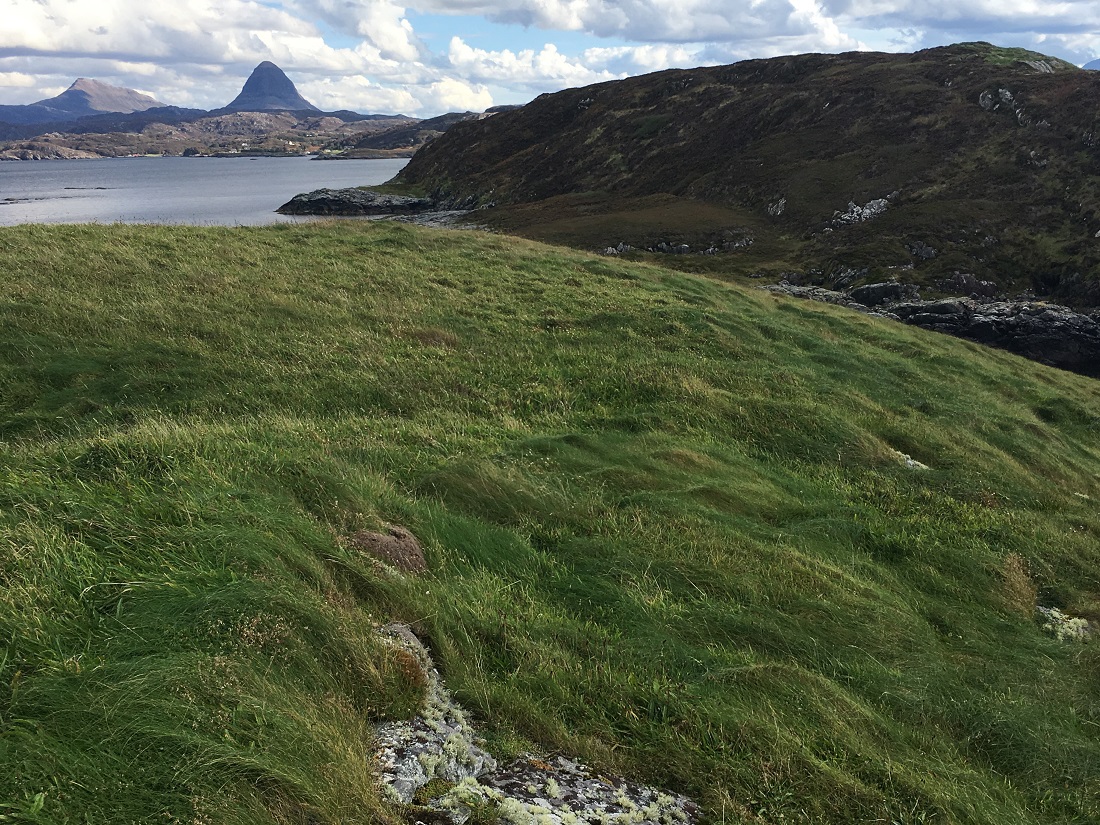 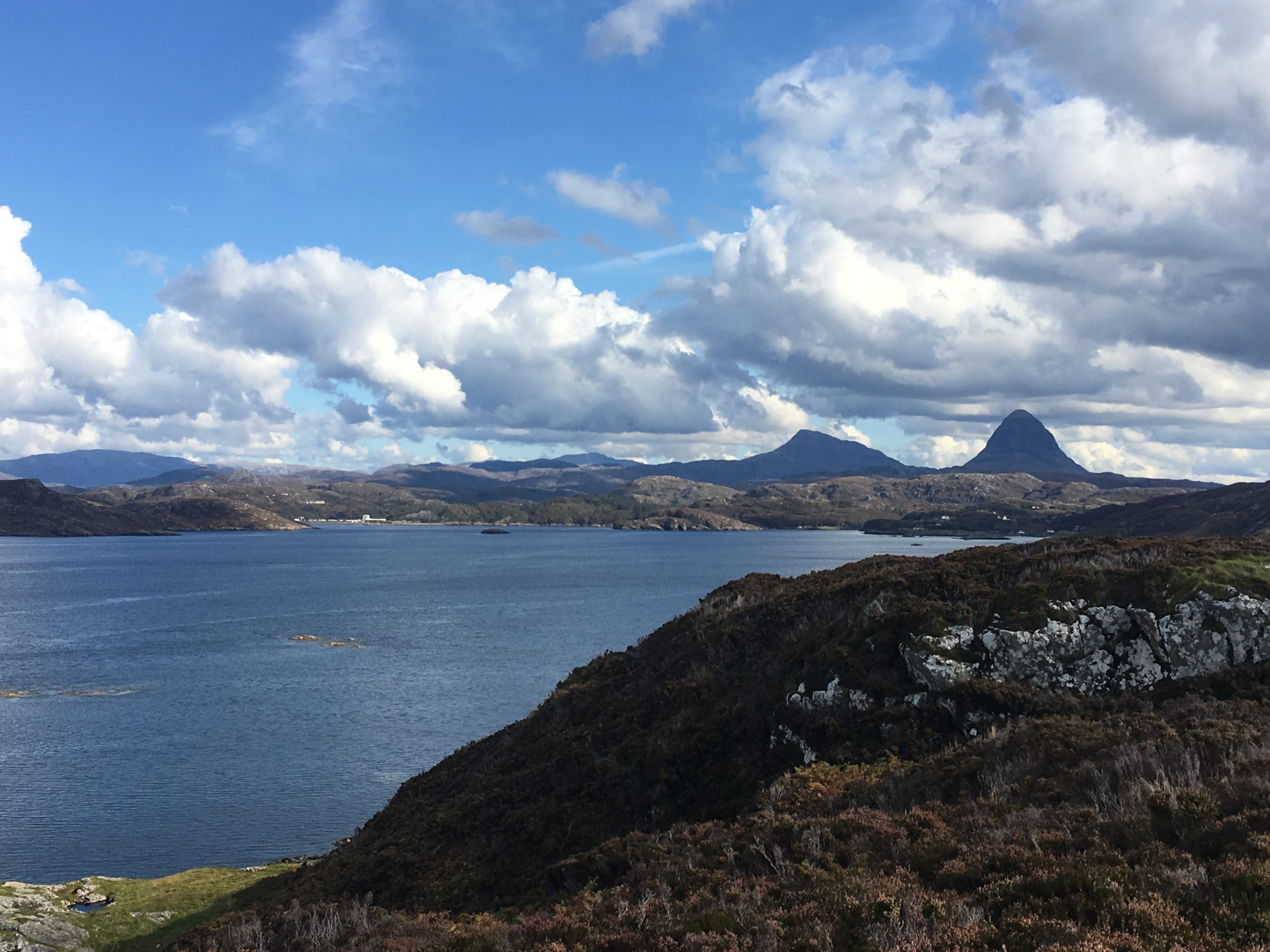 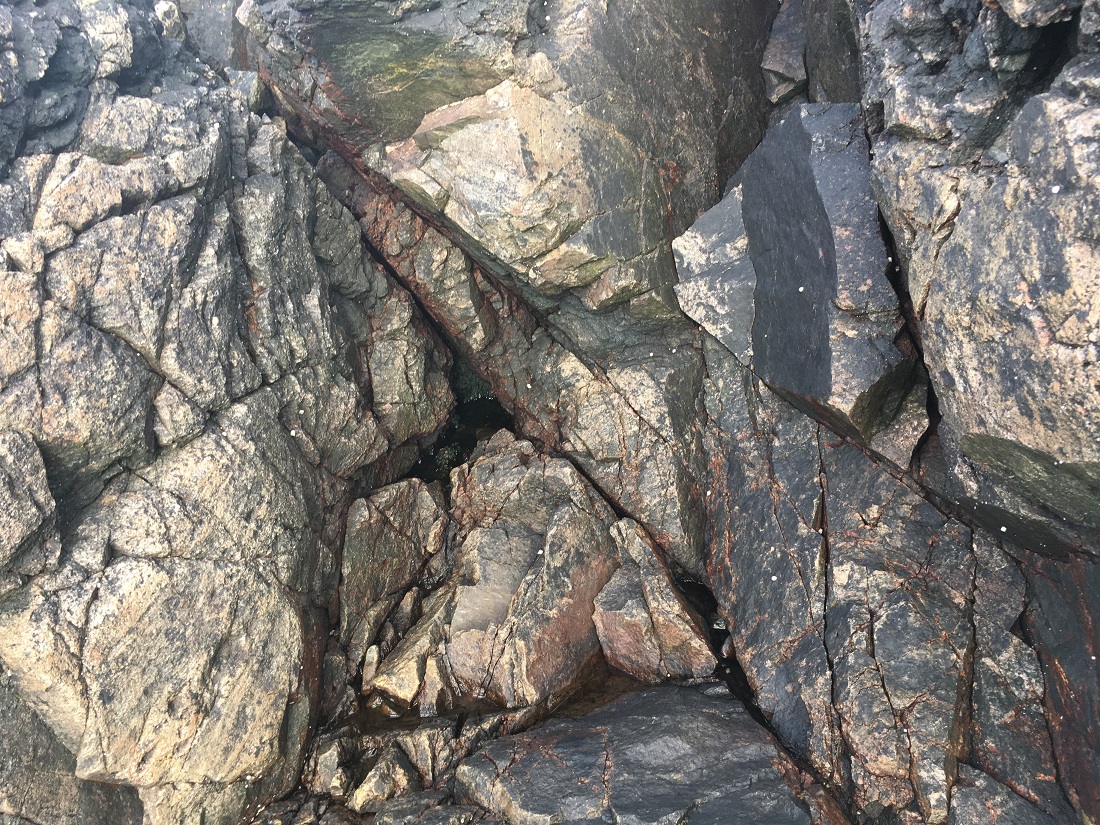 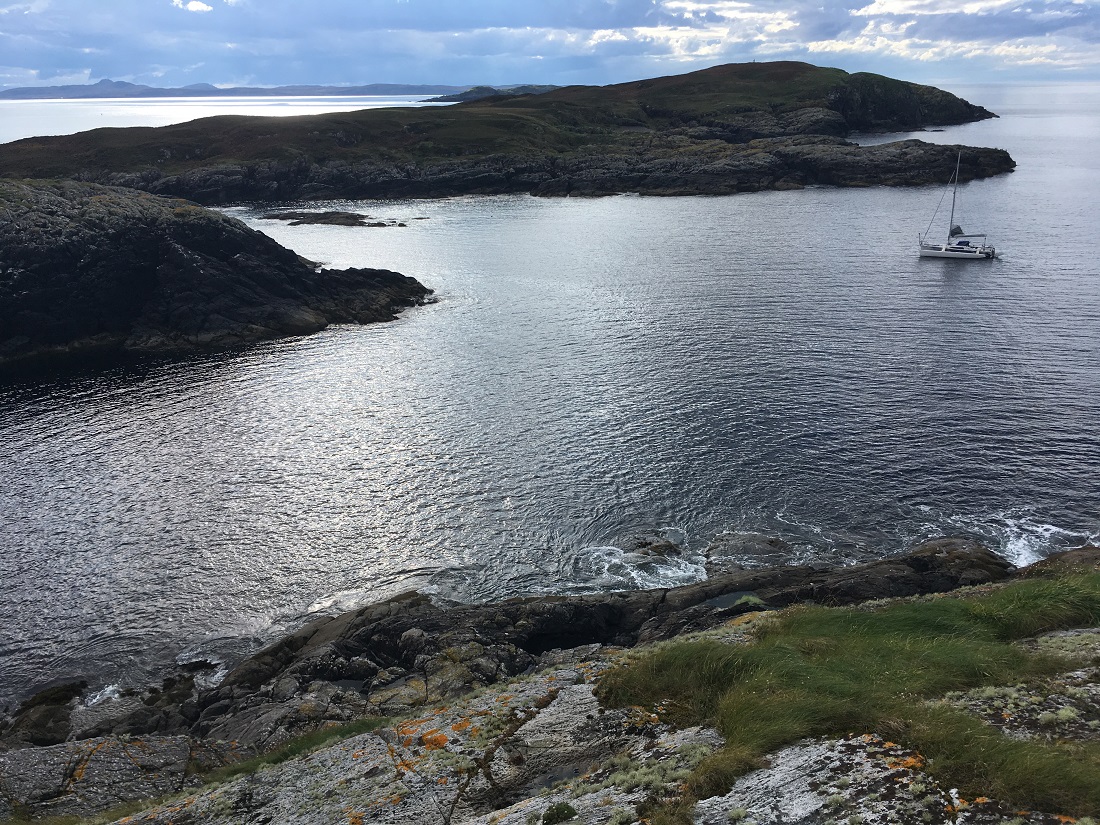