Eilean Fada Mor sits nestled between Tanera Beg and her big sister Tanera Mor. Uninhabited and without any remains of buildings or settlements there is not a great deal to say about this little lump of sandstone other than its being a wondrously beautiful little island with a dubious claim to fame as the resting place in 60 ft of water the recently shipwrecked merchant ship Jambo.

The German-owned Jambo was carrying 3,300 tones of zinc sulphide when it ran aground off Eilean Fada Mor on 29 June 2003. Immediately after the disaster a massive salvage operation was launched to remove the toxic material. A subsequent probe by marine authorities found that the vessel veered off course after an officer fell asleep on duty. Full MAIB report of incident here

The chief officer, who was alone on the bridge, missed his change of direction point off Rubha Reidh, Wester Ross, and only woke up with the noise of the Cypriot-registered vessel hitting rocks. The investigation also found that the seaman assigned to the watch had been absent from the bridge for at least an hour before the vessel grounded. The Marine Accident Investigation Branch (MAIB) report found no watch alarm was fitted on the bridge, nor was there a requirement for one.

The Divernet website has some fascinating images and illustrations of the wreck, where it lies and some more background to the grounding. Here

The entrance into the pool is not one to rush into. The entrance from the south channel is banked on either side by a limpet clad rock face and to the west a low snarling reef of hull ripping rock lying just under the surface. Coming from the south and once in the channel a lump of rock is positioned precisely on the natural line in to the bay. A sharp dog leg course is required to enter the inner pool.

I picked my spot in what offered plenty of swinging room and dropped anchor. The wind was whipping up from the north so we set back with the stern out towards the  narrow channel. The wind was now gusting and I did not feel too happy about leaving Trade Winds on her own in a strong breeze. The mix of shore and reefs was only meters away so we had no room to drag anchor. I decided to have a sleep and sit it out for 45 minutes. I took my position fixes of the shore and then settled down for a power nap. Ten , twenty and thirty minute checks confirmed the anchor was well dug in and not moving. Content with that, it was time for the running shoes and Fada Mor.

The landing point chosen was a slab of heavily eroded flat sandstone that allowed me to drag the dinghy up from the water. That was followed by a scramble on all fours around a jutting face of rock and up onto the lush grass. The wind had the long grass shimmering as gusts raced across the surface. I set off determined to knock off the island as quick as possible as I had a nervousness about the anchorage in such a strong breeze.

The run to the 39m top was a fabulous experience of stepping through the long grass, braken and deep mosses and the contrasting grip and sureness of the bare hard sandstone slabs that broke through the vegetation. The ‘top’ lay beyond the most wonderful flat grass meadow that had wind-blown Cotton Grass dancing in the breeze. The cairn was a jumble of boulders and big slabs piled up together. Someone had spent a fair effort assembling the sizable pieces of rock. Jutting up and topping the cairn was an upended smaller slab of sandstone. Like so many uninhabited and rarely visited islands the cairn was clad in undisturbed and healthy green lichen.

The views were breath-taking. Northwards the settlements around Achiltiubuie, Isle Ristol, the massif of Coigach off to the right and beyond Wester Ross in all its shades of purples and greys stretched into the distance. To the south lay the anchorages and beyond Priest Island and beyond that Gruinard Bay and beyond the mainland and the purple brooding An Teallch and Bein Dearg Mhor. The view eastwards into Loch Broom was blocked by the sizable Tanera Mor, an island for later in the day. Images taken and with the moment savoured I rumbled back down the slope and back to the dinghy for the short wind-assisted paddle out to Trade Winds.

Eilean Fada Mor – the perfect Scottish Island. Clean, untrodden, un-grazed and in a setting of true wildness only the west coast of Scotland can serve up. Despite its remoteness and beauty it had not remained wholly unscathed as it sheltered the wreck of the Jambo, a ship whose cargo could have devastated the island and the surrounding area. 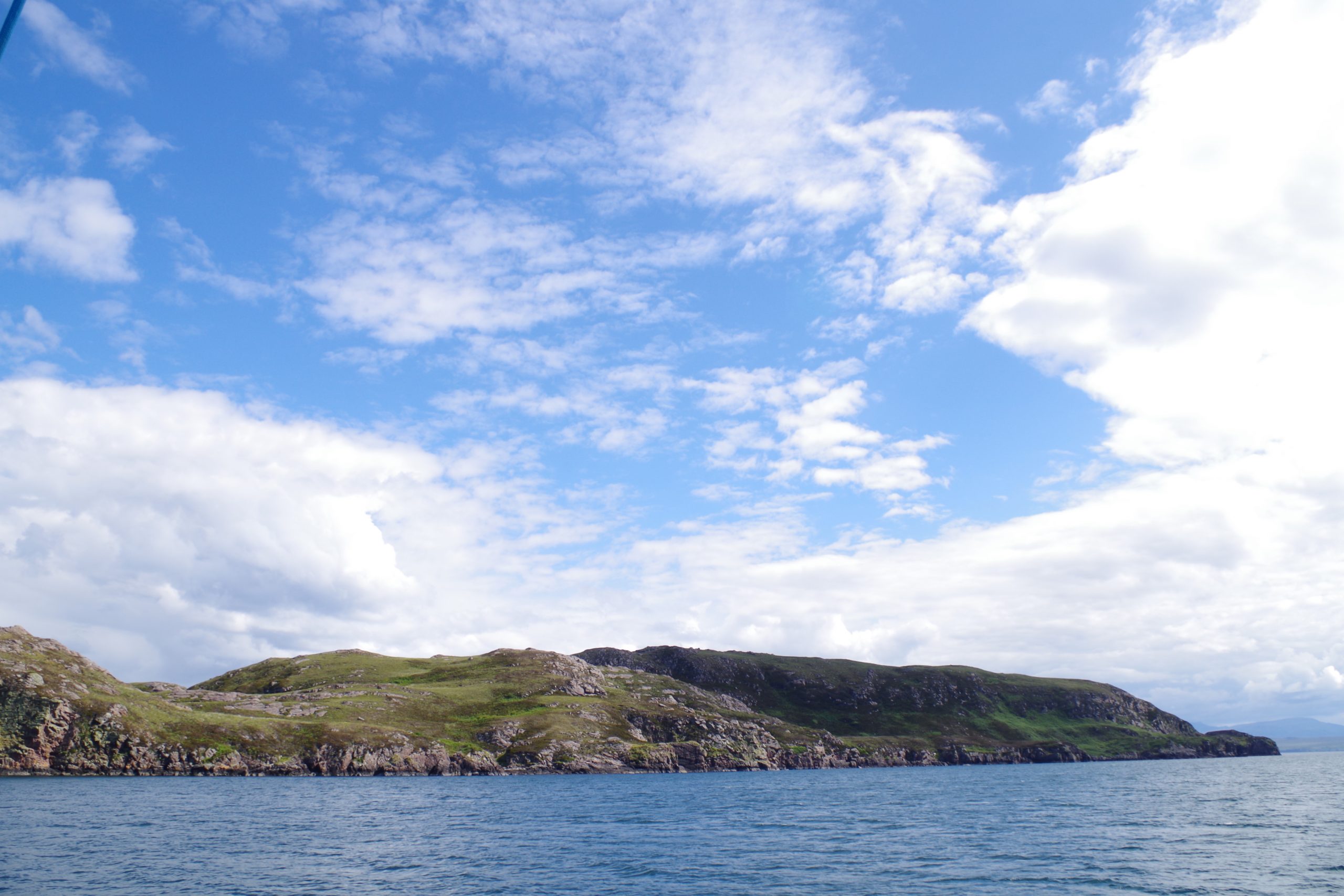 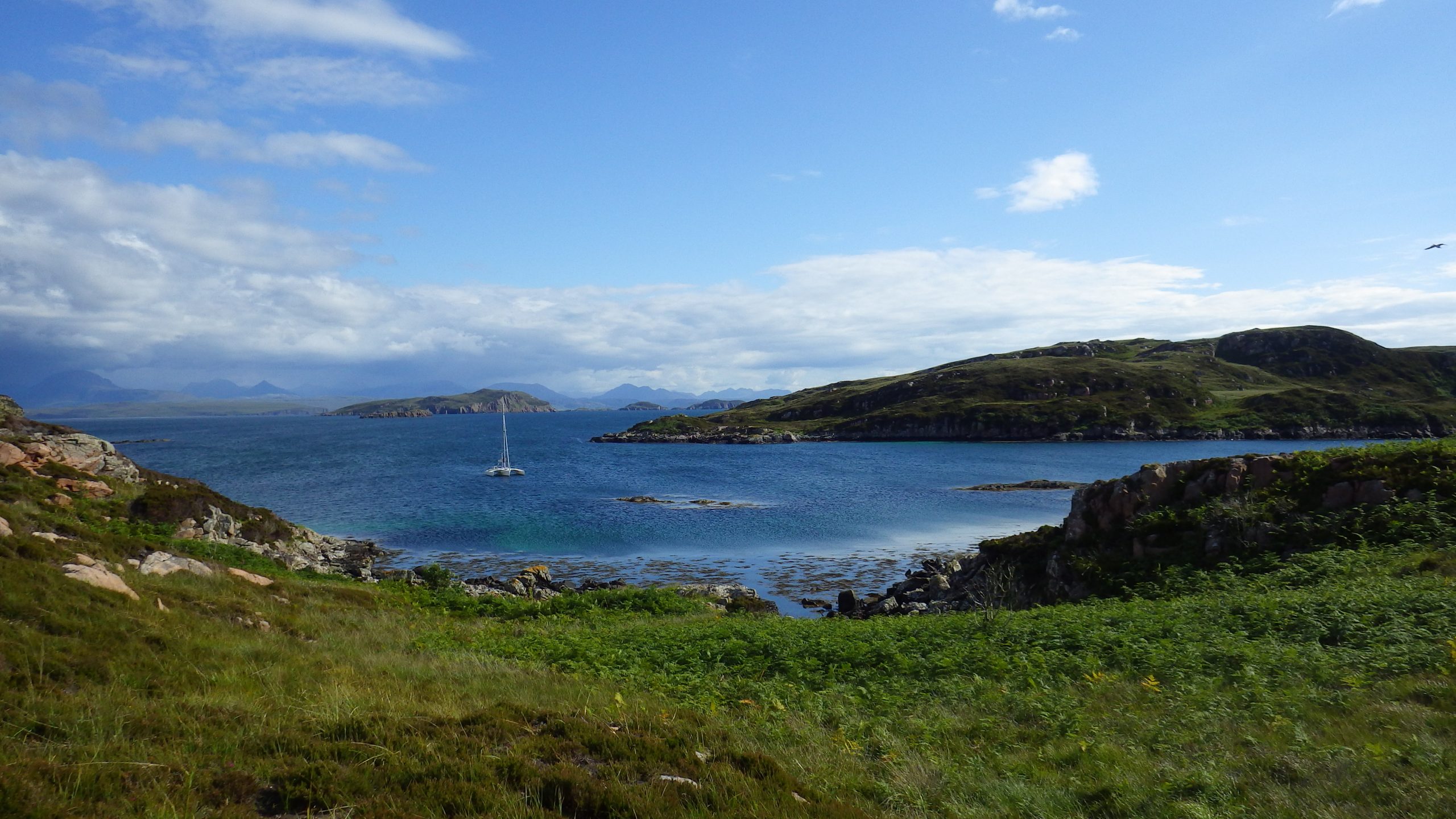 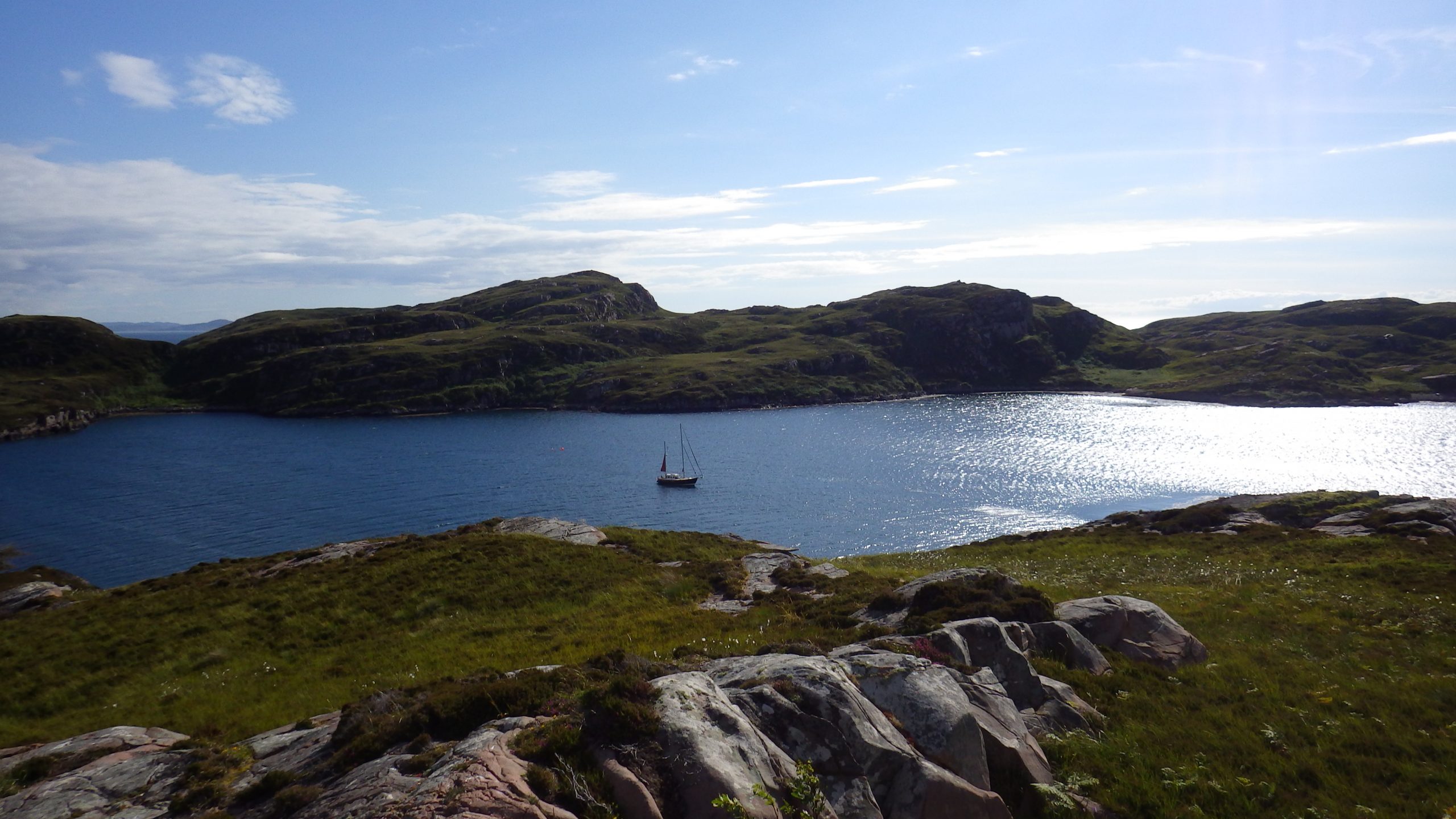 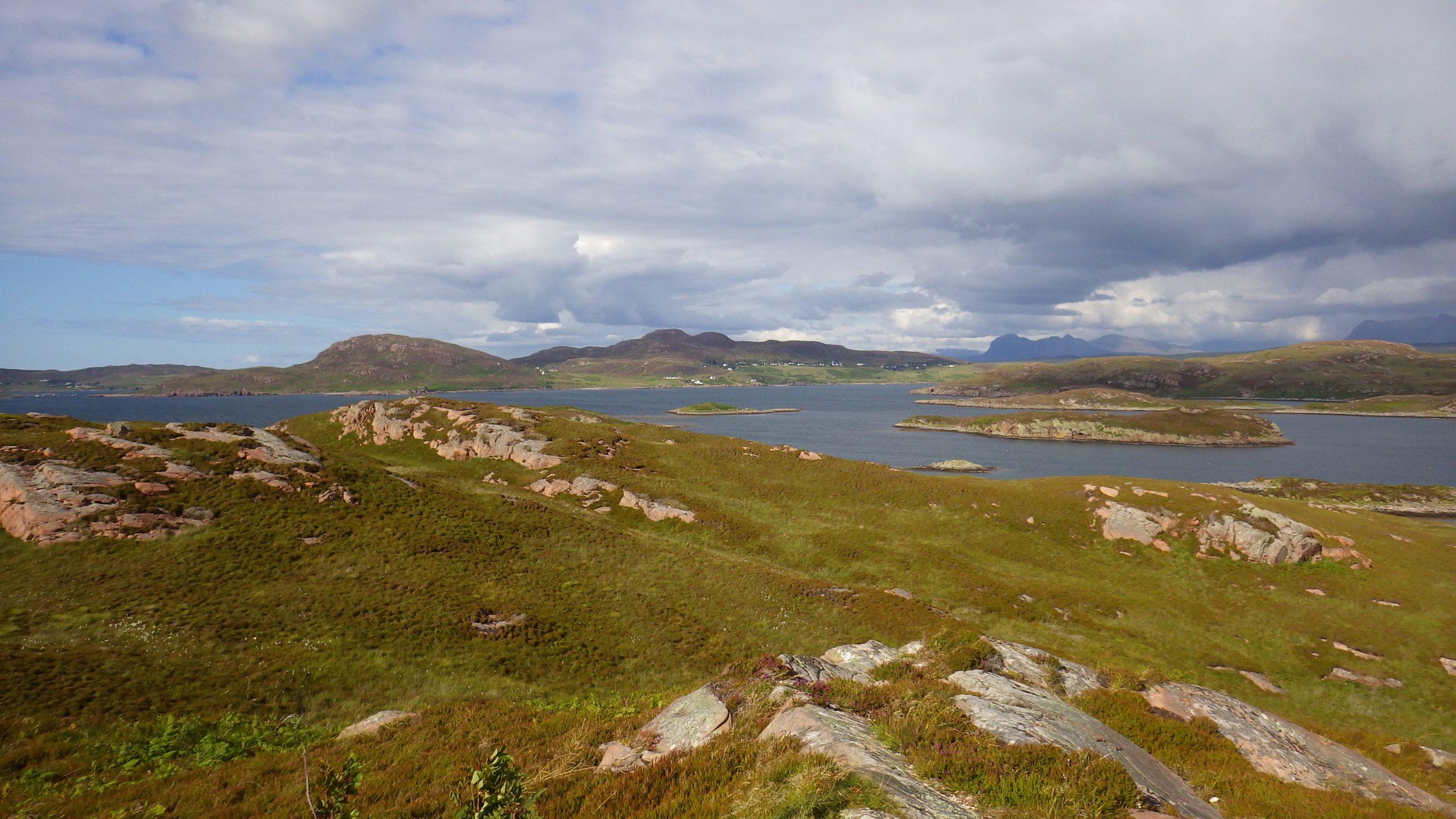 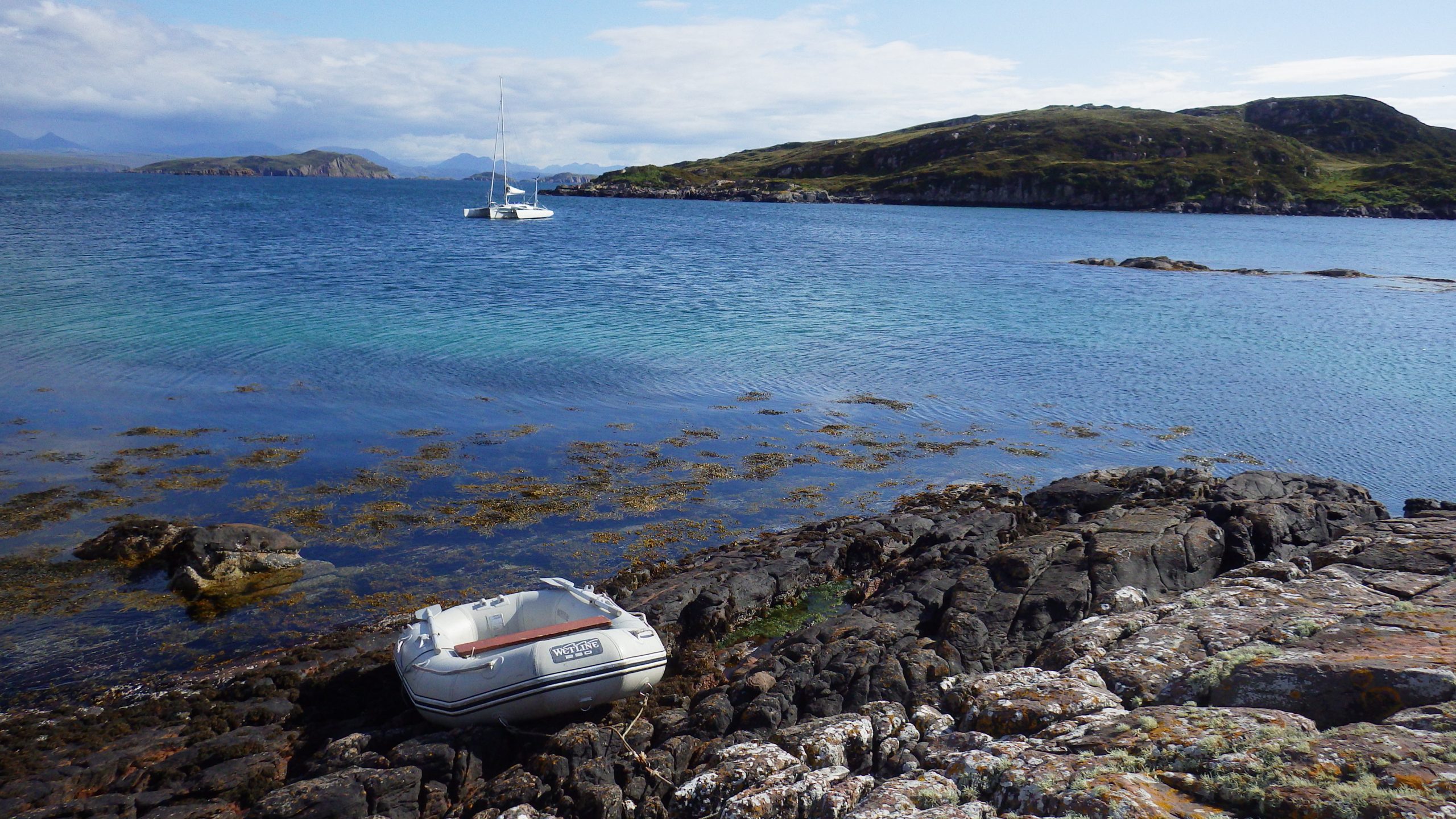 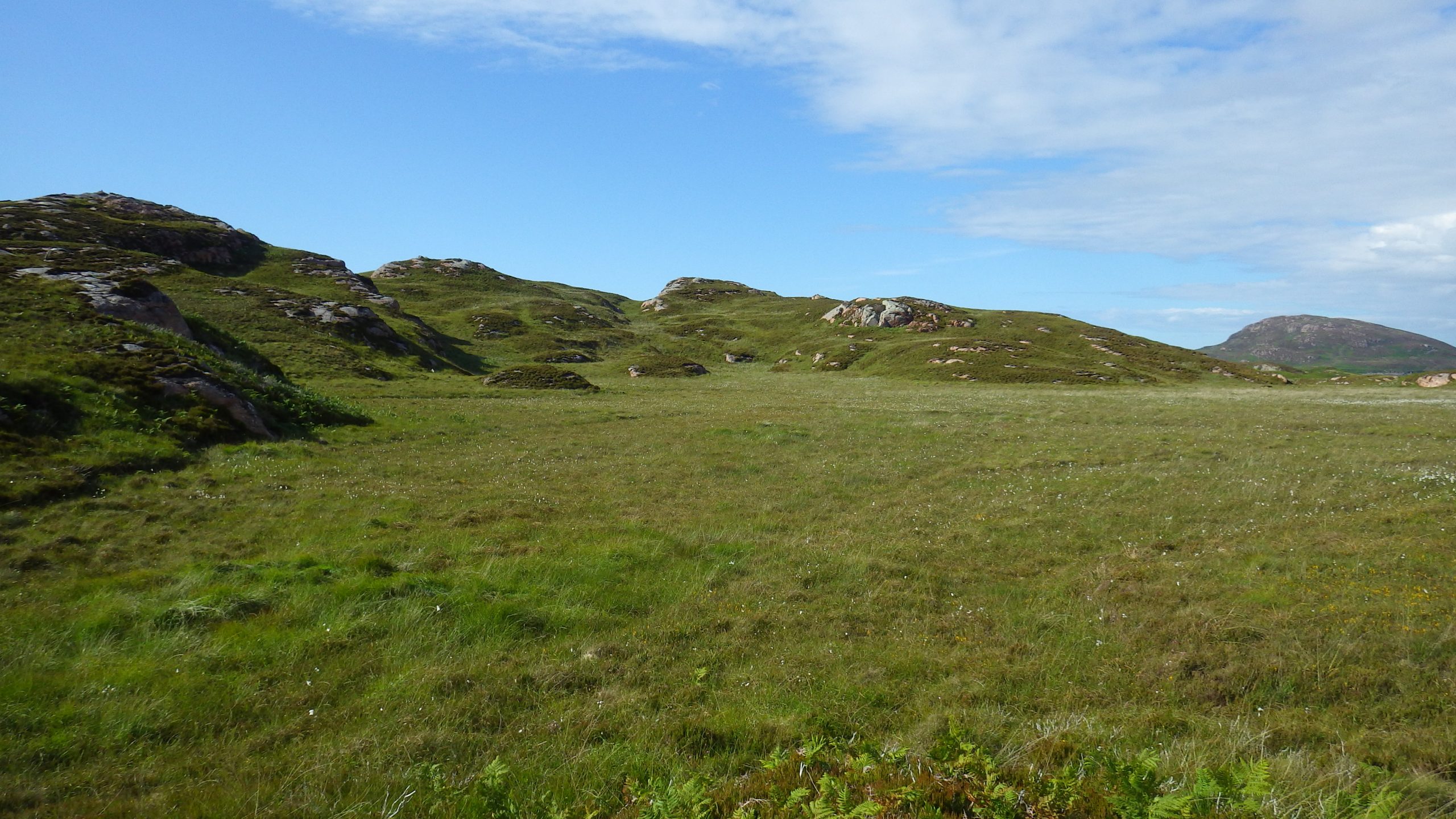 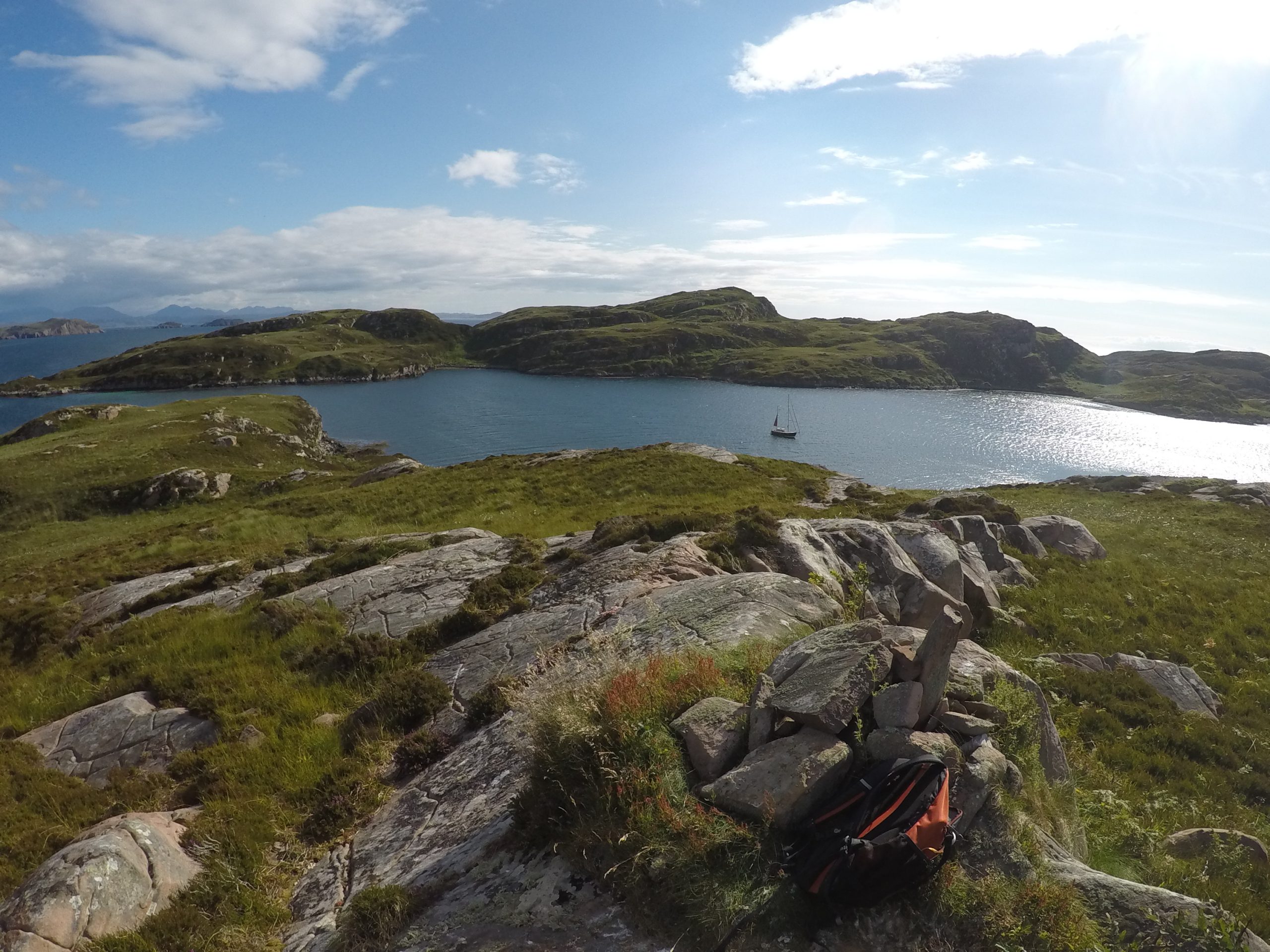 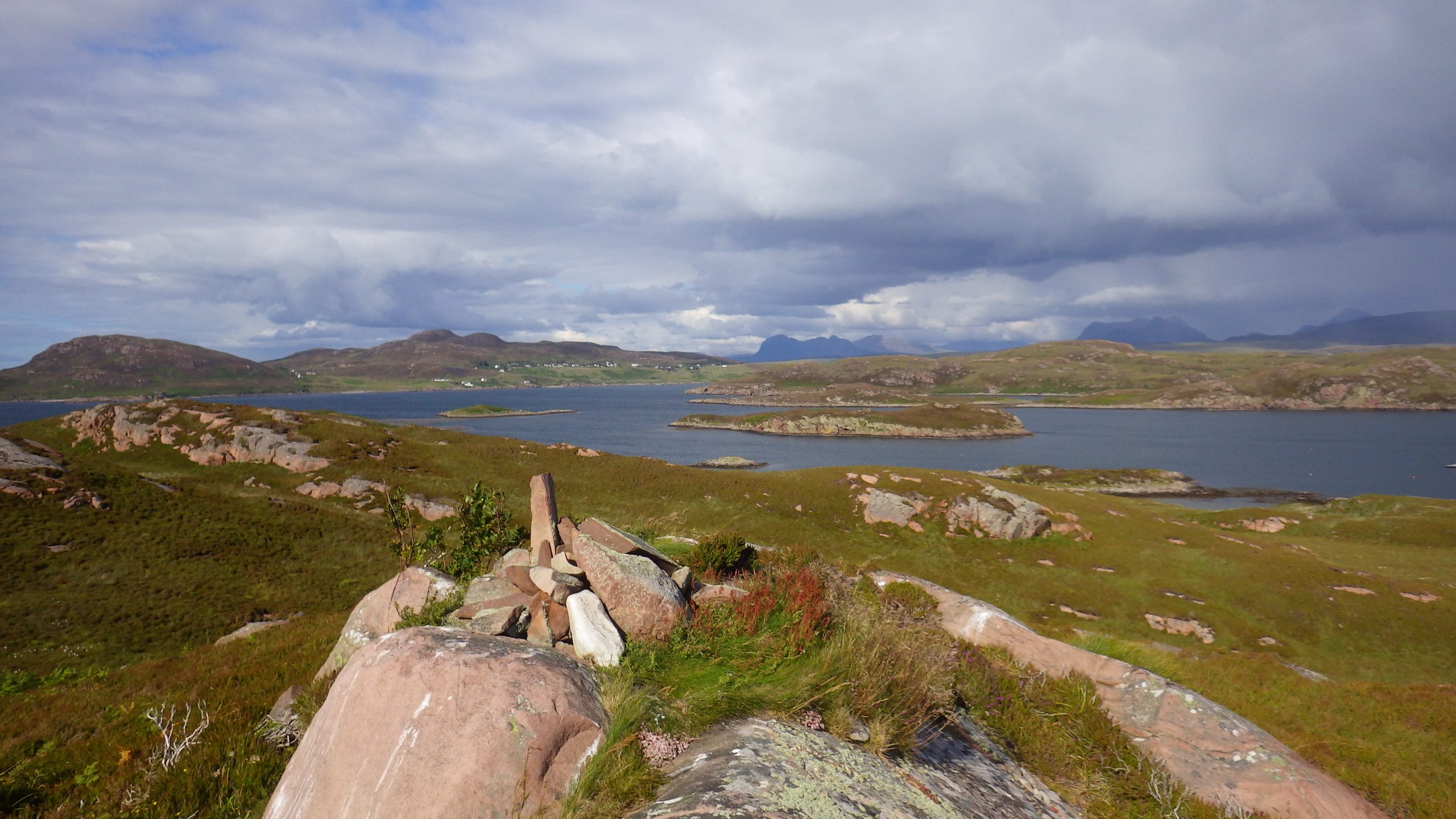 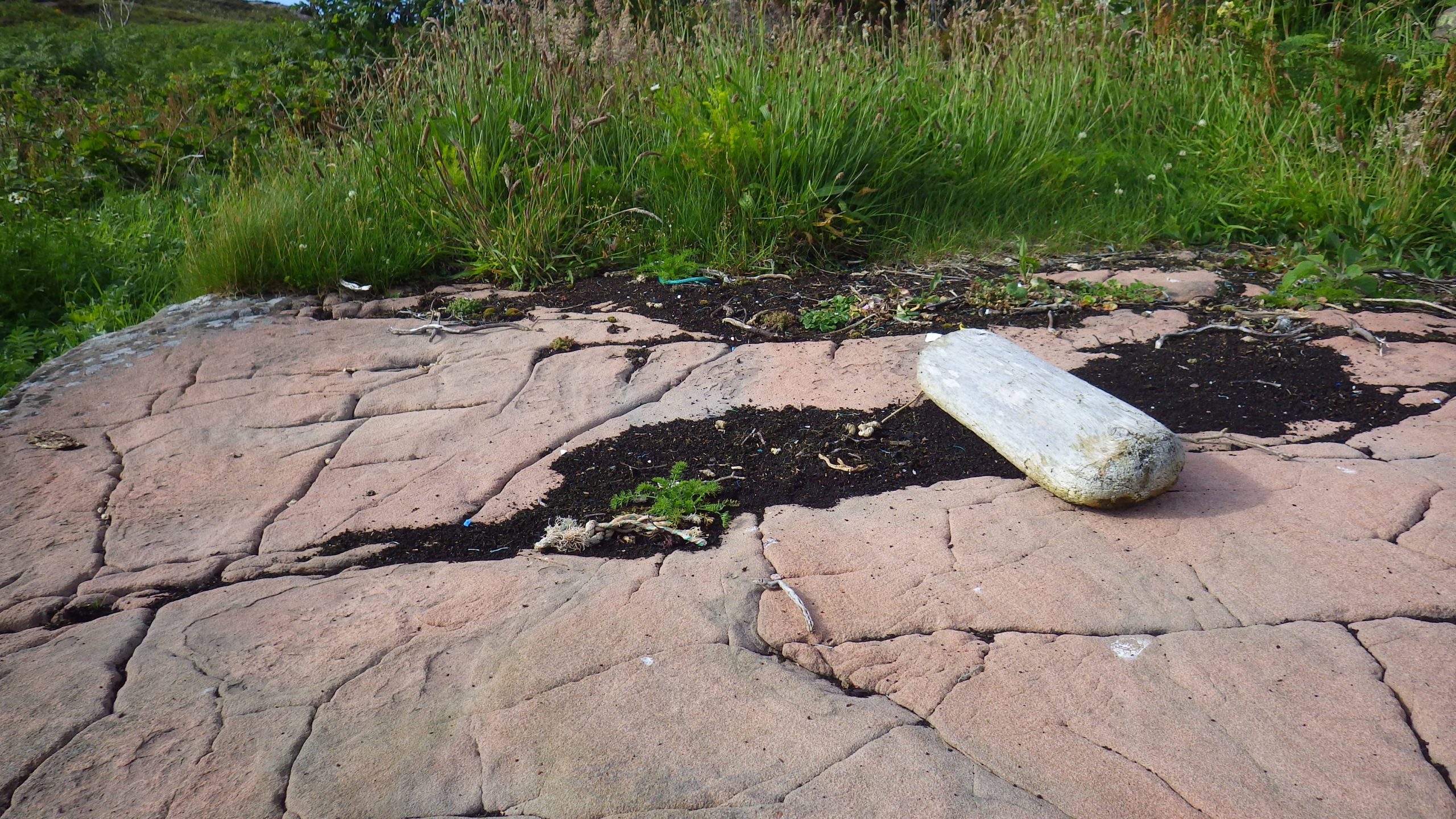 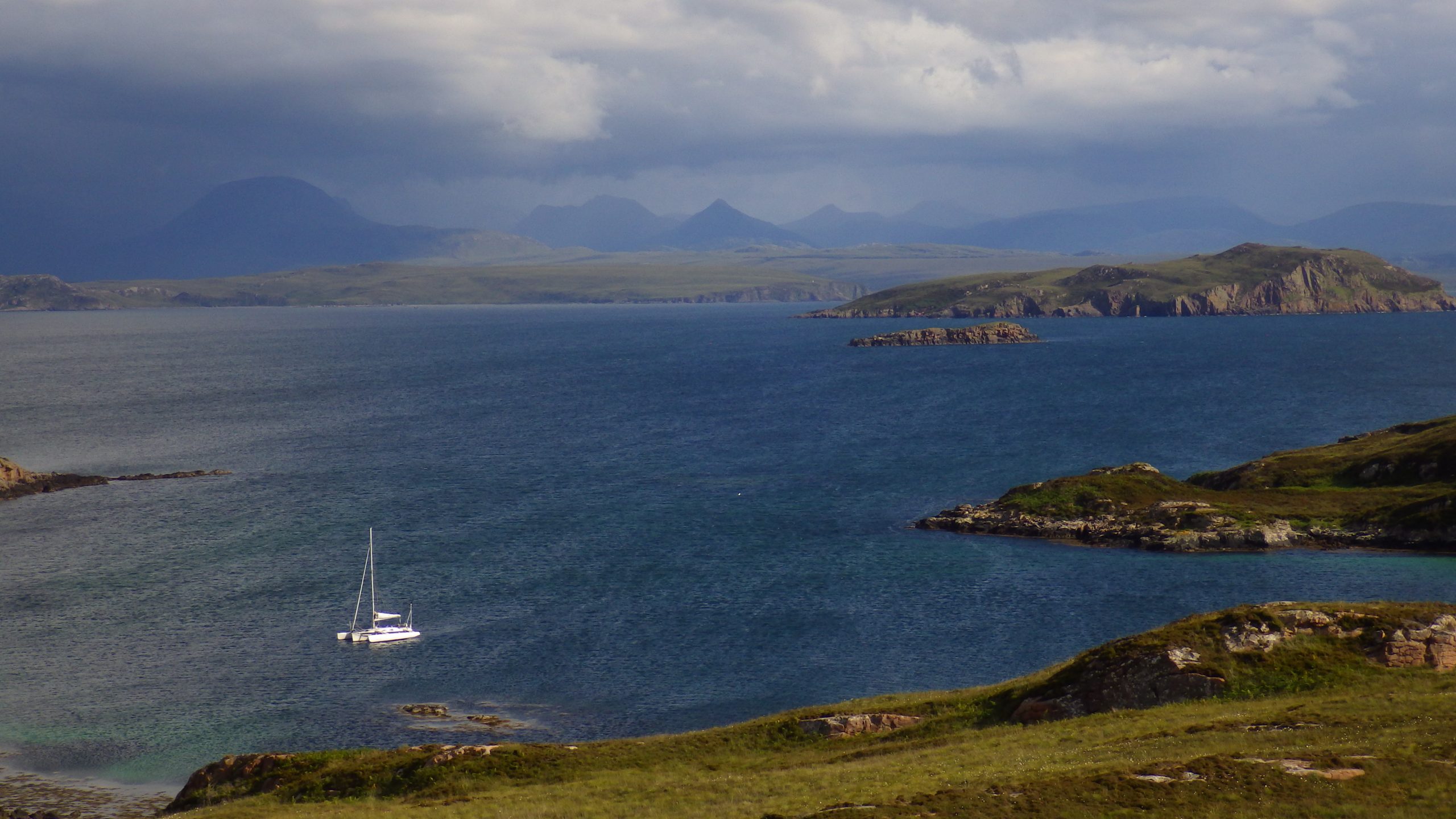 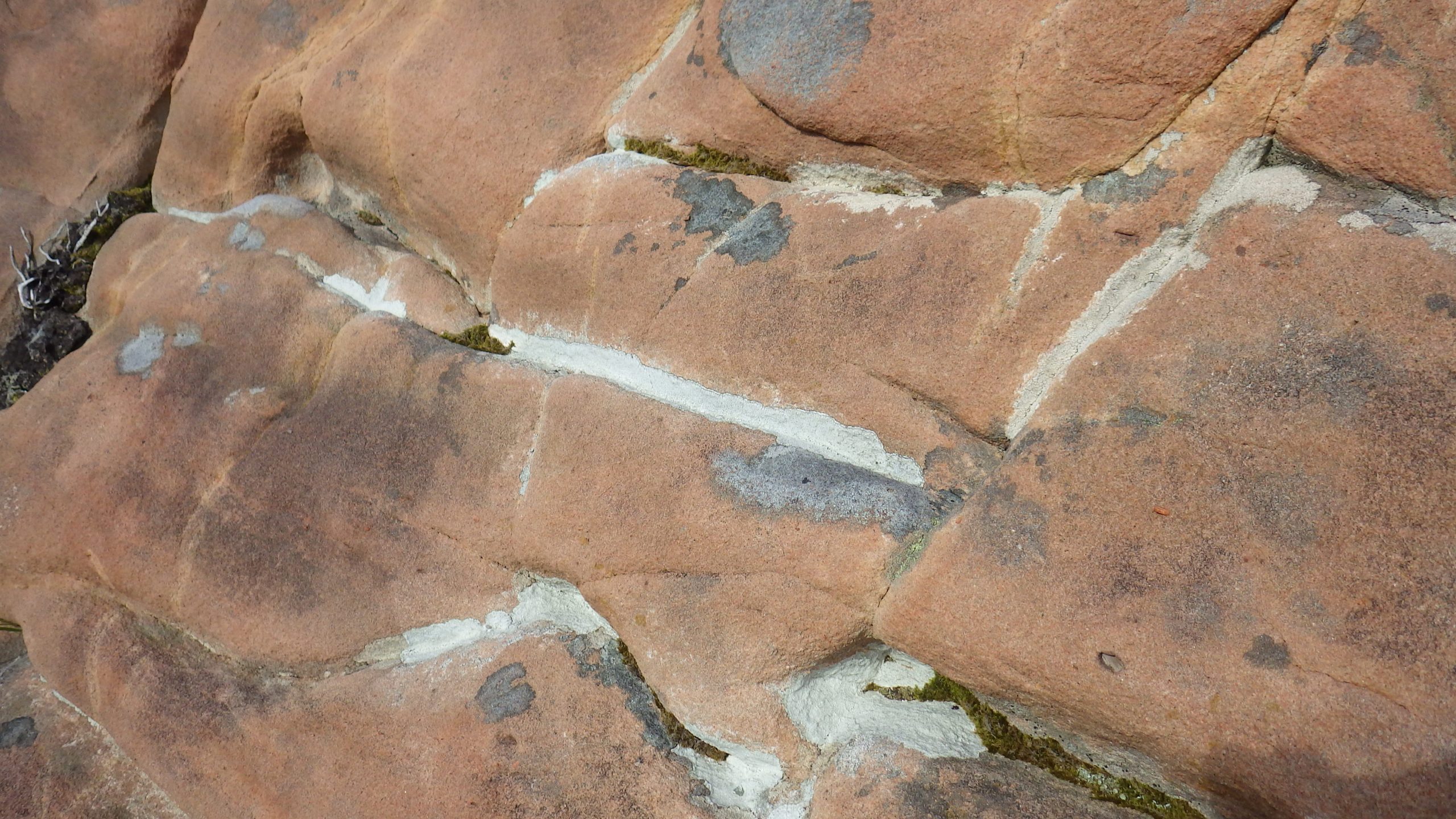