Gruinard, a stunning beautiful Scottish island abused and made infamous as ‘Anthrax Island’. After some hesitation the landing was a wonderful day on an un-grazed and wild island that hid its terrible past.

Gruinard, poor Gruinard. During the second world war scientists took the crazy decision to test deadly chemical weapons on the “useless” uninhabited Scottish island. The tests exploded releases of Anthrax on poor defenceless sheep. These mad experiments left the island deadly, contaminated and inaccessible for decades to come. My trip to Gruinard took place on a wonderful sunny day in August 2017. It was a trip that was memorable but also I could not help but feel nervous as I trod the deep grass some 75 years on from the madness.

In 1942, The British government investigated the feasibility of a bioweapons. There weapon of choice was anthrax. A dealer of death!  They recognised that tests would cause long-lasting contamination of the immediate area by the anthrax spores. As a result a remote and uninhabited island was required. Gruinard was surveyed, deemed suitable and requisitioned from its owners.

Eighty sheep were taken to the island. Bombs filled with anthrax spores were exploded close to where selected groups were tethered. The sheep became infected with anthrax and began to die within days of exposure. Spine chilling footage of the tests are on YouTube video at the foot of this post.

In 1946, the government recognised the danger they had created.  They agreed to acquire the island and to take full responsibility. The owner or their heirs would be able to repurchase the island for £500 when it was declared “fit for habitation by man and beast”.

Gruinard Island was quarantined indefinitely; visits to the island were prohibited. The only exception being for periodic checks by MOD personnel to determine the level of contamination.

In 1981 newspapers began receiving messages with the heading “Operation Dark Harvest” which demanded that the government decontaminate the island.  The papers reported that protestors had landed on the island with the aid of local people and collected samples of soil.

In 1986 a determined effort was made to decontaminate the island. 280 tonnes of formaldehyde solution diluted in sea water was sprayed over all 196 hectares of the island. The worst-contaminated topsoil around the dispersal site was removed. A flock of sheep was then placed on the island and remained healthy. Miners used Canaries, the MOD used sheep!

On 24 April 1990, after 48 years of quarantine and four years after the solution was applied the island was announced as safe. All warning signs were removed. On 1 May 1990, the island was repurchased by the heirs of the original owner for the original sale price of £500.

My visit to Gruinard was at the end of a fast sail from Ullapool. The island is not blessed with any great anchorages and only accessible for short visits on reasonably calm days.

Trade Winds was anchored to the south of the island in behind a spit of boulders and stone called Sron a’ Mhoil . The little bay sits under the point Aird nan Caorach (sheep or livestock point). The name confirming that the island served as pasture land after a short swim of livestock from the nearby mainland estate. The short row from Trade Winds landed me on a boulder beach of bleached stone.

Beyond that was a green and verdant lush island of grasses and bracken. On looking higher up the hill bands of heather and bare stone were clear to see.

I set off to the top passing a ruined stone building that I recognised from the old MOD footage. Beyond that I was soon into an area of spongy, deep sphagnum moss. Each step saw my lead foot sink down almost to knee level. It was a struggle to make the 200 meters or so across the wonderful unspoilt and un-grazed area.

After a real slog I stepped onto firmer ground of grass and heather. The slope up to the summit, An Eilid (The Hind) was gradual. The higher up the slope the soil thinned to reveal areas of bare sandstone speckled with mosses and lichens.

The cairn, like so many on uninhabited remote islands was bearded in lichen.  The top offered uninterrupted views away to the distant Herbrides to the west. To the east into Gruinard Bay and the extreme mountains of the mainland. To the north lay Loch Broom and the Summer Isles. Away in the distance the magic of Wester Ross Geopark and the missives of Coigach, Stac Pollaidh and the ancient sandstone monuments to Scotland’s ancient past.

I chose to take a route down that took be to the north shore and did involved a very precarious and steep drop down to the beach. Slabbed rock lay tilted and buckled along the waterline. It was a scramble up and over the obstacles until I emerged back onto the boulder spit.

What a wonderful experience Gruinard had been. Nervous of its tarnished history but bowled over by its rough, un grazed and wild terrain. and views to the Summer Isles and beyond.

Anchorage: Trade Winds was anchored south of the Sorn A’ Mhoil spit at the south east corner of Gruinard. The anchor held well in a light breeze in 10m of water and came up clean of weed. The bottom shoals to the point and main shore line. The bay does not offer any real protection from a westerly of any real strength and is exposed to swell. Perhaps good for a lunch stop or a scamper to the top! 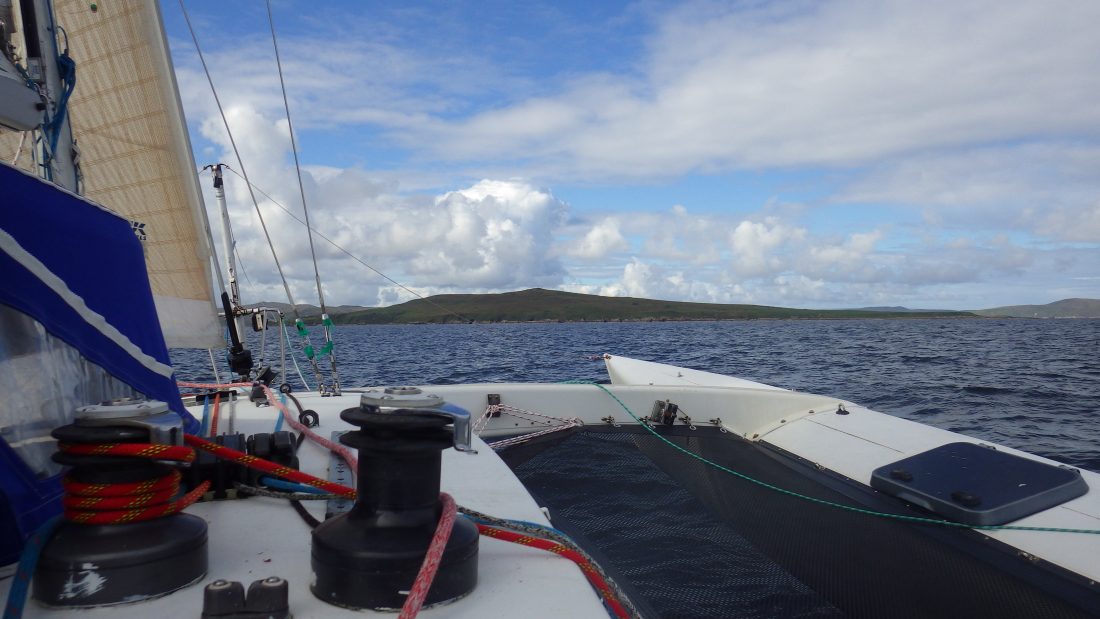 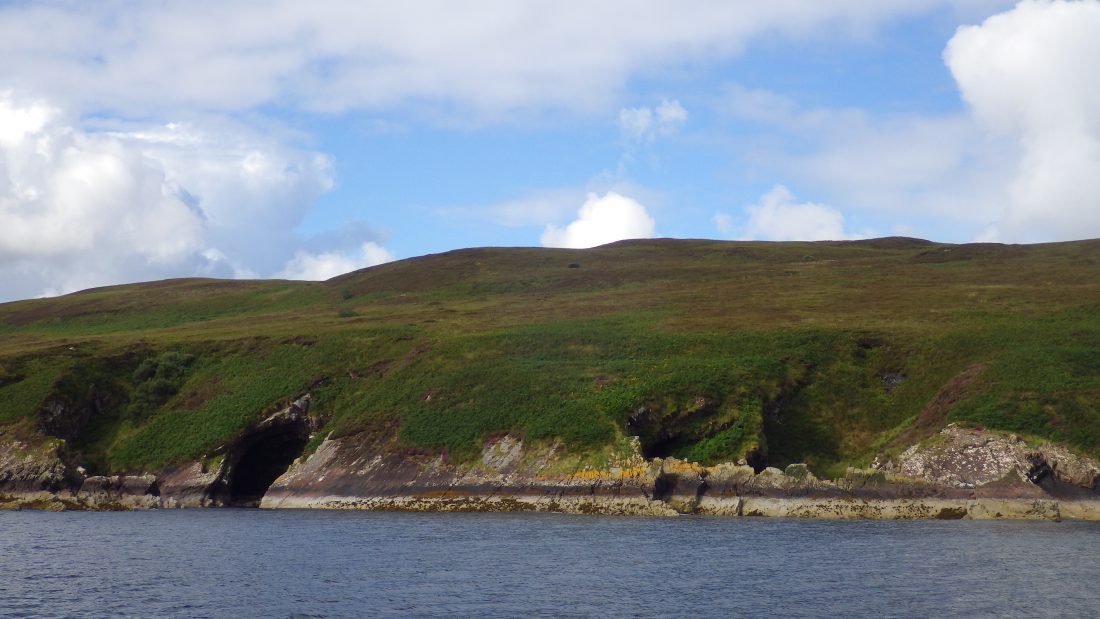 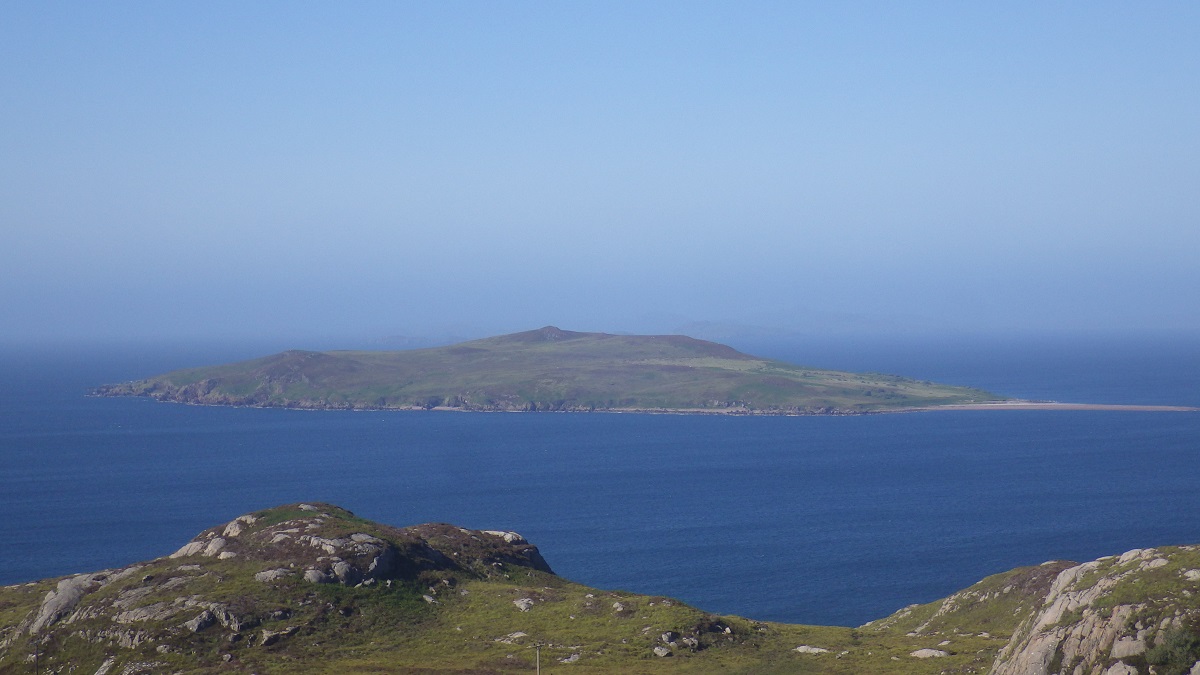 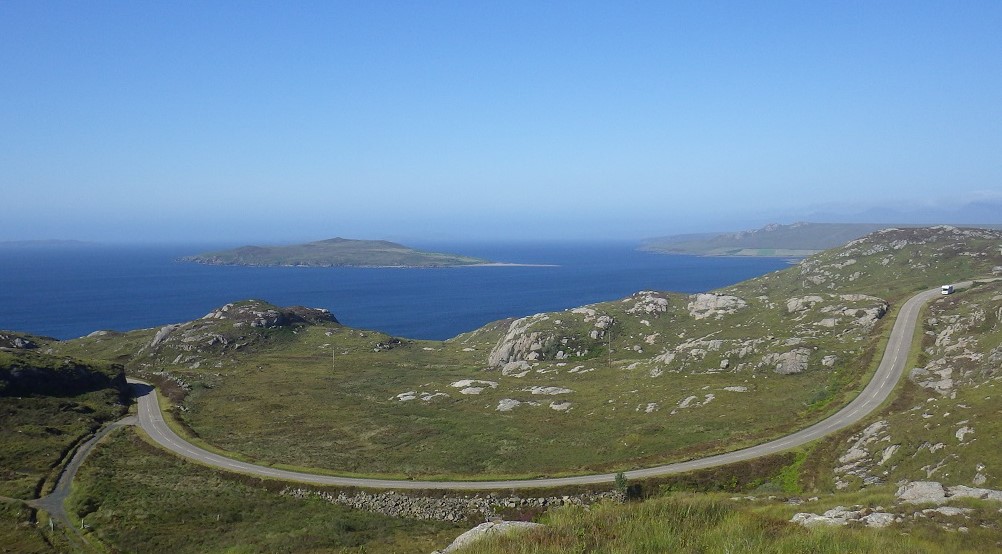 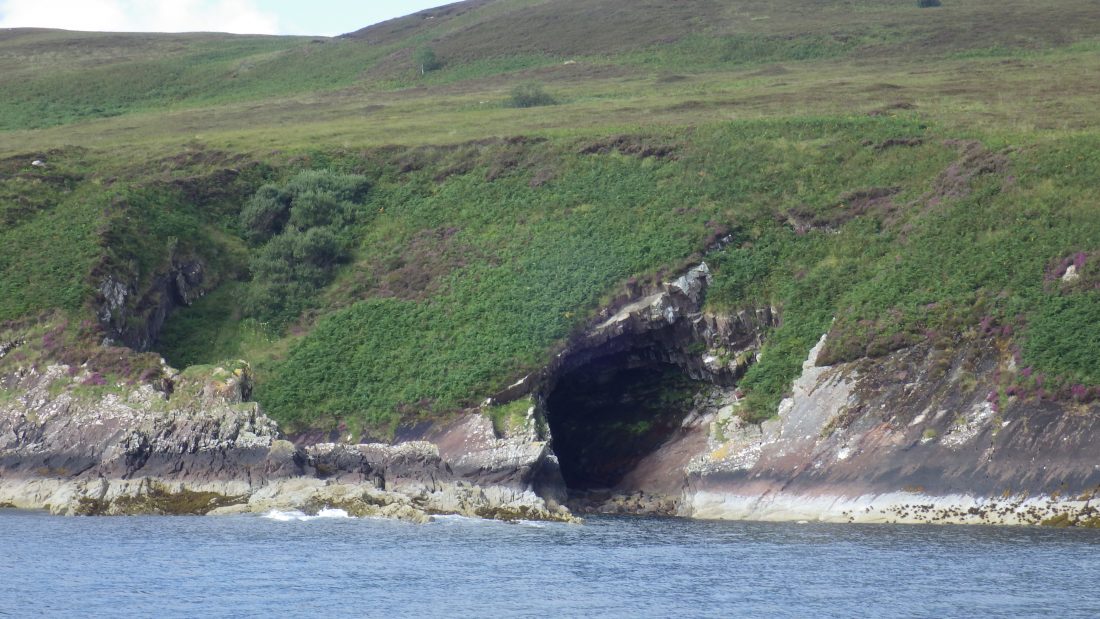 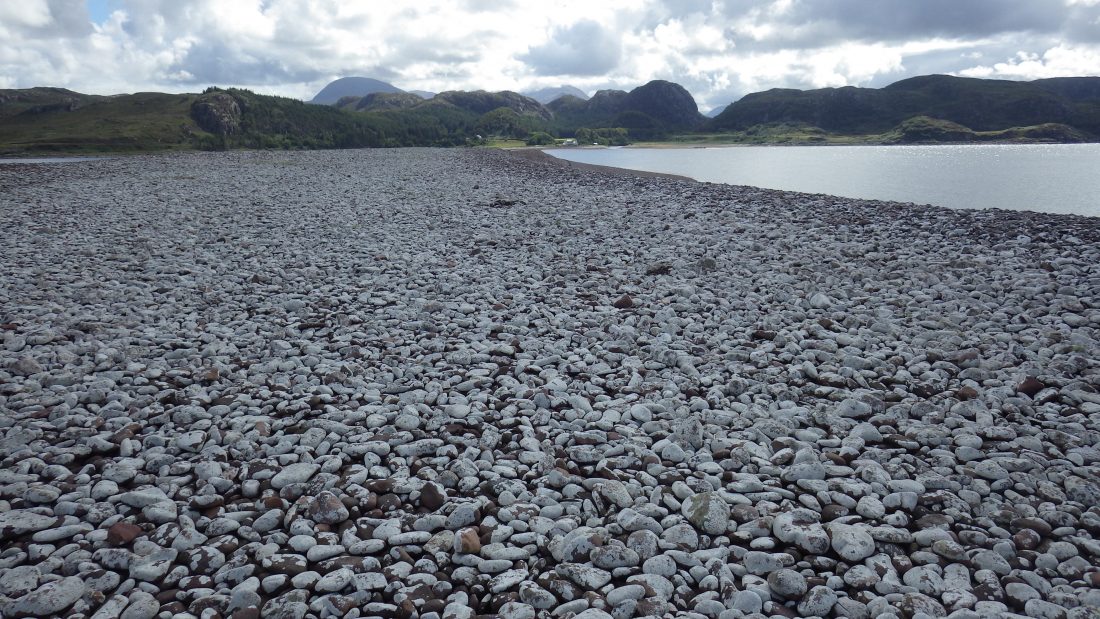 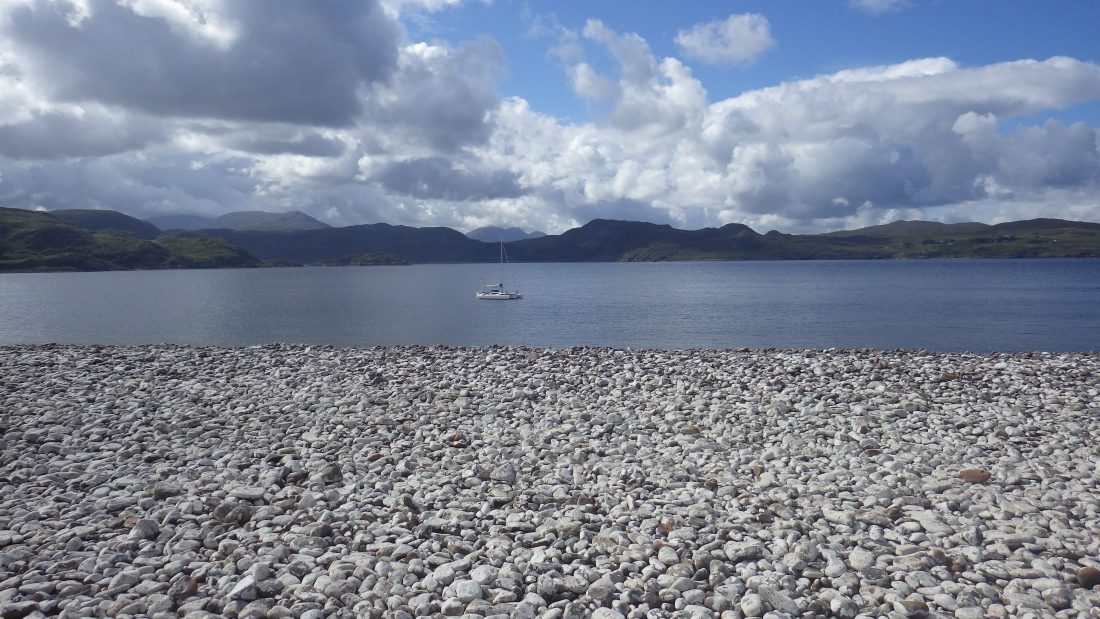 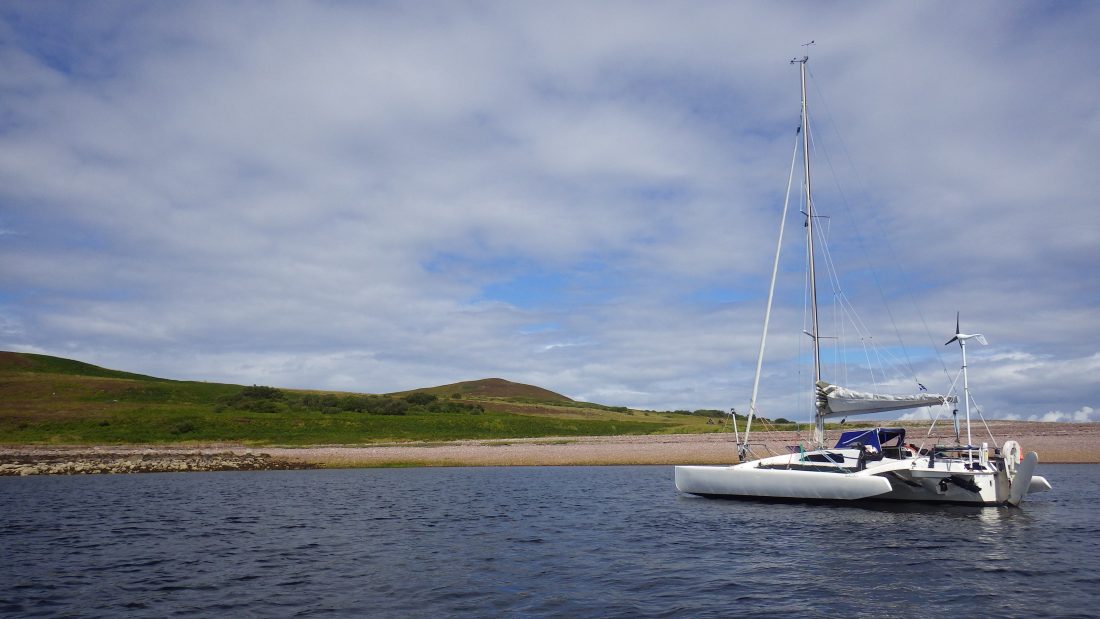 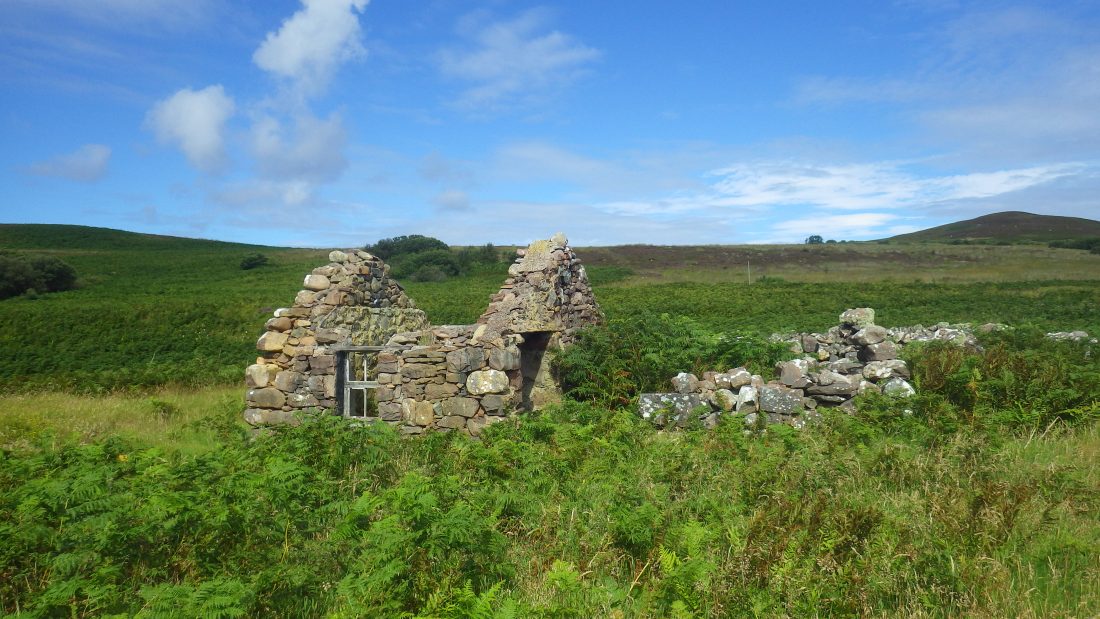 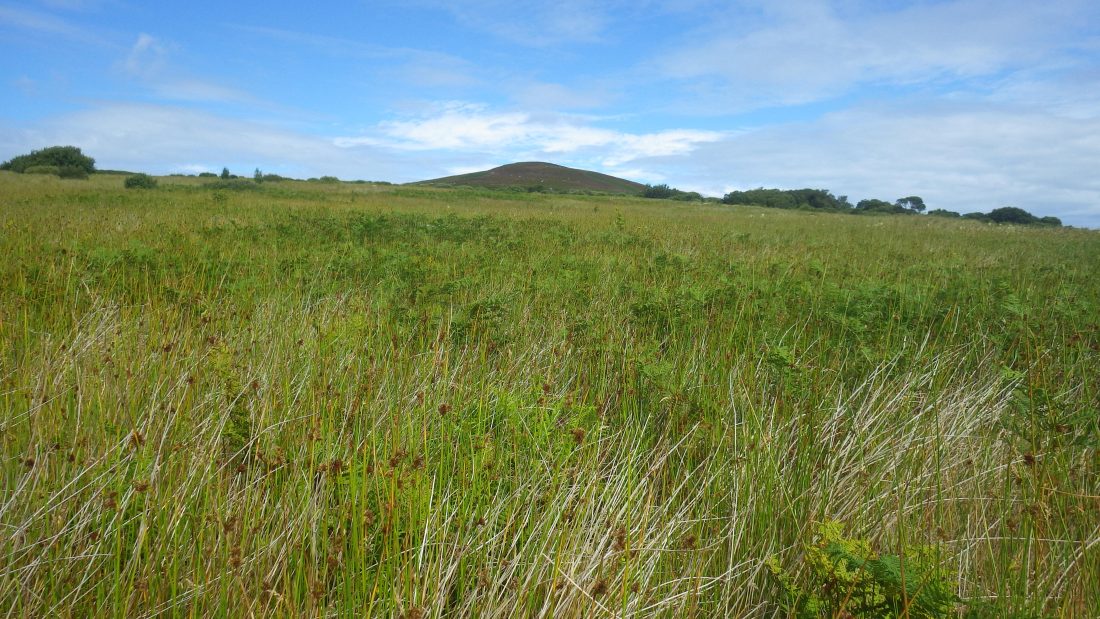 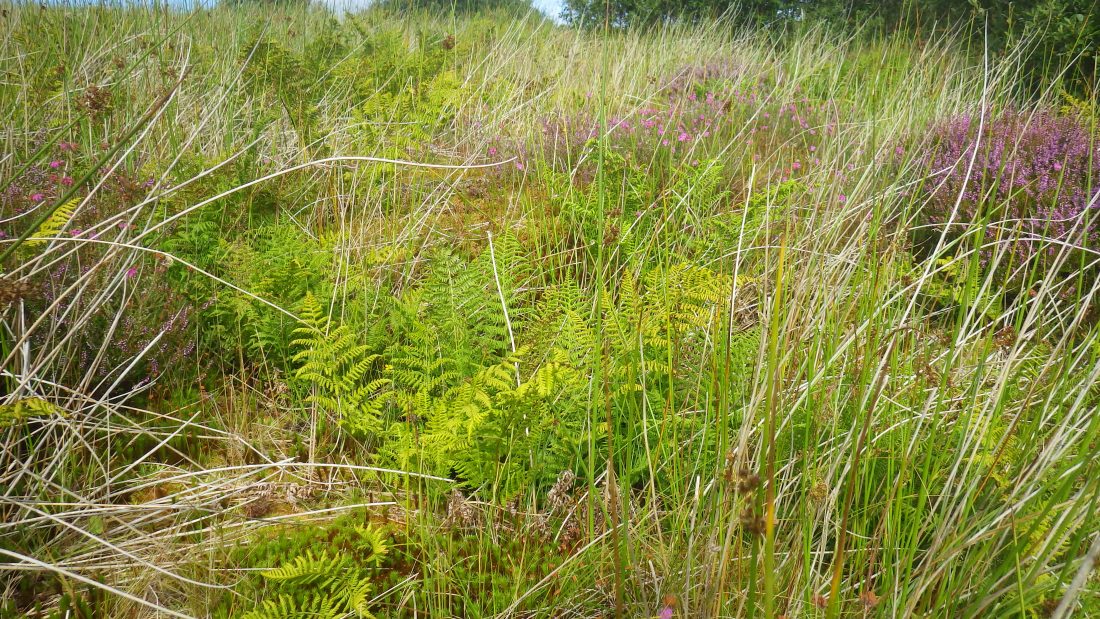 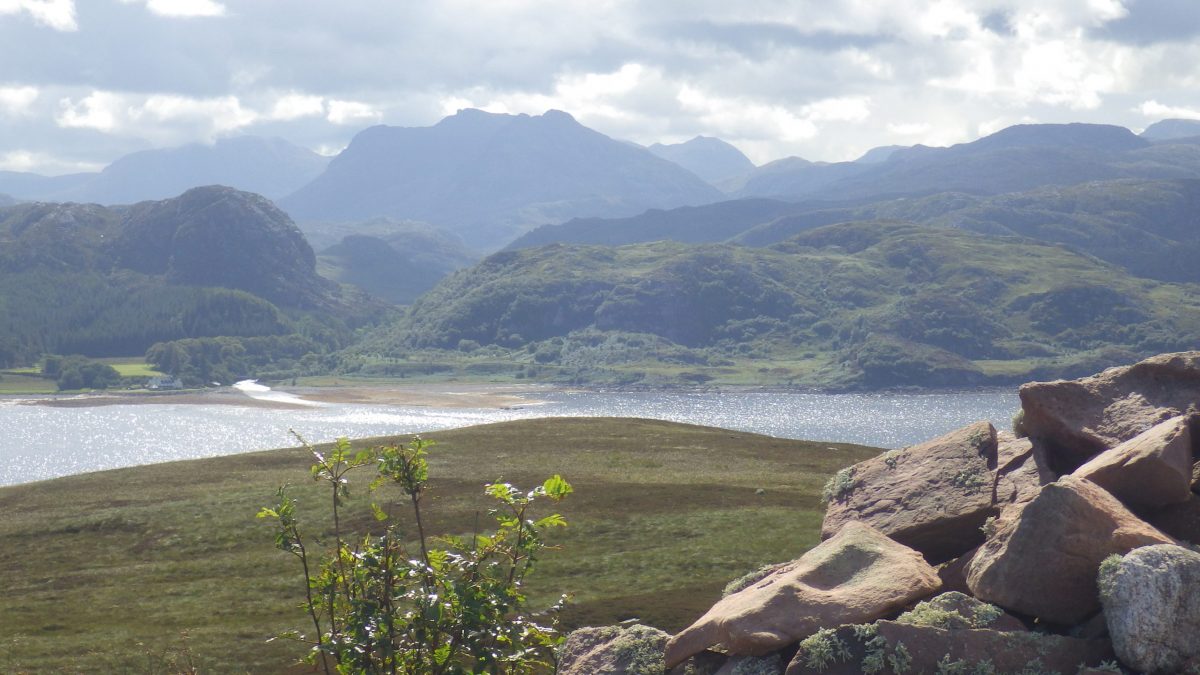 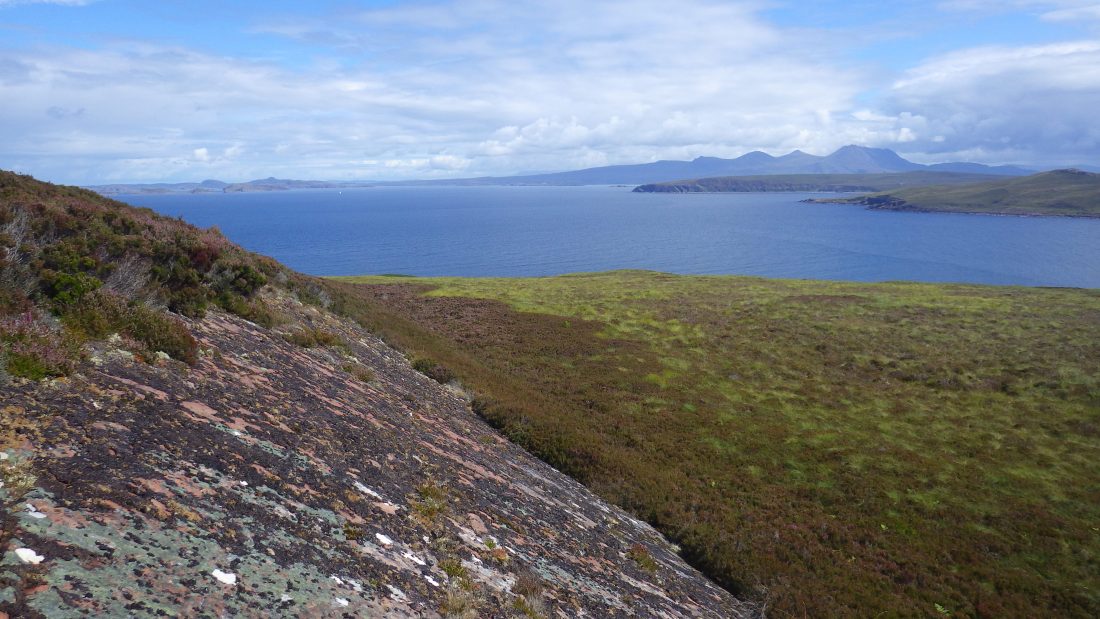 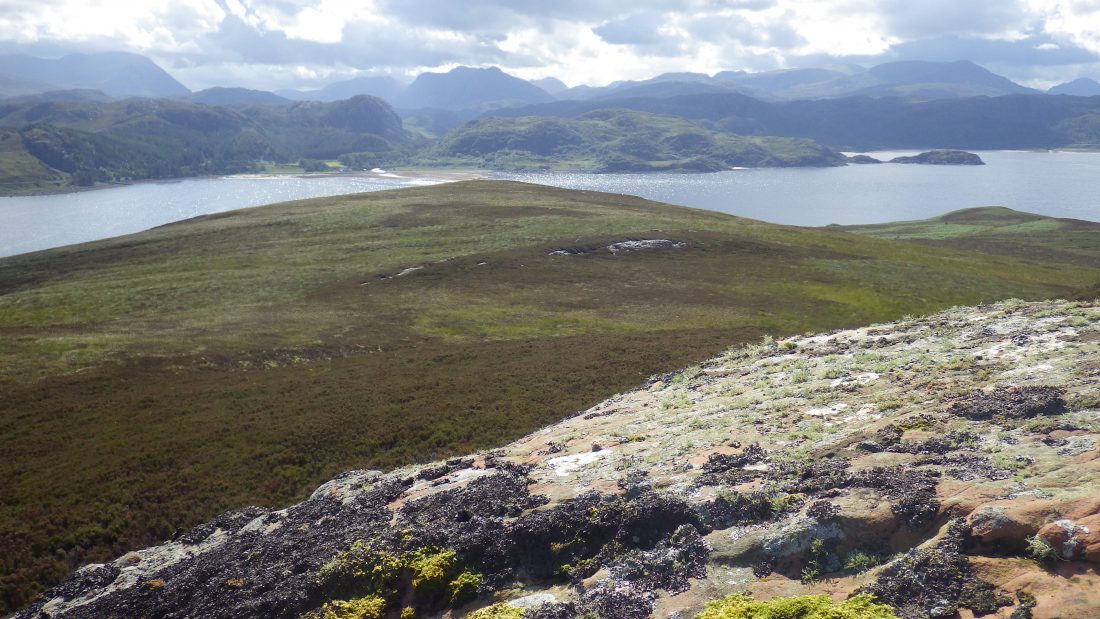 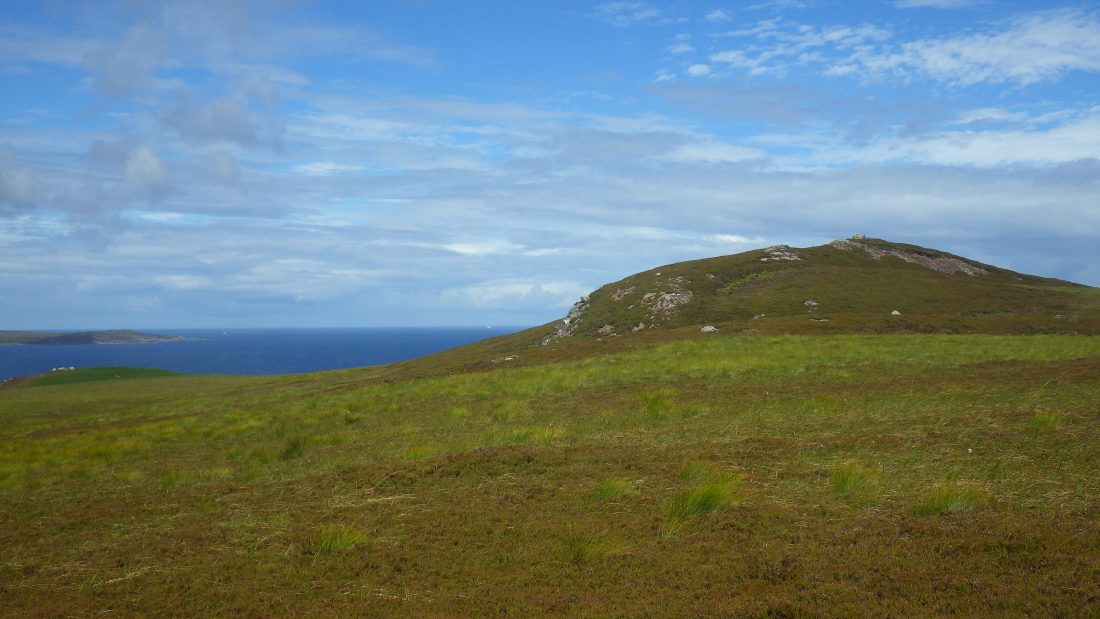 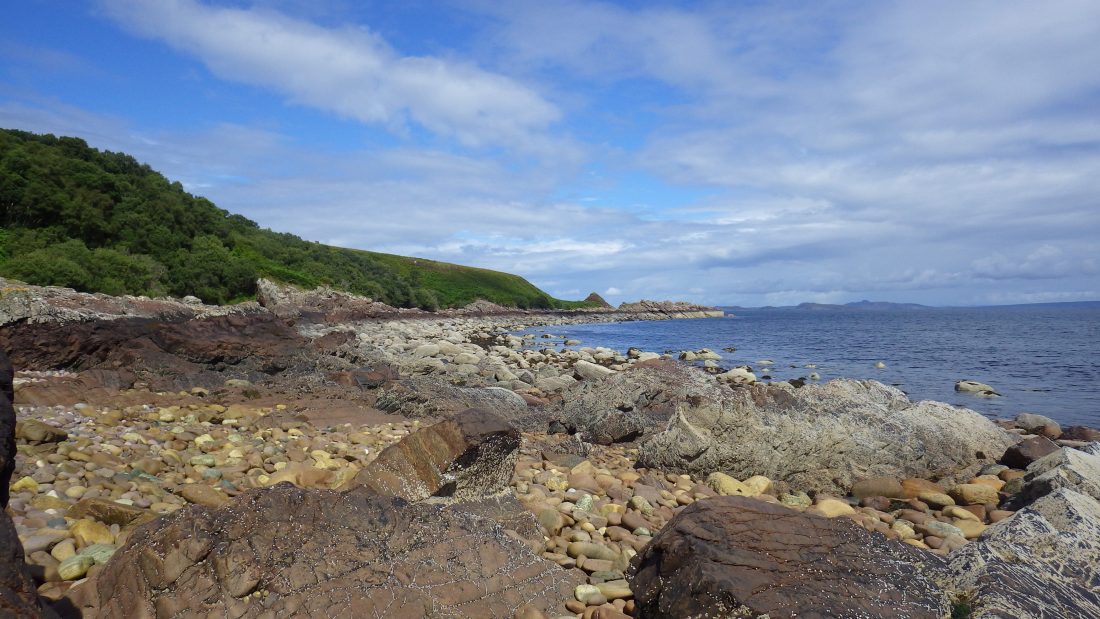 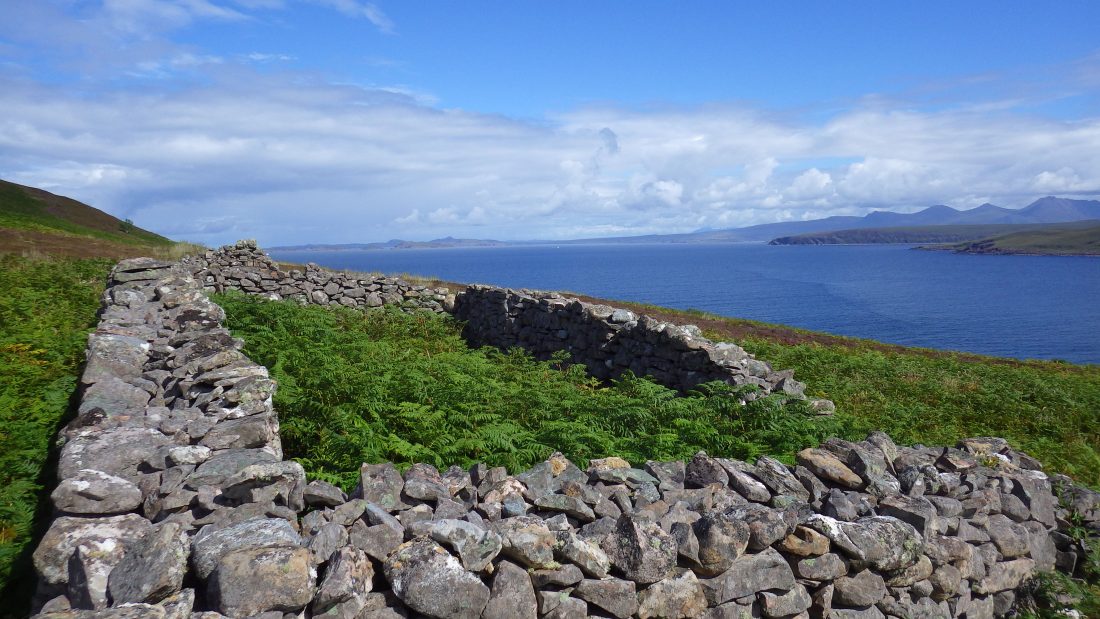 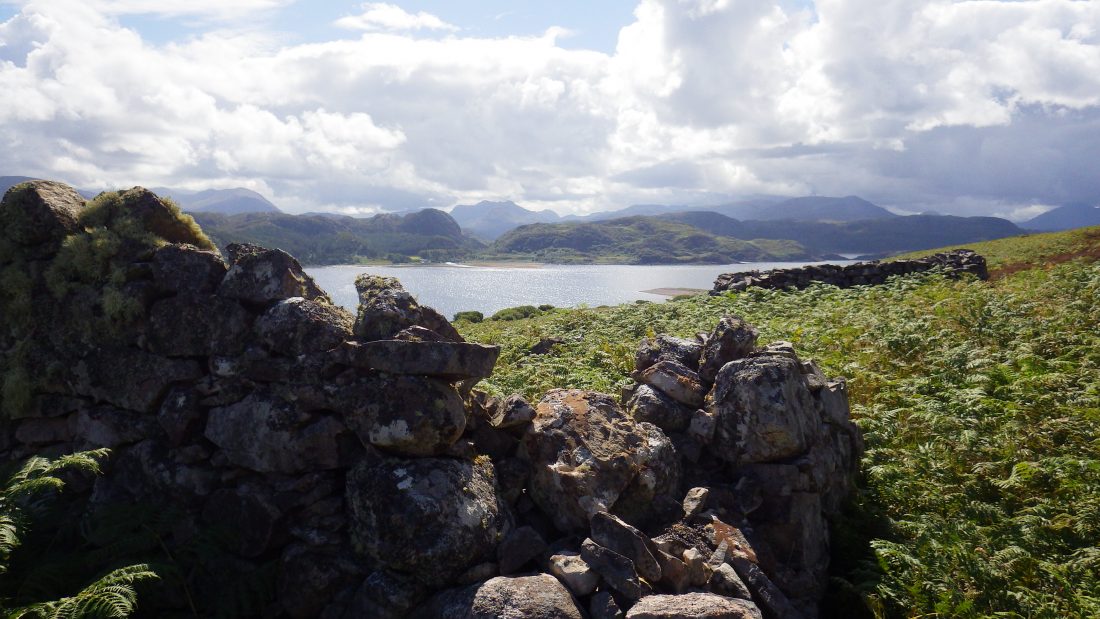 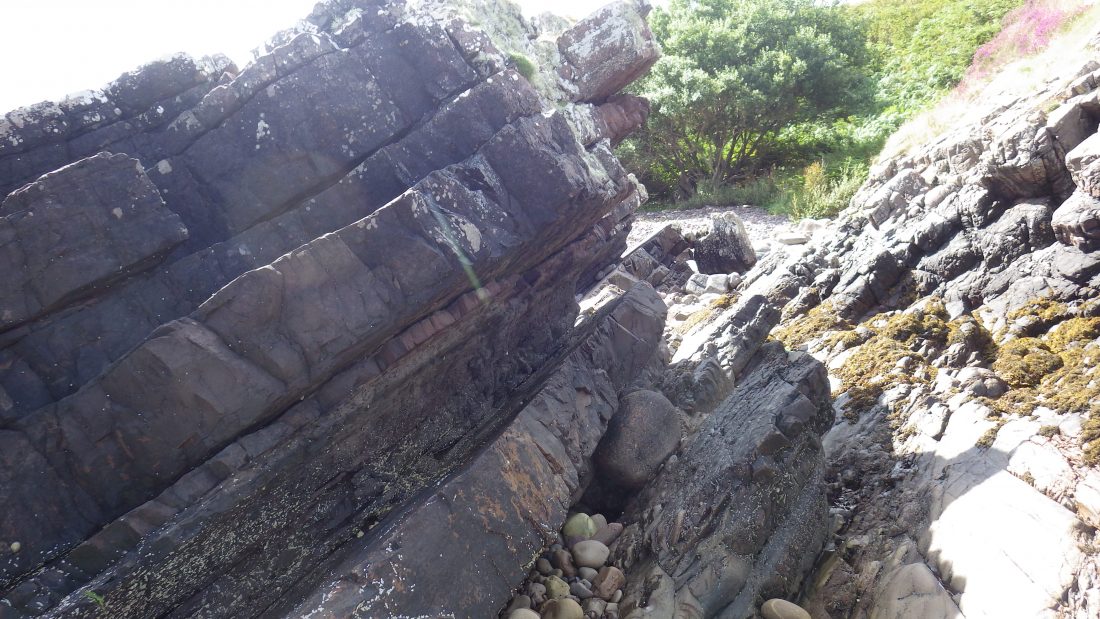 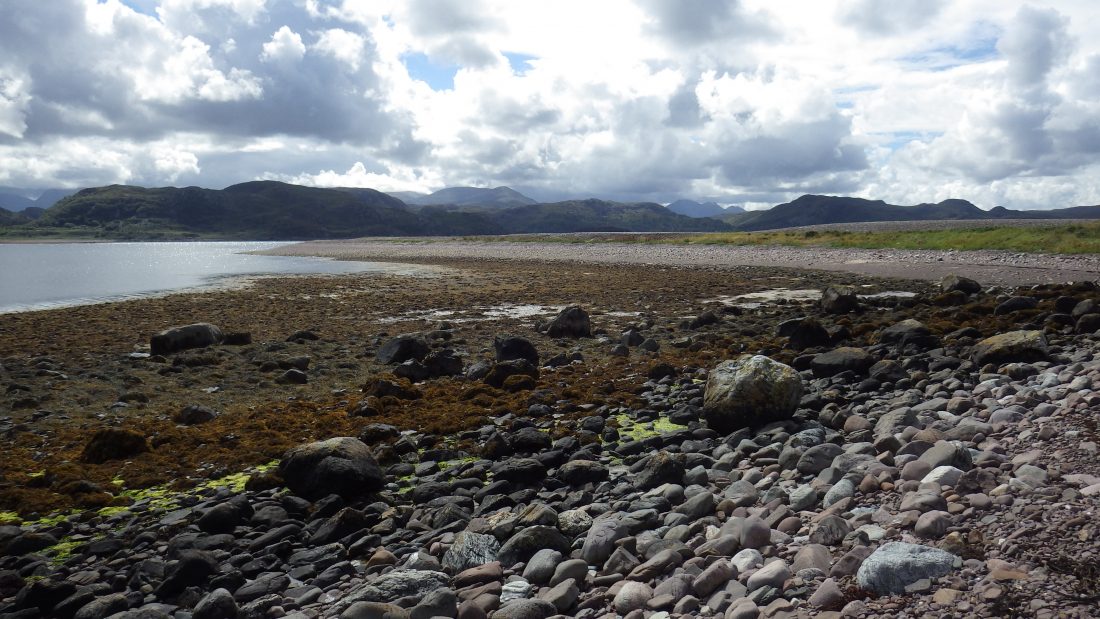 Gruinard today and 360 view from the top